Ontario forward and captain Brett Sutter has been named as the 2018-19 recipient of the Fred T. Hunt Memorial Award, given to the AHL player who best exemplifies the qualities of sportsmanship, determination and dedication to hockey.

Sutter is in his second season as captain of the Reign, his fifth overall in the AHL as a team captain, and recently played in his 800th AHL regular-season game. The Viking, Alberta native also reached the 20-goal mark for the first time in his professional career with his tally last Sunday against Tucson.

The Reign will honor Sutter prior to tonight’s game against Stockton with a short ceremony.

SPRINGFIELD, MA – The American Hockey League announced today that Brett Sutter of the Ontario Reign is the 2018-19 winner of the Fred T. Hunt Memorial Award as the AHL player who best exemplifies the qualities of sportsmanship, determination and dedication to hockey.

In his second season as captain of the Reign and fifth overall wearing the “C” for an AHL club, Sutter has continued to be a model of professionalism and leadership in this, his 12th professional season. The 31-year-old Sutter reached the 20-goal plateau for the first time in his career in 2018-19, adding 24 assists for 44 points to match his highest output since 2013. On Mar. 12, Sutter – who has played in 269 of his teams’ 273 games over the last four seasons – became just the 39th player in AHL history to appear in 800 career regular-season games.

A native of Viking, Alta., Sutter is one of nine members of his family to play in the NHL, along with his father Darryl, five uncles and two cousins. Sutter was originally drafted by the Calgary Flames in 2005 and has totaled 153 goals and 212 assists for 365 points in 811 games over his AHL career in Ontario, Iowa, Charlotte, Abbotsford and Quad City, along with two goals and eight assists in 60 NHL contests with Minnesota, Carolina and Calgary.

The Reign will honor Brett with an on-ice ceremony prior to tonight’s game against Stockton. 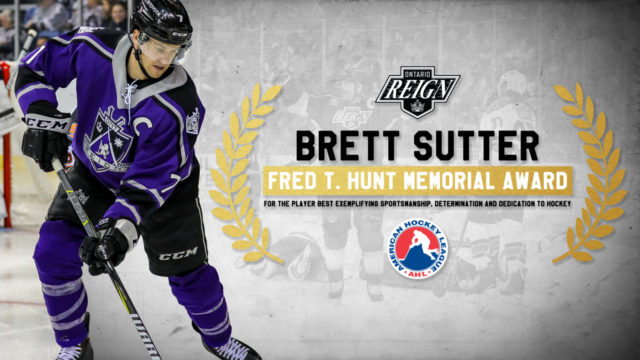