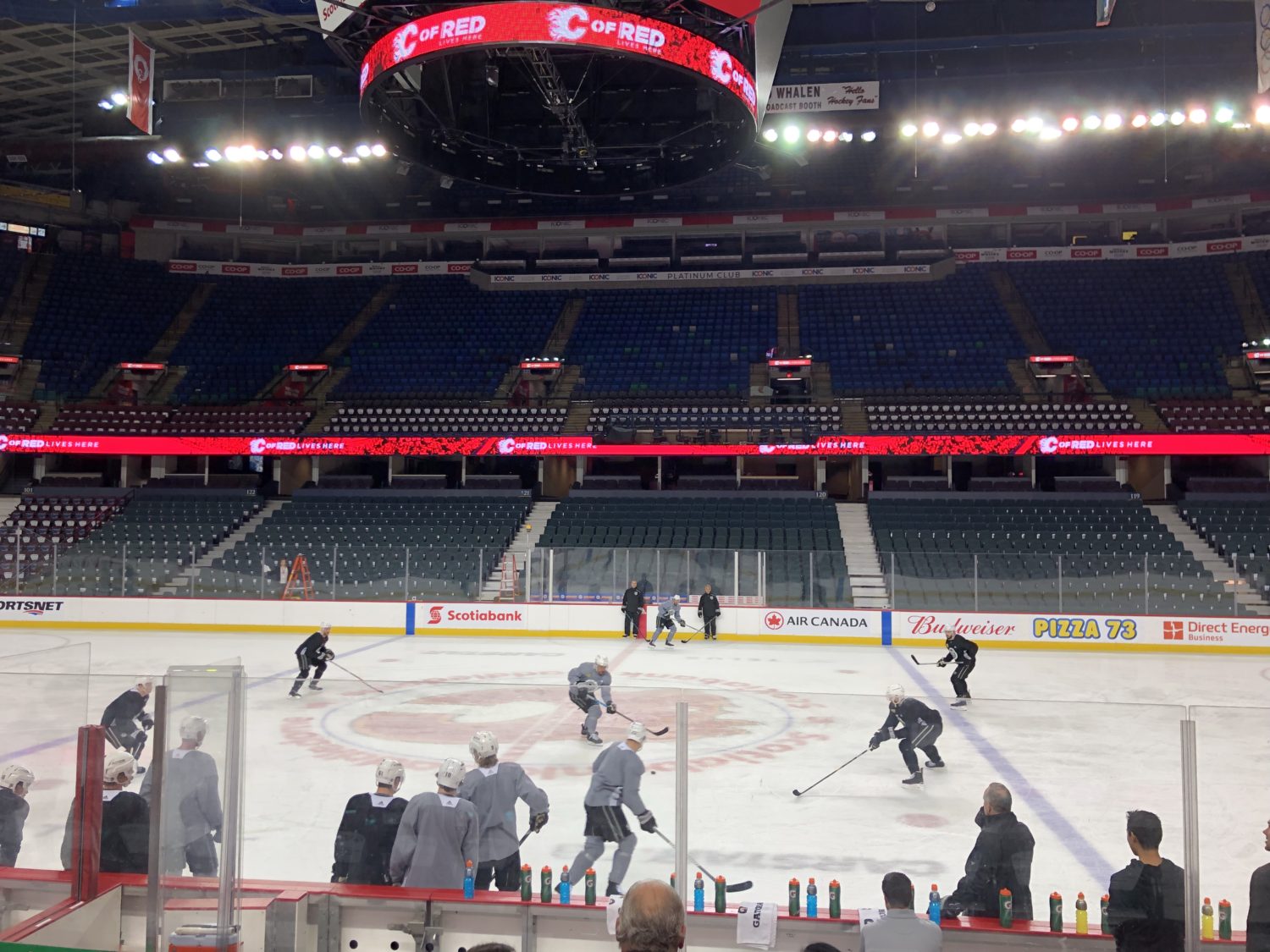 INSIDERS. So, there was some news today. Let’s get started. The LA Kings skated at the Scotiabank Saddledome at 11:30 a.m. and aligned thusly:

— The vitals: Jack Campbell left the ice first and is the projected starter in net. He’s faced Calgary once in his career and stopped 35 of 36 shots in a 1-0 loss on November 10. Michael Amadio and Paul LaDue remained on the ice for extra work and are not projected to play, indicating Willie Desjardins will again run with 11 forwards and seven defenseman tonight. (For those wondering, Amadio’s call-up is a standard recall, not an emergency call-up, as confirmed by hockey operations.) Ilya Kovalchuk did not travel with the Kings and will skate at home rather than play on this trip. More on that in a moment.

— Their vitals: David Rittich is under the weather today, clearing the path for Los Angeles to face familiar foe Mike Smith, who is 18-9-2 in his career against Los Angeles with a 2.26 goals-against average, a .929 save percentage and two shutouts in 30 games. Calgary averages 3.57 goals per game, a scoring rate bested only by Tampa Bay. They’ve outscored their opponents 169-136 in five-on-five play and 109-58 in third periods. They’ve averaged 4.71 goals per game over their 6-1-0 stretch. Five players have recorded at least 70 points on the season with seven games to play. Via Sportsnet 960’s Pat Steinberg, they should line up with Gaudreau-Monahan-Lindholm, Tkachuk-Backlund-Frolik, Neal-Jankowski-Czarnik and Mangiapane-Ryan-Hathaway up front and Giordano-Brodie, Hanifin-Hamonic and Fantenberg-Andersson on the back end. They’re being cautious with Sam Bennett (upper-body), who has a minor injury and won’t play tonight.

Oh, and there’s this:

Drew Doughty just teed off on Matthew Tkachuk, who he'll face tonight: "No respect for him, none. I respect everyone else. I’ll never talk to him off the ice. … He’s not respected by most of the people in the league, it’s not just me – that’s just a fact." Full story to follow

Doughty also praised Norris Trophy favorite Mark Giordano during the scrum, according to Sportsnet’s Ryan Leslie, but yeah, those comments will draw some attention. Tune in to see what should be an emotional game between a pair of divisional rivals who’ve rubbed each other the wrong way in recent seasons.

–Ilya Kovalchuk didn’t travel with the Kings this week. Per Rob Blake, he remained back in Southern California, where he’ll get additional on-ice work with the team’s development and skills staff at Toyota Sports Center. That often happens when a player is coming back from an injury and isn’t quite ready to travel, and Brendan Leipsic (lower-body) will also skate with the on-ice group. That doesn’t apply to Kovalchuk, who is healthy but has been held out of the lineup for three of the last four games.

On the surface, the timing seemed particularly questionable because of Kovalchuk’s comments to The Athletic and the LA Times last week disparaging the opportunity afforded by Desjardins since the coach’s November arrival, but Blake didn’t give any indication that there were ulterior motives behind the decision to keep the forward home and forcefully shot down the suggestion that it was based on any sort of punitive measure, saying, “he wants to get better.”

Update :
We (myself and @lakingsinsider ) asked Rob Blake if this was done because of the Kovalchuk comments
Blake said emphatically that was not the case. https://t.co/D17FKZY0fx

The decision was apparently based on a conversation Kovalchuk had with Blake with the context that it wasn’t expected that he’d play on the three-game road trip, which continues Tuesday in Edmonton and concludes Thursday in Vancouver. “That’s what he wanted. He came up with the idea,” Blake said.

With it shaping up that he wouldn’t likely get into any action on the trip, and with the lack of practice time during the three-in-four stretch, the impetus behind the agreement, per Blake, was to provide Kovalchuk the “best possible times he could work on our game, and that’s what we came up with.” As noted, the Kings will use the 11/7 forward/defense alignment tonight, the third game in a row Los Angeles substituted an extra defenseman for a forward.

“We’ve been playing seven D quite a bit, and for him to come on the road, he’s not going to get a lot lof ice time with practice – we don’t have a lot of practice time,” Willie Desjardins said. “[We] just felt it was better he might as well stay back and work on his stuff. It doesn’t mean we’re always going to play seven D, but we have had some success with seven D.”

This wasn’t the first time the idea of such an arrangement had been proposed. “We had briefly talked about it before, but [Kovalchuk and Blake] sat down and talked and just felt that was probably the best thing moving ahead,” Desjardins said.

There isn’t a great deal of precedent with such a decision, though so many of this season’s coarse and uncomfortable moments have defied recent precedent.

Whether Kovalchuk will play again this year will be based on circumstances and context that isn’t quite available now. “It just depends how we’re playing and what’s happening with everything. I’m certainly not against that,” Desjardins said. “It’s not something I would rule out, but we’ll just have to see how things play out.”

— Oscar Fantenberg flew under the radar as a trade deadline acquisition, but he’s been steadily doing in Calgary as he did in Los Angeles: going about his business without much fanfare or attention, and drawing praise from his coaching staff for doing so.

“He’s been real good,” Flames coach Bill Peters said. “We knew what we were getting when we acquired him. He’s a guy who plays heavy. A veteran guy, a little bit older, we were really young back there. Obviously our three-pair’s been rookie-rookie throughout the year, basically, especially with Stoney’s injury. He comes in, he’s got some experience and good chemistry right now with Andy, so it’s been a really good pair for us.”

To hear Fantenberg re-tell the story of learning about his trade in Tampa because of persistent knocking at his door that interrupted his pre-game nap – he thought it was the cleaning lady before realizing it was a member of the team’s staff after checking his phone and seeing he’d missed two calls from Blake – you can click here for our conversation this morning.

But he’s now acclimated in Calgary, where he has one assist and a plus-four rating in 10 games and has appeared in eight games in a row, six of which were wins. He credited his defensive partner, Rasmus Andersson, at helping him get comfortable to craft a role to the best of his ability.

“Well, Tre Kronor, right? It’s in the blood, so now you’ve just got to get the reps,” Peters said.

Fantenberg had a smile on his face when asked about the emotional stakes of Kings-Flames games and going against his ex-teammates for the first time. “You don’t want to lose any battles out there, that’s for sure,” he said.

In 56 games overall, Fantenberg has two goals, four points and a plus-two rating.

“He was a big part of our team, and to lose him hurt us,” Desjardins said. “He’s undervalued a lot of times because he’s not flashy, but he’s really steady and does a lot of good things. He’s a great teammate, so it’ll be different with having him on the other side, but for him, I think he’s found a good fit, and for his sake, I hope things go well for him.”

— More to come from Calgary, Insiders. I’ll be joined by Alec Martinez on the bench before the game and will join Patrick O’Neal during the second intermission to talk about several Los Angeles NCAA prospects and free agent targets. We’re planning prospect updates through all three games on this trip, so come for Doughty-Tkachuk, and stay for Cole Hults, Mikey Anderson and many more names you’ll be interested in. Tonight’s officials are referees Jean Hebert and Steve Kozari and linesmen Brandon Gawryletz and Scott Cherrey. Enjoy your Monday, Insiders, and stick taps to the Traveling Queens – who were graciously saluted in the hotel lobby by Blake and Dave Lowry yesterday – for their excellent road support this season. Let’s talk soon.