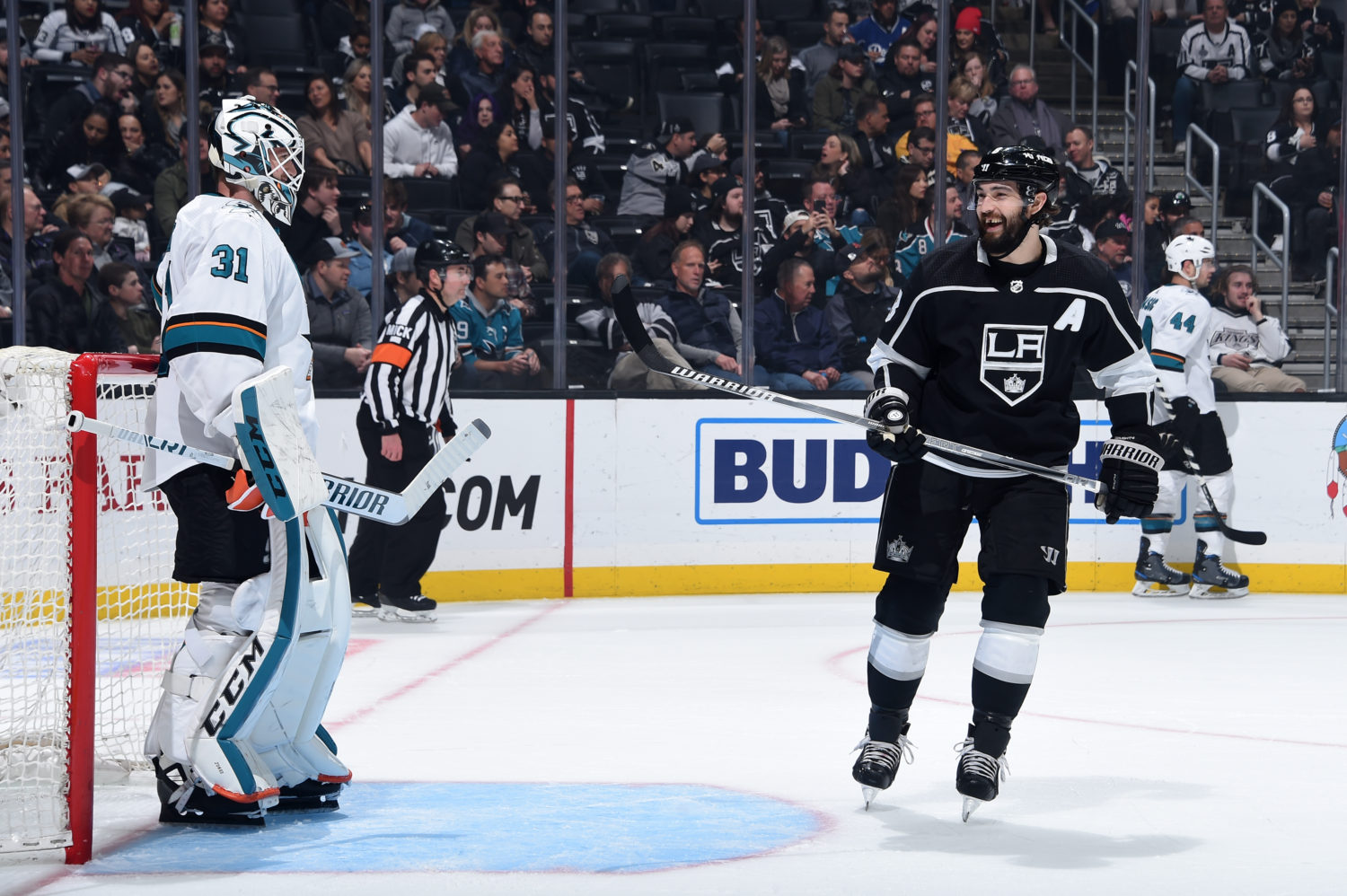 Willie Desjardins, on the team’s performance:
It was good. I thought we had a great start to the game. I thought the guys were ready right from the start. After that, it was just a hard battle throughout. They have a good team, so it was a game we needed everybody, and everybody played hard.

Desjardins, on whether the third period comeback made the game particularly exciting:
I think it does. Whenever you come back, it’s always a good feeling. Especially against that team, because you said that – there’s a rivalry there. And they’re good. Like, they’re a hard team to come back against, so whenever you do that, it’s exciting.

Desjardins, on the positives from the team’s performance, and what led to the good start:
I think we had a lot of energy. Right from the start I think the guys had a lot of energy. I thought we played smart. I thought we got the puck deep so we could get our forecheck established. Whenever we get our forecheck, I think we play better. So, right from the start, we established that, we got on ‘em, we turned some pucks over and we took some pucks to the net. I think the guys were real focused. I thought they were focused, and I think they wanted this game and they played hard to get it.

Desjardins, on any surprise over Matt Roy’s performance and his ability to stay in the lineup:
A little bit, I guess. Whenever you bring a guy up, you don’t know how he’s going to play. I was told good things about him when he was in the minors. I was told he could defend and he’s a good skater, he defended well, and that’s what we saw. He’s come up, he’s good on defending and he can skate well. Right now, he was able to step in and he’s played well for us.

Dustin Brown, on beating a rival in the Sharks:
Winning is a lot more fun than losing. We’ve done a losing this year, so I think we’ve got nine games after this? These should be fun games for guys to play in. We’ve have guys that have got an opportunity to play at this level and most of the teams we’re playing are not in this position that we’re in, but they need points. They’re getting ready to go into the playoffs, so I think it’s a good challenge for these young– not only young guys — but our whole team to compete against teams where the intensity level is high, so it forces us to play well. Like I said at the start, winning is more fun and the way we did it tonight was good.

Brown, on whether tonight was one of the team’s better performances of the season:
Yeah, I thought we played well, but I don’t think we can go too far with this win. They were missing three of their best players in the lineup. They had a lead for halfway through the third and they’re missing their probably, arguably, their top three players or at least top players regardless. So, it was a good game for us and, like I said, it would be good for us to win some down the stretch here.

Brown, on if he received any grief in regards to his goal celebration:
No, I fall down a lot either way.

Brown, on whether Ron Burgundy made an appearance in the locker room after the game:
I saw Will Ferrell, but I didn’t see Ron Burgundy though. So, no, Burgundy wasn’t here.

Brown, on the team gaining momentum off of Roy’s goal:
He’s been playing well for us ever since he’s come up. He’s had some good looks. I knew that, just my position, I knew it had a really good chance of going in. It was kind of a knuckleball, which is probably difficult for the goalie to pick up on and it’s good to see guys like that get their first ones. And like I said, him and Walks have come up and played really well for us.

Matt Roy, on scoring his first NHL goal:
Well, at first, I was just wondering if it hit Brownie in front. But by the way he reacted, I guess it didn’t touch him. I was just excited.

Roy, on turning the game around in the third period:
It felt awesome. We were pushing all night and it just felt good to kind of get some energy and go from there.

Roy, on whether anything was said in the room during the second intermission:
No, just we really wanted to get a win here at home and we felt like we were playing and we just said, ‘Keep pushing, keep pushing. We’ll get one.’

Roy, on the reaction on the bench to him scoring:
I think Brownie or Marty grabbed the puck and everyone was super happy for me, so it was awesome.

Roy, on whether he had been waiting to score his first NHL goal:
You like to get one and you like to contribute and produce, but my style of game, I’m more concerned about defense, so I wanted to keep shooting and hopefully one was going to go in.

Roy, on scoring against one of the club’s biggest rivals:
Definitely. You could feel the excitement in the building tonight, so it was a lot of fun.

Roy, on what the team will take from tonight’s game moving forward:
I don’t know. I think we played well, so I think we’ll try to build off it as best we can.

Roy, on whether he’d had a chance to see his friends’ and family’s reactions to his goal:
No, not yet. I don’t even know if my family saw it. It’s a little late, Eastern Time for them, but maybe tomorrow morning I’ll text them.

Roy, on how long he had been thinking about scoring his first NHL goal:
I think everyone kind of think about it. You kind of want it, but I wasn’t trying to force it or anything. I’m just glad it came tonight.

Roy, on whether scoring his first goal at home makes it sweeter:
Yeah, for sure, especially at home. It was awesome.

–The win was Los Angeles’ first regulation victory when trailing entering the third period. The only other game this season in which they won when trailing after two periods was the 4-3 overtime win at the New York Rangers on February 4.

–The win was the 1,699th regular season victory in franchise history.

–By limiting San Jose to two goals, the Kings held their opponents under three goals for the third time in the last 19 games.

–Dustin Brown (1,108 GP), who moved within three games of Dave Taylor’s franchise record for games played (1,111 GP), registered his 331st career assist on Kopitar’s goal, moving him within two assists from Rob Blake (333 assists) for ninth place on the franchise’s all-time assists list. With his first period goal, he reached the 20-goal barrier for the seventh time in his 15-season NHL career.

–Matt Roy scored his first career NHL goal and now has three points (1-2=3) in the last four games. He totaled two shots, two hits, three blocked shots and a plus-two rating in 17:49 of ice time, 1:30 of which was spent during the team’s two-for-two penalty killing performance. He has played in 16 straight games since making his NHL debut February 9 in Boston.

–With his empty-net goal, Jeff Carter scored his first goal since January 15 at Minnesota, ending a stretch of 20 games he played in without scoring.

–Alex Iafallo (0-2=2) registered his fourth multi-point game and first multi-assist game of the season. He tied his career-high for assists in a game (third time; last: November 7, 2017 at Anaheim).

Brendan Leipsic suffered a lower-body injury during the LA Kings’ 4-2 win over San Jose Thursday night and didn’t return to the game after the conclusion of his final shift with 3:29 remaining in the second period.

As is often the case, more will be learned after Leipsic goes through additional evaluation. “It’s lower body,” Willie Desjardins said. “You’ll always see the next morning more than you see it tonight, so we’ll evaluate in the morning.”

Leipsic, a 24-year-old eligible to become a restricted free agent, has seven goals and 23 points in 61 games. He appeared in 9:21 of Thursday’s win, totaling one shot on goal, two hits and one blocked shot.

It was not immediately clear what caused his injury. Leipsic had previously missed only one game with Los Angeles since being claimed off waivers on December 3, a 3-2 win at Anaheim in which his absence was due to a coach’s decision.

The Kings are scheduled to practice at 11:00 a.m. at Toyota Sports Center on Friday, March 22.