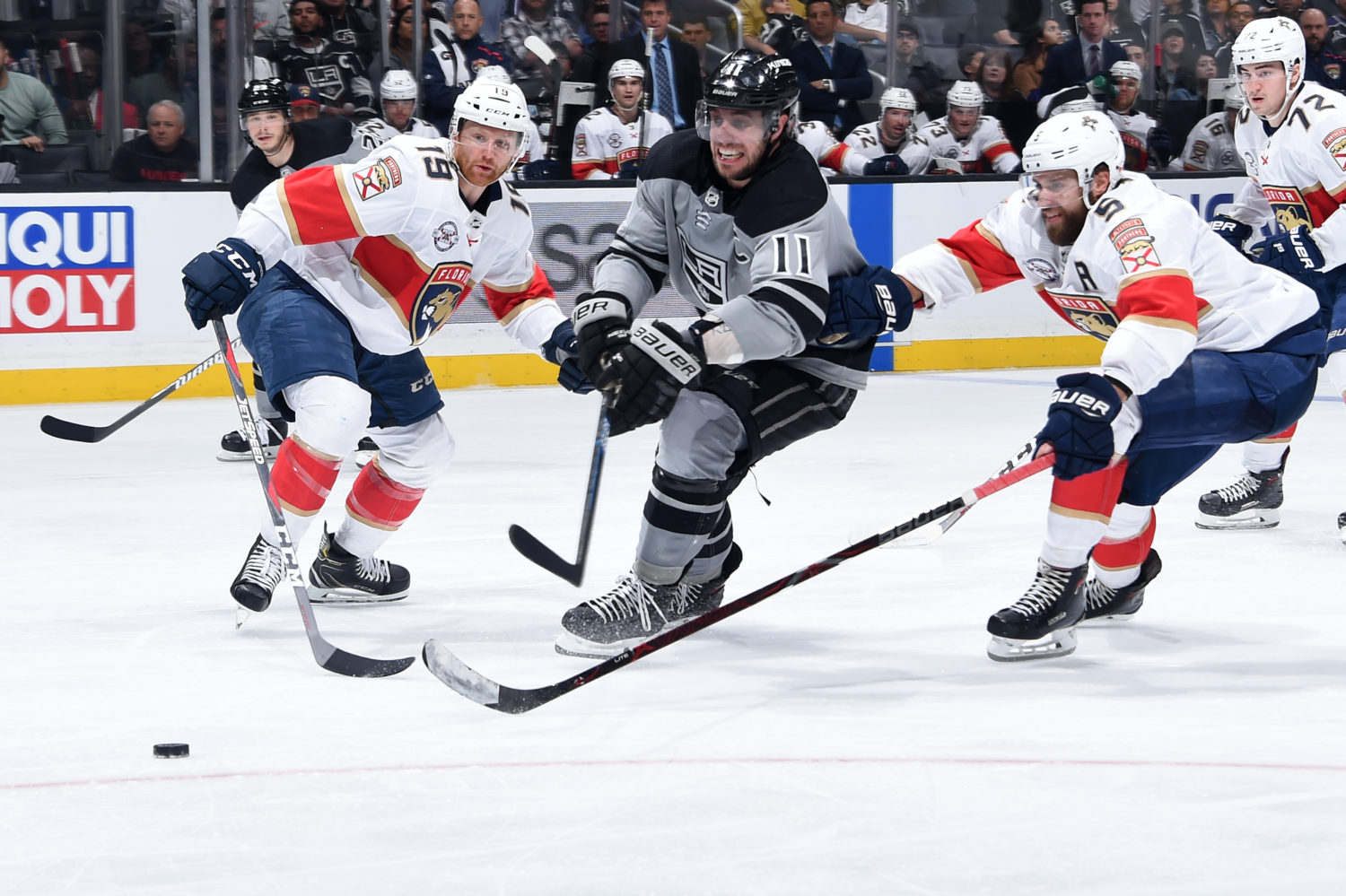 Willie Desjardins, on whether he believed Jonathan Quick had kept Jonathan Huberdeau’s goal in front of the goal line while watching the replays:
Well, it was close, for sure. We thought there might be some contact with his pad right at the end of the play. We felt there was enough there to make a challenge our of it, anyway.

Desjardins, on the team’s performance:
Yeah, I thought the first five minutes we were on our heels a little bit. We got a power play goal that got us going, which was huge. We were down going into the third and we were able to battle, get the lead there. It was disappointing giving up the two late ones.

Desjardins, on whether it was difficult to inform Ilya Kovalchuk he’d be out of the lineup today:
That’s a hard thing. He’s a good person, he takes lots of pride in what he does. I’ve got a lot of respect for him. Whenever you do anything like that, it’s always hard.

Desjardins, on whether the 11 forward-seven defenseman allows for better evaluation:
It has a little bit. It also allows me a little bit to get my centermen a little bit more involved in the game, which I like our guys through the middle. We did it in Anaheim, we got a win. It was something that we thought we’d try again.

Desjardins, on how the performance of the veteran players today can influence younger players:
I think it’s important. It’s a tough time of year, and whenever you see guys like that battling, it always says a lot for the group and for the young guys as well, but those are character guys, and they’re going to come and play hard every night no matter what. It was good to see they got rewarded tonight.

Jeff Carter, on what changed in the game after a good first 20 minutes:
I thought at times we were really good and at times we weren’t. They came out strong in the second. You could tell that they recharged and refocused. They came out and had a really good period. I thought we came out and had a pretty good period to battle back into it. You got a lead with six or seven minutes left, you’ve got to lock it down. It’s something that we’ve been talking about all year.

Carter, on if a “young Jeff Carter” ever imagined getting 700 points in the NHL someday:
Probably not. It’s taken me a while, but it’s something I’m proud of. So, hopefully lots more here.

Carter, on any particular moments that stick out from his career:
A lot of games. It’s fun. It’s fun coming to the rink everyday. There’s a lot of ups and downs, but you see the guys every morning and it puts a smile on your face.

Carter, on whether the loss could be attributed to giving up too many rushes:
I mean, skilled players are going to make skilled plays, but it’s the same story every […] game here. Get a lead, give a lead up. We let him out to dry again tonight. We can sit here and talk about it, but we’ve been talking about it for a while.

Brendan Leipsic, on giving up too many rushes against:
Yeah, the emphasis was on taking care of the puck, making them break out 200 feet. I thought we did a good job for the most part of the game, but you give those guys even just an ounce and they’ll capitalize and they did a few times tonight.

Leipsic, on the reaction on the bench to Huberdeau’s game-winning goal:
It’s close. I know if that was us, we probably would’ve thought that went it, but I’m sure they thought it went in. One of those ones where it’s tough to give up a goal late in the end and it kind of pulls a little steam off the bench and it’s hard to get it right back, but we got a good look at and Juice hit the crossbar there and it was a good response, but just a little too short in the end.

Leipsic, on the challenge of losing after gaining a lead in the third period:
Wins have been tough to come by for us lately. It’s tough to give those ones up. I thought we showed some resiliency there. Quickie played outstanding back there. Kept us in the game for the most part, we just came up short. Juice hits the crossbar and just barely hits over the line. Game of inches I guess.

–With the loss, Los Angeles fell to 20-13-3 all-time against Florida, a record that includes a home mark of 13-6-0. The Kings were swept in a two-game season series by the Panthers for the first time since 1996-97 and only the second time ever.

–Anze Kopitar became the first King to reach 20 goals on the season with his third period marker. With his assist on Dustin Brown’s first period goal, he registered his 30th assist, giving him 30 assists in every season of his career.

–Brown’s goal, the 93rd power play goal of his career, moved him past Rob Blake (92 PPG) into sole possession of fifth place on Los Angeles’ all-time PPG list. He trails Luc Robitaille (210), Marcel Dionne (172), Dave Taylor (123) and Bernie Nicholls (100). Brown played the 1,106th game of his career, moving him within five games of Dave Taylor’s franchise record of 1,111 games played as a King.

–Drew Doughty appeared in his 399th consecutive game. He has not missed a game since the final four games of the 2013-14 regular season.

The Kings are scheduled to practice at 10:00 a.m. on Sunday, March 17 at Toyota Sports Center in El Segundo.