The Ontario Reign made it six wins from their last eight games as they got scoring from throughout their lineup in a 5-2 win over the Tucson Roadrunners, completing the weekend sweep in Arizona.

Ontario got goals from five different players and points from 12 as they skated to a three-goal win, powered by four second-period tallies. The Reign got strong goaltending for the second straight night, as Peter Budaj stopped 33 of the 35 shots he faced in the victory, winning his third consecutive decision.

After a scoreless opening period, the Reign scored three times in a span of 3:31 to open up a three-goal advantage in the second period. Defenseman Austin Strand opened the scoring with a shot from the right-hand circle, his first goal since February 15, to get the visitors on the board. Forwards Mike Amadio and Mikey Eyssimont tallied later in the period to extend the lead to three, as Amadio extended his goal streak to three games and his point streak to six games.

After Tucson opened their account later in the period, the Reign responded exactly 60 seconds later as forward Sheldon Rempal scored for the second straight night, potting his 15th goal of the season. The Roadrunners capped off a high-octane middle stanza with a goal from Brayden Burke, who scored for the second time this weekend as well.

Tucked inside that hectic half-hour stretch was another goal in Arizona, that of Carl Grundstrom, who tallied his first career NHL goal. Read more on Grundstrom’s debut HERE.

Reign winger Jamie Devane scored the lone goal of the third period, finishing off a nice passing play that was started by forwards Philippe Maillet and Brett Sutter. Budaj and the Reign’s defensive effort took things from there, closing out the three-goal victory.

The Reign now head to Colorado, as they look to continue a strong run of recent form. After a travel day tomorrow, and a practice day on Monday, Ontario will play against the Eagles on Tuesday and Wednesday evening in Loveland, CO on both nights.

Austin Strand on getting back in the goal column, especially in a win
It was awesome. It was really nice, especially because I feel like I haven’t been helping offensively as much as I should be lately. It was good to get that one. I’ve been getting a lot of reinforcements from the coaching staff, to just keep shooting, and less stickhandling, more shooting and being [simpler] in the o-zone and d-zone as well.

On what he saw on his goal
I was going to just one-time it right away, but I saw [their defender] was in the lane pretty well, so then I faked the one timer. I was going to try and go wide, but it looked like he had a pretty good angle on me still, so I just threw it on net and sometimes not the hardest shots go in. Out of all the shots I feel like I’ve had, it’s nice to get one that could go through and go in the net.

On an opportunity for him with several other defensemen injured or up in the NHL
I feel like, for sure, that’s the key to the situation. There’s just a lot of opportunity for our whole backend with those three guys up and I feel like we’re doing a really good job with that, only allowing two goals today. We’re getting a lot of help from Buuds and Cal and I’m really impressed to see how well the backend is doing, you love to see it.

On whether he and the other young defensemen take it upon themselves to carry more of the load down the stretch
With those three guys up with the Kings, there’s definitely more ice time down here for us. Now, with Claguer going out too, it’s just more opportunity for us to get more minutes and I feel like it’s easier to get rolling when you get more minutes. I’m all for getting more ice time, I’m used to that from juniors, so it’s nice to get that up here and it was nice to get two wins this weekend. It was good getting Devo back in the lineup too. He had a really good goal for us today. He’s been a really good guy off the ice, so it’s good for him to get back in the lineup and get that goal for us.

Mike Stothers on his team’s compete, as it relates to Cal Petersen’s quote from yesterday
There’s absolutely nobody [that’s throwing in the towel]. I mean, they’re all working their tails off and they have all year. You can’t look at the wins and losses necessarily…we’ve only had a couple of real clunkers where I’ve been disappointed in the outcome. Not the score per say, but maybe fatigue had set in and maybe it caught up to us or whatever. There’s a good group of guys in there, they work hard and they care and I think that’s the most important part, they care. They care for each other, they don’t want to let each other down. Despite the fact that, you look at us in the standings and it’s an uphill battle, teams come in and think that maybe we’re going to be an easy mark, we don’t approach it that way. There’s a certain way you need to play, whether you’re winning or losing. You play with structure, you play with discipline, you play with pride. Play like you love the game and if you don’t, then get out of the game.

On Mikey Eyssimont, who scored tonight
He does [have a good offensive skillset] and Mikey’s still feeling his way out. He’s a young kid, you come in and you think it’s going to be easy and it’s not and it’s been reflective in his play. He’s had a hard time getting on a line or getting ice time at certain points, but I think the process is working in his favor. Everything that he’s learning and going through this year is only going to make him a better pro.

On his younger defensemen stepping into larger roles down the stretch
Well, they’re getting more minutes out of necessity. It’s incredible what’s going on. We’ve gotten some guys up with the Kings, Kale blocks a shot last night and ends up getting hurt and the guys went in and they did a great job. Tonight, you see how much they care, because they watch their teammate last night get hurt blocking a shot but nobody shied away from it again tonight, there’s guy out there blocking a ton of them again. That’s what it’s all about. That’s when you know you’ve got good people and that’s when you know you’re headed in the right direction to get back in the win column on a regular basis.

On Carl Grundstrom making his NHL debut and scoring his first NHL goal with the Kings
Oh, we’re all thrilled for him. It’s awesome. Again, it’s a good example of our guys going up, getting an opportunity and contributing. That’s what the American Hockey League is all about, we’re trying to get guys ready to play in the NHL and good on those guys for putting in the time and the work and being willing to be coached and taught. His natural skill and ability takes over, he’s a heck of an athlete. That might’ve been his first, but it’s not going to be his last NHL goal, I can tell you that. 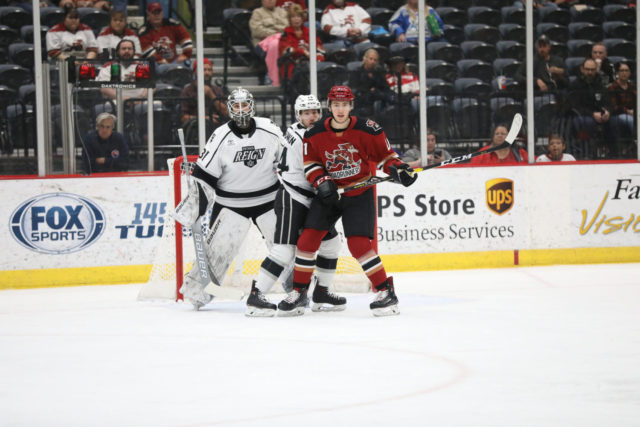 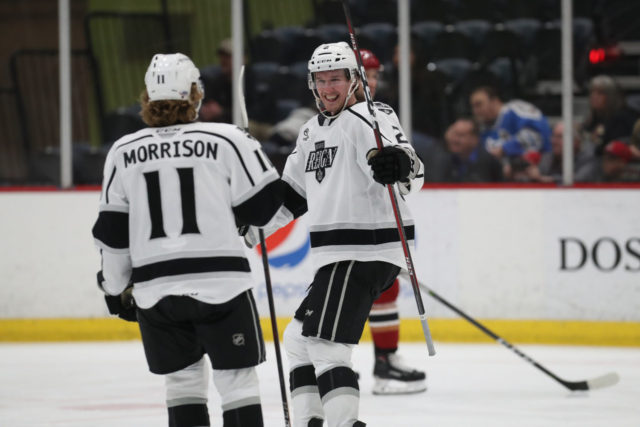 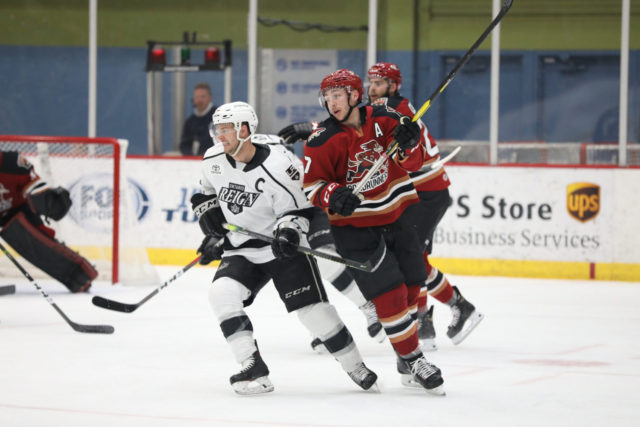