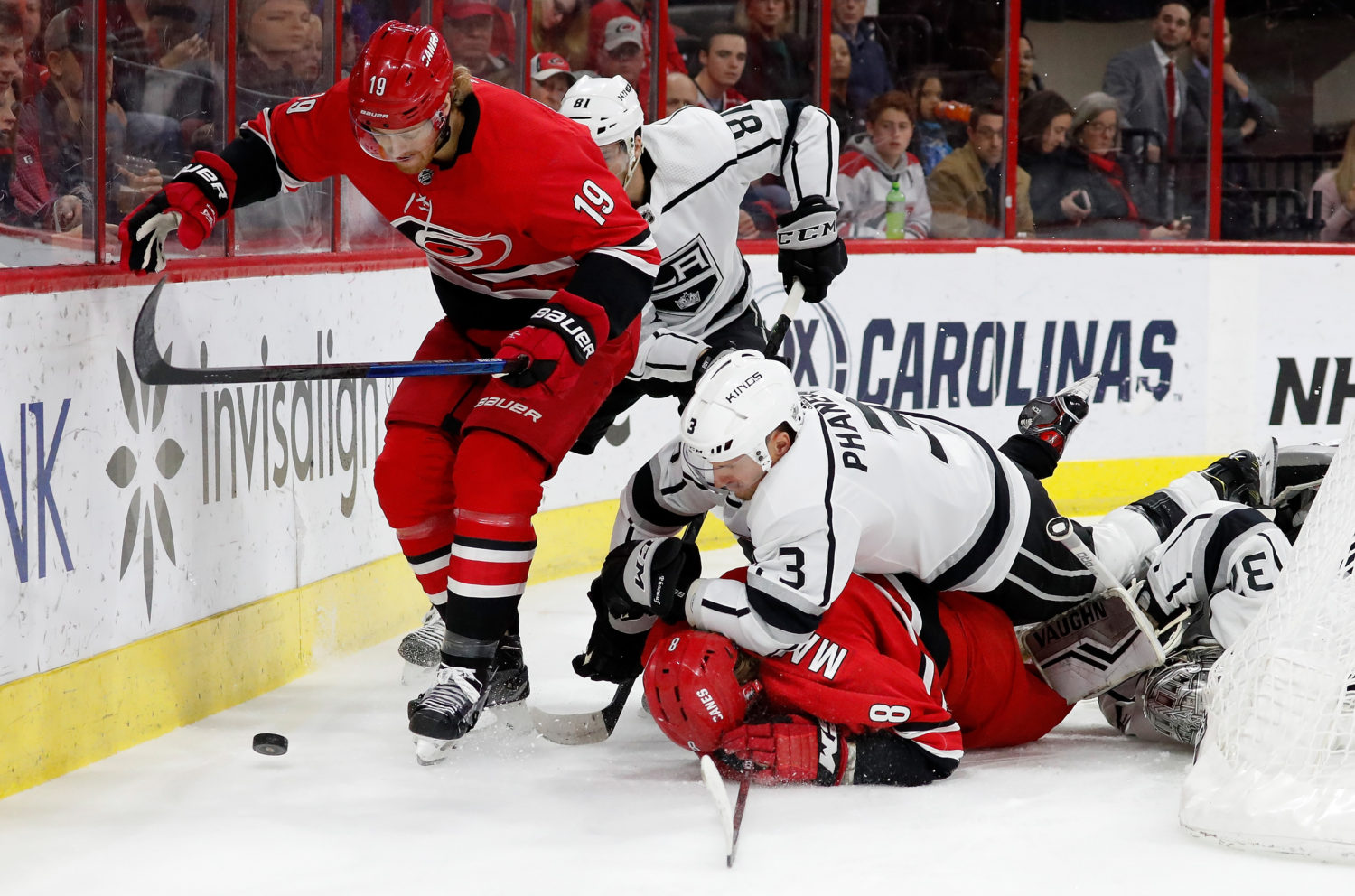 Willie Desjardins, on whether the frustration of the trip culminated in the loss:
They’re a good team. We seemed to be tired. That game last night was a tough game. The boys played hard in it. Back-to-back, I thought our guys were tired. We weren’t getting to pucks quick enough. It was just one where we weren’t good enough.

Desjardins, on whether it was clear that Carolina’s first goal wasn’t goaltender interference:
No, it wasn’t clear. I think it could’ve gone the other way. It was just a call that – we didn’t think we were going to get the call. It was early. I probably should have challenged it. I think Quickie’s a pretty smart guy. He felt that there was some contact there, so we probably should’ve challenged it. [Reporter: It looked like they talked to Kopi and maybe a couple other guys. Was anything explained to you beforehand or immediately after?] No, we looked at it on the bench and you couldn’t tell. It looked like we might’ve pushed the guy in. That’s why we didn’t make the call, but looking back, we probably should’ve challenged it. [Reporter: He is who he is because he’s fiery and competitive. But him coming over and letting you know how they felt, how did that go down?] Good. You’ve got to appreciate how competitive he is. He felt that was the call. He’s battled a lot for this team, he’s an incredible heart and soul guy. He’s been for this team for a long time, and we weren’t good enough for him tonight or the last game, either. We haven’t been good enough for him, and it’s unfair to him it came out of that. That’s what makes him so good.

Desjardins, on whether it’s possible to transfer momentum from the end of the game into Thursday:
Well, it has to transfer. Thursday’s a ways a way from that game, so we have to start our own energy and our own momentum. By Thursday, it’s just a different day. We have to look at it. We just weren’t good enough tonight. There’s nothing more to say. We weren’t good enough all the way through. We can’t let that happen. We just can’t. It doesn’t matter if it’s a back-to-back or you’re going against the top teams, it doesn’t matter. We have to find a way to be better.

Desjardins, on whether he plans on giving Jonathan Quick a rest and playing Jack Campbell more:
We’ll look at the different options. He deserves a lot. He’s put up so much for this team. We’ve got to be better in front of him. Like, that’s all there is to it. We just aren’t good enough in front of him right now, and it’s not fair to him.

Tyler Toffoli, on whether the team ran out of juice after the Tampa Bay game:
I mean last night doesn’t matter. Everybody keeps saying that we played well, but we lost seven — this is seven in a row and this is eight or whatever it is. It’s no excuse. I think we’re all professionals and we’ve all had back-to-backs since we were 15 years old, so having a back-to-back game, I mean, […], I played in the American League when I was playing three games in two and a half days, so it’s no excuse for any of us. It’s disappointing and we have to be better, obviously.

Toffoli, on how the team reacted to Quick’s outward display of frustration:
I think it was just frustration throughout everybody.

Toffoli, on whether the team is frustrated at not being able to help their goaltenders out more:
I think that’s how we felt all season long, I think. I think him and Jack and Cal when he was here, obviously we didn’t perform or haven’t performed and they’ve had to make pretty incredible saves to keep us in games, even to keep us in games to lose. So, we’ve got to be better.

Derek Forbort, on the game being representative of the team’s frustration snowballing:
Yeah, I think we’re definitely letting the frustration get the best of us right now. We’ve got to find a way to stop or it’s going to be a pretty embarrassing end of the year.

Forbort, on an assertion that the character of a team is revealed during challenging times:
I mean, yeah, tonight was pretty embarrassing. We’ve got to come out next game and play hard and definitely have some character in this room because that was pretty pathetic.

Fobort, on the impact that Quick’s emotional outburst had on the rest of the team:
I guess at least he was showing some fire out there. I feel like maybe if the rest of us did that we would play a little better.

–With the loss, Los Angeles fell to 38-31-10 all-time against the Carolina franchise, a record that includes a road mark of 14-19-7. Both teams finished the season series with a 1-1-0 record.

–Dustin Brown scored his 274th career goal, moving him within one goal of Butch Goring (275) for sixth place on the team’s all-time list.

–The Kings attempted 45 shots (23 on goal, 13 blocked, 9 missed). The Hurricanes attempted 80 shots (34 on goal, 19 blocked, 27 missed). Dougie Hamilton led all skaters with nine shots on goal and finished with 16 shot attempts, while four players tied with a team-high three shots on goal for L.A.

Wednesday, February 27 is an off-day for the team. The Kings’ next practice is a 10:00 a.m. morning on Thursday, February 28 at Toyota Sports Center in El Segundo.