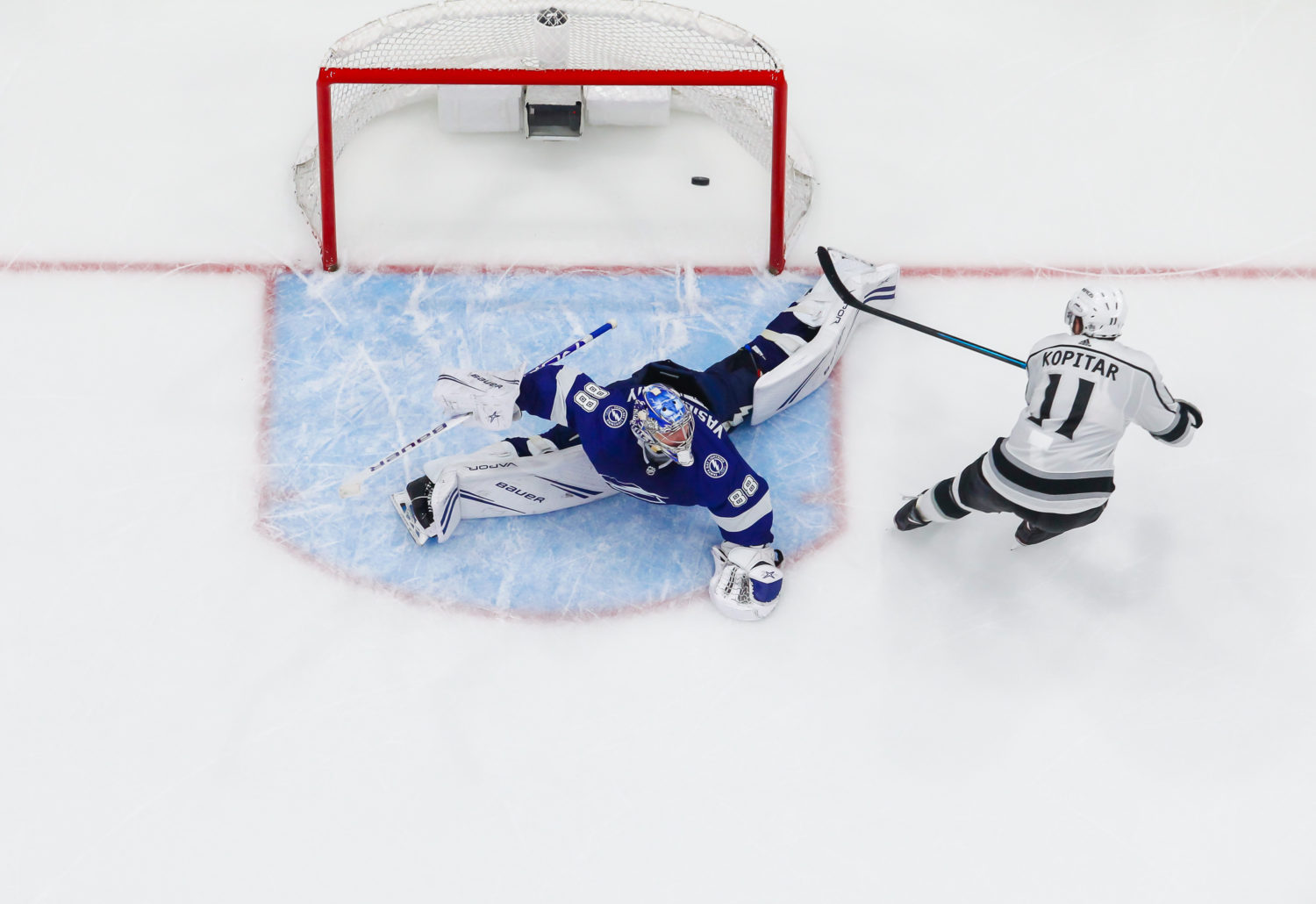 Willie Desjardins, on the strong team performance:
Yeah, it was a good performance. This is one of the top teams in the league. I think the trade deadline, it was a long day for lots of guys. I thought they got up two on us and we hung in there and kept playing. It would’ve been nice to get a win.

Desjardins, on any difference in the team’s mood before the game and after the trade deadline:
I don’t know, I think there was certainly a sense that we had to play well tonight. We knew this team was a good team and that they were going to come at us really hard, so we knew we had to have a good effort. We were going to have to be quick on the puck. I thought we played well. I thought we deserved more early, then you can get a couple breaks in the third. But overall the guys, they worked hard.

Desjardins, on Jonny Brodzinski’s first game:
Yeah, he’s got a great shot. Like, he has a really good shot. He had one good look early that didn’t go – it just missed on him. Then it was nice of him to get that one and bury that one, for sure.

Desjardins, on any conversations with Brodzinski before he played his first game:
We had talked, but I think the biggest thing for me is he worked hard. When he was trying to get back, I think he got quicker, because when I watched him out there, I thought ‘this guy can help us.’ Like, this guy is fast and he’s got a great shot. So I don’t know where he was before I got there, but I thought he could maybe come back ready and help. It was good to see. I thought that line with Kempe and him had good chemistry, Leipsic as well. Hopefully that line can keep producing for us.

Desjardins, on Oscar Fantenberg:
He had really picked up his game. He went from a guy that was not playing much to a guy that we were counting on for lots of minutes, and that’s the way it goes. Obviously guys want your guys that are playing, so it didn’t surprise me that they would target him. But he was good. He played hard for us, he gave us depth. But it was good to see tonight. Other guys stepped in and played, so it was great for that. We wish him the best, but it was great to see those young guys step in and play.

Dustin Brown, on being able to focus on hockey now that the trade deadline has passed:
I think probably human nature for everybody, whether you’re rumored or not. You know? You’re life changes if you do get traded, so it’s almost impossible not to think about it especially when the day’s upon you. It’s a unique thing for our job that you have to deal with once a year. And even if you try to block it out, it’s weighing on your emotions, your thoughts to get through. I think now it’s through and if you’re here, you’re here and you go to work.

Brown, on knowing that this is the team going forward for the rest of the season:
Yes and no. I mean this is probably a different situation — I touched on this a few weeks ago. There’s a lot of guys who have never been in this situation. Unfortunately I have, but yeah. So it’s important for guys for a selfish standpoint, from an individual standpoint to make an impression because everyone at this point should be. Right like I said, the deadline has passed, but if you want to be a King you’ve got to play like a King and we’ve got to find a way to both individually, I think it’s more the individual thing right now, and if everyone is better individually then we’ll be better as a team. It’s one of those things where 20 games until the end of the year, but 20 games to the end of a bad season where there will probably be changes regardless.

Brown, on Rob Blake’s message that the veteran players should not be left of the hook:
I think it comes down to at the end of the day when I think everyone’s had a tough season, but it comes down to your personal pride essentially. What you want to be like as a player, and it’s easy to be good teammates and good players when things are going well. It’s when things are not going well that you kind of see what you’re made of. I don’t know, that’s what I mean when I say it’s the last 20 games. I don’t even know where we are in the standings, but we’re not going to make the playoffs, so it’s important for guys to respond in the right way and understand that how they play now can impact not only their future, but what happens to them individually and as a team collectively.

Jeff Carter, on the shootout loss:
A hell of a hockey team over there. You know what? Soup played great. He made some huge saves for us. We need PP to get one. But that probably changed the game. We got a lot of good effort from a lot of guys, especially in the third. We made a couple of turnovers. We’re probably on the other end of that. We’ve got to win games, right? We can say we did a lot of good things. We’re here to win hockey games.

Carter, on any relief that the trade deadline had passed:
Maybe. We’re all playing for jobs, here. We’ve still got a lot to play for.

Carter, on any difference in the mood after the deadline passed:
I’m sure it’s weighed on a lot of guys. We’re only human, right? I’m sure it’s, a lot of guys are happy that it’s gone by. We’ve got to put some games together.

Jonny Brodzinski, on what the feeling is after tonight’s game:
I think that we, after everything, I think that we know that we can win. Down two goals to, you know, maybe just a couple. We didn’t the puck out on one and then maybe just kind of losing your guy on the other one and it’s you’re down 2-0 against the best team in the league. Showed a lot of adversity to come back and then we played really well in the third. I thought that was one of our best periods for sure.

Brodzinski, on whether there is a collective sense of relief now that the trade deadline has passed:
Yeah, and I think that now everybody is just kind of locked in that this is our team and we’re, you know, we want to finish out the year, no matter where we are in the rankings right now, we want to be the best team that we can possibly be right now.

Brodzinski, on scoring his first goal of the season in his first game back from injury:
I thought I was going to get one a little bit earlier. I had a couple more chances that first period. One didn’t slide over as quick as I thought he would so I kind of just put it into his chest. One went off the post, but Juice and Leiper were finding me and that’s, you know, kind of my role is just to find those spots and good turnover by Leiper and found me.

Brodzinski, on how he felt in his first game back:
It was good. My legs felt great. Sometimes that doesn’t happen when you’re out for five and a half months, but as far as a team goes, I felt like we played well tonight. First period, a couple mistakes leading to their goals, but I thought we played well and you know coming back. And they like to get their D up in the play, so it was nice to kind of get guys back and I think guys are kind of buying into it a little bit more with the tracking back and finding their guys.

–With the shootout loss, Los Angeles fell to 13-20-5 all-time against Tampa Bay, a record that includes a road mark of 8-8-3. The Kings finished the season series with a 0-1-1 record against the Lightning and have lost six straight head-to-head matches (0-5-1) since a 3-1 win at Staples Center on December 6, 2015.

–By playing in his 598th career game, Trevor Lewis is two games shy of 600 in his career.

–With one goal, one assist and a plus-two rating, Austin Wagner has five goals, seven points and a plus-three rating in his last nine games.

–Los Angeles attempted 54 shots (33 on goal, 12 blocked, 9 missed). Tampa Bay attempted 66 shots (34 on goal, 9 blocked, 23 missed). Steven Stamkos led all skaters with seven shots on goal, while Dion Phaneuf led the Kings with four. All Los Angeles skaters other than Paul LaDue finished with at least one shot on goal.