Trailing 2-0, the Reign netted a pair of goals to tie things up midway through the third period, but a late goal from former Los Angeles King Jordan Nolan was the deciding factor as the Rampage earned a 4-2 win over the Reign on Friday evening in Ontario.

As the hosts stared down a 2-0 deficit midway through the third period, enter defenseman Kale Clague. The first-year blueliner scored twice in the third to tie the game at two, his fourth and fifth tallies of the season. Clague’s goals included one on the man advantage, but it was the San Antonio man advantage that was the difference in the game. The Rampage scored three times on five chances on the power play which proved to be the difference in the game, including Nolan’s tally inside two minutes to play in the contest.

Ontario certainly had its share of chances in the early goings, but a pair of power-play goals against in a 64-second span in the first period set them behind the eight ball. Defenseman Mitch Reinke collected the primary assists on both tallies for the Rampage, as he extended his team-leading total to 27 on the season. Defenseman Jakub Jerabek opened the scoring 16:01 into the game, with a shot from the left circle, followed by forward Jordan Kyrou, who scored from the center point, through traffic in front of Petersen.

After a scoreless middle stanza, the Reign got on the board through Clague at the 9:07 mark of the third, via a power-play goal from the center point. Just over four minutes later, Clague struck again to knot the score at two, this time with a goal from the left wing that beat San Antonio netminder Jared Coreau over the right-hand shoulder. With the assists on Clague’s second goal, forwards Zack Mitchell (5 Games) and Sheldon Rempal (4 Games) each extended their scoring streak.

The cards didn’t fall in the Reign’s favor, however, as they Rampage power-play scored inside two minutes to play, as Nolan tapped one in just seven seconds after a late hooking call on Philippe Maillet, before forward Bobby MacIntyre capped things off with an empty-net goal.

Petersen finished the game with 48 saves on 51 shots – The second-year goaltender has now faced at least 45 shots in three of his last four outings.

The Reign cap off a three-game week tomorrow evening as they host Colorado at the CBBA – Puck drop is slated for 6 PM.

Kale Clague on his performance tonight, despite the final result
Yeah, you know, it’s good to get on the scoresheet, help your team try to win a hockey game. We were down two and it was nice to be able to tie it. It was a bit of a special teams battle tonight, we need to be better on the kill and on the flipside, we need to be better on the power play. I thought we had a lot of power-play opportunities at key moments of the game and we didn’t get it done.

On the team’s improved play as of late, even in losses
The games are closer, that’s a positive. We’re not giving up as many goals, that’s also a positive. We’re just trying to continue to get better every day, come in with an open mind every game and we’re trying to win every hockey game. Obviously, we’re in a fight, we’re at the bottom, but we know we’re still coming to the rink with a good attitude and we want to win hockey games.

On the team’s resolve
Lately, the games have been a little closer. We’ve been staying in games. I thought we did a good job tonight, obviously we were down two but I thought we worked hard to battle back and find two. We’ll come ready to go tomorrow night and hopefully get a win against Colorado.

Cal Petersen on if he has a preference between facing a heavy workload or a lesser one
I mean, I guess I don’t really get to pick. It’s more that it keeps me in the game, but it’s tough if a lot of those shots are high quality, so it’s give or take. But, obviously, I’m just trying to stop however many come my way.

On what appeared to be a lack of quality shots he faced in tonight’s game, despite seeing 52 in total
I think we did a pretty good job of keeping guys to the outside, most of their chances that they generated were on the power play, so that part was kind of tough. They’re a good team, there was a little bit of movement in the offensive zone, but for the most part, it wasn’t a ton of “right in the slot shots” of those [52].

On his relationship with Dusty Imoo
He’s been awesome, I can’t say enough good things. I didn’t know Dusty all that well when I came in here, and just to see the relationship we were able to create last year, and have it carry on to this year, he’s been awesome. It’s hard to put into words, because he has that ability to help me out technically, but I think his greatest suit – you can ask Campbell, you can ask Budaj – is to be able to relate to the goalies, to be there for [us]. I think sometimes, it’s all about having a guy in your corner and I think he’s, throughout my career, been the one guy that has really helped me on that side of things, create a good mental space where I can be my best every night.

On his season to date and where he rates his game at thus far
I was obviously very happy about how I handled the opportunity with the Kings, it felt like it took a huge step in my game. When I came back here, it’s obviously been a challenging year all around, wins haven’t come easily and there’s been some growing pains. The biggest thing for me has just been trying to gain on that momentum that I got when I was up. The tough part here, is that sometimes you feel like you have great games, but it doesn’t really reflect on the scoreboard that well. The biggest challenge has been to stick to my game, even on some tough nights, so I’m proud of that part of it.

Mike Stothers on Kale Clague’s game
The guy had two goals, we only scored two didn’t we? That’s pretty good. That’s good for a young defenseman. Kale’s been good, he’s come along nicely without it being a rushed process, it just took him a little bit to get his feet underneath him, learn the pro game a little bit. There’s still some warts, some weaknesses there and we’ve talked about it with the defending part. He’s got to be a little firmer to play against as a defenseman, but that’s what he was drafted for. He’s a creative guy on the power play, he makes plays, he generates points. He finds a way to bring things to you offensively. I think he’s playing right into what the role was for him when he was drafted. It’s up to us to show him up a little bit defensively and make him a little bit more responsibly defensively.

On Cal Petersen’s high workload and whether it’s encouraging to see how he handles it, or discouraging to surrender so many shots
Yeah, that’s a lot of rubber. Well, it’s a development league. That’s what he does, he’s got to top the ones that he faces, whether it’s 12 or 52. Cal’s good.

On the possibility of a scrap between MacDermid and Nolan and the role of fighting in the game
Would have been nice. It would be nice to see one sprinkled in occasionally, just for all us old dinosaurs that like to see the gloves drop. I don’t even care if it’s our games, or just turn on a TV and watch a game where there’s somebody that drops the gloves. That’d be nice. Instead of running each other with headshots like McDavid and stuff like that. Is that what we want in the game? How about we settle it the old fashioned way, just every once in a while.

Mike Stothers on Nikita Scherbak’s recovery process
He’s going to be out a bit, yet. I don’t think too much longer, but he’ll be out. After this week we play Friday, he might be back for next week. 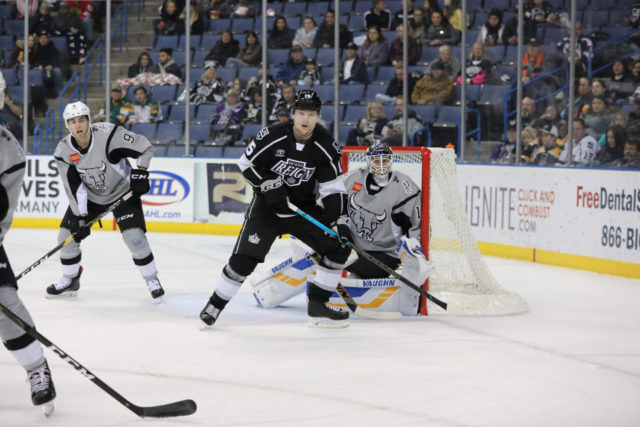 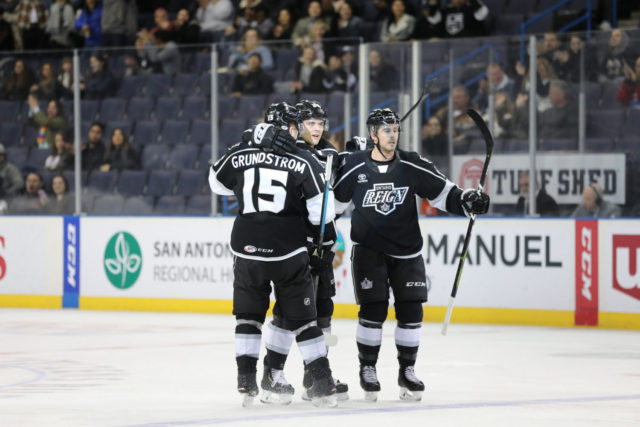 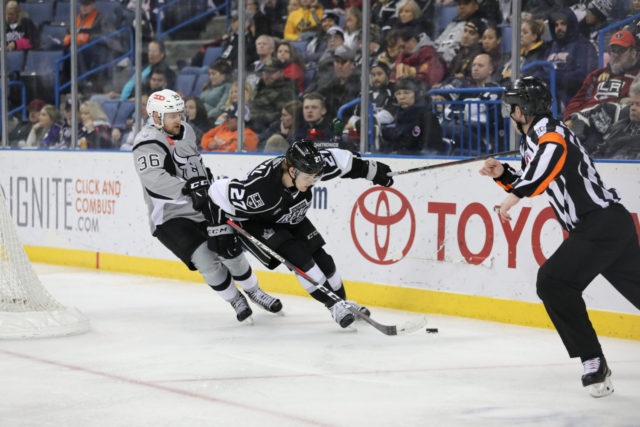