Unease as trade winds swirl: “We’re basically all a bunch of brothers”

Trade winds have begun to blow again in the direction of the LA Kings, who will be among the teams with the potential to make multiple moves in advance of Monday’s trade deadline. They’re clear sellers, looking to continue the organizational thrust to refresh its personnel and continue building towards a sleeker, faster, more skilled group, and in that transition may part with players who’ve played important roles during organizational zeniths earlier this decade.

Some two weeks ago, the feeling many had was that the Kings wouldn’t be excessively noisy at the deadline and were instead more likely to be active at and around the NHL Draft, another part of the calendar in which player movement is expected. That will still probably hold true for some of the more cumbersome and high-profile roster pieces complicated by larger cap hits or particular clauses governing their movement.

But this is a very difficult time for a group that will have a different look when it returns to LAX in the wee hours of Wednesday morning from a road trip that opens Thursday in Nashville. It was difficult when Tanner Pearson and Jake Muzzin were traded; it was difficult when Nate Thompson, who didn’t have the same tenure as the other two, was traded. And it’s a completely new feeling for a group that largely came of age alongside each other in the National Hockey League, winning a pair of Stanley Cups.

“A lot of us have grown up together. We spend the summers together, we’re family. It’s hard to explain,” Kyle Clifford said. “We’re basically all a bunch of brothers. It’s hard. It’s a difficult part of the business. Nobody likes being a part of this, but at the same time, we’ve kind of put ourselves in that situation. We just go learn from it and do better down the road.”

Clifford is among those drawing interest based on sources outside the organization, but it’s not easy to get a firm read on how open the Kings would be to parting with a player who serves as the manifestation of pure, positive hockey intangible. For a team whose veteran leadership contingent has dealt with erosion since 2014, he is an eminent team-culture player who works well with younger, developing players and is among the few on the team to be having a very good season. He’s signed for one more season past this one and carries a $1.6-million cap hit; the teams I’ve heard to be interested are in the Eastern Conference. 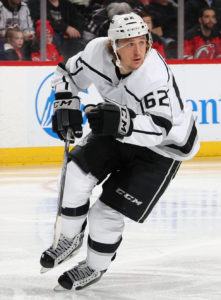 But if there’s a player with a higher probability of getting traded than anyone else, it’s Carl Hagelin, who is bound for unrestricted free agency after the season and carries a $3.75-million, retention-affected cap hit. That’s a sizable contract for many contending teams pressed against the cap, so any hypothetical trade might have to lean on Los Angeles absorbing some of this year’s remaining salary and/or a roster player in return.

This all potentially ties in to the Washington Capitals, who this morning informed reporters that Dmitrij Jaskin would be placed on waivers, instead placed Devante Smith-Pelly on waivers, and now are thought to be negotiating with the Kings, as shared by hockey’s A#1 Insider Bob McKenzie and wondered aloud by The Athletic’s Lisa Dillman.

There is a lot of speculation the deal may be with LAK, maybe for a veteran depth F. Lots of possibilities: Carl Hagelin is UFA at end of season but carries $3.5M cap hit. Trevor Lewis and Kyle Clifford each have a year left after this season, Lewis at $2M and Clifford at $1.6M.

But it’s all highly speculative at this point, nothing firm at all. No sense of what would go the other way and what a potential deal may/may not include. Bottom line is that it seems WSH has interest in upgrading its depth, moving DSP out and an upgrade of some description in.

These trade rumblings aren’t easy for the players and their families to manage. Hagelin, who has been traded three times before, has dealt with them. So has Clifford, even though he hasn’t been moved in his nine NHL seasons. While the seconds ticked down in advance of a slightly less morose trade deadline five years ago, he left the ice after a team practice and walked towards several reporters adjacent to the rink, asking, ‘have I been traded yet?’ with a big smile on his face. At that point he knew he was safe, but there had been some real interest in his services around the time of the Olympics in 2014, several weeks ahead of the deadline.

Tyler Toffoli, who along with Clifford assisted on Alec Martinez’s Cup-clinching double overtime goal, has also had his name raised in trade specilation. He’s not necessarily among the likeliest to be moved – Los Angeles prefers to hold onto its younger, skilled talent capable of producing regularly – but has been affected by seeing longtime friends in Pearson and Muzzin traded this season.

“I don’t know, I’ve never really been in this position obviously throughout my career, so it’s definitely going to be interesting,” he said. “It’s going to be one of those things where if something happens, it happens. We’ve obviously seen it already this season with guys getting moved. That’s just where we’re at in the season. It’s disappointing where we’re at. It’s a business.”

The potential departure of key figures affects any dressing room this time of the season, let alone one in which they’ve won, celebrated and grew as adults together.

“I think it’s really hard for the guys,” Willie Desjardins said. “These guys, L.A. is their home. They’ve worked hard here, they’ve put lots of time in here, so that’s a hard thing when you hear all the stories out there. So, it’s got to be hard on you, it’s got to affect you. But the only choice you have is to keep playing and play hard, and what happens, happens. It has been hard for them and it is frustrating, because they’re in a place they’re not familiar with, and that’s different for them, as well.”

Kyle Clifford, on how this season is weighing on him:
If it doesn’t affect anybody seeing Tanner and Jake traded away, then that’s not the type of team we were and we are. Guys care here. Those are two really difficult days. It’s tough to explain. It’s not fun.

Clifford, on whether players are handling potential movement well:
Yeah. It’s rough, but we’re doing it together. Like I said, it’s part of the business. You don’t want to see your friends move on. We want things to be better. It was a lot easier the last eight or nine years when we were in contention every year, making a run for it. We have a really strong identity, but it’s just part of the business.

Tyler Toffoli, on handling a difficult homestand and season, and now the trade deadline:
It’s definitely been tough coming home after having had, I feel, a really good road trip. It’s a really tough road trip being on the road for, what was it, 14 or 15 days for us, and to come home and not be able to win some games is definitely frustrating, but that’s how this season’s gone. We’ve had chances, we’ve had opportunities to win those games, and we just haven’t been able to pull through.

Toffoli, on how he handles his name coming up in trade speculation:
It is what it is. Like I said, I’ve seen my friends get moved already this season, so it’s one of those things where anything’s a possibility. I’m just taking it day by day and trying to win games here. Like I said, the season’s closing in to finishing and things aren’t looking good, but if we just keep playing well and building as a group and winning some games here, who knows.

Willie Desjardins, on the team’s body language after the Nate Thompson trade:
I think it’s hard, but when Muzzin was traded, we played well. We came out and we played hard. When Thommy, we played hard, and that’s a real credit to our leadership and that group in there, because those aren’t easy trades. There’s not anything easy about ‘em. It’s hard, it’s hard on the guys. But they approached it the same way they came in and they worked hard. For me, I give lots of credit to them as a group. 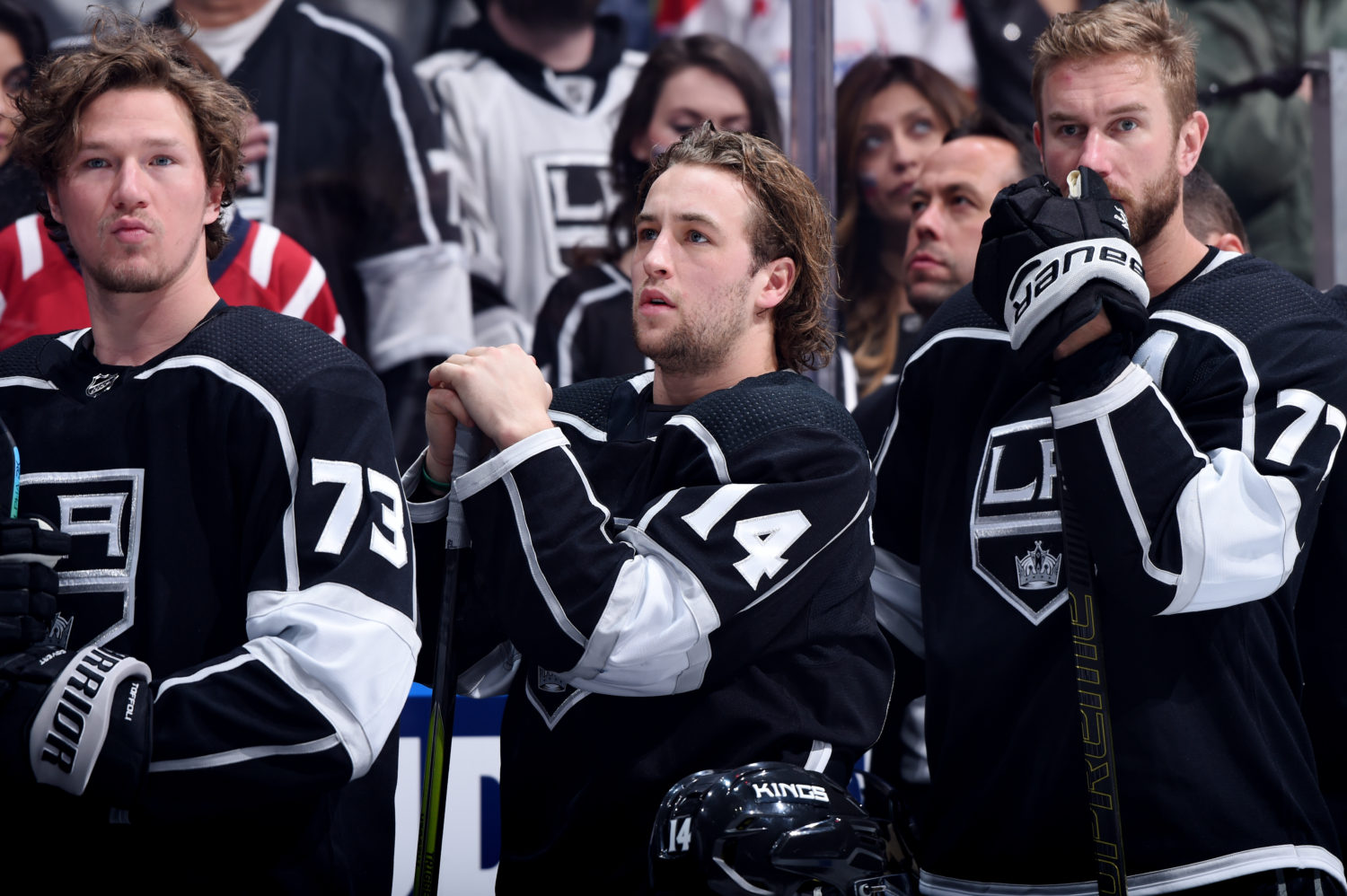