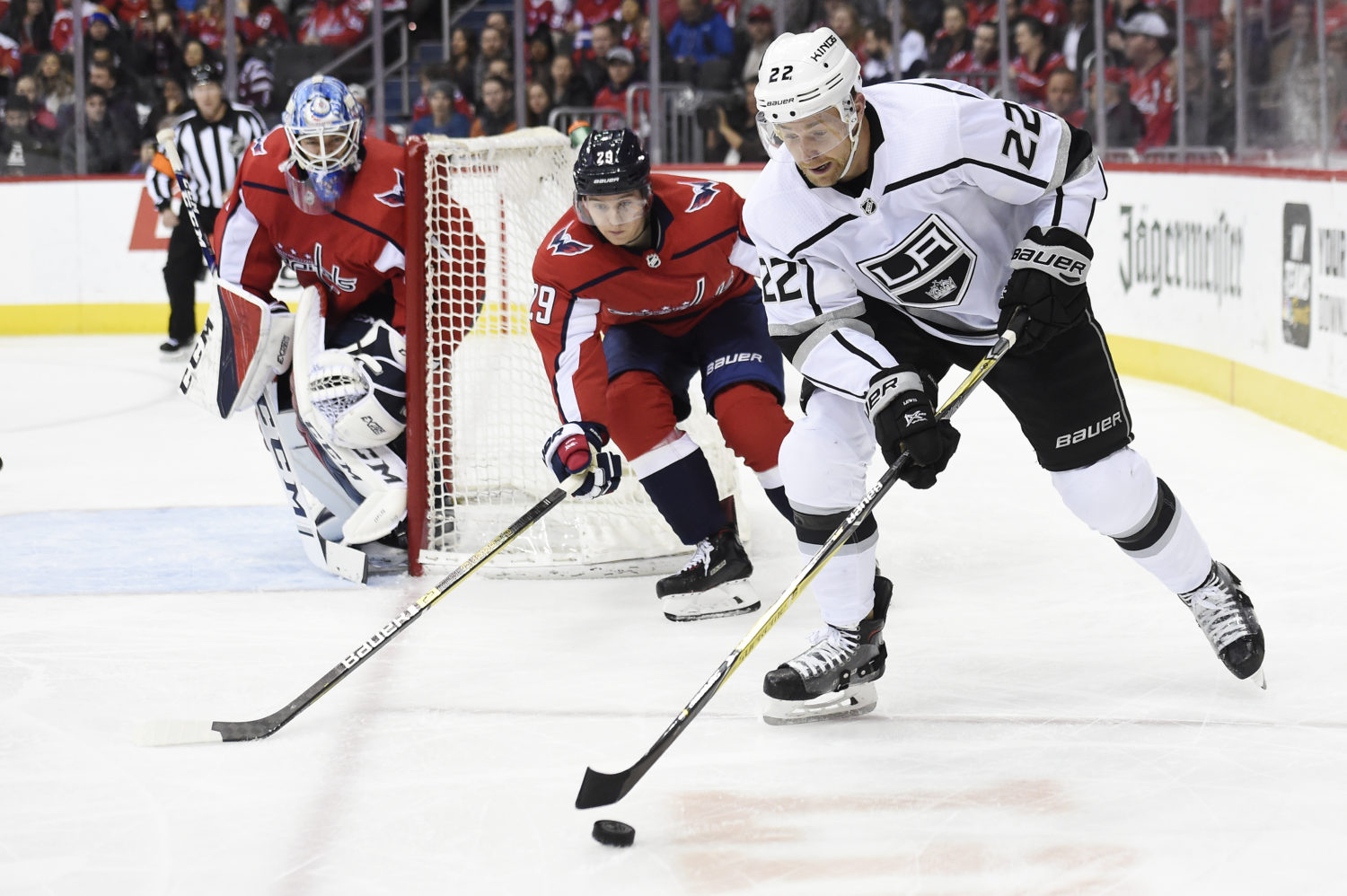 Willie Desjardins, on the 3-2-1 trip:
Yeah, it was a tough trip. I thought we play good, real good the first game against the Islanders and we didn’t get anything out of that one, so that was tough, but we bounced back, played good in the middle, it was just a tough game tonight. We didn’t seem to have our legs, but I thought the guys battled.

Desjardins, on whether Washington’s offensive talent was too much to handle:
Once they get going, they are hard to handle, for sure. They put lots of pressure on you. They’re quick. When they transition or when they break out, they’re quick. It’s not just one or two guys that are quick, they always seem to have four guys on the rush. Eventually we just seemed to lose our coverage because they just put pressure on us with their speed.

Desjardins, on whether Trevor Lewis assumed Nate Thompson’s role, or whether there was tinkering:
I don’t know how much Lewie’s played at center, so I think he did a great job coming in tonight. Like, that was a real tough situation to come into. You have to give him a lot of credit, because I thought he played well. It was good. That was my first time to see him, and I was impressed, so it was good to see him. That line played well.

Desjardins, on taking “the temperature of the room” before a game on a day a player is traded:
Well, you can take the temperature, but it doesn’t matter. The game’s still going to come. You don’t have any choice. Is it tough? Yeah. Thompson was a big part of our group, he was a guy that you could rely on for a lot of different things. It is going to upset guys, but guys know that stuff’s coming, too, so you know that can’t affect us. We have to be ready.

Desjardins, on whether he knew Derek Forbort had such a high-skill assist in him:
It was good – like, he’s been good for us, too. We had lots of guys that battled hard tonight. It didn’t go our way, but even when we were down two, we were still trying to come back and after a bad second period the guys still wanted to come back. Give ‘em credit, but at the same time we have to have more. We have to find ways to win.

Desjardins, on challenges presented when Evgeny Kuznetsov plays so well:
Yeah, but the problem is it’s not just one line. You might get a match-up on him. We could maybe really work to get that, but then they’ve got other units too that are going to put you in trouble, too. But he’s a heck of a hockey player. He’s dangerous. When he’s skating, he’s dangerous and he was skating today.

Desjardins, on whether Austin Wagner gives the team a “glimpse of the future”:
It is. It shows you the speed in the league. When you have speed it makes such a difference nowadays just in the league, the way the league’s set up. Both those goals he just cut to the net and beat people, and it’s more and more the way the game’s going, I think.

Drew Doughty, on tonight being a high-scoring game:
Yeah for sure. I don’t have much to say. I’m pissed off. I don’t have anything for you, to be honest.

Doughty, on seeing Nate Thompson go to Montreal:
He was a good player for us. You know, good at faceoffs, a good two-way player, a veteran guy, so yeah we’re sad to see him go, but we’ve got to move on and these young guys have got to step up.

Ilya Kovalchuk, on Washington not being a team you want to get into a “trade-for-trade” with:
No, you know, I think we created a lot too. Just we have to score on our chances and be better defensivley, like you konw we have five guys in front of the net, but they still get the rebound. We can’t do that, so I think overall we played a pretty good game.

Kovalchuk, on playing against Ovechkin for the first time since being back in the league:
No, I don’t know why it would be special. It’s just it’s always good to play against championship team. They won last year and anybody who came here, it’s a big game. So today we play against each other, but they were much better than me so I have one more game in LA now.

Kovalchuk, on what the difference-maker was in the third period:
I think we scored a goal and we have a few good chances to tie it up, but then we make one mistake and they scored a goal, so the game was over.

Austin Wagner, on having his first two-goal game:
Obviously some stuff happened today with the team and I was told to be ready to play tonight, so I was ready to go and I think having Lewie back was huge for the boys. He played great and Cliffy played great, but obviously we didn’t get it done tonight. The first time playing this team so we learned a lot and we’re going to be ready to go when we play them whenever it is — five days or something like that.

Wagner, his line having good shifts tonight:
Cliffy’s been playing great. I thought Lewie, for being out so long, played great. I think he wanted to focus on the little things and just get his legs back into it and to start that’s what we did. I think scoring first shift obviously helped him a little bit, but you know, he played great and it’s tough. That team scores a lot of goals and they have a deadly power play, we all know that. We have to try and stay off it next game and focus on the next game and then take it into the next one. We can still make the playoffs if we keep up with the good work here and keep working hard.

Wagner, on the takeaway from the road trip:
You look at some of those games and I thought we deserved better. You know, we played great in New Jersey, we battled very hard in New York against the Rangers there. The Isles, that was a tough one, start of the road trip from the bye week. It’s not an excuse or anything like that, but coming off that bye week I think everybody knows how tough it is, and then you go into a building like Philly where they’ve been probably one of the best teams if not the best in the league and we played a very solid game there too. So at the end of the day this road trip, there’s a lot of positive to take out of it, but we’ll look at what we need to improve on and get better.

Wagner, on when he knew he would be back in the lineup:
I honestly did not, but I was just told to prepare like I was ready to play and, you know, that’s if you watch our team a lot, one guy extra always warms up and before it was Luffer and they always say you’ve got to prepare like you want to play just in case something like this does happen and the team just told me to prepare and I prepared the way I should.

Wagner, on how tough it is to lose Nate Thompson:
Tommer helped me a lot. Being a young guy jumping in the league as a rookie, and I pretty much played with Tommer the whole time. He taught me a lot of things and I’m very grateful for what I’ve learned from him. He’s an unbelievable guy and he was a great teammate in this room and very light, so it’s tough to lose him, but I think everybody knows it’s part of the business and I think he understands that and I wish him all the best and I think all the boys do too.

—With the loss, Los Angeles fell to 60-36-15 all-time against Washington, a record that includes a road mark of 25-22-8. These teams will conclude their season series on February 18 at Staples Center.

–The Kings outscored their opponents 22-21 over the road trip for an average of 3.67 goals for per game and 3.5 goals against per game.

–With his assist on Oscar Fantenberg’s goal, Adrian Kempe extended his point streak to five games (4-3=7).

Tuesday, February 12 is a scheduled off-day for the team. The Kings’ next practice is scheduled for 10:00 a.m. on February 13 at Toyota Sports Center.