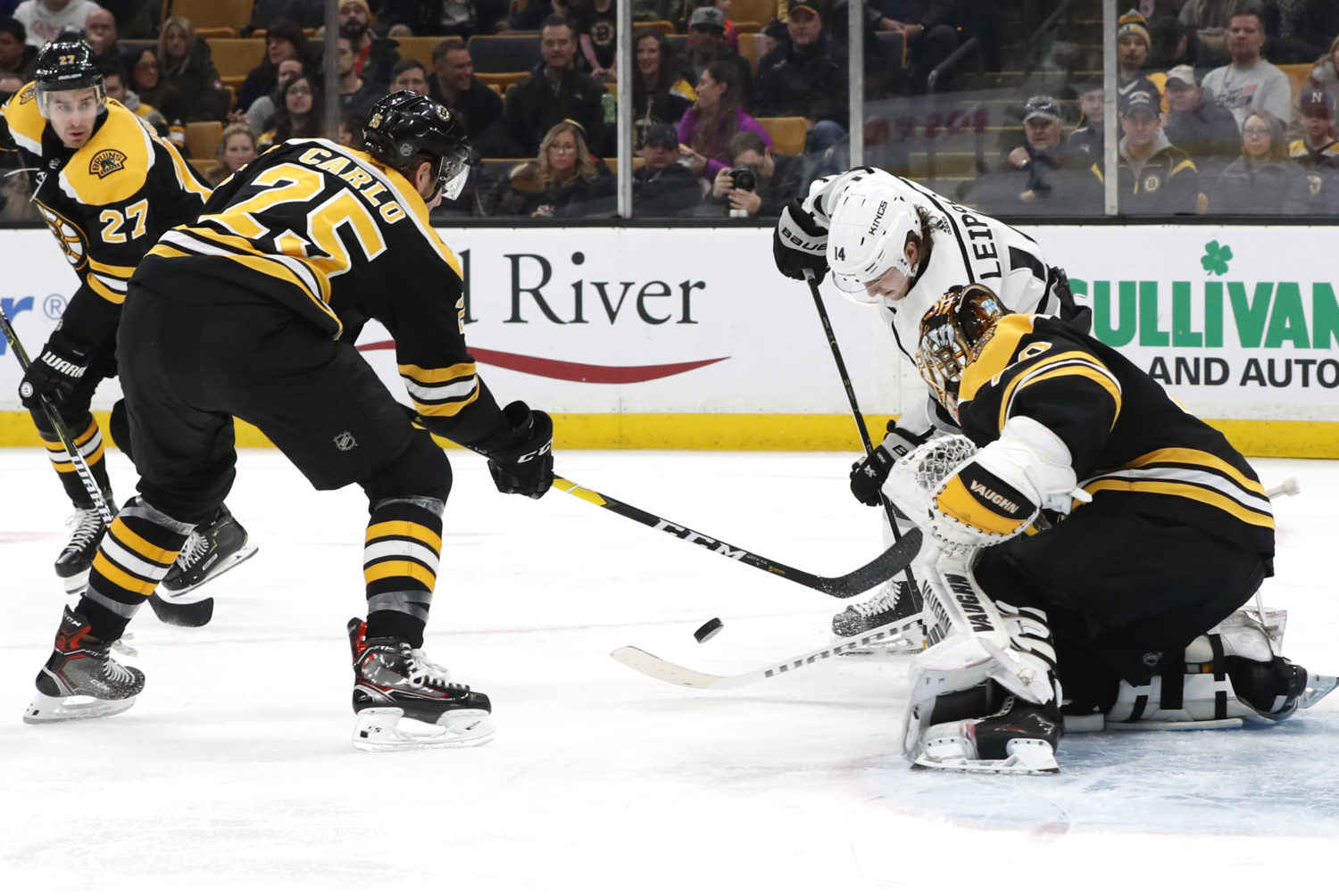 Willie Desjardins, on whether this was a good or bad single point:
Well, in the end it was a good point. The guys battled back. It was easy for us to kind of fall back. It was a little disappointing to start the third. We could’ve been better at the start of the third, for sure. But the thing I’ve liked about this group is they don’t give up, and it was good to see ‘em turn around and get a couple and end up with one point, anyways.

Desjardins, on Nate Thompson and Brendan Leipsic:
I think both are good players. I thought Leipsic had a very good game tonight. He blocked a lot of shots, he jumped on that faceoff and turned that one over. It was good to see him playing that well. I thought overall as a group, I thought all our lines played pretty well. They’re a good team, they’ve got two big lines and they’re hard to handle.

Desjardins, on whether the surge in scoring is due to generating more chances or capitalizing on them:
Maybe capitalize a little bit more, but I think our power play creates, too. I thought the biggest thing, they had a pretty good first, and then we came out with a good power play. We got six or seven shots on that power play, we didn’t score, and then we scored on the next one. I thought that got us going, I thought that got us into the game. Those were big for us. It’s a tough kill at the end. I thought the guys did a good job, but it’s hard to kill four-on-three.

Nate Thompson, on getting one out of a possible two point:
Well, a point’s a point and any points right now are good, but I think that in the third period they came out ready to play and we didn’t. We didn’t have an answer for their push there. It was a resilient second half, I thought we did a good job coming back there, but I think for the most part we were in the driver’s seat tonight and we let ‘em back in the game.

Thompson, on if the Bruins’ three unanswered goals were a result of their play or what the Kings were lacking:
I think a little bit of both. I mean, I think they came pretty hard, but I thought we made some mistakes and you know, just we weren’t as sound defensively and they make some good plays out of our zone …

Thompson, on what Leipsic has been bringing to team’s game recently:
I think he’s a guy, he’s obviously an undersize guy, but he makes a lot of plays and he skates pretty well out there. He’s very elusive in the corners and he’s a lot tougher on D down there. He’s kind of hard to handle down there, so I think he makes really good plays in tight spaces and he’s been playing very well for us.

Thompson, on Patrice Bergeron getting the game-winner for Boston:
Yeah, I mean Bergie and I were drafted here together. Came in together as 18 year-olds and I was a lot less mature than him when he came in as an 18 year-old. But we got to play together in the minors in the lockout season too, and he’s just an all-around world class guy. Every time the game’s on the line, he seems to rise to the occasion and be the guy and, you know, whenever you think of the Boston Bruins you think of Patrice Bergeron, so couldn’t be more happy for him. He’s a future Hall of Famer.

Thompson, on Bergeron’s 1,00th game:
Yeah, we all wanted to be out there to show respect for him and what he’s done for the league and what he’s done for this city. I’m just going to say I’m extremely happy for him. He’s got a long ways to go. I don’t think he’s anywhere close to done, but I love Bergie. He’s a great guy and I’m extremely happy for him.

Brendan Leipsic, on whether today’s game was a point lost or a point gained:
It’s disappointing. We worked hard to get a 2-1 lead going into the third and then kind of fell asleep there. Weren’t ready to play for the first three and a half minutes out there until we got our feet under us. You know, can’t sit back against a team like with some of their high-end skills. Obviously a little disappointing, but I guess we’ll take the point.

Leipsic, on what he did well to get pucks to guys in scoring areas:
Just trying to put pucks in good places to get ‘em back. Like you said, they play well in their own zone, they squeeze you off quickly, so whenever we can keep that puck moving in the O-zone and give us a little bit of space, go high to low, it helped us a little bit tonight.

Leipsic, on the Bruins being difficult to defend when they are cycling the puck:
They’ve got some players — Krejci, Bergeron, Marchand — guys who hold on to the puck, Pastrnak, they make plays and they put you on your back and they’re definitely a lot to handle. But I thought we did a great job throughout most of the game other than that three four, minutes that we kind of weren’t ready to play, so it’s disappointing, but we’ll move on.

Leipsic, on developing chemistry with his linemates:
I think we’re just keeping it simple. We’re getting back on our breakouts. We’re chipping pucks out a little bit and we’re putting guys with speed onto the puck and just trying to create turnovers. And then once we get those turnovers, try and get quick strikes to the net and get to those second and third opportunities. I think we did a little bit of that tonight. I think we can do a better job, but it’s a good step forward.

Leipsic, on Thompson’s goal:
Yeah it was, he found a little quiet area, he was able to put it into there and made a nice shot low glove and it was a big goal for us.

Oscar Fantenberg, on whether today’s point is a “good” or “bad” one:
I mean we had a lead coming into the third, so it’s kind of a bad one and a good one. We came back, but it still wasn’t good enough for what we had going into the third.

Fantenberg, on what Leipsic does well that doesn’t show up on the scoresheet:
He’s fast, he’s quick, he’s kind of low balance — kind of hard to get him in the corners and stuff because he’s pretty quick. I mean, he has good hands too. That’s his main focus I think and I think he’s good so far and he needs to improve getting the puck to the net and we were playing against him even in practice and he’s quick and fast, so he can move the puck and he can forecheck. He blocks shots and plays 200-feet. He’s a good player.

Fantenberg, on whether he gets any added validation from scoring goals:
I mean I had a couple of chances and it’s always nice to score and get on the scoresheet, but my main focus is to try and not let the other team score on me. So it’s good, but it’s not my main focus right now.

–With the overtime loss, Los Angeles fell to 43-84-14 all-time against Boston, a record that includes a road mark of 17-48-7. The Kings have points in 10 of their last 15 visits to TD Garden, going 7-5-1 with two ties. These teams will complete their season series in one week, February 16 at Staples Center.