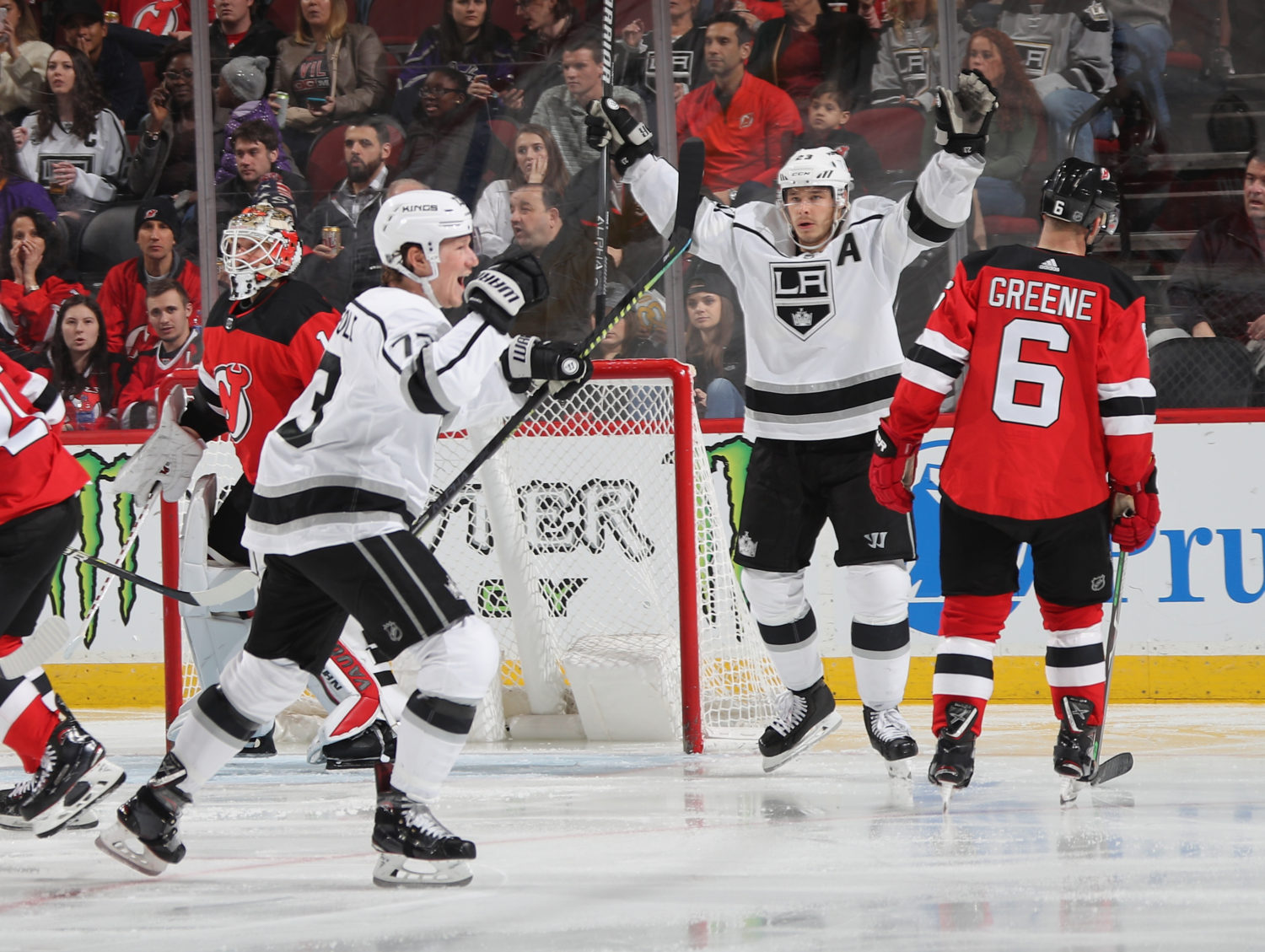 Willie Desjardins, on the purpose to the early third period power play, and what was discussed in the second intermission:
Well, I think it was good – Marco, he talked to ‘em. But, it’s good to see. Right off the start Kopi was bearing down and we got in right away and got set up, and Toffoli made a good shot.

Desjardins, on Ilya Kovalchuk’s reception:
Whenever there’s that kind of emotion, it’s good and bad. If you have that kind of energy for one person, it means he’s done something. Obviously he had a great career here, and the fans, maybe they’re upset with him, but they still had a lot of emotion for him, which is a good thing.

Desjardins, on whether momentum from Monday’s third period carried into the first period Tuesday:
A little bit. I thought we skated well in the first. I thought they were good early, I thought we played pretty good. They had a good second. We played a little better towards the end of the second, but they had a good start to the second. It was good to get that power play one, and then it’s funny how some nights you just can’t get ‘em to go in. Tonight they were just finding ways to get in for us. It was good for us tonight.

Desjardins, on whether Adrian Kempe and Tyler Toffoli scoring was something he “knew would happen”:
I don’t know if I ‘knew’ it’d happen, but they’re good players and I’ve always had lots of confidence in them, so it’s great to see them get rewarded. They play hard, they’ve both got good skill, so it’s nice to see them get something out of it finally.

Desjardins, on whether Dustin Brown went through concussion protocol after Blake Coleman’s hit:
No, it wasn’t protocol. I think he just got winded a little bit, so he … just had to go off and kind of re-gather himself.

Desjardins, on the energy on the second night of a back-to-back:
I thought it was good. I was worried early. The second period I was worried that we were getting tired and we weren’t moving very good. It’s amazing – you get a couple bounces going your way, and all of a sudden then you’re looking great. We were fortunate to catch those, but I thought our energy was good by the end of the third.

Tyler Toffoli, on Devils fans booing Kovalchuk:
I think he loves it. He doesn’t care what anybody says about him. He’s such a good teammate and I think all of the guys in the room were very happy with him scoring there at the end of the game.

Toffoli, on the energy on the bench towards the end of the third period:
I mean, when we’re up 4-1 there we obviously just locked it down. I don’t think they really got a whole lot and Soup made huge saves throughout the game that kept us in that position.

Toffoli, on whether anything was said to Kovalchuk before the game:
I think that he knew he was either going to get a really good reception or, you know, the one that he got. And like I said, I don’t think he really cared too much. He went out there and played his game and had his shots and had his chances and like I said, for him to put that in at the end of the game was a lot of fun for all of us.

Toffoli, on starting strong in the first period:
I thought we came out and had a really good first period. I thought the second period we kind of let off a little bit and they had some really good chances and like I said, Jack made some huge saves and kept us in the game, and then I thought the third period took over what was it — the first two and a half minutes? — and essentially I want to say put it away. I think we did a really good job and did the right things necessary to win tonight.

Toffoli, on Kinkaid previously having played well against the Kings:
Just keep shootin’. That’s my motto.

Jack Campbell, on whether he had to overcome nerves after not having played recently:
I felt pretty good. I thought we had a real good start and I just thought we played a real great game, so it felt good to just step in and the boys got a big win last night so I just wanted to try to do my part to help us get another one.

Campbell, on playing at Prudential Center for the first time:
Right. It’s pretty cool to experience that. You know, I can’t believe guys boo Kovy just because he’s the nicest guy in the world, but to see the game he had takes a lot of mental toughness and just shows his character and we all love him so, happy that he was able to score, and most importantly, won the game. So I know he’s most happy about that.

Campbell, on the team scoring three goals to start the third period:
I mean we’ll take it. That’s for sure. They still pushed hard. They have a real fast team, some dynamic players, and some guys who can really shoot the puck, so I thought we did a really great job played hard on them all night and it was just a big win for us.

Campbell, on tonight being the second night of a back-to-back:
I honestly thought we looked better tonight than even last night. We played a good game last night, but we were real slow in the first. Tonight we played 60 minutes and everybody played great, so we’ll take it.

Ilya Kovalchuk, on getting two points against his old team:
It’s good. Like I said last night, we’re desperate for the points. Doesn’t matter who we play. Tonight’s game was our third game in four nights, so there wasn’t too much energy there, but I think we played a good system and Soup made some great saves when we needed and the power play scored a big goal.

Kovalchuk, on what type of reception he expected tonight:
You never expect anything, but that’s okay, you know? That’s their emotions and that’s how they react, so I was doing my thing.

Kovalchuk, on whether it is challenging to tune out booing from opposing fans:
I was actually happy that I scored. That was the best answer.

Kovalchuk, on the highlight of his KHL career and his adjustment back into the NHL:
We won two cups there so that was the highlights and my adjusting was good. The start was pretty good, but then I slowed down a little bit so I tried to regroup and have a good end of the year.

Kovalchuk, on how long it took to feel comfortable back in the NHL:
With that group of guys, it’s really quick. You know we have some experienced guys here and whenever you play you just enjoy it and do your best.

Kovalchuk, on the energy level throughout the course of the game:
Yeah that’s what we were talking about between the second and third. Dewey’s telling us that that we’ve got to get our goals going and that power play was important on the good ice, so we did our good job to score two more quick goals so the game was over.

Kovalchuk, on not seeing many former teammates on the Devils’ bench:
Yeah, I think only two guys left who I played with, so the times fly. But the younger guys came in and they got that Hischier and all those guys. A really skilled group of guys there. So this year is not their year, but I’m pretty sure they have a bright future here.

Kovalchuk, on getting congratulated by his current team after scoring against his former club:
Like I said, we care about each other here. That’s the most important thing.

–With the win, Los Angeles improved to 56-34-15 all-time against the New Jersey franchise, a record that includes a road mark of 25-21-7. The Kings finished the season series with a 1-1-0 record against the Devils, with each team winning on the road.

–With third period goals from Tyler Toffoli (0:32, 1:07) and Dion Phaneuf (1:52), the Kings set a franchise record for the fastest three goals to begin a period in franchise history (112 seconds). The previous record was three goals in 150 seconds on November 4, 1972 at the New York Islanders.

–Jack Campbell has allowed 10 goals in his last eight starts, dating back to November 3. He leads all qualified NHL goalies with a .933 save percentage.

–With three assists, Anze Kopitar extended his point streak to five games (3-6=9). He recorded his team-best eighth multi-point effort in the win.