Was this the best back-to-back set the Reign have played so far this season? Ontario amassed 120 shots on goal across the two games, including 52 from tonight’s contest, skating to a 5-3 victory over the Colorado Eagles.

The Reign recovered well from a 2-0 deficit in the game’s first six minutes, but scored three goals in a span of two minutes and 19 seconds to take a 3-2 lead into the first intermission. After a Colorado goal late in the second, Ontario got a late game winner from forward Brett Sutter, followed by an empty-net tally from AHL All-Star Sheldon Rempal to seal the deal with a 5-3 victory.

Forward Matt Moulson scored two of Ontario’s three goals in the first period and has now tallied eight goals in his last seven games played. Sutter collected the other goal in that stretch and posted his second multi-goal game of the season, with Moulson accomplishing the feat for the fourth time. Goaltender Peter Budaj turned aside 24 of 27 shots to earn the victory, his fourth of the season.

Had it not been for yesterday’s 68 shot output, today’s total would have been Ontario’s highest of the 2018-19 season. Matt Roy led all skaters with nine shots from the blueline, while Sean Walker was second with seven. Walker will now be joined by Rempal on a red-eye flight this evening across the country, with the two skaters representing the Reign at the 2019 AHL All-Star Classic tomorrow and Monday in Springfield, MA.

The rest of the team is off on their All-Star Break – Ontario is scheduled to return to the ice on Thursday at Toyota Sports Center, in advance of a back-to-back set this weekend, beginning on Friday in San Diego against the Gulls, and concluding on Saturday at home against Bakersfield for Pink in the Rink Night. Fans can get a Pink Pack for Saturday’s game that includes a donation to San Antonio Regional Hospital Women’s Breast & Imaging Center.

Matt Moulson on if this weekend was the best back-to-back set the team has played this season
I’m not sure, but they were pretty good games. I thought last night we played better than tonight, it’s weird how sometimes it works out like that. [Spencer Martin] obviously stood on his head last night but it was a gutsy effort tonight, obviously down two early we kept coming so I thought we played well and can hopefully build on this moving forward.

On the high shot count over the two games and if the team will find offensive success if they keep doing those kinds of things
Definitely. You’ve got to get shots to get goals and get guys to the net. I think tonight, we did a better job of getting guys to the net while we’re getting shots and ended up with a couple around the net. You’ve just got to keep doing that, a couple of nice plays, and I think we’re exiting out zone pretty cleanly and that leads to some good offensive chances.

On his line with Mike Amadio and Matt Luff
They’re two great players. I played most of the year with Mads last year and he’s one of the smartest players I’ve seen play the game of hockey, so it’s pretty easy to play with him. Luffer, he just keeps stepping up his game and improving from where he was last year. I thought our line even played better last night than we did tonight, but it was a lot of fun to play with those two.

Mike Stothers on whether this was the best back-to-back performance the Reign have put together this season
I don’t know, I mean it was pretty darn good. Yeah, you might have to say that. We had a totally different lineup than we’ve had. Usually, we’ve been understaffed because guys have been up with the Kings and now we’ve got some guys down and I think it made a difference, but you know what, it was great hockey from both sides. That’s a darn good team, Colorado, holy smokes can they skate. I thought it was awesome. I think we had over 50 shots again tonight, it means we were creating some good things. It’s a good way to go into the break, I’m happy for the guys and it gives us something to build on when we come back.

On going into the break off of a victory
There’s no better feeling than winning, so regardless of what you’re doing, even if you’re not going on an All-Star break, if you’re just going to practice the following Monday, it’s nice to win. I think it’s important for our group, we haven’t experienced it enough. I think we’ve deserved better in some of the game and sometimes maybe we’ve gotten what we’ve deserved, but it’s a good bunch of guys and they care. They want to win, they want to play hard and they’re doing the best they can. It’s nice to see them get that.

On Nikita Scherbak moving back into the lineup after being scratched last night
I wanted to motivate him. That’s what you do. You take something away and then you give it back, you tell him “show me”. It was tough for him. He [went on waivers], goes to the Kings, didn’t stay there as long as he wanted to and he came down here and I’m sure his ego was a little hurt, his feelings were a little bruised, but you’ve got to come here with the right attitude. I think [tonight] was more liking to what he needs to do and what we want to see out of him. It was good, it was fun to watch him play.

On the 120 shots this weekend and building off of tonight’s game when the team gets back next week
Well, 120 shots, I would’ve liked to have seen us get at least one more win out of the deal, but it’s so hard, this league, this development process, it’s so hard on the guys. There’s ups and downs, ebbs and flows. We had a little bit of success this weekend and we’re going to enjoy it, but we know that we’ve still got a lot of work ahead of us. Part of it is getting some pucks to the net. Sometimes, you don’t get that many pucks to the net and you actually win the game, it’s funny how the game works, but you definitely have a better chance of winning if you get some pucks to the net. 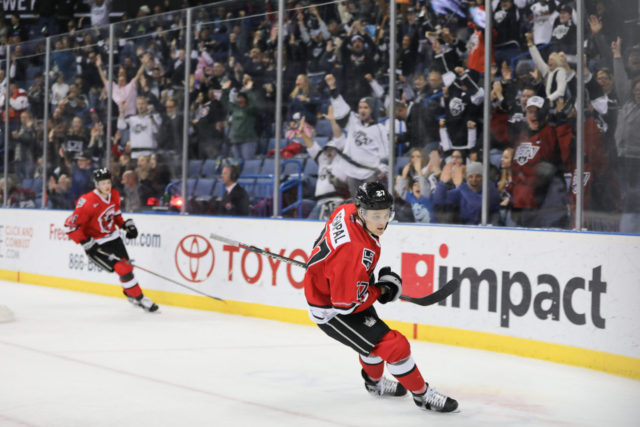 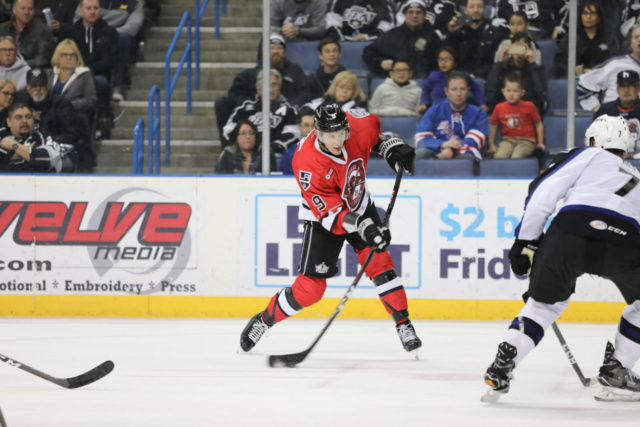 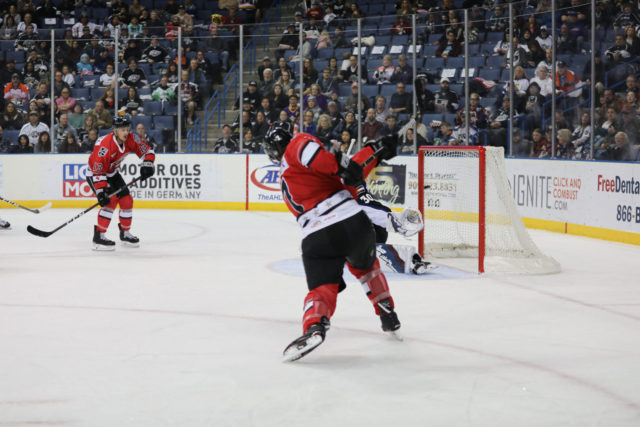