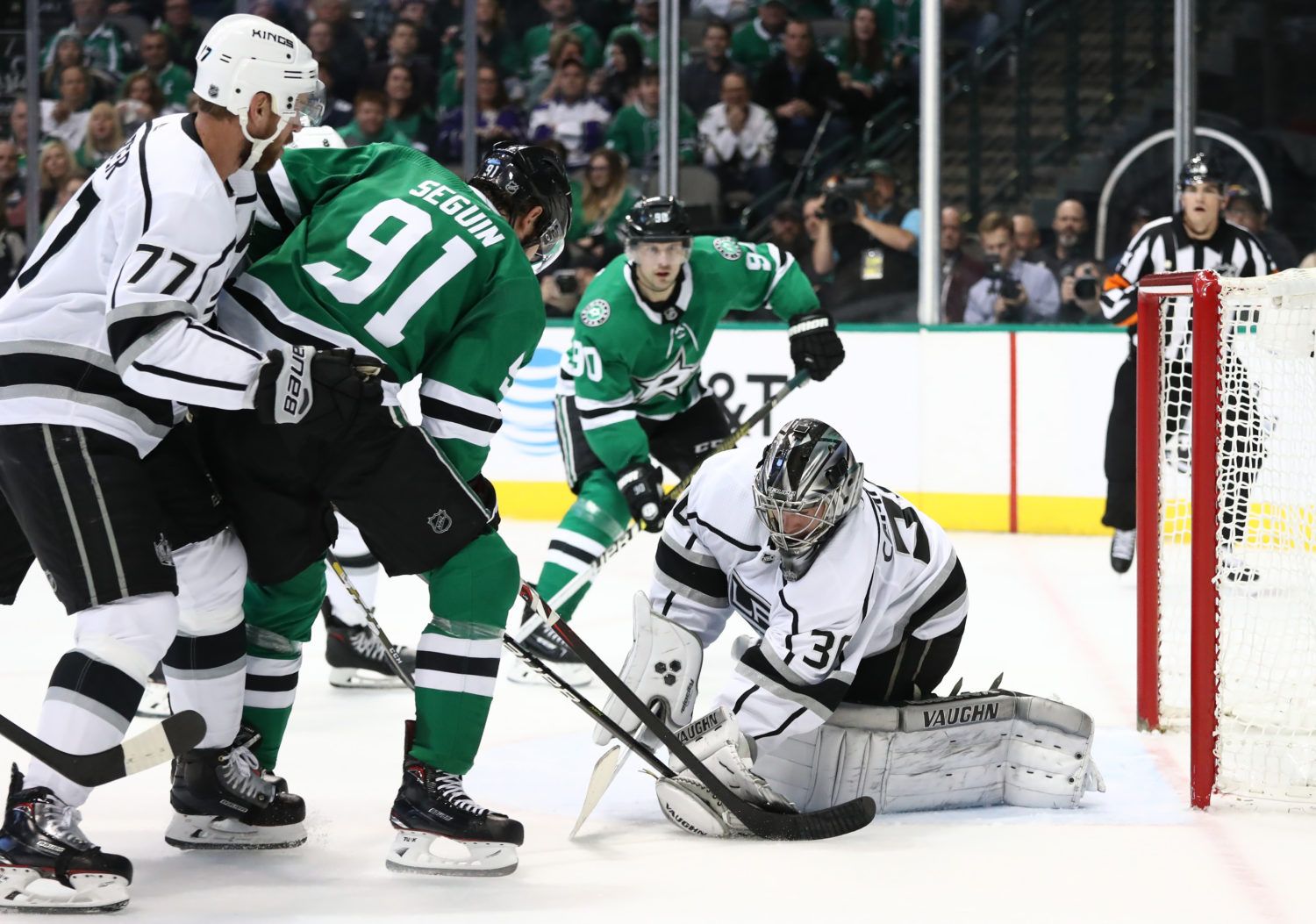 Desjardins, on allowing 11 shots through the first two periods:
Yeah, it was good. They’re an explosive team, they’ve got some really high-end guys back there. They join the rush so well. I thought the first two the boys played great, and then we just sat back a little bit in the third.

Desjardins, on the Jack Campbell storyline:
Yeah, we all follow that story. Jack, he’s really turned his career around, and for him to come back here in here and get a win, it’s got to feel good for him.

Desjardins, on the importance of Carl Hagelin scoring his first goal as a King:
Yeah, it is. He’s battled for us. Came back from injury and things hadn’t gone quite as well for him since he’s been back, so it was nice to see him get one.

Desjardins, on Campbell being well liked by his teammates:
He’s well liked. I think all our guys appreciate each other. He’s battled hard for us, too. When Quickie went out the season didn’t look very good, and he came in and played well. The guys always appreciate when somebody does that, and he’s been thrown into some tough situations. That Vegas game was a tough game, and he’s responded well for us.

Drew Doughty, on how much Jack Campbell deserved tonight’s win:
… He works his bag off in practice and all the accolades and all the success he gets, he absolutely deserves. He’s a great person, a great teammate and works his bag off, like I said. And that’s why he’s so successful.

Doughty, on the team’s slight lapse in the third period:
We’ve got to fix that. You know when we get leads, in the past, we were able to always shut those leads out and never let teams back in the game and this season, for whatever reason, in the third period they seem to always dominate the third if we’re winning and then they’re getting opportunities to come back in the game and we need to clean that up. That’s something that we need to clean up if we want to win more hockey games and get into the playoffs because if we keep doing that it ain’t going to work that way.

Doughty, on the impact of getting an early goal on the power play:
Yeah, that was huge. We’ve been working hard at the power play in practice every day and you know the guys on the power play are usually obviously our top players and we feel that we need to make a difference to win the hockey game. You know, tonight we decided to simplify it, try to get a puck at the net first five to 10 seconds of the power play. I just had that opportunity and Brownie’s always done a great job at the net and good tip by him to put it in.

Doughty, on whether he saw Dustin Brown tip his shot:
No, he said it hit is hand or something or went off his wrist or something like that, so yeah, he could be lying and just stealing my goal you know.

Jack Campbell, on what it means to beat his former organization:
It just means a lot to do it with this group, you know, we need points right now and I thought everybody played great so it’s just great to get a win.

Campbell, on facing 19 shots in the third period:
I mean they have some talent over there, so we played a heck of a game. First 40, I think couldn’t draw it up any better, especially against that group, so you know it was just a great team game. I thought they made a push in the third, but that’s just hockey and I thought our guys battled hard through it and even though they got shots, I thought we competed really hard and that’s what Willie talked about before the game was just raising that compete level and I thought everybody did that.

Campbell, on what Doughty said to him after the game:
He was just pumped. I mean, obviously I’m pretty sure everybody in the hockey world knows my story, and how it didn’t work out here and they wanted it for me which was just a great group, but I just wanted to win because we need it. But everybody just battled so hard so it was fun to be a part of. It means a lot.

Campbell, on taking in the atmosphere during warmups:
I don’t typically look in the crowd to be honest, but I backed up a few times here and it’s kind of allowed me to settle in a little bit before I played my first game. But you know it’s a fun building. It’s a great building and I thought it was a good hockey game. Just battled hard and it’s fun to be a part of.

Campbell, on whether tonight’s game allowed him to close the chapter on his time in Dallas:
Yeah, it’s a great question. You know, of course that was my goal [to play in Dallas]. Nothing more I wanted at 18 or 19, 20, 21, 22 was to be the franchise goalie here and it didn’t happen. But it’s great to come back here. I still have a lot of great friends over there and it’s fun to play ‘em. They’re good players so it’s nice to compete against them and battle for a win.

Campbell, on whether he was expecting there to be a high number of shots in the third:
I mean you kind of expect it all game, even when it’s five minutes left in the second or you know five minutes left in the first. You know that they haven’t generated a lot. That Seguin, Benn, and Radulov, those guys, Spezza, they’re all looking for offense and they can turn at any time, so I just thought we did a great job as a group on ‘em and they got some in the third, but we just battled hard.

Carl Hagelin, on scoring his first goal with the team:
It was nice. You’re always trying to contribute offensively as much as you can. And we’ve had our looks and I’ve had my looks, so it’s nice to finally see one go in.

Hagelin, on getting his first goal since October:
Yeah, I mean, yeah. I scored one pretty early and then I didn’t score for some games and then I got hurt, and then we’re in January now.

Hagelin, on the play that led to his goal:
Yeah, I mean we lost the draw, but I jumped on Klingberg and gave it to Tyler and he made a good move there to just get the puck to the net and I jumped on the rebound.

Hagelin, on if he thinks Campbell was particularly motivated against Dallas:
I think he’s been good ever since, I mean he hasn’t played that many games since I’ve been here, but the game that he played against San Jose, in San Jose he played great and tonight he played great.

Hagelin, on how well-liked Campbell is in the room:
Oh yeah. I mean I can sense that right away. I asked around, I didn’t know how long he’s been here, it feels like he’s been here as long as the guys that won the cup in 2014 and 2012. I guess he hasn’t been here that long and it just shows if you’re that big of a presence that early into your career into being a part of a team, that means a lot.

–With the win, Los Angeles improved to 89-106-41 all-time against Dallas, a record that includes a road mark of 38-62-19. The Kings have won road games in the series for five consecutive years and are 15-5-3 in their last 23 visits to American Airlines Center. On the other side, Los Angeles is just 1-5-0 in their last six home games in the series. Each team is 1-1-0 in the season series with one game remaining, February 28 at Staples Center.

–Carl Hagelin scored his first goal as a King and first overall goal since Pittsburgh’s 3-2 overtime loss at Vancouver on October 16. He finished with a game-winning goal, one shot on goal, six shot attempts, one hit and a plus-one rating.