INSIDERS. A pleasant Tuesday afternoon to you from St. Paul, where Nick Nickson, Alex Faust and I sat down for lunch a short time ago, and yes, all three of us ordered pepper noodle soup. Related: tonight’s game will be nationally broadcast (5:00 p.m. PT / NBCSN / NBC Sports App / LA Kings Audio Network), with Faust and Jim Fox on the call. On-ice, there were no changes to the lines or pairings at this morning’s skate at Xcel Energy Center:

–The vitals: Jonathan Quick left the ice first and is expected to start in goal versus Minnesota, against whom he is 13-7-4 in his career with a 2.57 goals-against average and an .898 save percentage. Paul LaDue, Sean Walker and Austin Wagner were extras during line rushes and remained on for extra work with Jack Campbell. What’s the plan for splitting goaltenders? “It always depends as you go along,” Willie Desjardins said. “Right now, Quick, when he’s able to play, he’s the guy we’re playing. I think Campbell’s played well, though, and deserves to play as well. This trip we’ll kind of watch how we see the workload and that, but Quickie’s been good for us, and I think right now it’s his job to go.”

–Their vitals: Minnesota did not hold a morning skate after returning from Philadelphia, where they lost to the Flyers 7-4 on Monday night, giving them back-to-back losses against the Red Wings and Flyers, two teams that aren’t bound for the playoffs. Up next: the 18-25-3 LA Kings. On the goalie front:

No morning skate for the #mnwild, so no starting goalie questions.

Originally supposed to be Stalock. That conceivably may change

–The LA Kings remain in last place in the league with an average of 2.26 goals per game. Their top line has been mostly productive of late, but the second line has been challenged to score throughout the year, with tonight’s grouping having combined for just 15 five-on-five goals this season.

But there’s an interesting mix below that, if we are to grade on a little bit of a curve. And perhaps this is just a way of saying “Matt Luff and Kyle Clifford have found the net,” but Los Angeles has three seven-goal scorers in its bottom six. One of those is Tyler Toffoli, who, if everything was going swimmingly, would not be playing on the third line. His seven goals this season are a disappointment. But Luff and Clifford both have seven and rank first and second on the team in five-on-five goals per 60 minutes, with Clifford averaging 9:12 of five-on-five ice time per game and Luff 10:50.

“Our line’s playing really hard and we’re playing smart hockey,” Clifford said. “I think as a line, we’re more focused on generating offense for a team because that’s the new game. You’ve got four lines that can run and play. You look at all good teams, their fourth line’s got anywhere in that five-plus goal range, each guy. You need a depth team to have a special team in this league, so it comes from top to bottom.”

In the quote-unquote new NHL, checking and energy lines have evolved. All lines have to be able to skate, all must present a scoring threat. And that’s been helped this season by Clifford and Luff, who’ve hit commendable high marks. Luff’s seven goals have come through his first 29 NHL games; Clifford’s next goal will mark his career-high. Clifford fits more of a description of a “fourth line” player, but that doesn’t necessarily mean that a certain quota of production is targeted for individual lines in advance of the season or recalibrated midway through it.

“I don’t know if you have a ‘set number,’” Desjardins said. “I think you have certain expectations of production – who’s going to produce and who’s going to get lots of chances. You can’t always guarantee goals, but creating chances is more of an accurate way of finding out how a line’s playing. The Kopitar line has been pretty consistent in generating. The last few games, just with the way we’ve structured both, the Kempe line and the Carter line have been good. And then Thompson’s line’s contributed, too. We have pretty good balance right now out of all our lines. I think that one game, I think we had four goals and we had a goal out of each line. That’s nice to have, but you still need a dominant line. You still need one line that you can always count on.”

That’s not Clifford’s line, though the forward has shown the versatility to be able to jump up the left side of the lineup when needed, as evidenced by his alignment to the port side of Jeff Carter earlier this season. But depth scoring is important and certainly something that had been lacking from the team’s game over the past two-plus seasons.

“You look at a team like Tampa, they have a pretty solid identity, a four-line team that plays hard and puts the puck in the net, as well,” Clifford said. “They’re a team that’s build from top to bottom, and I think we’re trying to build that and produce more. Obviously where we’re at in the standings and goals-for is not where we want to be, so we need to produce more to win more games.”

In his first eight seasons, Clifford ranged between three and seven goals, so with seven goals through the first 36 games this year, he’s on pace to blow away his previous high-water mark even as his shot rate has essentially remained unchanged. It’s interesting, though, to note that Clifford had seven goals in his 19-year-old rookie season, followed by an additional three goals and five points in six games that spring in a first round loss to San Jose.

“Obviously, I had a really good year that year, and they just wanted me to build my game out and be a more complete player and provide that secondary, third offensive-type role and help the more veteran guys who can score,” he said.

He’s always been a player with a firm constitution and identity as a player, and this season has been able to match the work and leadership with cold, hard production.

“I think on a personal level, everybody wants to do well because it helps the team. Good teams have lots of players that take a lot of pride in their game and they’re pushing for highs, and it’s good for your team, but as a player you’re always trying to improve your game,” he said. “This year I’m just really trying to provide more and build my game out more than just being a difficult fourth line grind guy.”

–The Kings, like many teams, have been riding the four-forward power play look, which has pushed several familiar faces off the man advantage. One of those players is Alec Martinez, who averaged between 1:15 and 2:10 of power play time on ice per game from 2010 to 2018 and hadn’t averaged less than 1:57 over the previous five seasons. His 39 power play points over the previous three season rank fourth on the team and second among L.A. defensemen behind Drew Doughty’s 63.

But Martinez hasn’t factored into the man advantage since returning from his upper-body injury, bringing his season average down to 59 seconds per game. What’s up with that?

“Well, I like our power play guys,” Desjardins said. “Right now, Muzzin’s been great on that power play, Doughty’s a good power play guy, so that means if you’re going to put Marty in, that means you’re going to have to take a forward off, and I think right now we’ve got some pretty good forwards out there. Can Marty play it? For sure he can. He’s a guy that I don’t have any worries if somebody’s not there and we need to throw him up, but right now I like how the four forwards look and the one D.”

Former King d-man Davis Drewiske visited the Kings morning skate today with Tate Dillingham and his family. Tate is unfortunately facing a serious medical issue but that was forgotten this morning as he, his sister and his parents visited the Kings locker room. @D_Wisk pic.twitter.com/VQCOO8P8If

Willie Desjardins, on getting into town in advance of the team they’re playing:
It happens every once in a while. For sure it’s happened to us. But they played in Philly last night, got in late, so they didn’t skate today. It’s a chance we have of being fresh at the start and getting after ‘em right away, so we’ve got to make sure we use that to our advantage. [Reporter: Do you notice it when a team is on a back-to-back the second game?] It depends. We’ve had nights where we thought we would be sitting in a good spot because teams played back-to-back and we didn’t perform as well. We’ve won games, too, when we were on a back to back, the other team was resting. I don’t know how big a difference it makes, but I know it never just happens. You can’t just go ‘we’ll they played, so it’s going to be an easy night,’ because it’s never an easy night. You have to make sure you’re ready to go, and if you do, you can take advantage of it, though.

Desjardins on maintaining the energy and competitive level:
I think you look at the team. It’s a good team that we’re coming in. This is a tough building, so they’re going to play well. That’s the bottom line. For us, we have to know that and we just have to respect that. It comes down to can you accept being average? Can you accept not finding ways to win? And if you can’t, one of what it means is you’ve got to be passionate and you’ve got to be ready at the start of the game. That’s something that we have to do. If we want to win, we have to be passionate early.

Desjardins, on Kyle Clifford, Matt Luff and depth scoring:
Yeah, both those guys have had pretty good years so far. Both guys have contributed to scoring, and it’s a tough league to score in. Whenever you’re getting contributions from there, you have to be happy. Those are guys, their minutes aren’t big minutes. It’s great to get that contribution. You’ve got to give those guys lots of credit.

Desjardins, on Ilya Kovalchuk and the top line:
The one thing you’ve got to like about Kovalchuk is just his ability to produce. He sees the ice, he makes passes that other guys don’t make, and that’s what they like about him. I think as a line, Kopitar, him and Brownie, they’ve played together for a long time, so it’s kind of who you play with ‘em. But I think they feel they can produce more, too. They’ve been good for us – if you look at the scoring, they’re always in there scoring, so it’s good. Kovalchuk, he’s a guy that just has a lot of creativity. [Reporter: Has his play – Kovalchuk’s – been more consistent lately?] Yeah, I think it has. It gets more consistent, too, once you stay with the line a little bit and find a spot, so I’ve tried to keep them together a little bit. Some nights you don’t always do that, but I think Kovalchuk with those two guys, he’s pretty creative and I think he can add to them. [Reporter: He’s had a lot of chances these past few games. Is he just due for one, do you think?] Yeah, he’ll shoot the puck. He’s a guy that’s a little bit of a streaky scorer, so hopefully he’ll get hot and get a few. 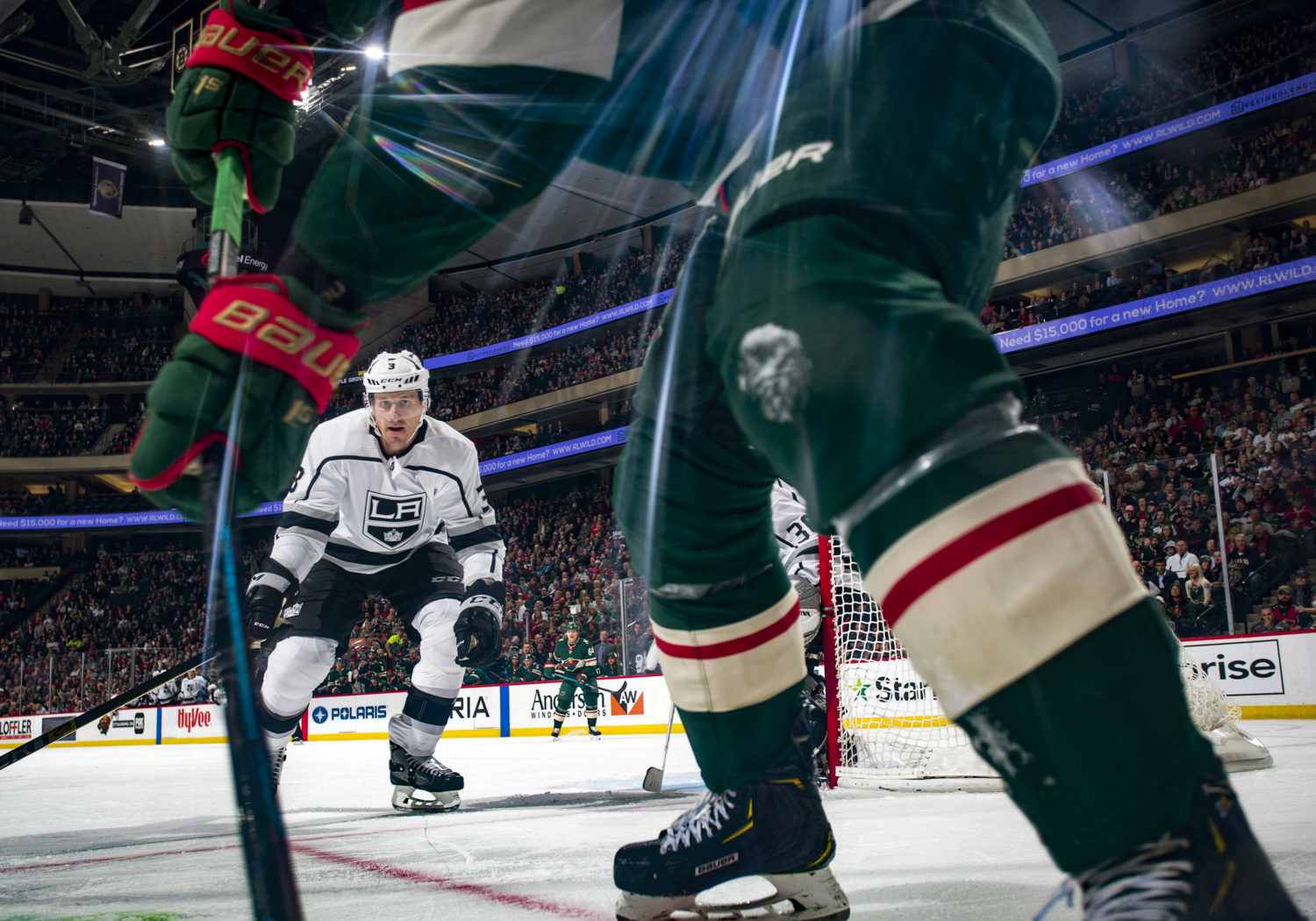