Scherbak on waivers; Kempe practices after collision; Martinez “within a week” 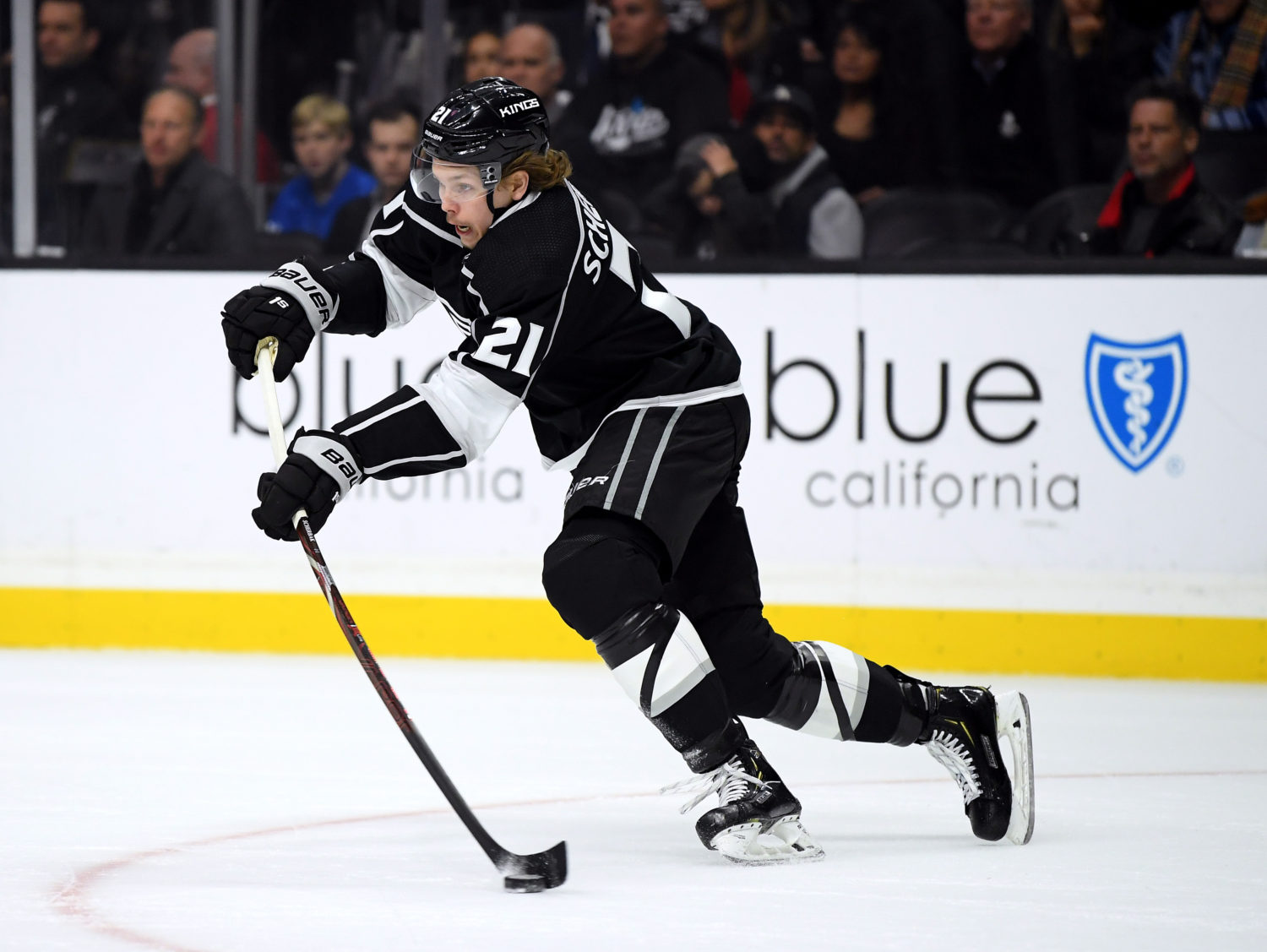 INSIDERS. A fine January 6 to you and yours. The LA Kings convened at Toyota Sports Center for an optional 11:00 a.m. practice before loading the plane and heading north to San Jose in advance of tomorrow’s game against the Sharks, which will be broadcast by Alex Faust and Jamie Baker at the SAP Center on NBCSN. I finally heard a split NBC Kings-Sharks broadcast while home on parental leave and really enjoyed the Randy Hahn and Jim Fox give-and-take, so here’s to Faust and Baker joining forces for an entertaining 60 minutes in the re-match.

–Nikita Scherbak, who has one goal in eight games with Los Angeles, has been placed on waivers. “I like his skill, I like his attitude. He’s got a good attitude, he wants to get better,” Willie Desjardins said. “Last game he laid down and blocked a shot. He was a long ways away. That’s something you usually wouldn’t do, but he’s doing it because he wants to play. But, right now he’s not quite at the level we need him, so it’s good if he goes down. He can improve. Hopefully if he ever gets his game on track, he’d be a guy that can help us.”

Until he clears waivers or is claimed by another team, he remains on the active roster, which is full for the time being at 23 skaters. Eventually Los Angeles will activate Alec Martinez (upper-body), but expecting that to happen in advance of tomorrow’s divisional rivalry game might be just a little bit of wishful thinking.

“[Martinez is] not quite there yet, but we should see him within a week, I would think,” Desjardins said. “He’ll be back quick.”

But the types of conversations that Desjardins had with Scherbak this morning aren’t easy, especially for a former highly touted prospect selected 26th overall in 2014.

“You sit guys out, guys never forget that. You’d sit them out, it’s really personal to them and it shouldn’t be, and that’s a hard thing to do,” Desjardins said. “With Scherbak being a young guy, especially when you see how bad he wants it, it’s hard. But the only way he’ll get to where he wants to go is by getting down and playing games. Like he can’t get there up here because he doesn’t get what he needs. It may be hard, but it’s the best thing for him.”

–To say that Adrian Kempe tumbled awkwardly into the boards after getting his left leg locked with Adam Larsson’s in a race to the puck isn’t to do real justice to the visual severity of their collision. Yeesh:

Kempe may have gained some page views for tending to his hair mid-fight with Brendan Smith, but he’s also capable of playing a more hardened game than the tousle tussle suggests. He actually won a long race to the puck against Larsson immediately prior to the collision, and after stretching his leg out on the bench in pain, returned to action.

“It looked worse than it was, so that was good,” he said. “It hurt a little bit right away, but I’m fine. The replay looks just pretty gross when I looked at it by myself, too. So yeah, good thing I’m flexible, I guess.”

Some might have taken a maintenance day, but Kempe was among those to skate in an optional practice before the flight north.

“When it happened I thought I was going to get hurt, and that’s what everybody else thought too, but it didn’t feel that bad, so obviously you want to get right in there again,” he said. “So that’s what I did.”

While he was on the ice Saturday, he was effective while earning a regular five-on-five shift. The Kings were lifted by a strong performance team-wide, but Kempe reconnected with Carl Hagelin and Tyler Toffoli to spend a good amount of time in the offensive zone.

That doesn’t encapsulate his entire game; even when Kempe isn’t scoring, he’s usually an effective forechecker and is qualified to adhere to many of the defensive responsibilities as a center. But the Kings need faster and more skilled, and Kempe possesses game-breaking individual speed and has shown, at times, an ability to beat goaltenders.

“He has such an upside to his game,” Desjardins said. “He’s a player that can be such a good player for us, and I think he’s just trying to find where he is. Like, we’d be moving him a little bit around. I had him on the wing a little bit. I don’t think that was great for him. When you go to different tournaments, you always get it where centermen will be playing the wings. It’s not a bad thing for him to experience that. He’s a guy that he’s still young and he’s growing, and consistency is the biggest thing. For me, if you see it once, then you can see it again. You can see it in him, and that’s a good sign. I think he just has to get it so he’s doing it every day.”

–Hagelin had a good look in the third period on Cam Talbot that trickled just wide of the far post and finished with one shot on goal and one blocked shot over 15:03 in his first outing after missing 20 straight games due to an MCL sprain. “He gives us some stuff that we’ve missed. It’s good to get some more speed in our game, and he gives you that. I think saying that, whenever you’re out for that long, you’re not going to be on top of your game when you come back, so I thought he was OK, but it was great to get him back in our lineup,” Desjardins said.

Willie Desjardins, on what the team did well to contain Edmonton’s top players:
We did, but a big part comes from Drew and Forby, who were back there a lot. Drew most of the time, I guess. When I was in Vancouver, I always looked at Drew as an offensive defensemen. That’s how I always saw him. He’s great defensively. He’s a really good defensive defenseman. He defends well. So, it’s nice when you put him on against a guy like McDavid because he skates well, and Drew’s so competitive. He’s just a good match-up guy.

Desjardins, on whether he likes working with impressionable players and watching them develop:
I don’t think you like working with it, because you always want it to be at the top, but you do like working with guys that have a good upside, and he has a good upside. If you know a guy is never going to be a great player, it’s more fun to work when you can see a guy has a lot of potential and [can] move up. Every player you think can get more, so it’s not like you ever see a guy that you don’t think you can work with or get him better, but Kempe, for sure, he has a big upside and that’s exciting to be able to work with that.

Kempe, on playing center, and his faceoff work:
I like playing there more than I like wing right now, so I’d kind of like to be there more. Yeah, the faceoffs part are a big part and I’m improving I think and need to get better on it, but overall in the game I like center a lot and I like to be in the middle. 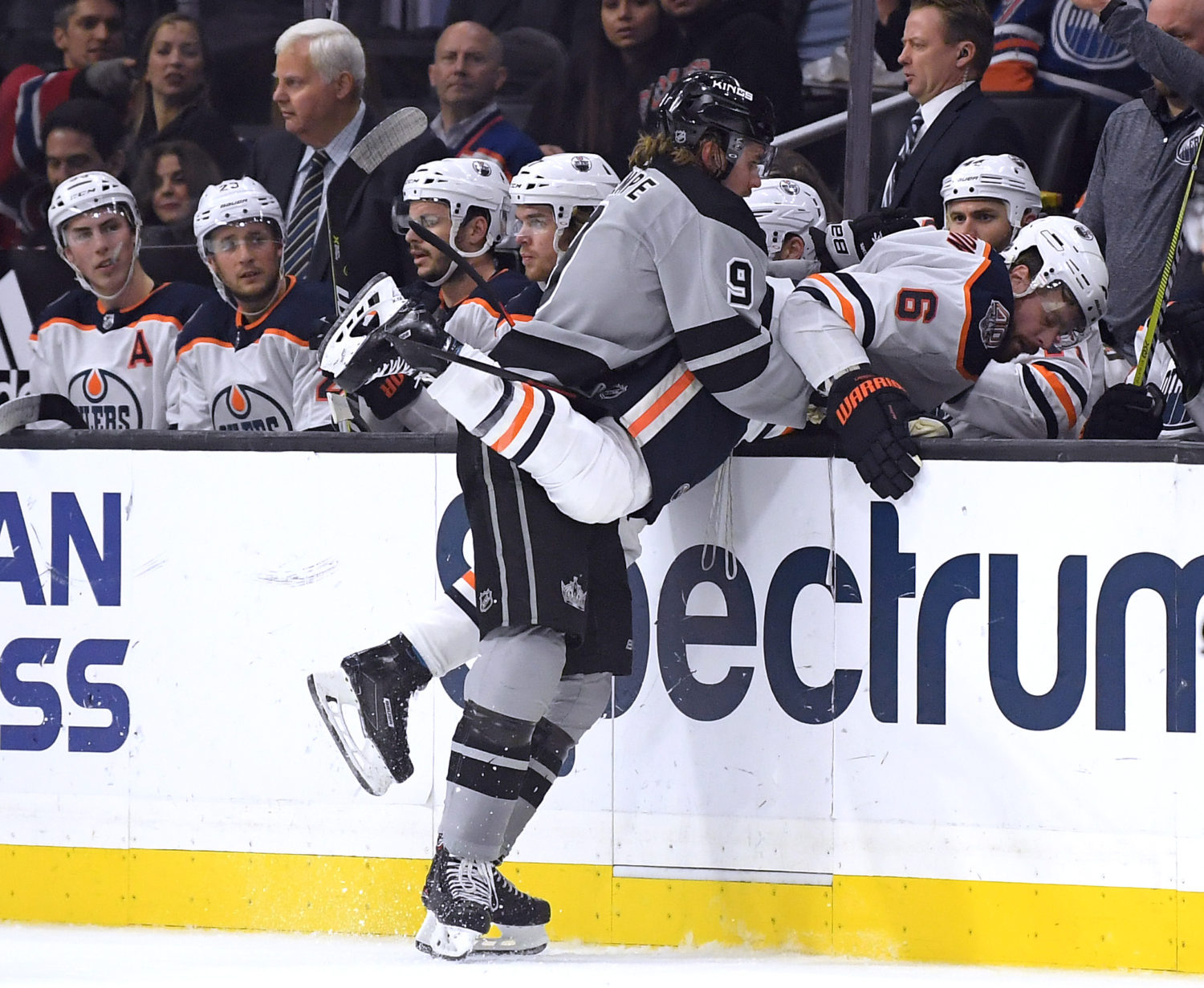