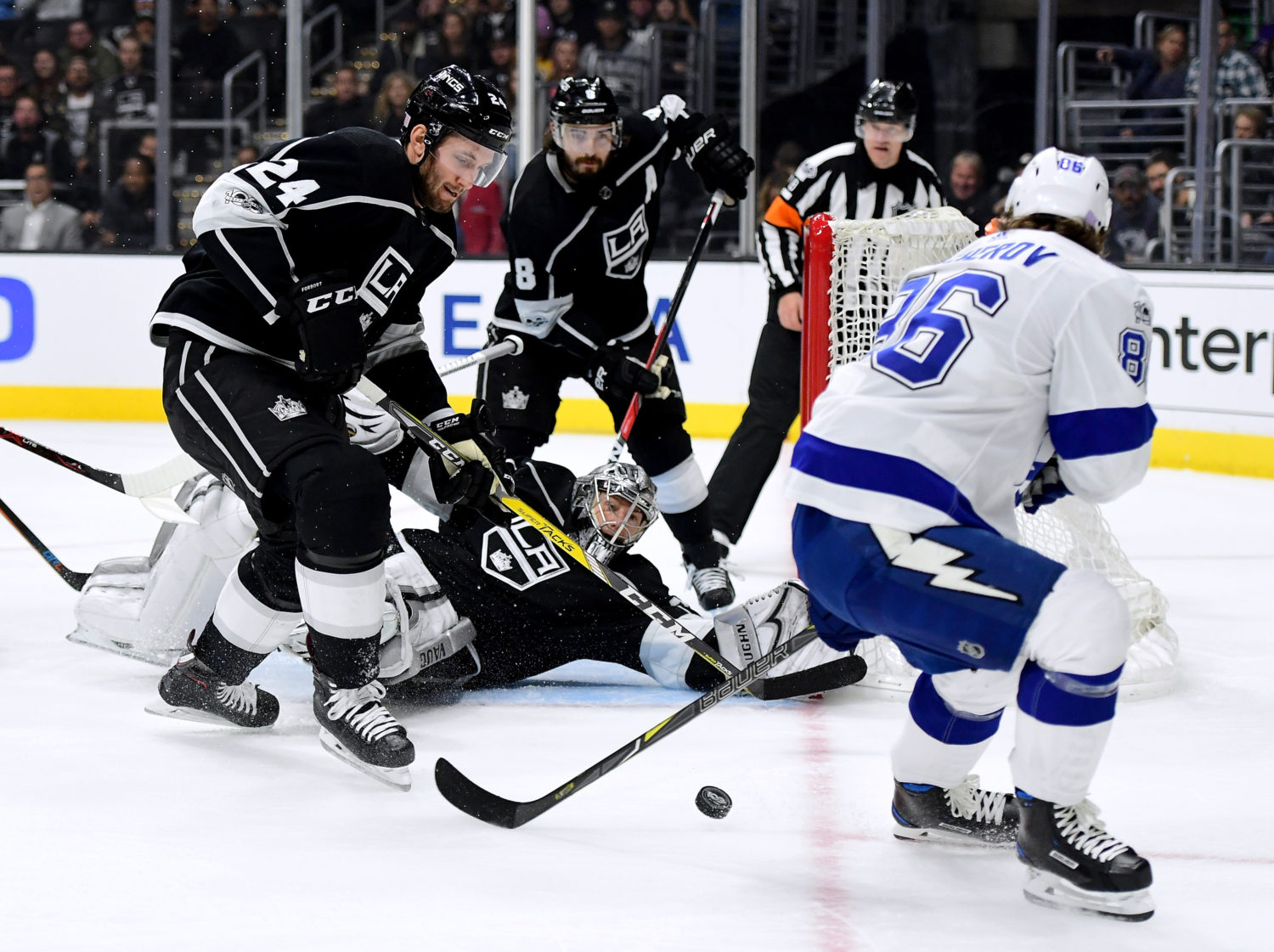 INSIDERS. A very pleasant mid-day to you from our LAKI HQ at Toyota Sports Center. The LA Kings have a stiff test tonight against the Tampa Bay Lightning (7:30 p.m. / FOX Sports West / FOX Sports app / LA Kings Audio Network), who are 14-0-1 in their last 15 and lead the NHL with 64 points, 10 more points than the second-place teams, Toronto and Calgary. In advance of tonight’s game, the Kings lined up as such at their 10:00 a.m. morning skate:

–The vitals: Jonathan Quick was the first goalie to leave the ice at the morning skate and is projected to start against the Lightning, against whom he is 6-3-1 in his career with a 1.72 goals-against average, a .938 save percentage and one shutout in 11 outings. With 299 career victories, he’s again vying for his 300th career win. Paul LaDue and Kyle Clifford remained on the ice for extra work with Alec Martinez (IR/upper-body) and Carl Hagelin (IR/MCL sprain). Dustin Brown is scheduled to play in his 1,077th NHL game tonight, which would tie Luc Robitaille for the second most games in franchise history.

Hypothetically, Brown could surpass Taylor with his 1,112th game played on March 28 at Vancouver, while Kopitar could reach game 1,000 on April 1, 2019 at home against Calgary, if both play in every game between now and then. Keep in mind these are facts and figures, not jinxes, and have no outcome on whether or not these players reach their milestones.

–Their vitals: Tampa isn’t holding a morning skate today. Brayden Point took a maintenance day yesterday and did not skate; against Anaheim on Monday night, they lined up with Palat-Stamkos-Killorn, Johnson-Point-Kucherov, Erne-Cirelli-Gourde and Joseph-Paquette-Callahan up front with a back end of Hedman-Stralman, McDonagh-Cernak and Coburn-Girardi. 20-year-old defenseman Mikhail Sergachev, who totaled nine goals and 40 points in 79 games as a rookie last season, was healthy but did not face the Ducks on New Year’s Eve. JT Miller is week-to-week with an upper body injury and remains on injured reserve. Hard-hitting 21-year-old Erik Cernak, acquired from Los Angeles in the Ben Bishop trade, has seven assists and a plus-10 rating in his first 21 NHL games. The 6-foot-4, 225-pound right-shot defenseman is averaging 17:52 per game.

–Los Angeles’ all-star representative, Drew Doughty won’t mind hearing the boos when he heads to San Jose later this month for the 2019 NHL All-Star Game. “I was thinking about that already. I’m sure I’ll get booed,” he said. “You know what? I get booed sometimes even when we’re playing a normal game, so I’ll be ready for it, and it makes me laugh. To be honest, I love getting booed by the other team, so it’s great.”

With three goals and 22 points through the latest 41 games of his club-record 369 consecutive games played, Doughty has neared his familiar marks offensively amidst a league-best 26:41 of ice time. This may not be his signature season – he’s 16 points off last year’s record point-producing pace, doesn’t have an even-strength goal and is a minus-player for the first time since 2011-12 – but has left an impression on his coach.

“He’s been exceptional, and I think you always look at Drew on the ice and how well he’s played, and he’s been really consistent throughout his career,” Willie Desjardins said. “Coaching against him, he’s a guy that always created something. He was a guy that was always making things happen. But for me, it’s been really great to watch him off the ice and what a good leader he is and how much he cares about his teammates. He has a lot of passion for the game, and it’s always great to see passion, but he’s one of the best I’ve seen.”

This will be Doughty’s fifth straight All-Star appearance, all of which have taken place in consecutive years.

“To be honest, it’s awesome being selected and being a part of it, but just getting there and hanging out with other guys on other teams, picking their brain about stuff, what’s going on around their team and their organization and bringing those types of things back here. I just love interacting with other players and getting to know them. That’s the most fun for me, and then obviously being able to bring my family there and then celebrating being selected with them is obviously very special, too.”

More from Doughty on the All-Star Game and Tampa’s playmaking is below.

–If we were judging by pure merit, Jake Muzzin has probably been the Kings’ best player this season. He leads the defense with four goals, is on pace for 26 five-on-five points on a low-scoring team, leads the club with a plus-eight rating and has the best possession rates out of any regular blue liner. But the All-Star Game isn’t chosen based purely on merit, it’s chosen both by fans and the league as a means to promote and exhibit the game, and both parties are inclined to defer to league stars. In other words, it’s going to be awfully hard for players like Muzzin – or, say, Oskar Klefbom on Edmonton or Hampus Lindholm on Anaheim or Nate Schmidt on Vegas – or any of the other completely competent defenders that fall just short of gaining that subjective “elite” status to make the team. Heck, Mark Giordano has 38 points in 39 games but wasn’t selected to the Pacific Division squad.

“It’s not like I was really thinking too much about it. We’ve got a lot more things to worry about here than if I make an All-Star Game or not,” Muzzin said. “[Drew’s] deserving of it, he’s been an All-Star in this league since I’ve been here.”

–Lots more below from Desjardins, Doughty, Muzzin and Scherbak, the latter of whom will return to action tonight after he was scratched for the last four. Might this be the type of speed-and-skill-based match-up that could illuminate Scherbak’s skill set? “I don’t know – it could be two different games,” said Scherbak, who has never faced the Lightning in his career. “It could be a grind game, but it could be, like you said, a skill-and-fast game. I think it’s up to us what we’re going to dictate, what kind of game. I think if we’re going to be physical, take away space and time, then we’re going to have more time with the puck to make plays and stuff. But they’re a fast team, and I think it’s going to be good.”

“They’re good on the sheet – their record is good, and I think it’s a good challenge mentally, especially to get prepared for this game knowing there’s a good team on the other side coming in. I’m looking forward to it.”

Willie Desjardins, on the energy at the morning skate:
It was pretty good. I think when you’ve had a day off you’ve always got to wonder, but this team that’s coming in’s a fast team, so we better have good energy.

Desjardins, on how to “slow” Tampa Bay:
You’ve got to have it from everybody. They have too many good lines. You can’t get good match-ups all the time, so everybody’s going to have to be ready, and we’re going to have to be skating. The signs of good teams is they just kind of wear you down, because they come shift after shift. You might be able to handle one shift or two, but then they put together 18 or 19 in a row, and that’s when you get in trouble, so we’ve got to stay good.

Desjardins, on Anze Kopitar:
He’s been outstanding, too. When I look at players, like, he’s such an elite player. He’s a guy that makes lots of things happen for us. Lots of nights I’ll look at his minutes, and I’d love to have him at 21, 20 minutes a night, and he’s up to 24, 25, even sometimes higher, and that’s a lot for a big guy to carry. He’s just a guy that can play both ways. Both sides of the puck he’s strong and he’s a catalyst for sure for us.

Drew Doughty, on the relationships he’s built with players at All-Star games:
I don’t even know who got selected right now, to be honest. I’m trying to think – McDavid’s always there, so I’ll get to know him a little better. I like talking with him. Just playing with him is pretty sweet, too – when you get to play with him in the three-on-three, that’s pretty awesome playing with that guy. Who else is on my team that’s usually there? Johnny Gaudreau is usually there. He’s a good guy I like to talk to. There’s so many guys around the league – usually P.K.’s there. I’ve known P.K. for a long time, so I always talk to him. Guys like Stamkos, Tavares – if they made it, I don’t know. Hanging out with those guys – I grew up with them. I look forward to meeting everyone, really.

Doughty, on the Pacific Division having won the All-Star tournament twice:
We’re not going there thinking, ‘oh, let’s win this thing, let’s win this thing,’ but once we lace up the skates in the room before, we’re like, ‘we’re here, we might as well try to win this thing.’ Who doesn’t want that money? It doesn’t matter how much money it is. [Reporter: Get something to play for.] Yeah, and it’s a little bit of bragging rights, or whatever. Once we get there, once we put the pads on, we’ll be trying to win it. [Reporter: And I imagine once you get into that second game-] That’s the thing. You win the first one, then you’re really going to try harder the next one. But if you lose the first one, you might slack a little bit, you never know.

Doughty, on the respect players across the league have for Steven Stamkos:
Yeah, you know, I haven’t hung out with Stammer in a while, but I’ve known him a long time. He’s a great guy, has a great family. I’ve known them for a long time, too. He’s a captain in this league at a very young age for a reason. He’s a very good leader both on and off the ice. He’s a very good pro and a very good player, and like you said, everyone talks very highly of him a round the league because he’s such a good person and such a good guy.

Doughty, on accounting for a power play that includes both Stamkos and Nikita Kucherov:
You just know that they’re looking for each other all the time. You just trust your partner or your forward, whoever’s on the ice with you, just take the other guy. Just be aware that they’re always going back door, trying to go cross-ice, trying to find a quick seam to get a puck open. Just stay on your guy, don’t give him any space and you should be fine.

Jake Muzzin, on how Tampa Bay’s one-timer power play set-up differs from Washington’s:
They have Stamkos on the one side shooting one-timers and Kucherov on the other side. I think the best way to defend that is to not take penalties, really. When we do, or if we do, we’re going to have to do a job. We’re going to have to be smart on our sticks in blocking shots and trying to take away those threats, but the best way to do it is just to try to stay out of the box as much as we can.

Nikita Scherbak, on what he’ll look to demonstrate early alongside Adrian Kempe and Tyler Toffoli:
Just use speed to try to hold onto the puck as much as possible. Make plays in the O-zone, because they’re good defensively, but I think we have to take advantage. Their D, they have some good D, but also I think with our speed, we can definitely make some plays and spend a lot of time in the O-zone if we make the good breakouts and just be focused and play our game. 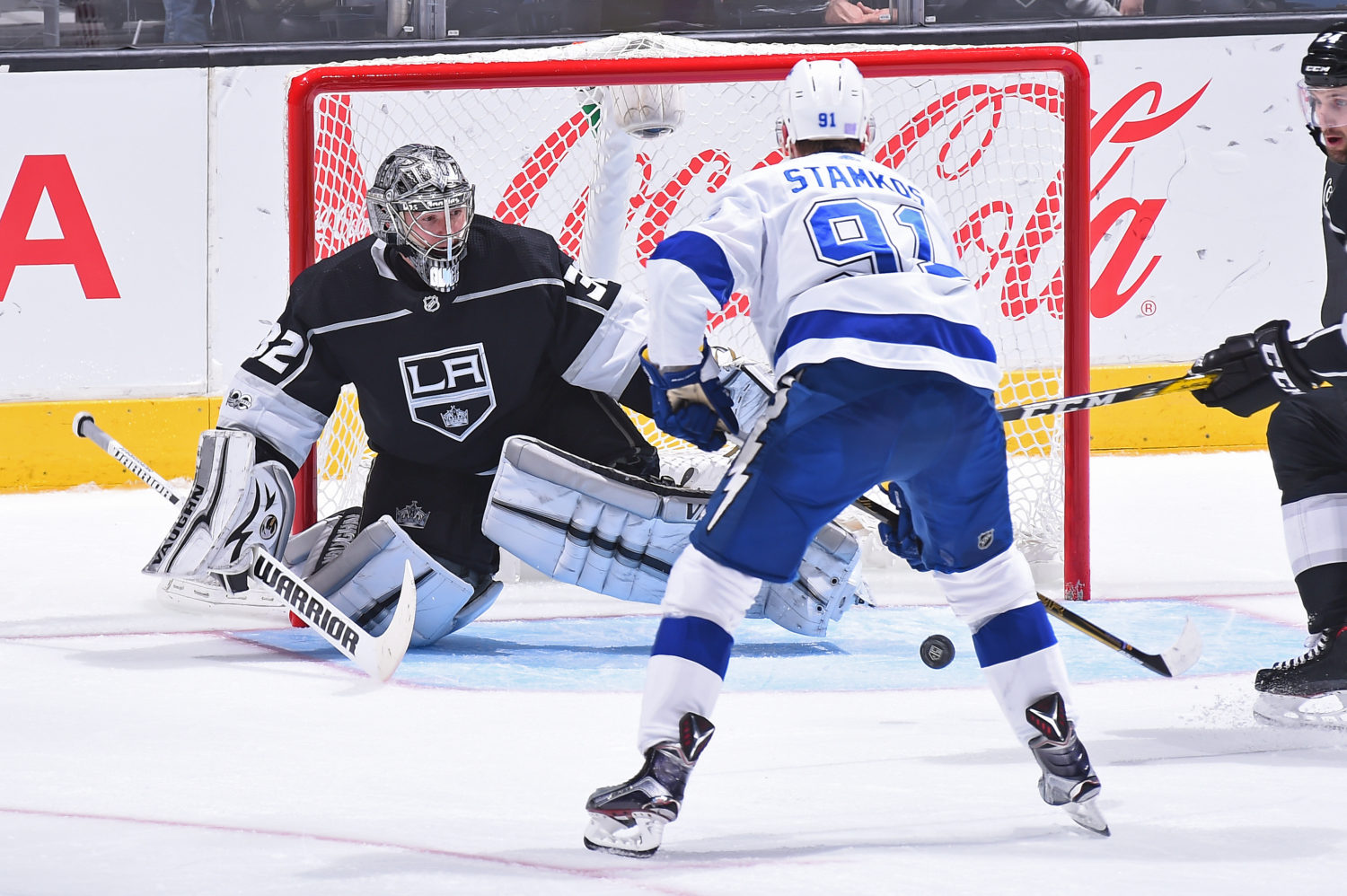