INSIDERS. A good afternoon to you on this bridge between Christmas and New Year’s. Enjoy your Thursday and the much more tolerable commute, if you’re headed to or from work today. The Kings were certainly ready to get back to work as the entire team congregated early and had clearly set their watches to Viking Standard Time when they started trickling onto the Toyota Sports Center ice at 9:37 for a 10:00 skate. They aligned thusly:

–The vitals: Jonathan Quick left the ice first and is expected to draw the start versus Arizona, against whom he is 18-18-4 in his career with a 2.54 goals-against average, a .904 save percentage and six shutouts. Jeff Carter is day-to-day with an upper-body injury and won’t play tonight, Willie Desjardins said. “I don’t know what happened for sure, but it wasn’t anything major, it wasn’t that he was doing anything, he just tweaked it a little bit, so he’s out for a bit. … I thought he would go today, but he’s not quite there.” Carter didn’t take the ice. Extras were Cal Petersen, Daniel Brickley, Nikita Scherbak and Dion Phaneuf, the latter of whom joined the team at the outset of the skate but is still a ways out. “He hasn’t had any contact yet, so until he has contact, you really can’t tell where he’s at. But it’s good to see him back on the ice,” Desjardins said. “Our medical staff’s done a great job. We have lots of guys that are real close to getting back that we expected would be out a little bit longer. The medical team’s done a good job, and it’s good to see those guys skating.” As foretold last week, Daniel Brickley, Sean Walker and Michael Amadio, who had been temporarily assigned to AHL-Ontario after the Vegas game, were quote-unquote recalled to the Kings in a paper transaction that allowed the club to bank salary cap space during the break. 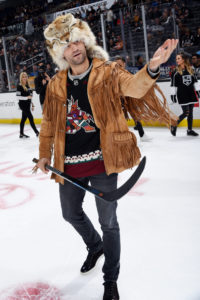 –Their vitals: Los Angeles alum Darcy Kuemper will start in net. He was known as a bit of a Kings killer during his Minnesota days and is 3-2-2 with a 2.43 goals-against average, a .922 save percentage and one shutout in eight career games against his former club. The Coyotes will be without Antti Raanta (IR / lower-body) Christian Dvorak (IR / upper-body), Michael Grabner (IR / eye), Jason Demers (IR / lower-body) and leading goal scorer Brad Richardson (flu), while Vinnie Hinostroza’s (IR / ankle) return is close, per Craig Morgan of The Athletic. Hinostroza participated in the morning skate. The Coyotes recalled goalie Adin Hill and forwards Connor Garland and Michael Bunting from AHL-Tucson; hill will back Kuemper up this evening. Arizona’s 19 road points rank fourth in the Western Conference; they’ve won six of their last games against Los Angeles and are 3-0-0 on the road against the Pacific Division this season.

–Carl Hagelin (MCL sprain) and Jonny Brodzinski (shoulder surgery) showed good improvement in their ability to get around the ice and shoot the puck when they both skated in full gear with Craig Johnson prior to the morning skate. There’s no timetable on their returns yet, but both have experienced improvement since graduating from skating in track suits.

–Desjardins confirmed that both Austin Wagner and Kyle Clifford would play after suffering head injuries in their last outings – Clifford on an unpenalized hit from Vegas’ Pierre-Edouard Bellemare on December 8 that questionably did not draw supplemental discipline, and Wagner on an illegal check to the head by San Jose’s Erik Karlsson on December 22 that resulted in a two-game suspension for the Sharks’ star.

As noted an alarming number of times, these types of injuries are nebulous and not always easy to diagnose. Wagner, for what it’s worth, said that he did not suffer an actual concussion. He still went through protocol after his second period hit on Saturday and did not play Sunday before returning to Calgary during the Christmas break and getting his work and checklist taken care of there. Wagner’s previous pro concussion came when he broke his nose in a fight with San Diego’s Steve Oleksy during a Reign-Gulls battle in April. He remembers quite a bit from getting his bell rung by Karlsson.

“He wasn’t intentionally aiming for my head or anything like that, he’s not that type of player,” Wagner said. “He just unfortunately connected with it, but I’m all good, and that’s all that matters.”

Clifford has a lengthier history with these types of injuries. Though he admitted to feeling fine after the game – “I was great the next day, no issues,” he said – there will always be caution and care when dealing with an important organizational figure who has sacrificed the well-being of his body to help his team win hockey games.

“I mean, they know my mentality. I just want to play. It’s unfortunate. These things happen. I feel great, so there’s no problem,” Clifford said. This is still an off-putting situation, as there’s no real one-size-fits-all road map towards diagnosing, treating and rehabilitating head injuries, and Clifford’s rugged defense of his teammates mean that he’s faced his share.

“It’s just protocol – these things, they’re an issue across all sports, so they’re trying to take care of players as best they can,” Clifford said. “Neuropsych said it was great, so it was more precautionary than anything,” Clifford said.

He remembers Bellemare’s hit but preferred to keep his own opinions internal. “That’s for NHL Player Safety,” he said. “Obviously they looked at it, and they made their decision. It’s fine, and I’m just moving on.”

Willie Desjardins, on Dustin Brown noting Alex Iafallo has become “a more consistent player”:
I’d agree with Brownie. The last probably 10 games, he’s raised his level where he’s just playing with more confidence. He’s more of a factor, he’s getting to the puck, he’s hanging on to it a little bit more, he seems to be shooting the puck better. He’s finding that high spot. I think he’s just finding the line a little bit better, too, of where to go. Before, I think he was just kind of a pressure guy. Like, he just pressured the puck and skated, but now he’s certainly adding more to the line.

Desjardins, on an early-game emphasis after the Christmas break:
We’ve got to get our legs under us. Whenever you’ve had a few days off, your tendency is maybe you’re not skating quite as well. We were skating well coming into the break, and we just have to make sure our legs are going, and then it’s a little bit of attention to detail. Your battle level’s got to be up, things like that, but that’ll be taken care of in the first five minutes, I would think. [Reporter: Is it something like as a coach that you try to get everybody on the ice as early as you can and try to keep four lines going as much as you can?] Yeah, I think early it’s good to get everybody in. They’ve had a little bit of a break, and will depend a little bit on power play and penalty killing – it always makes that difficult. But it’s good to get guys going and get their legs under them so everybody feels they’re part of it.

Desjardins, on whether this stretch is the best Ilya Kovalchuk has played since he arrived as coach:
I think it is. He had some good games before I was her that I didn’t see quite as much, and the thing he adds is his offense. That’s what makes him a special player. When you’re seeing him on the scoreboard and that, that’s a real good sign. He made a great play the other day that didn’t result in a goal, but he’s creating some good looks offensively, and that’s what we need from him.

Desjardins, on whether Kyle Clifford and Austin Wagner will play:
Yeah, both guys are ready.

Desjardins, on any set number of games Jack Campbell will play in Ontario:
No, I’m not quite sure. For us, it was just to get him down going, get some games, and then get him ready to come back up here, so I would think he’d be here fairly sooner.

Desjardins, on the team’s success over the last three games:
We talked about it. A lot of our games have been close in that specialty teams could’ve made a difference in lots of them, but we had five or six games if it goes the other way. Both the specialty teams are playing better right now. It’s great to see the power play going. That makes a difference for us, for sure. And then it’s just the little things. I think we’re going to the net a little bit better. I think our transition game’s a little bit better. In saying that, I think there are still areas we can get better at. I think it’s more just getting everybody on the same page. I think we’re finally starting to get that one.

Desjardins, on why the success occurred abruptly:
I think we’ve been playing quite a bit of good hockey. The one game in Calgary wasn’t good, the game in Columbus wasn’t good. The Calgary game we played the night before the Columbus game, we just didn’t play good. But outside of that, we’ve had a lot of games where we’ve been right there and we just haven’t capitalized on specialty teams. I think that’s the difference, because when you score, too, you get excited. But on top of that, we have a lot of young guys in the lineup that are just maybe learning the league a little bit better. Walker hasn’t played that much, Luff. I think we had three D that totaled less than 80 NHL games between the three of them. Like, that’s not a lot of games, and when you’re that young into your career, I think you can learn quicker, so maybe it’s just they’re learning skills a little bit quicker. You’ve got Luff and Wagner up front and Amadio, so we’ve had lots of guys that re being around a little bit more, I would think.

End of a good session for Brodzinski and Hagelin. Both in gear, stickhandling, shooting pucks, getting around pretty well. pic.twitter.com/UAviddIv4n