Over the course of the last 24 hours, you’d have seen just about everything you could imagine from a hockey game if you followed the back-to-back between Ontario and San Diego. After a wild game last night, the two teams squared off again this afternoon, resulting in a 7-6 shootout victory for the Reign.

Forward Philippe Maillet netted a hat trick, his second in his last four home games, and defenseman Kale Clague collected a career-high four assists in the victory. Goaltender Jack Campbell, returning to Ontario on a conditioning stint from the Kings, saw 21 shots in the first period, stopping 20 of them, as he finished with 40 saves in total in the victory, in addition to three in the shootout.

Unlike yesterday evening, when Ontario was unable to capitalize on the five-minute PP, the Reign struck twice tonight, though they also conceded once, as they took a two-goal lead in the third period. The Gulls would come back to tie the game at six late, before the Reign survived a late penalty in overtime, before winning in the shootout, with Sheldon Rempal tallying the lone goal in the skills competition.

Ontario is off for the next four days for their holiday break, before returning to action on December 28 in Texas, with a matchup against the San Antonio Rampage.

Mike Stothers on his team’s bounce back effort
Well it was terrific. From a fan standpoint, it was about as entertaining as you can get. Goals scored left, right and center, there were a lot of altercations and physicality to the game. Then you go into overtime and there’s a power play in overtime then you finally decide the game in a shootout. I guess we sent everybody home happy for the holidays and probably excited for our next home game.

On seeing just about everything you can imagine in a hockey game in the last 24 hours and the rivalry with San Diego
Well I don’t know, it’s been an ongoing thing against San Diego since we came out this way, so it’s just kind of built its own little legend of entertaining hockey. Both teams played hard and, for the most part, both teams played fair and clean. Every once in a while, you feel that somebody’s crossed the line but they probably feel the same way about us. You’ve got to respect the fact that they play hard and they want to win just as bad as we do.

On Jack Campbell’s play, keeping the team in the game early
He had 21 shots by the end of the first period and by the end of the second he had 33 – that’s a full game right there in two periods. He was supposed to come down for a game of conditioning, he already had the game in two periods. The whole idea of having him come down was to get him into game shape, and he did that in one period. So I guess the plan is for Soupy to play in two games with us and get his conditioning back and he’s good to go after one. We showed him enough rubber tonight that he’s good to go, he’s seen everything that he can possibly see. Soupy, he’s such a competitor and he’s so well liked by the guys, that it’s just fun having him back in the room and having him in our lineup. Whether it’s for one game or two games or whatever it is, he’s come a long way. It hasn’t been easy for him, and he’s never lost his personality or his sense of humor and he’s pretty entertaining and he’s a pretty good puck handler, as you saw with that toe drag in overtime.

Kale Clague on the strong effort after an emotional loss last night in San Diego
Last night was an emotional game, there were a lot of fights, guys were crashing and banging. [The Gulls] play really hard at their rink and I think we did a good job tonight. We came out hard and we finished more checks than we did last night. Obviously it wasn’t that clean of a win, but it’s good to get back in the win column.

On the power play striking twice on the five-minute advantage
That was huge. Our power play has been struggling a little bit as of late and to get a few goals, to get one on the 5-on-3 power play and we even got a 5-on-4 goal, it obviously gives our power play a lot of confidence and, at that point in the game, we should have locked it down from there, but stuff happens throughout the game and it was good to find a win.

On the character of the Reign, being able to bounce back with a strong effort
It’s such a quick turnaround, a three o’clock game, after an emotional game like last night, it was good that we could turn the page, put it behind us and come here ready to play, refreshed and it’s great to win going into the Christmas break. 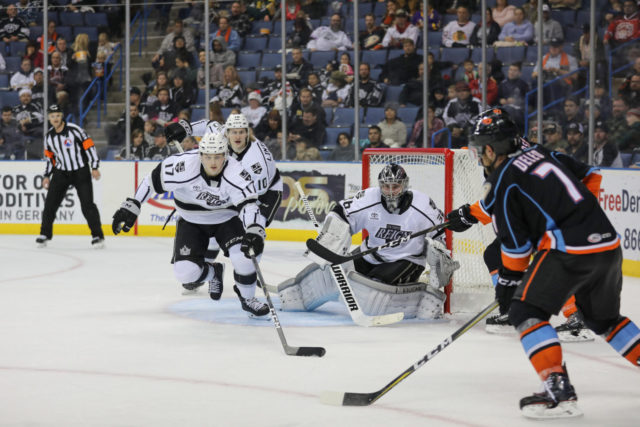 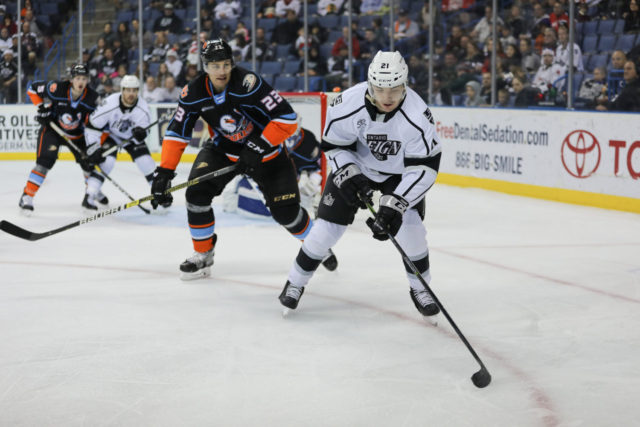