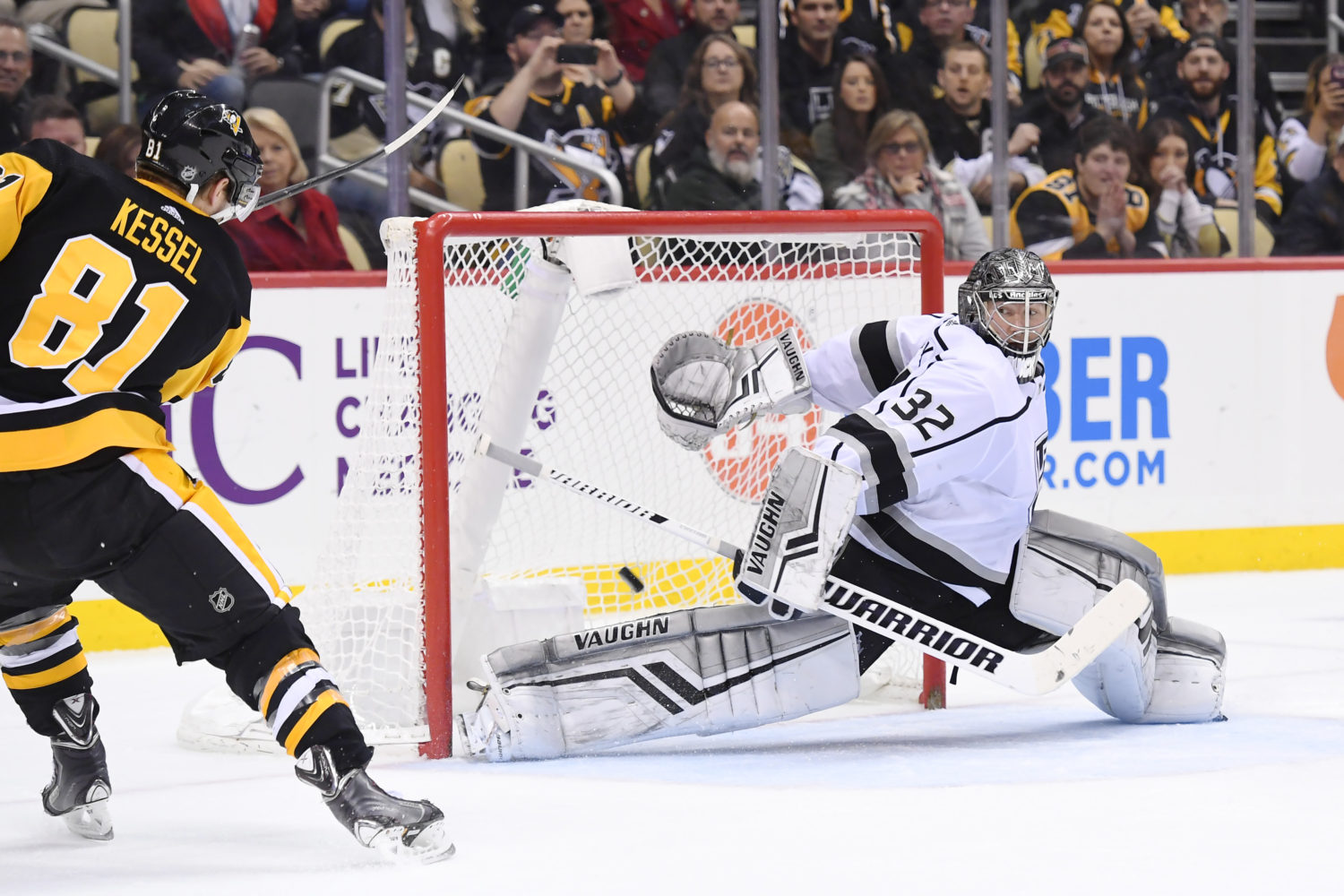 Willie Desjardins, on coming back to earn a point and what enabled the team to come back:
Well, it was good to get one on the power play. I just think the guys, they want to win, they have drive. Every guy here is upset when we lose and that’s the way you play. I believe in the leaders on this team, I think that they want to win and we didn’t get it tonight, but I thought they battled hard.

Desjardins, on younger players playing well tonight:
The young guys are a big part of where the organization’s got to go. I thought the Amadio line was outstanding tonight, they had a great game. I thought Walker played well and Brickley came in and he was good too, I thought overall our young guys played hard.

Desjardins, on the level of frustration building in the room:
They’ll refocus again for the next game, it’s way better when they’re upset than if they’re in there feeling like everything’s great. They got a point, it’s good to see them upset.

Jonathan Quick, on the team battling back:
We lost. [expletive] effort’s not enough, you know? That’s a given, effort should be there every [expletive] night. We lost, so that’s how it works.

Quick, on if there are any positives to take from tonight’s game:
We got one. One point’s better than zero.

Quick, on whether this is the most frustrating stretch he’s had over a sustained period of time:
It’s a one day at a time job. We lost today, that sucks. Wake up tomorrow and now we’re working on winning the next game, that’s all it is. It doesn’t matter if we won the last ten or lost the last ten, it doesn’t matter. It’s a one day at a time job. It sucks today, losing, tomorrow we’ll wake up and get ready to try and win the next one.

Jake Muzzin, on the frustration level seeming to be at an all-time high:
Yeah…you know it’s frustrating, but what’s key, I think, it’s how you generate your frustration. Do you yell at guys or yell at each other or shutdown or what have you, how do you generate something positive out of being frustrated is important for us now. We have to stick together as a team, that’s first and foremost and everyone grab a shovel and start digging. I think if we start pointing fingers, the team crumbles. I believe in this team. Obviously we have a lot of guys hurt, but we can’t be making excuses, we have to come together as a team and get out of this together.

Muzzin, on if tonight feels like a chance that slipped away after coming back from down 3-1:
We played hard. There were some checking errors and they’ve got good guys, if you make mistakes when you don’t check properly, they capitalize. That’s what happens. We had some chances in overtime to capitalize and we didn’t. We ended up taking a penalty and they get a power-play goal at the end. If we…I don’t know we’ve got to correct those checking mistakes. The first goal shouldn’t happen. The second goal shouldn’t happen. We have guys in position and we don’t check properly and they score. When we’re not good checking and we’re sitting back and defending, we allow teams to generate offensive chances and they score goals.

Muzzin, on his personal approach moving forward:
My approach going forward is to keep working, I mean, what else do we have? You keep working and try to get better every day. Try to help the young guys get better, keep pushing each other, the older guys, keep pushing each other to get better. I mean, there’s a lot that goes into it, it’s been frustrating, it’s been a test this year, for sure, but me personally, I’ve learned a lot. I’ll just continue working hard and try to make guys better.

Muzzin, on the progression of the younger players on the team
Yeah, we just need it on a consistent basis. Flashes with the puck are okay, but the checking errors are what is killing us. To check hard and check properly in this league – and when I say check, I’m talking about winning battles, being on the right side of pucks, being on the right side of guys, being over the top with speed – stuff like that, that’s tough to learn. When to pinch, when not to pinch, these are all situations that are tough. We keep hammering away and try to get better.

Alex Iafallo, on the team battling back from two goals down to force overtime:
It’s a tough one, you want to win those games. Looking at the positives and negatives, you know we did battle back, had good chances and a good battle back from all of us. On the negative, we wanted that win, you just have to finish some chances. We have to help out Quickie there, we should’ve gotten the win there.

Iafallo, on whether it’s more difficult to see those positives when you get to this point:
It is, yeah. Sometimes, you have to learn from your mistakes, but at the same time, you have to go out the next shift and keep battling, staying positive. You just dig yourself into a hole if you just keep thinking about the negatives. We just have to come together as a team and win those games.

–Alex Iafallo collected an assist for the fourth straight game, as a part of a two-point evening. The four-game scoring streak sets a personal season-long streak for the second-year forward.

–Defenseman Jake Muzzin collected a goal and an assist in the overtime loss. Tonight’s game marked the second time in his last three games played that Muzzin has collected multiple points.

-Forward Matt Luff scored in the second period, his third goal over his last five games played and his seventh goal of the season.

The Kings will travel back to Southern California following tonight’s game and the team has a scheduled off day tomorrow.