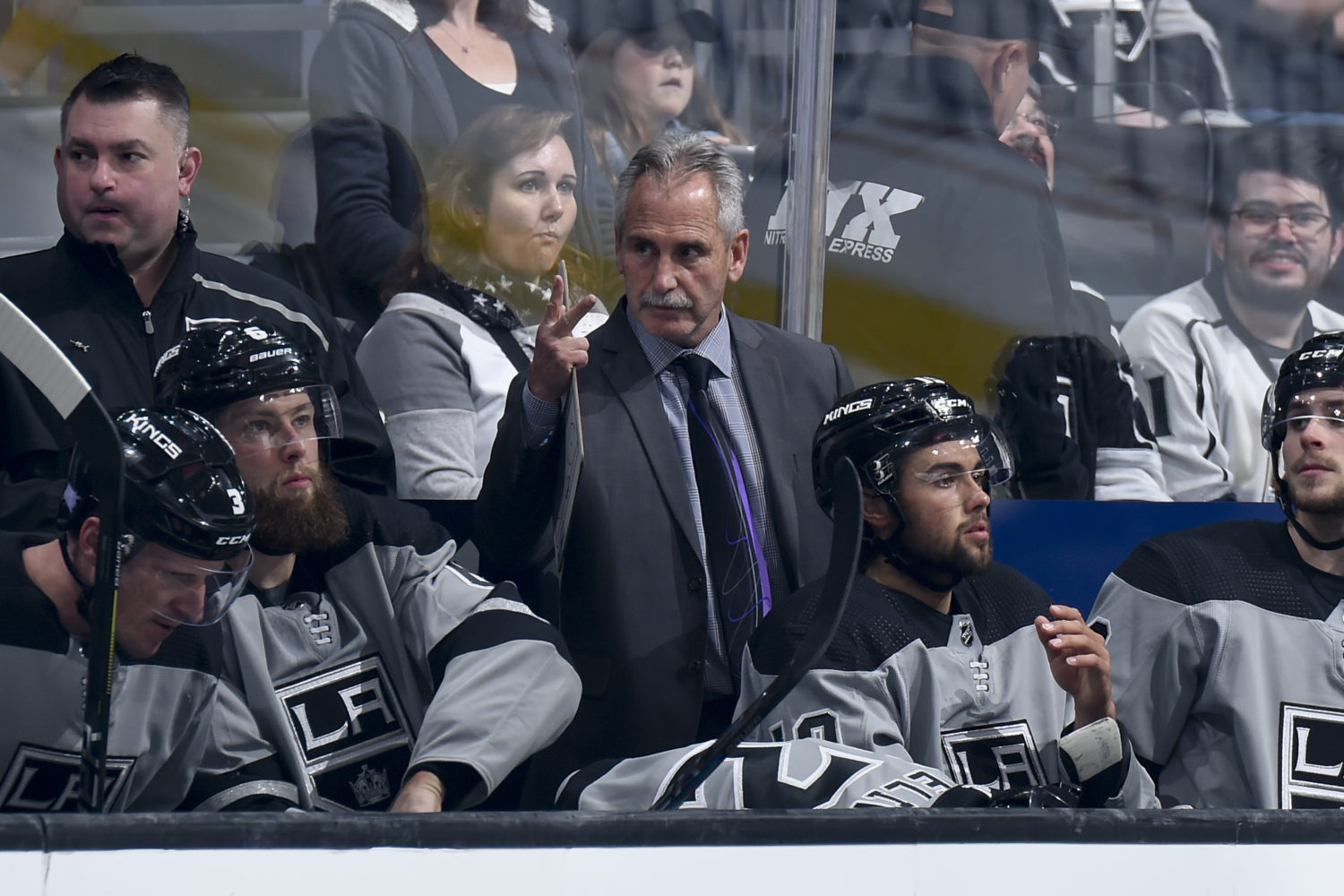 Good afternoon Insiders, or early evening for those on the East Coast.

The Kings skated in their lone full-team practice of the week here in Pittsburgh. The skate began with 15-20 minutes of power-play work, followed by some more up-tempo stuff during the rest of the skate.

In limited line rushes, line combinations today also appeared to be the same – Kopitar, Iafallo, Brown, Kempe, Toffoli and Scherbak skated in purple, while Carter, Leipsic, Luff, Amadio, Wagner and Thompson skated in yellow. All the defensemen and goaltenders were in black.

On the blueline, the same pairings as yesterday seemed to begin the drills – Fantenberg-Doughty, Muzzin-LaDue, Forbort-Walker – but see note below regarding Brickley and we should get a better sense of how those pairings shake out at tomorrow’s morning skate

Quick Hitters –
– Reports from El Segundo indicate that goaltender Jack Campbell skated yesterday at Toyota Sports Center. Campbell was placed on injured reserve approximately one month ago, keeping his return in line with the original 4-6 week recovery timeline.
– Daniel Brickley could make his season debut tomorrow with the Kings – “We’re going to try and get him in” Desjardins said after today’s practice. Brickley previously made his NHL debut last season and has spent all of this season to date in the AHL with Ontario.
– Additionally, Desjardins deemed Dion Phaneuf as “week-to-week”. He noted that he knows Phaneuf is sore and that he doesn’t see him back in the next 3-4 days, thus the justification.
– World Juniors Update – All four Kings prospects with Team Canada survived the first round of cuts. Team Canada still has to trim its roster by eight heading into the tournament. Original reports indicated that a final roster would be established today or tomorrow.
– On the Ontario Reign side – The Reign added a pair of blueliners today to fill the voids created with Brickley and Sean Walker moving up to the NHL. Austin Strand has been reassigned to Ontario from Manchester, while the Reign have inked Craig Wyszomirski to a PTO. Strand collected an assist from his only game with the Reign so far this season, while Wyszomirski has appeared in 10 career AHL games with Ontario and Syracuse.

Team 🇨🇦 still has to release one goaltender, three defencemen and four forwards.

Tyler Toffoli on getting chances and not being able to finish as of late
I’m happy with where my game is at. Obviously, I’ve got to put them in the net, but when you keep getting the chances that I’m getting, you’ve got to stay positive and keep working.

On his line with Kempe and Scherbak
I’ve played with Juice all of last year pretty much, so we know where we’re at. We’re all working and talking on the ice, which makes things easier. When we’re doing those things, you can see some shifts where we’re pretty dominant, so we just have to do that on a more consistent basis.

On his power-play unit and they’re performance last night
I think even in Buffalo we had some good puck movement as well and it’s just those things where you keep going, you keep moving your feet and getting open for each other. Obviously, when you’re a man up, you’re going to have a lot of extra room out there, so it’s the same thing, it’s just kind of communication and letting each other know where they’re at. When you get those open looks, you got to shoot the puck and score.

Willie Desjardins on “stopping the bleeding” and whether there’s a specific area to start
We’ve played lots of pretty good hockey coming into that, so I think it’s one game, I’ve got to take it as just one game. If it’s more games, then I have to react differently. Maybe the Buffalo game took a lot out of us, maybe our D were tired, maybe Kopi was a bit tired. There’s lots of things and if I looked at that game, we’ve got to be better 1-on-1. We just weren’t good enough 1-on-1. We didn’t do a good enough job in our own zone. Most games, we have a pretty good push back, if things go wrong, we still battle pretty hard. I’d say, out of the last 10-12 games, I think of maybe two games that I didn’t think we battled back the way we wanted and last night was one of them. Right now, it just wasn’t good enough, that was a bad effort, and write it off to that and we’ve got to move onto the next one.

On the direction of today’s practice
We tried to look at what we didn’t do right and try to find a way to get better at that. Most of it the guys know, it’s not like there’s something they don’t know, it’s just putting it in their minds and trying to get the right habits back again. You can see that today, there’s guys that were tired today so we can’t go too hard because we’ve got to have energy tomorrow.

On improving the power play, while keeping the personnel the same
Well one, we’ve got to draw more power plays, last night was one of the few times we’ve had a few power plays. The guys talked last night, the one unit was pretty good, the Kempe unit was pretty good, the other unit wasn’t as good. We’ve got to get hungry on it. Like I’ve always said, I believe we’re going to score, I do, but there has to be a point where we do score. We have to get more urgency in it for sure and I think today probably gave us a good idea of what we want to do and we just have to go out and execute.

On the players helping one another to stay upbeat and passionate during losing runs
Losing’s tough, it’s hard when you lose, but I think winning’s contagious and I think attitude’s contagious. I think there’s a few guys in the room and Drew is one guy that’s been unbelievable this year. He really has been exceptional on how he’s approached the game and the energy he brings every night, it’s truly amazing. He can’t do it all by himself, every night, so what we talk about is him recruiting a couple guys to help him out, get a couple other guys that are doing it so now you’ve got three guys doing it. And those guys maybe grab another guy each and all of a sudden, you’ve got five. Once you’ve got five, the flow kind of goes the other way a little bit. It’s kind of recruiting guys that will take it a little bit as their job to make sure they’re ready and every guy’s responsible for being ready themselves, nobody should have to get you ready, that’s your job. Individually, we have to do a better job and vocally we have to get a few more guys to that point.

On whether Drew Doughty has been his go-to guy to get through to the players
A bit, but I feel there’s lots of guys. I think Quick is that guy, Quick has an amazing drive to him, he is good, really good that way. Kopitar is the same, Kopi’s just a little bit more of a quieter leader, but boy he plays hard on the ice. Brownie’s good, Muzz has had some really good games, so we have had a really good group with that. I think it’s too much for Drew to have to do it all, he’s got to play. He can’t be worried about doing that all the time, so we need it to come from a group. I think there’s been a pretty good focus from the group itself. They know what they want to do and we do have a lot of new guys in the lineup, and we’ve got to find ways to get them up and running quicker. I thought the Kopitar line was pretty good last night, but it’s tough. It seems either I play them too much and we stay in the game, or I get them to the end of the game and they’re too tied to go. Somewhere, you have to have a fine line a little bit, but they’re a good group.