By Zach Dooley For LAKingsInsider.comDecember 12, 20180 CommentsUncategorized

Another short flight last evening after last night’s game and the Kings have arrived in their third city in three nights – Columbus, Ohio.

I still have visions of the old Columbus logo, the mark they had when they started as an NHL franchise. I like their current mark as well but was always drawn to the old mark, used from 2000 – 2007. 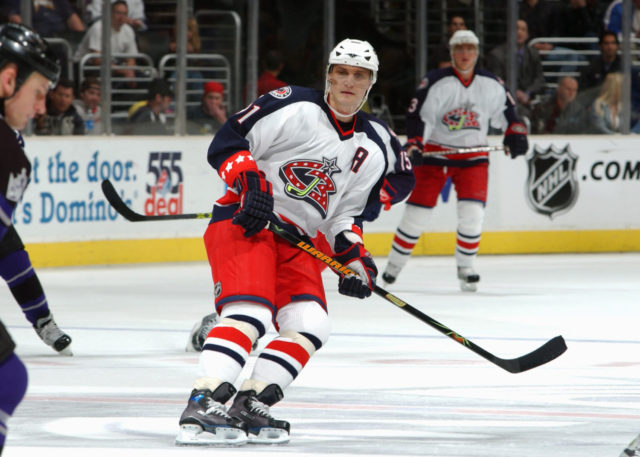 I think this logo being in my head stems back to playing NHL Hitz 2002. Back in the early years of the Blue Jackets franchise, still coming off of being an expansion team with the old expansion rules, the Blue Jackets were towards the bottom of the league in their first several years and were always one the first teams you’d play in franchise mode as you tried to work your way up the ladder with your created team.

For those that never played NHL Hitz, it was an arcade-style hockey game, similar to NBA Jamz that you’d see in every roller-rink arcade. I spent a lot of hours as a kid playing NHL Hitz. When an individual player had a hat trick, they’d go “on-fire” and then there was the ever elusive “blue fire” when you’d score three one-timer goals in a row and your whole team would go on blue fire, which was almost unstoppable.

I remember if you waited long enough through the credits, the fans would hold up signs in the crowd that would give you cheat codes and unlockables. So if you paid attention, you could put in for unlimited turbo or playing with a roller hockey ball instead of a puck. Then, later, we realized we could just look up all of this information on the internet and that made the game significantly easier.

So with that, welcome to Columbus. Waking Up With The Kings coming later today and the team will have an optional skate at 2 PM local time. Talk soon, Insiders.