By Zach Dooley For LAKingsInsider.comDecember 11, 20180 CommentsUncategorized

While the Kings are on the road for the second of four games this week against foes from the Eastern Conference, tonight marks a home game of sorts for forward Alex Iafallo.

Iafallo, a native of Eden, NY, grew up approximately a half hour from Buffalo, “depending on snow” he joked.

The second-year winger noted that there are approximately two buses full of family and friends coming to tonight’s game, making the trip from his father Tom’s bar, the Towne House, located in Hamburg, NY.

LA Kings at Buffalo, Tuesday December 11…ride the bus to the game from the Towne House…$20, 2 buses leaves at @5:30 & 5:45 roast beef and wings before the game
LA PR will be following us, so look good! Getting together for a photo after the 2nd period by the sabres store

“We have a couple of buses coming from my dad’s bar so it’ll be a good time,” Iafallo said earlier today. “We’ve got to get a win here but I’ll definitely enjoy it on the ice.”

For Iafallo’s parents, tonight will be the first time watching their son play in Buffalo. During the Kings’ lone trip last season, his parents were at Ohio State, watching Alex’s sister Julianna play in her senior weekend with the Buckeyes.

The Iafallo siblings, for one day, will play in the same town. Julianna is now a member of the NWHL’s Buffalo Beauts, who practiced this morning at the HarborCenter, where the team plays its home games. The younger Iafallo has collected three goals and four points from seven games this season with the Beauts. 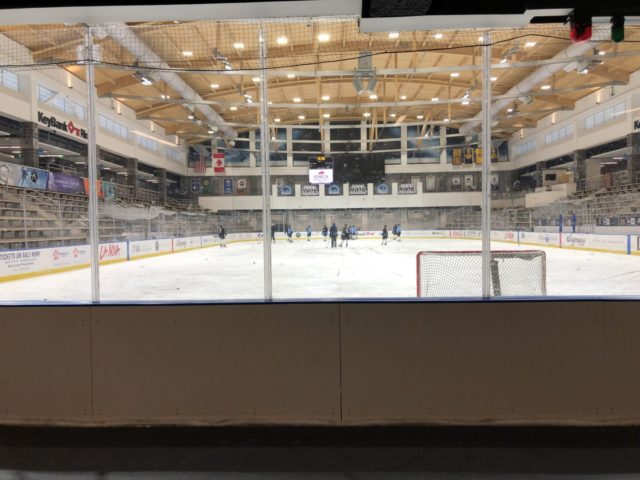 Iafallo noted that he’s proud of his sister for reaching the NWHL and expressed his own excitement for his sister also playing at the professional level. He mentioned that he was able to see Julianna this morning for a bit and that she will be at the game tonight with his family.

“Yeah it’s pretty special,” he said. “Watching games with parents and my sister when I was a kid, it’ll be special to see them in the stands. To see all of my friends and family, it’ll be nice.”

Had things shaken out differently, could tonight’s game could have seen Iafallo on the other side of the ice? The 6-0 forward attended development camp in the summer of 2013, prior to his freshman year at Minnesota Duluth. Also on that Buffalo roster was goaltender Cal Petersen, Iafallo’s now teammate with Los Angeles, who was a fifth-round selection of the Sabres in 2013, before he chose to sign with the Kings in the summer of 2017.

While, for the Kings, tonight on the ice is just another game in which the team is in need of a victory, for Iafallo, playing at home against the team he grew up watching, is still a bit more than just another game on the schedule.

Kings and Sabres coming up at 7 – See the live blog from Jesse coming soon.