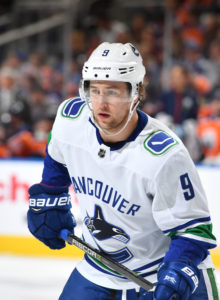 Los Angeles has claimed 24-year-old left wing Brendan Leipsic off waivers from the Vancouver Canucks, as first reported by Sportsnet’s Elliotte Friedman. As the league’s 31st place team, Los Angeles has the first selection off the waiver wire and has used it to add Leipsic and former Montreal winger Nikita Scherbak over the past two days.

More will come later today, but Leipsic is a smaller but feisty and sandpaper-type winger with a pretty good helping of speed and skill that allowed him to claim the 2013 CHL Top Scorer Award with 120 points for a Portland Winterhawks team that lost in the Memorial Cup final to Nathan MacKinnon, Jonathan Drouin and Halifax. This season, he has two goals, five points and a minus-10 rating in 17 games with Vancouver, where he received an average of two minutes and 16 seconds of power play time per game amidst an average of 12:50 per game across all situations. The Canucks did not have a roster spot for Leipsic with Jay Beagle ready to return and in advance of acquiring the Maple Leafs’ Josh Leivo in a Monday trade.

The competitive 5-foot-10, 179-pound forward who was close with Teemu Selanne’s while growing up in Winnipeg has eight goals, 31 points and a minus-15 rating in 81 career NHL games. Los Angeles was not the only team to put in a claim on Leipsic.

Leipsic, who was selected in the third round by Nashville in 2012, will join his fifth organization. Included in a Leafs/Predators 2015 swap that included former Los Angeles draft pick Olli Jokinen, Leipsic was claimed by Vegas in the 2017 Expansion Draft and traded to Vancouver for Philip Holm shortly before last season’s deadline. He scored a third period go-ahead goal for the Golden Knights in an eventual 3-2 overtime win at Staples Center last season:

Cool moment: Winnipegger Brendan Leipsic, who wears #13 in honor of Teemu Selanne's Jets tenure (stick tap, @garylawless), just walked off the elevator, and waiting in the family area with an enormous smile and a bear hug was Teemu.

From Ben Kuzma of The Province:

Brendan Leipsic could have added some sizzle to the Super Skills show Sunday at Rogers Arena.

He has a quick stride and could have pushed Jake Virtanen in the fastest-lap competition. He could have been a force in the team-oriented puck-control relay.

However, the Vancouver Canucks’ left winger, who has seen first-line and second-unit power-play time, was placed on waivers Sunday. If he clears Monday, he could add something to the Utica Comets that was missing at this level.

Leipsic has but two goals in 17 games, a minus-10 rating and had to earn the trust of coach Travis Green. The 24-year-old Leipsic, who’s on an expiring contract, could have little clout in arbitration if he doesn’t get back to the NHL.

“He has played some good games and some where he has just been OK,” Canucks general manager Jim Benning said Sunday. “He needs to be put into offensive situations, but if he’s not playing in a certain part of your lineup, he’s not going to get those looks.”

Los Angeles is looking to bolster its depth and add additional young, low-risk, no-cost options to its roster. Leipsic, on an NHL-minimum $650,000 contract, is eligible to become a restricted free agent after the season. More on Leipsic and Scherbak to come later today.