–Ilya Kovalchuk is dealing with an ankle injury and is not expected to play tonight, per Willie Desjardins. He was described as day-to-day by a team representative. The way Desjardins shared it, it didn’t sound to be overly serious. This hasn’t been the easiest month for the Los Angeles’ major free agent acquisition, whose last points came in Desjardins’ first game behind the Kings’ bench. Kovalchuk played 14:11 Thursday night, was on the first power play unit and received regular third period shifts through the final minute of the game.

–Desjardins said that “Drew Doughty’s been excellent” and “really stepped up his leadership” both on the ice and in the dressing room. He cited Doughty sticking up for Alex Iafallo after the sophomore forward’s delay of game penalty that led to Edmonton’s late game-winning power play goal. As shared this morning in Waking up with the Kings, there was an impassioned Doughty defense of Iafallo after the game.

–Dion Phaneuf will be honored for playing in his 1,000th NHL game during a TV timeout tonight. The Edmonton native was also honored during a stoppage at last night’s game and drew (mostly) respectful applause from an Oilers crowd very cognizant of his stature within the rival Flames organization.

In recognition of Dion Phaneuf playing in 1000 @NHL games, Ken King and Brad Treliving presented him with this painting this afternoon! pic.twitter.com/3GCgkfIMld

–In other Los Angeles-Alberta crossover news, Kris Versteeg joined Calgary’s Sportsnet crew and will be a part of a panel analyzing tonight’s game.

–With Kovalchuk not likely to play tonight, that will probably keep Sheldon Rempal in the lineup after there was some scuttlebutt last night that he might be the odd-man out a day after he appeared in just 6:20 of Los Angeles’ 3-2 loss at Edmonton. He did, in the Vancouver game, make a power move to the net to draw a holding call on Alex Biega.

With Austin Wagner, Rempal is one of two Calgarians on the active roster of a team that has quite a few local ties. There’s Dave Lowry, a Calgary native who played for the Flames and served as an assistant coach under Brent Sutter and and coached the Hitmen, as well as highly touted prospect Jaret Anderson-Dolan.

Of the group, Rempal is the only one who grew up a big Flames fan.

“There are a lot of memories growing up and going to the Saddledome,” he said. “One was watching Ryan Getzlaf when he was with the Hitmen playing the Brandon Wheat Kings, and when they had that good run there – I was actually talking to Brett Sutter about this the other day, for some reason it came up in my mind – I remember I was at his first game [with the Flames], and he ended up scoring that night. For some reason, that’s always stuck out at me. So, that was pretty cool. We had a good chat about that. Other than that, there are a lot of memories that I have there, pretty special ones.”

He’ll have over 20 friends and family at the game, while Austin Wagner, who played in the Western Hockey League and regularly returned to the Saddledome as a member of the Regina Pats, should have around a dozen friends and family members in attendance.

“It was always fun to play at home, obviously. A lot of friends and family, but I think it’s going to be a bit different for a Flames game where it’s sold out and a bit louder and a lot more people. It’ll be a good experience.”

He didn’t grow up a Flames fan, but he was – obviously – a fan of Jarome Iginla. “I think every kid in Calgary was growing up,” he said.

–More from Wagner and Rempal: 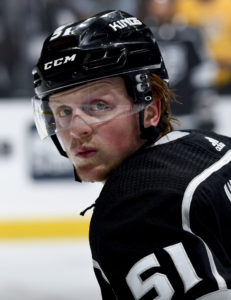 Austin Wagner, on whether he’s been thinking about this game for a long time:
I guess it’s cool to be home, but at the same time, I was just trying to stay up at the beginning of the year. I don’t think I was looking this far ahead. When you got on this road trip, I think at that point, it was like, ‘OK, well, it looks like I have a shot at playing at my hometown.’ I’m excited and I’ve got to be ready to go tonight.

Wagner, on whether it was special to play an NHL game in Edmonton:
Yeah, a little bit. I played some games there in junior, obviously. It sucks that it was a Thursday because family couldn’t come, but it was still a fun game to be a part of, and it’s always fun to play in an atmosphere like Edmonton where they have great fan support there. It was awesome.

Wagner, on growing up going to games in the Saddledome:
I think it’s just your childhood rink. You go there as a kid, and it’s your dream rink and it’s the only thing you know, right? When you come back to it, it’s always special because you grew up there, basically, you could say. You go to places like Vancouver and Toronto, stuff like that, it’s still cool because you see ‘em on TV, but I think it’s extra special to be at home and play in a building you’ve watched a lot of hockey in. 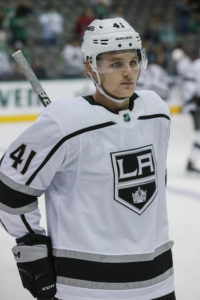 Sheldon Rempal, on returning to play an NHL game in the city he grew up in:
It’s unbelievable. It’s a cliché when guys say they come back to their hometown and play an NHL game, but for me, the path I’ve had, it’s truly an unbelievable feeling. Just to see all the friends and family in the stands tonight, it’ll be a moment I’ll remember for the rest of my life. I can’t wait to get out there.

Rempal, on whether he was drawing attention from major junior teams as a teenager:
I think with my case, I was always a late bloomer. I did get an invite to one WHL camp, the Moose Jaw Warriors, and I went when I think I was 15 years old, but that was kind of just getting experience. I don’t think I was ever in the consideration of making the team. Then I started playing junior when I was 18 and obviously got a scholarship, and it took a little longer to get to school than it was supposed to take, and then I was able to find my game in junior and then translate that to college. It’s not the most ideal situation. I think everybody wants to come in at 18 and get drafted and make the team right away. With me, it took a little longer, but I had so much fun during the path, and I’m glad with the way it happened.

Rempal, on any local coaches that had an effect on him:
I think all my coaches had an effect on me. I was playing midget AAA hockey and I was doing really well at the start of the year, and that was obviously my last year to get offers from junior teams that I would want to go to, and I just remembered that my coach was pretty mad at me, and he sat me I think for three games straight and kind of took me out of everything just to improve my attitude. I know I’ll always remember that in midget AAA hockey and I think it’s helped me out to this day. [Reporter: What was his name?] Adam Redmond.

Rempal, on the Calgary connection on Los Angeles:
It’s kind of funny – all the Calgary guys, they grew up in different quadrants, so I never really met them until I got to LA. But just hanging out with them, all the Calgary guys seem to be good guys – no bias or anything. It’s been good to get to know all those guys.