It’s in the books – 524 days after he was selected in the 2017 NHL Entry Draft, Gabe Vilardi has made his professional debut, coming in this morning’s Ontario Reign victory in Bakersfield.

Vilardi’s unconventional path crossed today with an unconventional game – The Reign and Condors squared off in a 10:30 a.m. game at Rabobank Arena in front of more than 8,000 fans, most of which were screaming students on Field Trip Day.

“I didn’t really have too much time to think about it,” Vilardi said after the game, noting the obscure start time.

The game marked another step for Vilardi, who tallied two shots on goal in the game, on his road back from injury. The Kings’ prospect has suffered setbacks in each of the last two seasons, forcing him to miss the beginning of both campaigns as he rehabbed. So to get into game action for the first time today marked a positive step in his progression back.

“It was definitely a long time coming,” he said. “I’ve been working hard from the summer, a lot of rehab, it’s definitely a relief.”

The relief as Vilardi put it came off as excitement in the words of Ontario Head Coach Mike Stothers.

“The enthusiasm for the game is infectious, with Gabe,” Stothers said. “He was so excited I thought we were going to take a too many men on the ice penalty.”

For his part on the ice, Vilardi skated in more than 15 minutes during the game, playing on the right wing of a line that also featured Philippe Maillet on the left and Zack Mitchell at center. The trio, along with defensemen Alex Lintuniemi and Kale Clague, also made up a power-play unit. Throughout the contest, it seemed that Vilardi’s minutes were a bit more limited in the first, helping to ease his way into the professional game.

“I talked to him yesterday and I said that’s probably going to be the biggest challenge for him, is managing his minutes and make sure that he’s not overextending his shifts,” Stothers said. “I mean, he’s been off for a long time, so you can see it in practice this week, it doesn’t take long to fatigue when you’re in more of a hockey environment. He’s skated, but it’s different being held up and trying to finish checks. I thought we tried to be a little bit careful and cognizant of that and also knowing that we’ve got another game tomorrow. Certainly, we don’t want to put too much stress on his first game back and I thought he did well.”

In his own words, Vilardi said he felt more comfortable in the latter 40 minutes of the game after getting himself adjusted during the first, a trend that seemed to percolate throughout the entire Ontario team, which did all of its scoring in the final two periods.

“Yeah, definitely more comfortable, it felt like I had more time with the puck than I realized I did,” Vilardi said. “In the first period, you’re kind of overthinking everything and as the game goes on, you start to just loosen up and feel comfortable.”

The 6-3 forward did have one big chance in the first period, as he picked off an errant Bakersfield clearance in the slot, but his shot was shouldered aside by veteran goaltender Al Montoya of the Condors.

In the third period, Vilardi took a Mitchell feed in for a breakaway, but his forehand-to-backhand effort was also stopped by Montoya. The rookie forward did put the puck into the net once, early in the final 20 minutes, but the play was immediately ruled off for goaltender interference, as defenseman Daniel Brickley was assessed a minor penalty.

“I thought, for his first game, with as long as he’s been off, he certainly shows a real hockey sense,” Stothers assessed of Vilardi’s debut. “He’s got an awareness of where he should be, what he should be doing, sorting things out, whether it’s a neutral zone forecheck or defensive zone coverage. I think that’s really encouraging, that there’s a good hockey mind there to go along with the talent that he has.”

Stothers went on to joke that we’ll see how he handles the “charter to Stockton” as the Reign take on the Heat tomorrow evening at Stockton Arena.

For Vilardi, the answer today was the same as it was yesterday and what it likely would be if he was asked again tomorrow – It’s just a matter of playing.

“I was just playing and like I said, I kind of got more comfortable as the game went on. I didn’t try to think too
much about it, I just played.”

Gabe Vilardi gives his thoughts after his professional debut with the #Reign! pic.twitter.com/W1w8GlbIAd 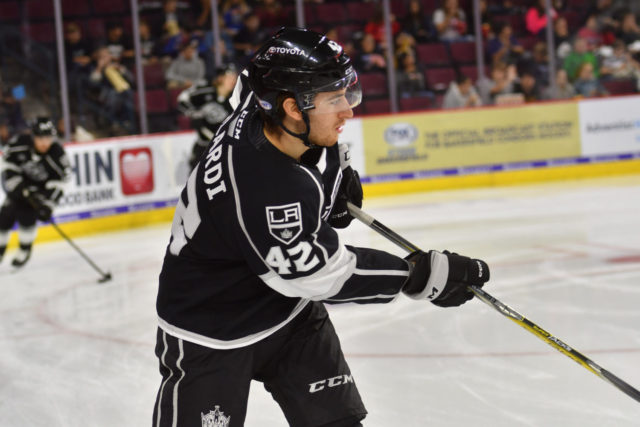