Not a permanent fixture on the second line, Clifford adheres to familiar role there - LA Kings Insider

Not a permanent fixture on the second line, Clifford adheres to familiar role there

So, you may have noticed that the LA Kings are again using an unorthodox forward grouping. Ilya Kovalchuk has been bumped down to the fourth line alongside Nate Thompson and rookie Sheldon Rempal, while Kyle Clifford was promoted to the second line alongside Jeff Carter and Tyler Toffoli. “He’s a guy that works hard and he plays hard. He’s been a good factor,” Willie Desjardins said. “I’ve seen him a lot in the highlights, and that’s good for us.”

Obviously, the story here is Kovalchuk, who signed a lucrative three-year contract on July 1 after a competitive courtship process in which he cited a desire to win and the ability to play with high-caliber players as reasons behind his decision to sign with Los Angeles.

“They said that they were really interested in me, and that was the most important because before I came here, I wanted to go to the team that really sees me where I can be productive,” he said on July 14. The Kings are a league-worst 8-14-1 through 23 games, and their prized free agent signing appeared in only six minutes and 20 seconds of Sunday’s 5-2 win over Edmonton. 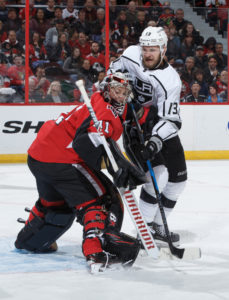 So, Kyle Clifford, a high-energy and character role player who has moved up and down the left side of the lineup during imperfect fits of alignment, will continue to get a look with players whose roles are to provide offense.

“I stay the same no matter where I play,” he said. “I’m not going to try to be Jeff Carter out there. I’m just going to be myself. You just try and create space to go to the net. You know they’re shooters, and I think they’re also really good playmakers too, so you’ve just got to be ready at all times. They want pucks going to the net, so I’m going to the net.”

He’s done a good job at doing so. There aren’t many positive figures or stories through the first 23 games, but Clifford has been one of the players maximizing his skill set and taking advantage of a boost in usage. He logged 14:16, 10:34 and 12:42 in the three games in which he skated primarily with Carter and Toffoli, his first stretch of logging at least 10 minutes in three straight games since late March. He scored against Colorado, and with three goals, is on pace to best his career-high of seven, set in his 19-year-old rookie season in 2010-11 and equaled over 48 games two seasons later. His goals per 60 minutes of ice time is 0.95, which ranks second on the team behind Matt Luff’s 1.84.

This isn’t some player redefinition story. Clifford will always be someone who logs tough minutes, does the plumbing around the perimeter, goes hard to the opponent’s net and occasionally sticks his nose into some funny business to rally and defend his teammates. He’s done a good job continuing to adhere to that role during the recent ascent in the lineup.

They do play together from time to time, and while the offense isn’t going to be Clifford’s hallmark, the duo have helped guide the Kings towards the attacking end when used together. Clifford is solidly in the black possession-wise this season, with a miniature goal spike aided by his 10.3% five-on-five shooting percentage. Since the start of the 2016-17 season, Los Angeles boasts a 54.4% Corsi-for percentage when Clifford shares the ice with Carter, and 57.9% when Clifford and Toffoli are used together.

But the possession numbers were also quite good when Tanner Pearson linked up with Carter, and Clifford isn’t any sort of long-term replacement for the left wing who was traded to Pittsburgh two weeks ago.

“I think our line, we play pretty simple,” Carter said. “We’re a north-south line and we put pucks at nets. When you do that, you always need a guy at the net. Cliffy knows that, and he goes there. He goes to the hard areas.”