–The vitals: Go see Cal. Michael Amadio and Paul LaDue remained on the ice for extra work and are not expected to play tonight. Gabe Vilardi continued to skate with the group, and he’s getting a little bit closer to what will be a conditioning assignment with the Ontario Reign. He’s roughly two weeks out from that assignment, which may be a little bit generous, but the team is cognizant of Vilardi rearing at the gates and needing to get into games after weeks of practices and solo skates. When that time comes, he’s looking at getting into three games with Ontario, though Los Angeles could petition to extend the assignment. There’s only one home date in that ballpark – the Sunday, December 2 game versus Tucson. There’s also a Thursday-Friday back-to-back at Bakersfield and Stockton on November 29 and 30, and a Friday-Saturday set in Tucson on December 7 and 8. There’s your Gabe Vilardi-to-Ontario general ballpark.

–Their vitals. Tonight’s starter, Jake Allen, is having a rough go but has posted exceptional numbers in his career versus Los Angeles, going 5-2-0 over eight games (seven starts) with a 1.94 goals-against average, a .939 save percentage and a shutout. The Blues are banged up. They’ll be without Carl Gunnarsson (upper-body), Jaden Schwartz (upper-body), Alexander Steen (upper-body), Robert Bortuzzo (IR/lower-body) and Patrick Maroon (IR/upper-body). They’re coming off a 1-2-0 road trip in which they sandwiched a pair of losses at Chicago and San Jose around a win at Vegas. Per Jim Thomas of the St. Louis Post-Dispatch, they’re expected to line up with forward groups of Fabbri-O’Reilly-Tarasenko, Perron-Bozak-Schenn, Blais-Thomas-Soshnikov and Sanford-Barbashev-Sundqvist with defensive pairings of Dunn-Pietrangelo, Edmundson-Parayko and Bouwmeester-Schmaltz. Though Los Angeles had dominated much of the mid-decade series with St. Louis, the Blues are 6-2-0 in the last eight head-to-head matchups.

In recent years, the Blues have banked heavily on defensive scoring, and with effective puck-movers and shooters in Colton Parayko and Alex Pietrangelo, and now Vince Dunn, it’s not hard to see why they’ve had success. “You watch their video, and they put lots and lots of pucks to the net,” Desjardins said. “They look to shoot, so we’ve got to get in shooting lanes, for sure. We have to pressure their defense, as well. They’re a good group, a highly skilled group. We’ve seen it on video. We know they’ll shoot the puck, so we just have to make sure we’re in the lanes and applying some pressure.”

–There were several ways to look at the Kings’ 5-3 loss in Nashville on Saturday, a game in which they played a strong first period and came out ahead 3-2 after a five-goal second but were unable to hold on, surrendering three third period goals. On one hand, that emotional involvement was about as high as it had been this season, and Willie Desjardins loved the team’s first period. On the other hand, if it wasn’t for Cal Petersen, Los Angeles would’ve surrendered a few more than five.

“We didn’t play as aggressive [in the third period], for sure,” Desjardins said. “I think we are a little bit of a work in progress, and I thought the last game was a big step for us. It was the first time I’ve seen us a little bit the way I’d like us to play. But, saying that, we’ve had a couple first periods that have been pretty decent and we haven’t been able to maintain. And I think the better you get as a team, the longer you can maintain it and keep pushing. I think that’s something we recognized. The good thing is we did do it for a period of time, so we know we can do it. We just have to do it longer.”

It was a loss that left the Kings’ leadership group noticeably angry, “because we started out hot and had a really good first period,” Drew Doughty said.

“Even after the second, even though it wasn’t as good, I still think in our hearts we all felt like we were going to win that game and we had a great opportunity to beat one of the better teams in our conference. I think we all took that loss really hard. We take every loss hard, but that one felt extra crappy.”

–Austin Wagner returns to the Kings lineup after a five-game Ontario assignment in which he scored a pair of goals and found success by simplifying his game and playing more minutes in a wide array of situations.

“I made some plays and felt better about my game,” he said. “When you’re PKing and you’re scoring those goals and getting shots and stuff like that, it helps momentum. Stutts down there, he was good with me and he helped me out a lot, so I’m very fortunate to have that opportunity. With the team moving down to El Segundo this year, that’s a positive with us being there. You’re with the big club but you can go down, and you can find your game and develop, and that was good, too. They’ve got a lot of development ice with the development team, too.”

The Reign joining the Kings in El Segundo aids the convenience of roster moves, as did this current road trip. Both the Los Angeles and Ontario were in the Midwest over the weekend, and after scoring in a narrow 2-1 loss to Milwaukee – Wagner said goaltender Charles Williams, who had been recalled from ECHL-Manchester with the goalie pipeline affected due to injury, was very good – he caught a quick flight to meet the team in St. Louis on Sunday.

Desjardins, like so many of us, is highly aware of Wagner’s speed.

“That’s something we want to add to our lineup,” he said. “We would like to be a quicker team, so he’s a guy that can come in and give us some quickness. Luff came up and showed he can play. I think young guys are more able to step in the lineup now than they used to be, so I think he’s a guy that maybe can give us a little bit of energy.”

Wagner was able to generate chances in his first two games against San Jose and Detroit and will look to connect on additional looks that could lead to his first NHL point. This will be his ninth game of the season and his NHL career.

“With me, it’s just about skating and checking and playing a sound game. I’m not going to worry about scoring or not. If I get the chance, I’ve got to put in the back of the net, and if I do get a shot, I’ve got to bear down and put it in the net,” he said.

–The Blues, like the Predators and Blackhawks, will join in the worldwide aid to assist California wildfire victims:

Opponents on the ice, hockey family off of it. Proceeds from the 50/50 raffle and Blues for Kids silent auction from tonight's game vs. @LAKings will go to help victims of the California wildfires. https://t.co/ueey6FGt0K 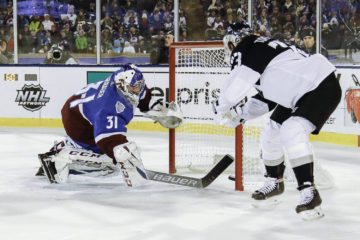