After a day-off yesterday, the Reign were back in action this afternoon at Toyota Sports Center for their first practice of the week. Here’s how the team lined up at today’s skate –

Defensemen and goaltenders were mixed throughout practice –

So about the goaltending and that name you may not recognize on that list.

Earlier today, Ontario added goaltender Cole Kehler (reassigned by LA, from Manchester) and forward Sam Kurker, who has appeared in 32 AHL games with Albany, Springfield and Cleveland over his professional career, amassing 3 goals and 7 points. The 24-year old forward is a Northeastern University product (hey Alex Faust) – Kurker spent his junior and senior seasons with the Huskies, following two seasons at Boston University.

Kurker has been a top ECHL performer with Manchester over the past two seasons (37 points from 47 games) and brings a 6-2, 203 pound frame as well. Watched Kurker in Manchester quite a bit last season, one of their top forwards who made an impact from my point of view on most nights. Looking forward to seeing what he can do at the AHL level.

Kehler is recovering from a lower-body injury (he practiced today and had been skating recently in Manchester as well) – As Mike Stothers mentioned a couple of weeks back, Kehler’s injury prevented his original recall when Peter Budaj went up to the NHL, paving the way for Evan Buitenhuis and then Charles Williams to claim an AHL spot.

Kehler appeared in one game with Manchester (28 saves on 31 shots in a loss to Maine) and has yet to make his AHL debut with Ontario.

– Defenseman Kurtis MacDermid scored the game-winning goal on Sunday against Stockton, his second goal and seventh point of the season from 12 games played. MacDermid is also a +5 on a team that is -11 on the season, with his rating tops on the Reign. MacDermid noted that he, personally, doesn’t pay much attention to the numbers and just focuses on his game.

“You know, I don’t really look at points too often, I just make sure I’m doing the right things in the d-zone and for my teammates,” MacDermid said. “A good defense is a good offense, so I think that’s what’s been the game plan for us as a d-core.”

– Boko Imama has had his play praised by Reign Head Coach Mike Stothers a couple of times recently after games. The 6-1 forward struggled, at times, to stay in the lineup last season, but Stothers noted after a recent game that Imama is making a statement with his play that he doesn’t want to come out this season, something that he noted after today’s practice.

“I just do my best to do what I do on the ice,” Imama said. “Playing hard, playing physical and taking care of the little details that can make a big difference so that the coach can trust me every night and try to play every game.”

– The Reign announced a killer Black Friday Game (11/23) special yesterday – the first BOGO offer in franchise history. Fans can buy one ticket (Upper Level for $25, Lower Level for $35) and get one free. The seats will be placed together in both price levels. The offer runs through Wednesday, November 21 at 5 PM. CLICK HERE to take advantage of the buy one, get one free sale.

– Additionally, the Reign will be giving away a ton of items at that game. CLICK HERE to enter to win a new TV, an XBOX One, a PS4 and an iPad Mini amongst several others, including gift cards in $50 and $100 quantities (think of your favorite Reign Insider if you win that Dunkin gift card, have missed my Dunkin fix on the West Coast).

On shaking the label of being thought of as a “fighter” first
I don’t really think about it. People obviously know I have a reputation, but I just let my play do the dictating. What other people think about me, it doesn’t really matter to me. I just go out and do my business.

On adopting more of a leadership role amongst the defensemen this season
Stuff that I learned when I was younger, that older guys taught me, I’m just trying to pass the message along. I don’t really say too much, but when I do, it’s just little things here and there and that can help them to be successful.

Imama on feeling more comfortable in Year 2 versus his rookie season
For sure. As a second-year guy, you know what to expect a little bit. In the summer, I worked on some things that I knew would help my game, so I think this year I’m a little bit more confident and believe a little bit more in myself and I’m just building up to bring an even better contribution on the ice.

On how things are coming together for the Reign after a slow start
You know, we’re pretty young this year and we knew we had to battle through some stuff to get on the right path, but so far, I think we’re doing pretty good. We bounced back from a tough loss, got a big on Sunday in Ontario and I think we’re just progressing as a group moving forward. 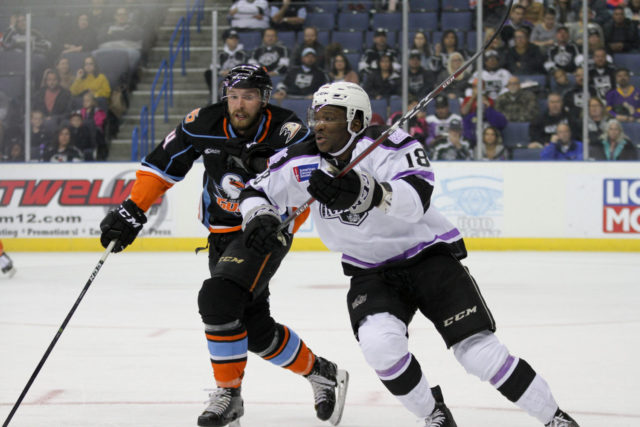