This will be a quick post, because if this morning’s traffic is any indication, it should take somewhere between eight and nine hours to travel from El Segundo to Staples Center during rush hour, and I’d like to try to arrive in time for post-game media availability. But it’s not necessarily an “evergreen” story, so I wanted to make sure it got up today to provide the appropriate context for tonight’s Kings-Leafs game.

If you saw Saturday’s game against Calgary, you’re already aware that Los Angeles’ didn’t muster enough of a net-front presence.

“Structurally, I thought we played really well, but 12 shots through two periods isn’t enough,” Dustin Brown said. “It doesn’t matter if you’re a high-scoring team or a low-scoring team. That’s just not enough. We need more volume at the net, we need more people at the net. I think when we get away from that, it really shows, and Calgary was just one of those games that for whatever reason we didn’t have enough guys going there consistently. I think that’s another thing about it – when we are good at it, every line’s doing it. It’s not just one. Maybe against Calgary we had one line doing it and then another line not. When we’re playing well as a team, it’s very consistent getting guys and pucks to the net.”

It’s one thing to say, “get bodies and pucks to the net.” But, as some hockey fans forget, there are two teams on the ice, and the opposition is doing everything possible to keep bodies and pucks from converging in front of their goaltender. On Tuesday, I spoke with Willie Desjardins and Brown about ways to stockpile those second and third chances as a means to boost an offense. Their answers, along with several Drew Doughty musings, are below. 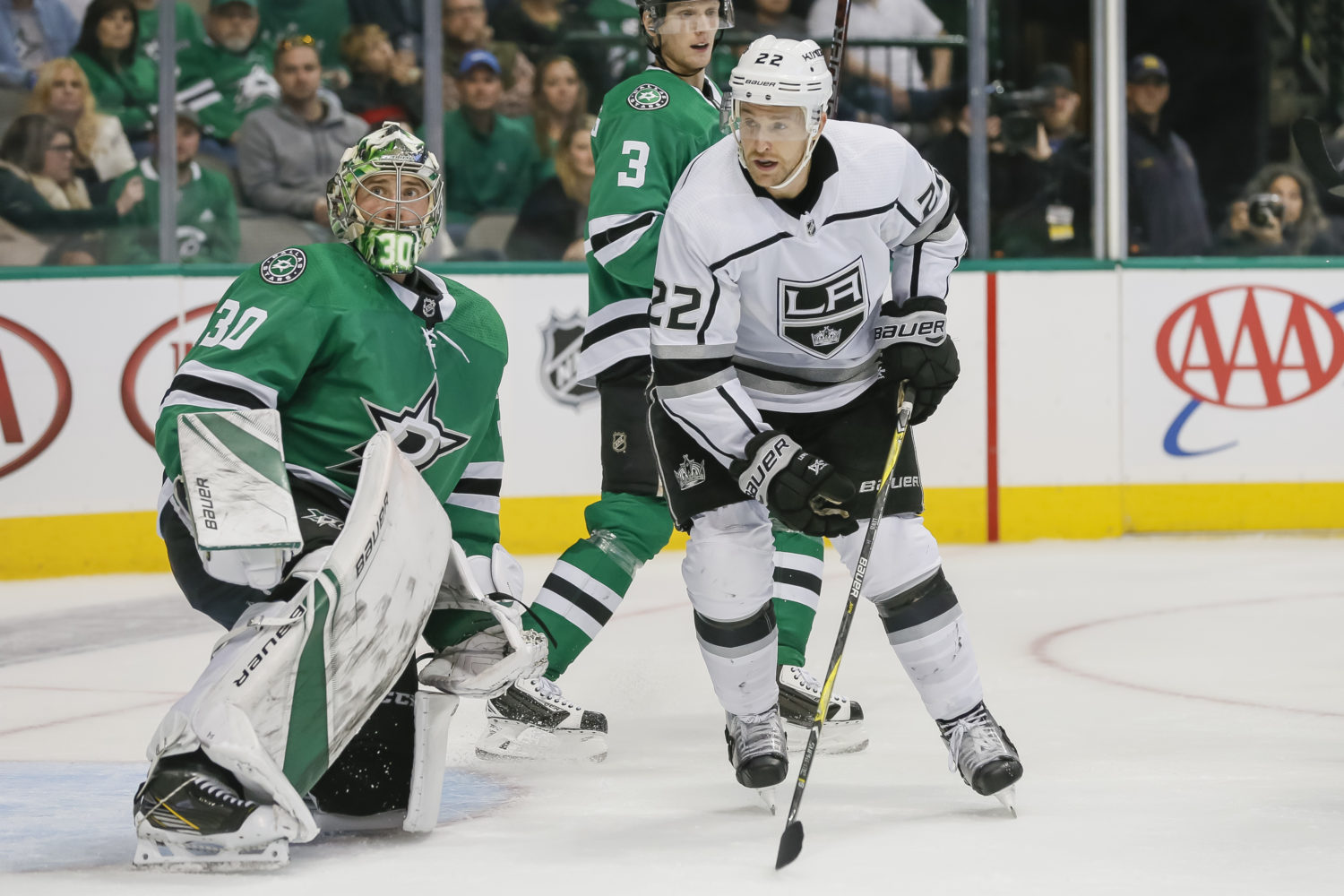 Willie Desjardins, on where the net-front presence originates:
It has to be a mindset. Like, we have to know when we come in the zone, we’ve got a middle drive. We’ve got to have a guy going to the net right off the start. Whenever our D are looking to shoot, you have to have somebody finding their way. And it is hard to get in that area. The D, their job is to box out, so it’s not easy to get in that area. But in the Calgary game, of the three games I’ve been here, we certainly didn’t get to the net-front in that game, and it was a game we needed to.

Dustin Brown, on forwards other than him and Tanner Pearson that are effective goalie screeners:
I think we have a lot of guys that are good at it. It’s just a matter of being consistent with it. I think A.I. is another guy maybe not directly in front of the net, but he always finds those pockets maybe five, six feet up. Sometimes it’s just a mindset more than anything else.

Brown, on where the pivotal junctures of tonight’s game will be:
I think the start. We’ve got to be good early. It just comes down to having a really good start for us. I don’t think we came out very well against Calgary. We kind of waited and waited, and you can’t do that.

Drew Doughty, on Toronto:
We can’t play a run-and-gun game with them. They’ll be beat us that way. We’ve got to play a good, solid two-way game and minimize our turnovers and try to have the puck as much as we possibly can.

Doughty, on how to make something of the home stand:
Obviously, we want to come out positive on the homestand and come out 4-3. We can’t be digging ourselves any deeper of a hole. We need to start putting wins together, we need to be more consistent and put a row of wins together. If we keep winning two, losing one, it ain’t going to help us in the long run, so we need to put a winning streak together. It starts with Toronto tonight. Get on a roll tonight.