INSIDERS. A happy Thursday afternoon to you. The LA Kings took the Toyota Sports Center ice shortly before 10:00 a.m. and did not tip their hand towards any lineup changes. Expect the following alignment for tonight’s game against Minnesota (7:30 p.m. / FOX Sports West / FOX Sports app / LA Kings Audio Network):

–The vitals: Jack Campbell left the ice first and will be expected to draw the start versus the Wild. His lone career start against Minnesota occurred two weeks ago, when he stopped 22 of 24 shots in a 4-1 loss at Xcel Energy Center. Paul LaDue, Michael Amadio and Gabe Vilardi remained on the ice for extra work with Peter Budaj, so they’re not expected to play tonight. The Kings are 29-20-14 all-time against the Wild, with 12 of the last 27 games extending to overtime or a shootout.

–Their vitals: Per Michael Russo of The Athletic, Minnesota will start “the taller one” in goal. We’re going out on a limb and assuming that’s 6-foot-6 Devan Dubnyk and not 6-foot Alex Stalock. Come to think of it, we can’t really rule out a trade for Ben Bishop at this point. WHAT ARE YOU HIDING, GABBY? Dubnyk is 8-5-2 in his career against Los Angeles with a 2.42 goals-against average and a .924 save percentage. Eric Staal should return to the lineup after missing the Wild’s 4-3 loss at San Jose due to illness, though Matt Hendricks isn’t expected to go. This is the fifth of a franchise record seven straight road games for the Wild, who will continue their trip in Anaheim on Friday and St. Louis on Sunday. They’re 7-2-0 in their last nine and are tied for third in the league with 14 points since October 16.

“They’re a good team. They have lots of tempo in their game,” Willie Desjardins said. “I think they’ve got some forwards that can move. They’re heavy, their back end, it’s mobile. They get a lot of point production out of their back end. I think they’re a team that you have to be really ready. They give you nothing. Like, they’re a good defensive team and they can strike quickly offensively.”

–The Kings’ game has been rounding into order, but there are still plenty of areas that’ll need to be addressed if they’re to generate any success this season. One of those areas is in defensive scoring, which showed good life in Darryl Sutter’s final season and John Stevens’ full season as head coach. In 2016-17, the Kings tied for eighth in goals by defensemen; in 2017-18, they tied for 11th after floating near the top of the league through the first two-thirds of the season. It’s nice to have the Drew Doughty Lamborghini in the garage.

This season, Los Angeles is tied for 28th in goals by defensemen. The only defensemen with goals are Paul LaDue, Drew Doughty and Alec Martinez. Each has one.

“I know. We’ve got to get going,” Jake Muzzin said. I think our shot totals are down as well.”

This is still based on a small sample size – and one weighed heavily by a dreadful start in a number of situations, offensively and defensively.

“The first few games, we weren’t really generating a lot. No zone time, and either you get a zone time shot or an off-the-rush shot, and we weren’t really doing any of that,” Muzzin said. “The last few games I thought we’ve done a better job at doing that. I think another factor is we have one D on the power play at the start, so that takes a guy off there, if you’re looking at numbers or what-have-you. But we definitely have to shoot the puck more, get more pucks to the net from the point, whether that be in the zone or on the rush – fourth man on the rush.”

That should happen naturally. The power play has goals in four straight games, and with Dustin Brown again healthy and screening goalies, there should be an environment in which more seeing-eye shots find the net.

Also, like many NHL teams, the Kings are looking to deploy a less static attack under Willie Desjardins, sending additional numbers up into the rush.

“I want them to jump in the play every time, and then if it’s not there, they’ve got to come out,” Desjardins said. “But they always have to start to try to go with the rush. If there’s nothing there, then come out of the rush. But make sure you’re always ready to start.”

Alec Martinez is a defenseman who is confident at jumping into the play, and after he received a pass from Trevor Lewis, fed Kyle Clifford for a high-speed, contested break rush goal against Anaheim on Tuesday.

“That’s the activation that we’re talking about,” Muzzin said. “Filling lanes, jumping when there’s an opportunity. That was a great play.”

This will be an interesting trend to follow over the course of the season. Last year, the Kings spoke about getting numbers into the rush, and for the large part did so through the first half of the season. But over the second half of the year, and clearly this season, the secondary offense that can offset some of the top players’ scoring burden has fizzled.

Given the brewing circumstances – an improving power play, Dustin Brown’s net-front ability, a coach that wants to activate defensemen and a clear focus to get more pucks to the net – don’t be surprised to see Los Angeles build on its total tonight.

“I think it’ll start coming around,” Muzzin said. “Our whole team, our goals were down in the first six, seven games, anyways. It’s all reflective of how the team’s going, I think.” 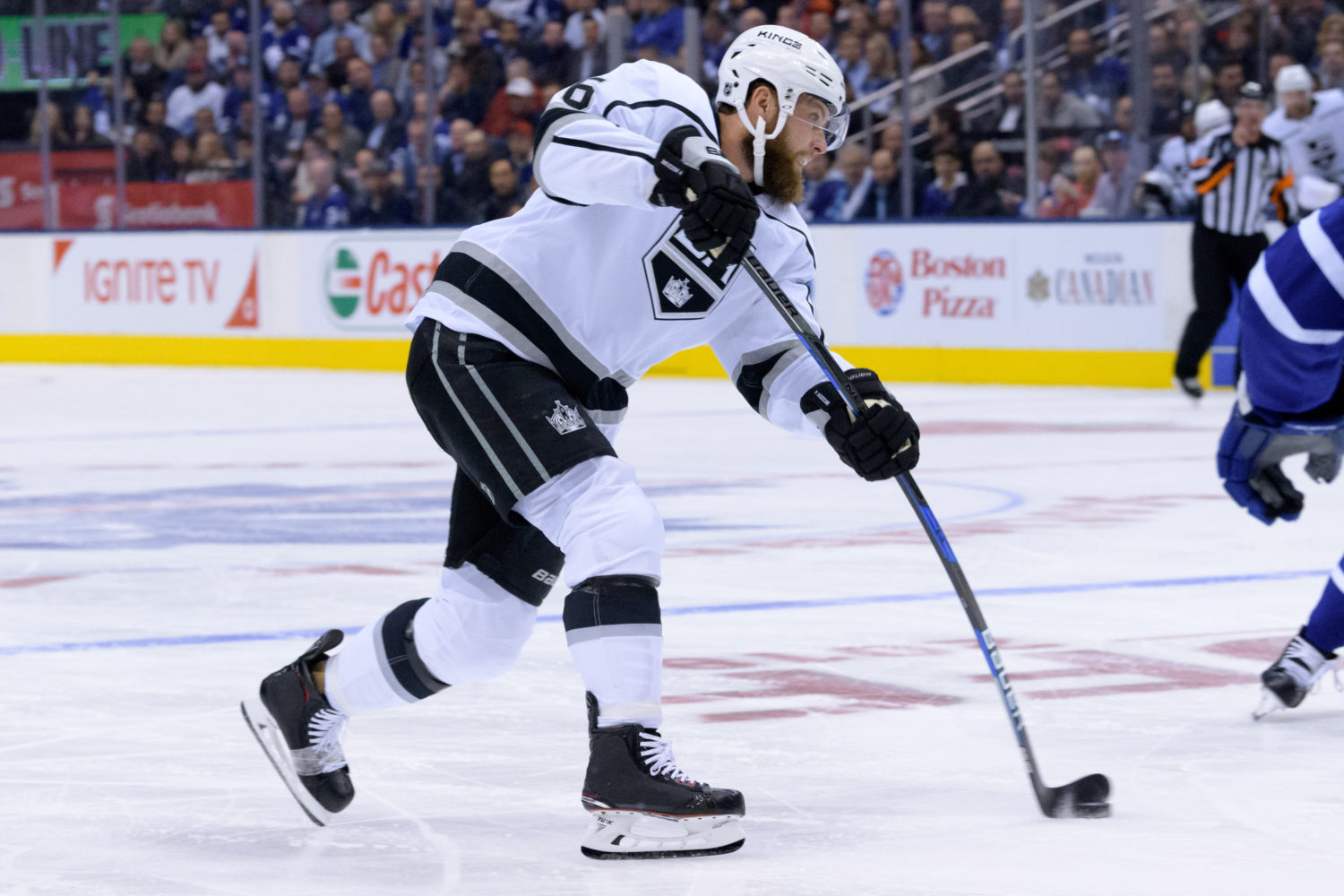