The Reign had a rare 9 AM practice this morning, their second-to-last skate before they travel North to take on the Stockton Heat in the front-end of a home-and-home set. The two teams will square off on Friday at Stockton Arena, before the rematch on Sunday afternoon in Ontario.

Ontario is 1-0-1 against the Heat so far this season, with each team collecting three points from the two games played. The Reign had a thrilling, come-from-behind win in Stockton on October 6, as they overturned a three-goal deficit in the first period, before, six days later, the Heat came back from two goals down inside 10 minutes to play in the third, eventually winning 5-4 in overtime.

Following today’s practice I chatted with Reign Head Coach Mike Stothers on building off of the team’s momentum, generated with a pair of wins last week, getting contributions throughout the lineup and a couple of recent NHL debuts by Reign players/alums.

Some longer responses from Stutts today, but some really good stuff regarding the progress his team showed in last weekend’s games, what it means to truly be a “contributor” and two of his players that recently made NHL debuts. I got a lot out of today’s conversation – worth a read and a re-read to soak in the messages.

On what the Reign are looking to do to build off of last weekend’s momentum
We’re just trying to continue to fine tune our game and build on some of the positives of what we’ve been trying to get improved. I think we’ve been more responsible with the puck, which is good. I think we’ve been a little bit harder to play against, meaning that when we have it, we don’t give it up and when the other team has it, we’ve got a pursuit and an intent to get it back. I think we’ve been better in our end at sorting things out and we’re going to have to be – if you think back to the last time we played Stockton here at home, one of their defensemen had three goals. He’s coming in on the back side, leaving from the blueline into the back post and we’ve got to recognize that situation. The one guy scored three goals last time we played them, well you know they’re going to be looking for it again this time, so we’ve got to make that adjustment. I think we’ve gotten some good contributions from throughout our lineup. The other day, we had a big goal from Sam Herr, which for Herrsy, I know he’d like to score more, but that’s the type of things you need, right? I think we’ve been a little bit better with our discipline in not taking quite as many penalties, although we still need to reel in the too many men on the ice, we’ve got to recognize when we’ve got five guys out there, we don’t need a sixth. We addressed that as well. It’s one of those things where we’re hoping that we’re getting better and it’s just as a coach, you always caution that maybe it’s two steps forward, one step back. It’s almost, if we were playing more often, it might’ve been better, but I do like having the practice time too, because you can get back and re-establish the things we need to continue to work on. We’re coming, I’m happy with the guys, I think they’re a good bunch and I think that they want to learn and they want to get better and that’s also a positive.

On whether it’s encouraging to get contributions from four lines
Absolutely, that’s the only way you’re going to have success. Usually, every team has a so-called first line or offensive line that, on any given night, they’re going to do their fair share of damage but they’re not always going to produce. It gets a little predictable and teams match up and everything else so you need other guys to believe that they’re more than just checkers, you want them to be contributors. I’m not saying, necessarily, that you have to be the scorer but you need to be a contributor. You mentioned that Boko gets an assist, Bauman gets an assist, that’s a huge thing. It obviously means that somebody finished the play, but let’s be a contributor. What are you going to do to help the team, what are you going to do to make a difference in either a victory or a close defeat? Boko had a heck of a game, good for him. He’s had a tough time getting into the lineup and now he’s making a statement to us as coaches that once he’s in, he doesn’t want to come out. Baumer was out of the lineup, he goes back in and he’s making a statement to us that “I want to be a contributor, I want to stay in this lineup, I don’t want to be looking from the outside.” That’s good, a little healthy competition within the ranks, nothing wrong with that.

On whether the team has a “next man up” mentality
Usually all of these guys think they’re first line guys. Everybody. Everybody thinks they’re that first line guy, everybody thinks they’re a power-play guy, everybody thinks they’re a top two defenseman, it’s human nature. The reality is, no you’re not, we all have a role. We all have a fit in the team or in the organization and with that, there comes an opportunity where when two guys go up, things kinda get bumped up a little bit. If you’re going to make that statement or have that belief, then you better produce in that spot with those extra minutes and those extra situations. A lot of times, guys find that it’s a difficult situation to be put in. There’s many guys that are a terrific third-line center, but then they’re not a real productive first-line center. Matchups aren’t right, they’re not used to that kind of workload, expectations, pressure that goes along with it. But here at the American League level, I mean it is an opportunity and that’s what we’re trying to give all these guys, an opportunity to show us what you’ve got and an opportunity to get better. You hope that someone rises to the occasion and we hope that we never see Mike Amadio and Matt Luff walk through these doors again, hopefully they stay up with the Kings that would be great.

On Matt Luff making his NHL debut
I think it’s great – Luffer, he had a good first year for us. He’s got something, he’s got a swagger, there’s something about him that makes you think he’s a player, you know? And he might very well be a good NHL regular player, but he needs the opportunity. He’s played a couple of games, and whether he stays up and continues in that, and continues to impress the coaching staff there with maybe some more minutes, or if he has to come back down. Quite often, guys go up, they come back, they go up and they come back and it’s not maybe until the third or fourth recall that they never come back. It’s just because each time they get a little bit better, they get a little bit more of what’s expected of them up there. We’re happy for Matty it’s awesome. He’s a kid that just loves to play the game. It’s awesome, it’s good for everybody.

On Sean Walker’s NHL time and what his return brings to Ontario
I thought Walks did real well up top. He showed up there what he shows down here, he’s a real good skater, he gets around the ice. He’s a busy guy on the ice, he’s all over the place and up there, they don’t quite need that, down here we give him a little bit more reign because that’s what he does and that’s one of his strengths. You don’t want to corral it too much, but he’s also got to play within the system for everybody else. But his skating makes him a guy that’s close to making it, but then when you go up, you see that he’s a little undersized, that maybe he’s got a bit of trouble in his own end containing or ending plays, which is huge in the NHL. You’re playing against bigger guys, stronger guys, you’re playing in the elite of the NHL. That’s a part of his game that we needed to work on when he first came here. He’s gotten pretty efficient at it here in the American League level, but it’s even tougher when you’re playing against the big boys. You go into Dallas and you’re playing against Benn and Spezza, guys like that, it’s not an easy task for any defenseman. It was good to see him get his feet wet and get indoctrinated. Maybe he’s another guy that gets another look and the next time he goes up he’ll be that much better for it. 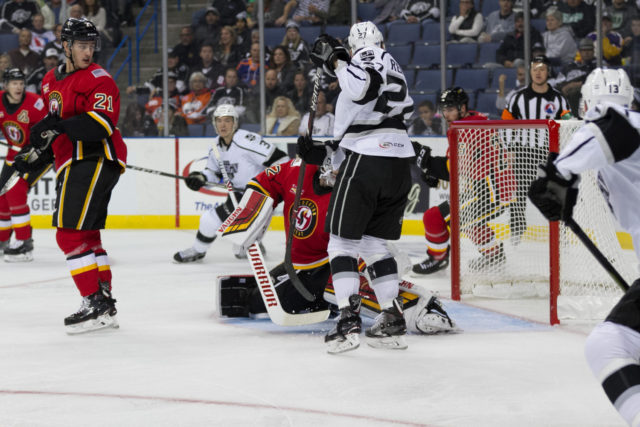 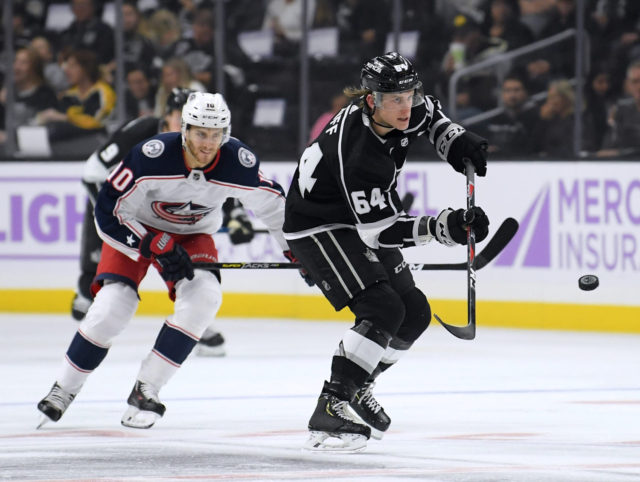