INSIDERS. A very happy Election Day to you. The LA Kings caucused on the Toyota Sports Center ice at 10:00 a.m. under the following ticket:

–The vitals: Jack Campbell left the ice first and will be projected to start in goal. He’s 0-1-0 with a 4.50 goals-against average and an .885 save percentage in his career against Anaheim, which includes his first career start early in the 2013-14 season and his 20-minute Kings debut in November, 2016. Michael Amadio and Paul LaDue remained on the ice for extra work along with Gabe Vilardi and Peter Budaj. Vilardi took part in the entire skate and was clad in a gray jersey instead of a red one. While it’s an indication that he’s getting closer, it doesn’t mean he’s been cleared for any sort of contact. It’s more to continue to get him acclimated to the group and raise his intensity and focus, which is a good sign one day after it was shared that he’s also dealing with a (very) minor hip thing.

“He’s getting closer. I can say that,” Willie Desjardins said. “I haven’t seen him enough. He’s just getting going, but they’re optimistic about how he’s coming along.”

–Their vitals: John Gibson, who ranks sixth in the league with a .935 save percentage, will draw the start for the Ducks. He’s 9-3-0 with a 1.79 goals-against average, a .935 save percentage and two shutouts in his career against the Kings. Korbinian Holzer (wrist), Corey Perry (knee), Carter Rowney (upper-body), Ondrej Kase (concussion), Nick Ritchie (upper-body) and Max Comtois (lower-body) are on injured reserve for Anaheim, while Ryan Getzlaf and Ryan Kesler will be game-time decisions. Josh Manson was also placed on IR today, per the NHL’s media site, so he’s unlikely to play tonight. (Because he hasn’t played in the last three games, and because his retroactive IR stay could theoretically be moved back to October 29, there’s at least a hypothetical chance that he could also be activated today. There’s a nonzero chance of that happening, as silly as it sounds. Don’t expect him to play tonight.) Former LA Selects forward Chase DeLeo has been recalled from AHL-San Diego. The Ducks have already lost 94 man-games to injury, compared to the Kings’ 32. Anaheim is getting blitzed in the run of play and ranks last in the league with a shots-for percentage of 41.3%. Opponents are averaging 37 shots per game against the Ducks.

–Desjardins didn’t get lost en route to the rink for his first game as LA Kings head coach! “Took the right turn today. Didn’t take near as long,” he said with a smile.

All available players took the ice for his first morning skate, which, going forward, he’ll look to structure around the sense of his team’s rest and fatigue levels.

“I think a little bit of that comes from the players. My job is just to make sure they’re ready. It’s hard to say,” he said. “Like, sometimes you’ll take the day off the day before and then you’ll morning skate. Today we did both. I won’t always do both, though. I want the players to be rested for the game.”

More on this in a post this afternoon, but he’ll be joined on the bench by Dave Lowry and Bill Ranford until Marco Sturm arrives, at which point Ranford will return to his familiar perch upstairs.

There is a divisional rivalry game tonight that often elicits emotionally driven performances from both benches. For the new coach, it doesn’t necessarily matter that both teams have depleted personnel and will have the typical adrenaline and compete level associated with the Freeway Faceoff, “but I do think this type of game will give me a really good look at our team and what we have in our team, and that’s kind of what I want to see right now,” Desjardins said.

Desjardins met with every player on Monday as he continues to acclimate himself to personnel and team expectations. One topic today: Drew Doughty was back alongside Dion Phaneuf after the two were paired together for Saturday’s win over Columbus.

“I think the way that Doughty plays, things change pretty quick because you get him out there a little bit more,” Desjardins said. “Whoever he’s with, I don’t think he always stays with that guy. He moves around a bit.”

–Doughty, on John Stevens and Don Nachbaur’s dismissals: “It sucks. You don’t want to go through a coach firing. It’s basically on the players. We didn’t play well enough, and that’s why they’re gone, so it’s on us. Obviously, you kind of have mixed feelings. I had John for a long time. He taught me a lot when he was our D coach. He taught me a lot, so I had a long relationship with him, so it was tough. But now we’re just looking forward. We’ve got Willie in here, he’s supposed to be a great coach. He just cares about passion and competing, and that’s what we’re lacking. We’re moving forward here, and we’ll try to get Willie’s first win tonight.” 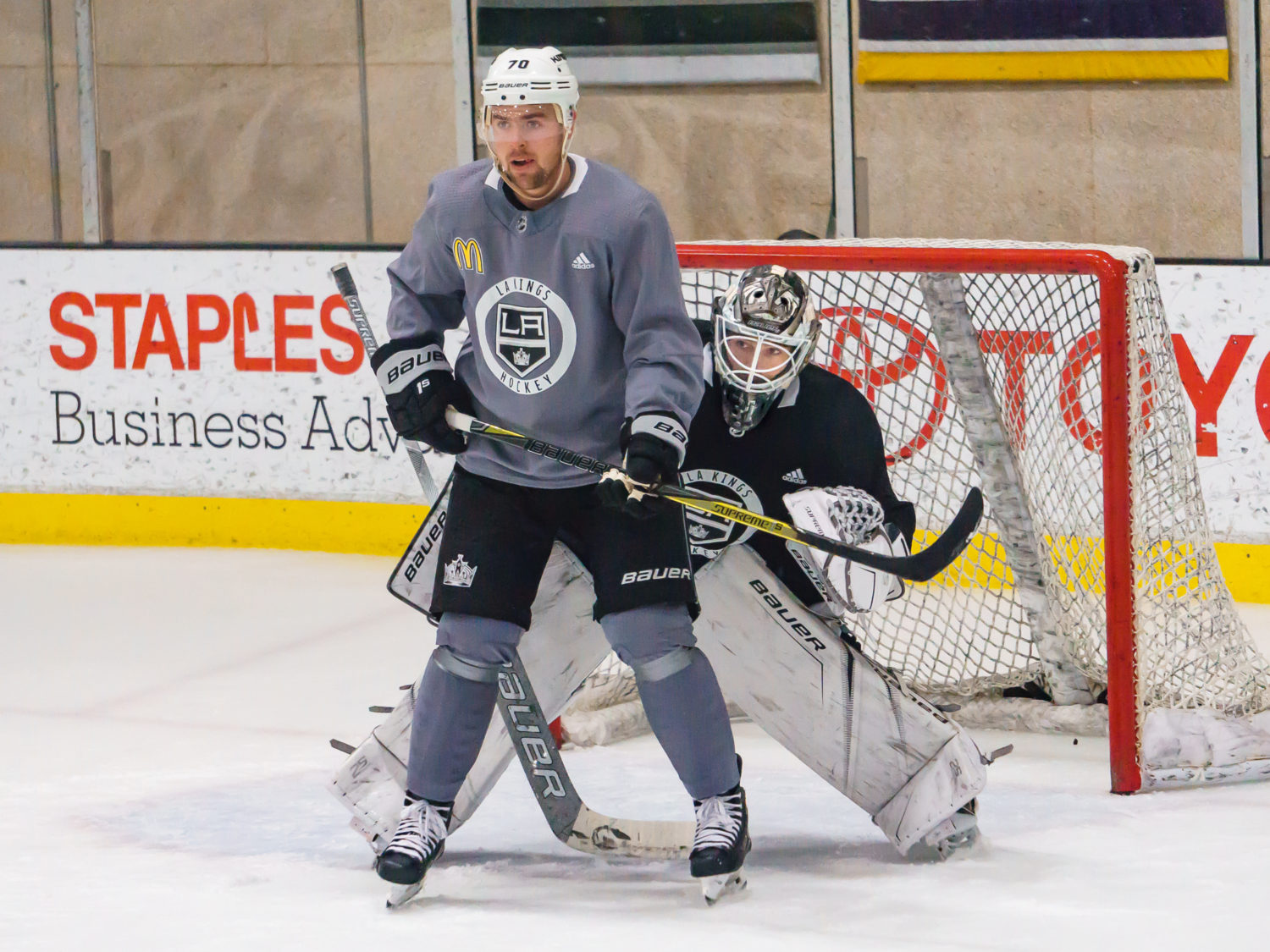 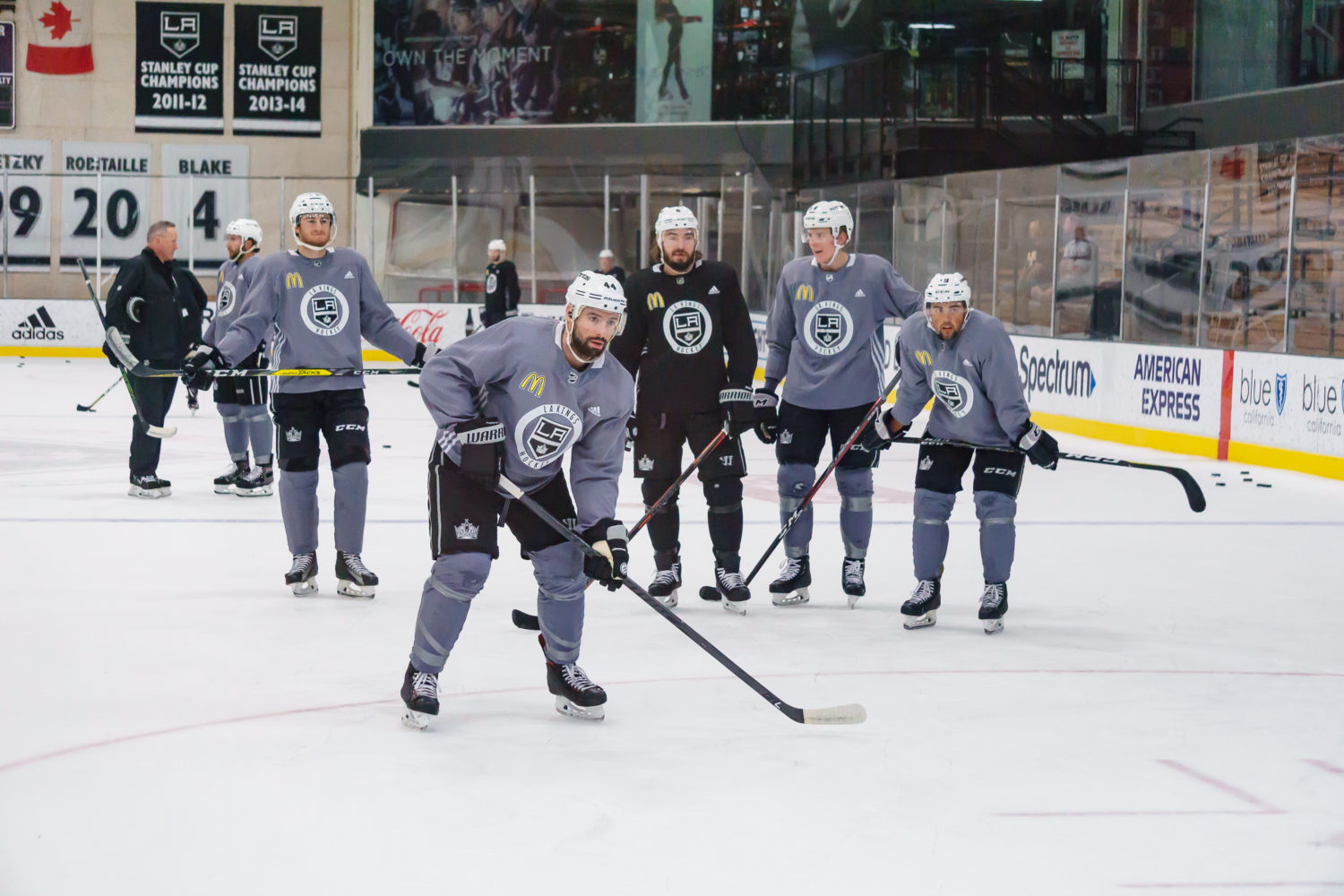 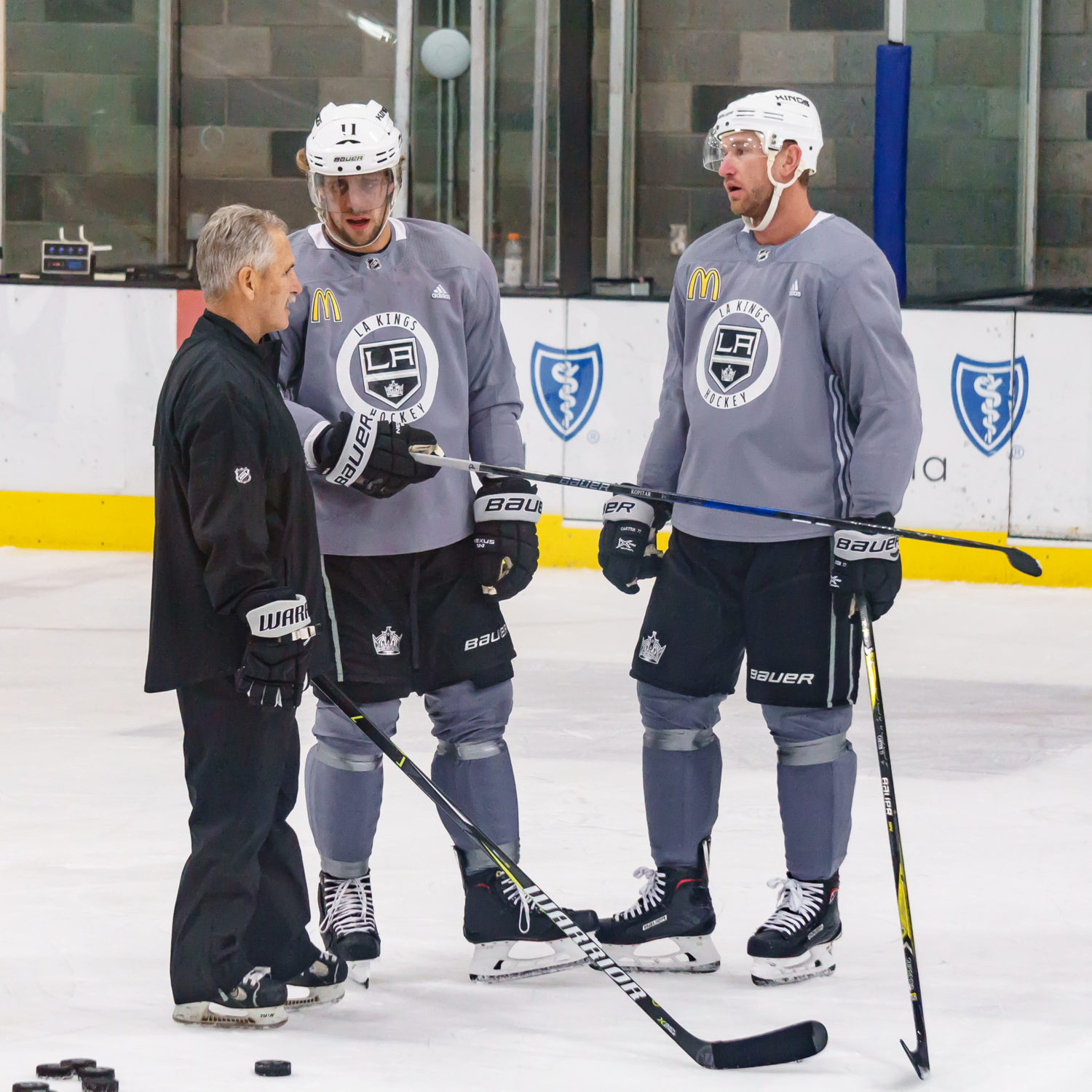 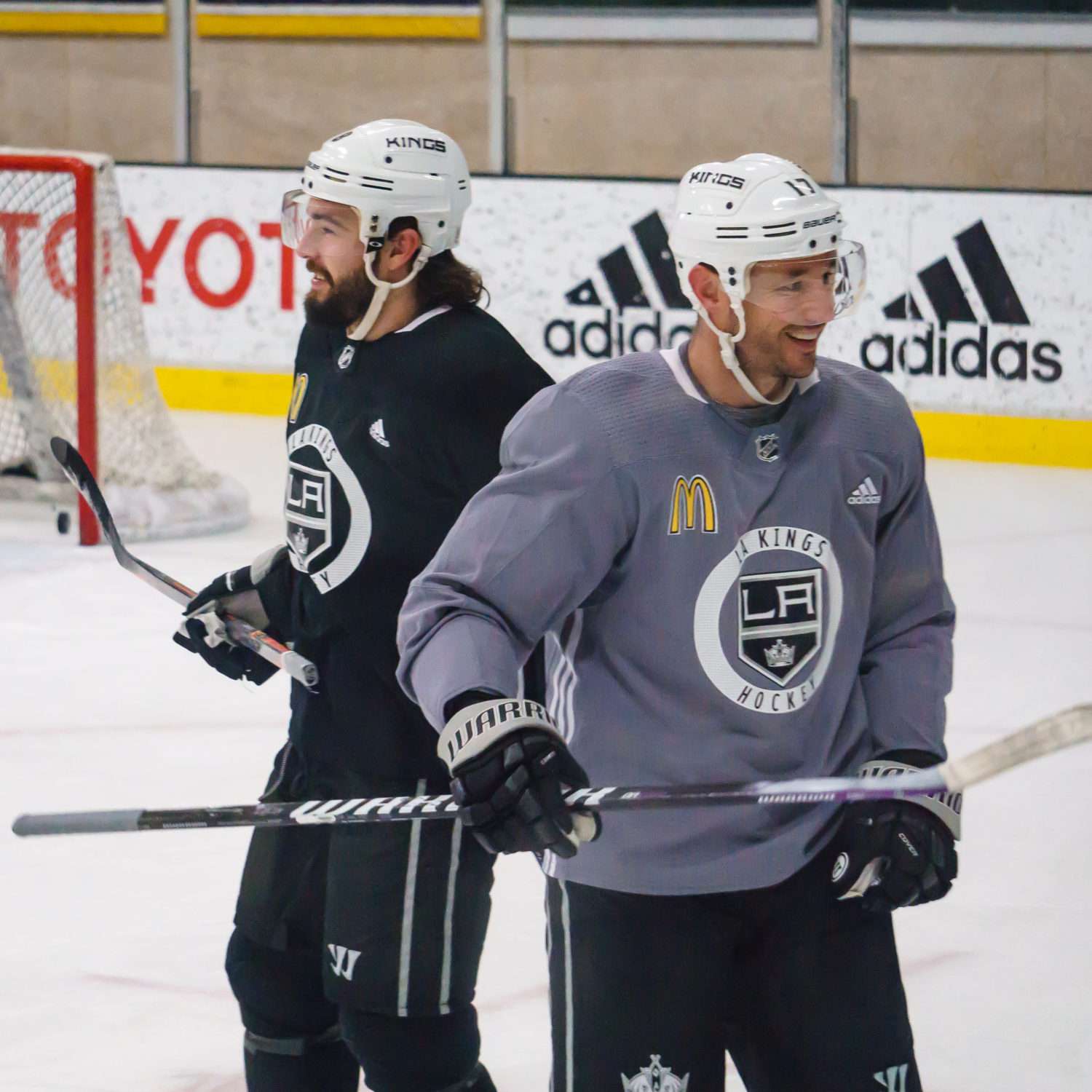 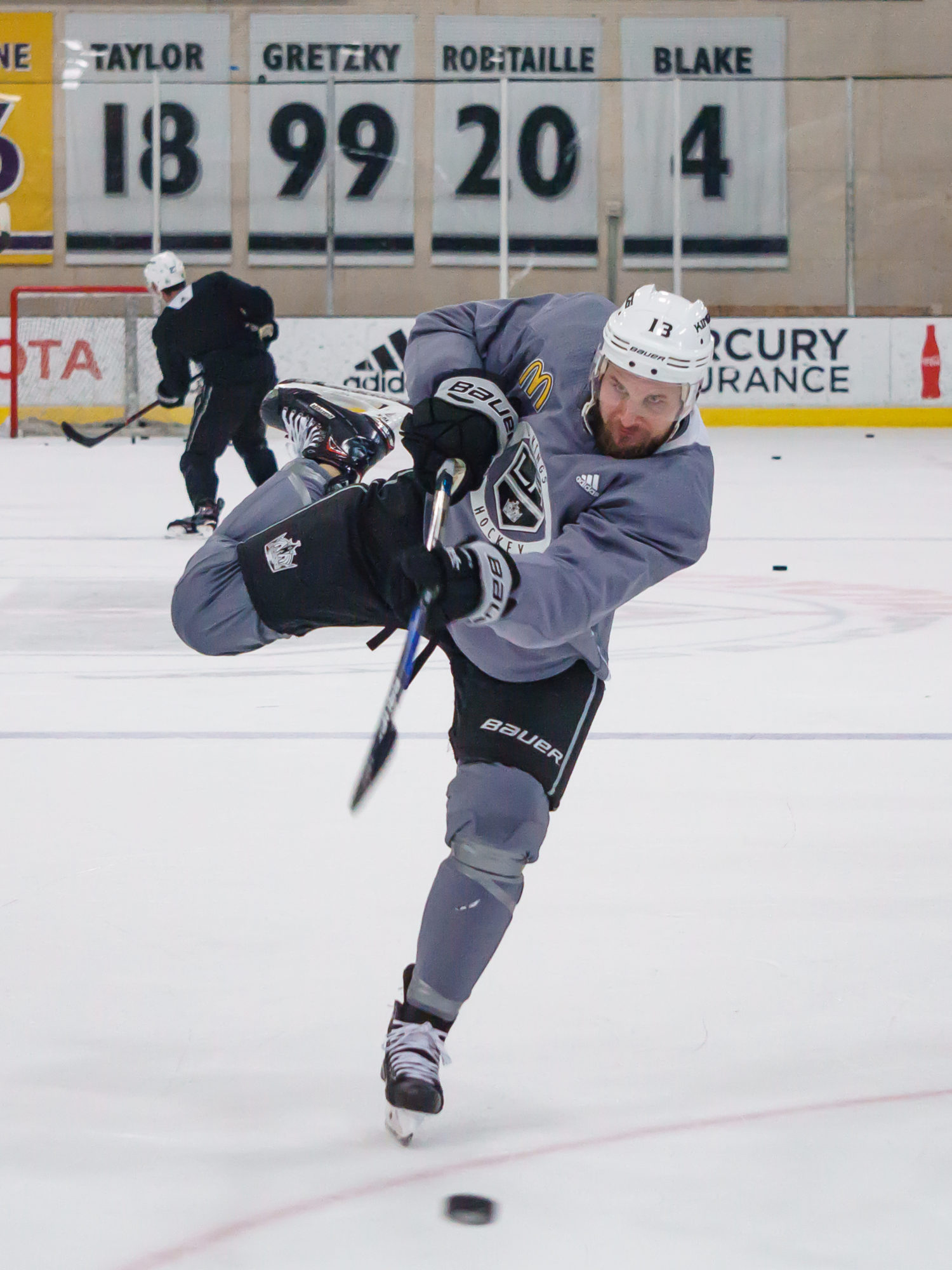