In the stressful and evolving coaching world, Lowry, Ranford soldier on

Beyond the construction of a team culture and the relentless cross-examination he subjected his staff to, there are a number of Dean Lombardi decisions, both tangible and intangible, that continue to affect the Kings. Some will call to attention the shortcomings, such as the transferring of picks and prospects to extend the team’s championship window, but beyond the Stanley Cups and the decisions that followed, there were also a handful of gifts. Some of those prizes were smaller, such as the acquisition of goalie Jack Campbell for defensive prospect Nick Ebert. But for a much larger example that continues to bear fruit, Bill Ranford, hired as part of the first coaching staff Lombardi put together in 2006, continues to work wonders with club goaltenders.

And on Tuesday, after Willie Desjardins’ first morning skate, some 12 years after his hiring, there was Ranford, working with Gabe Vilardi, Michael Amadio and Paul LaDue on their skill development and goalie Peter Budaj on his technique with the familiar shovel at the ready to scoop up excess snow around the net. It could have been any number of game day mornings from the past decade.

But this is a very difficult week for Kings coaches, who are primarily focused on winning tonight’s game against Anaheim (7:30 p.m. / FOX Sports West / FOX Sports app / LA Kings Audio Network) and getting off on the right foot alongside Willie Desjardins yet are still affected by the dismissal of John Stevens and Don Nachbaur.

“I think the hardest thing about it all is you don’t have that time,” said Dave Lowry, who was excited to work with Willie Desjardins but visibly affected by the absence of two friends with whom he shared the trenches with. “You find out the news and we have to get ready for another game. This game doesn’t allow you that time. The news was never going to be easy. You spend a lot of hours together, you spend a lot of time not only at home but on the road and then you get the news that it’s over. They’re both great people. Johnny was an unbelievable guy to work with. He’d give you responsibilities, he taught us a lot about preparation and working it.”

Lowry, a former Calgary Flames assistant who coached the WHL’s Calgary Hitmen and Victoria Royals in addition to playing in 1,084 NHL games, will continue to coach the Kings’ penalty kill, which led the league last year, and focus on the club’s defense. Marco Sturm will focus primarily on the forwards and the team’s attack, but won’t arrive in Los Angeles until the conclusion of the Deutschland Cup this weekend. In the interim, Ranford will take on some extra duties with the forwards and will leave his eye-in-the-sky perch for a spot on the bench against Anaheim, Minnesota and Calgary.

“You see things happen, and sometimes it’s a good reality check for me,” said Ranford, who was 39 and only six years removed from playing when he joined the organization. “I don’t get to do it very often, it’s usually an exhibition and I get a chance to see how quick the game is and how quickly things happen out there. It’s a nice perspective to go down there and you know, I’m just going to be as supportive as I can for the rest of the staff. With the forwards, obviously Willie’s going to be making the line changes and stuff and my job is to be upbeat and if there are mistakes being made up there, just try to help the guys out.”

Ranford will still be responsible for tracking scoring chances for and against as well as additional analytics-inclined duty. He’ll also work with players on skill reinforcement after practice and in video scouting and game preparation. “It’s my goal to make sure the guys that aren’t playing are getting the work that they need and then any guys that are rehabbing, coming back off of injuries, it’s my job to get them ready to play,” he said.,

That’s a tremendous array of responsibility for a figure who deserves his own section in the archives of LA Kings history. Whether he’s a “netminding guru,” a “goalie whisperer,” or just, you know, jeez, the guy who nearly turned 34-year-old Peter Budaj into an All-Star, the 1990 Conn Smythe Trophy winner has helped to solidify the goaltending position for an organization whose history at that position prior to his arrival was a bleak and empty void, save for Rogie Vachon and several others with stretches of strong play like Kelly Hrudey and Felix Potvin.

“I’m very appreciative of both Dean and Rob for giving me this opportunity, I take a lot of pride in what I do. I think I’ve got the work ethic and the drive that’s probably kept me around longer than most guys, but it still doesn’t make it easier when you see two of your good friends move on,” he said.

But despite a track record that reflects both team and individual player success, Ranford does not harbor any top-secret desires to be a head coach.

“I don’t think I have that – I like what I do,” he said. “I like the fact that as an ex-player, I can relate to our guys, I can be somebody that they can talk to. It’s a special relationship that you can have and I can still go about working with the goalies and in the last three years, there’s been a lot more responsibility put on me as far as more of an assistant coach role. But, head coach? I don’t know, my wife bugs me about it all the time, but there’s no real desire for me to do that. It’s a whole other level and you’d have to work your way up, you’d have to start in the lower leagues and learn, there’s a lot to it. It’s not an easy job, there’s not only systems, but matchups and understanding that aspect of things. I watch, and I understand it, but it’s a whole new ballgame when you’ve got to be the guy.”

Anecdotally, there was one conversation I’ll always remember with Colin Fraser from some five years ago. Fraser was a lively player in the dressing room and well-liked by his teammates, and because I saw him as a natural leader with a keen, intelligent eye for the way the game was played, I asked him if he wanted to be a head coach when his playing days were done. He didn’t, because he hated video sessions.

“The ironic thing is that when Mark Morris got let go, a bunch of our guys that had gone through the minors with me asked, ‘are you going to apply for the head coach job in Manchester,’ and I said ‘no, not a chance,’” Ranford said. “Maybe there is something there, but at this point, I really enjoy what I do and I think I know I’ve still got lots to learn and maybe my longevity has something to do with that. I’m constantly looking at ways to better myself.”

And the Kings are better for it.

Bill Ranford, on moving quickly from this week’s changes into a home game:
Willie was awesome, he came in and said, ‘you know what, John’s a great coach,’ and that’s the first thing he said to us. We already knew that, but he said that he’s gone through this himself and it’s not fun. It’s not fun for him to be coming into the situation, when two good people have been let go, but on the other side, he’s really excited about the new challenge for him. We’ve got to make sure we’re bringing that same energy. It’s a quick turnaround, but the bottom line is we’ve got to get back into this race and the only way you’re going to do that is to win hockey games.

Dave Lowry, on his first conversations with Willie and getting ready for a game with a new staff:
Like I said, there’s not a lot of time. You get the news and you’re meeting with Willie real quick. A lot of the meeting are about how we play, style of play, personnel and tendencies and you try to bring him up to speed as quick as you can in as short a period of time as you can. 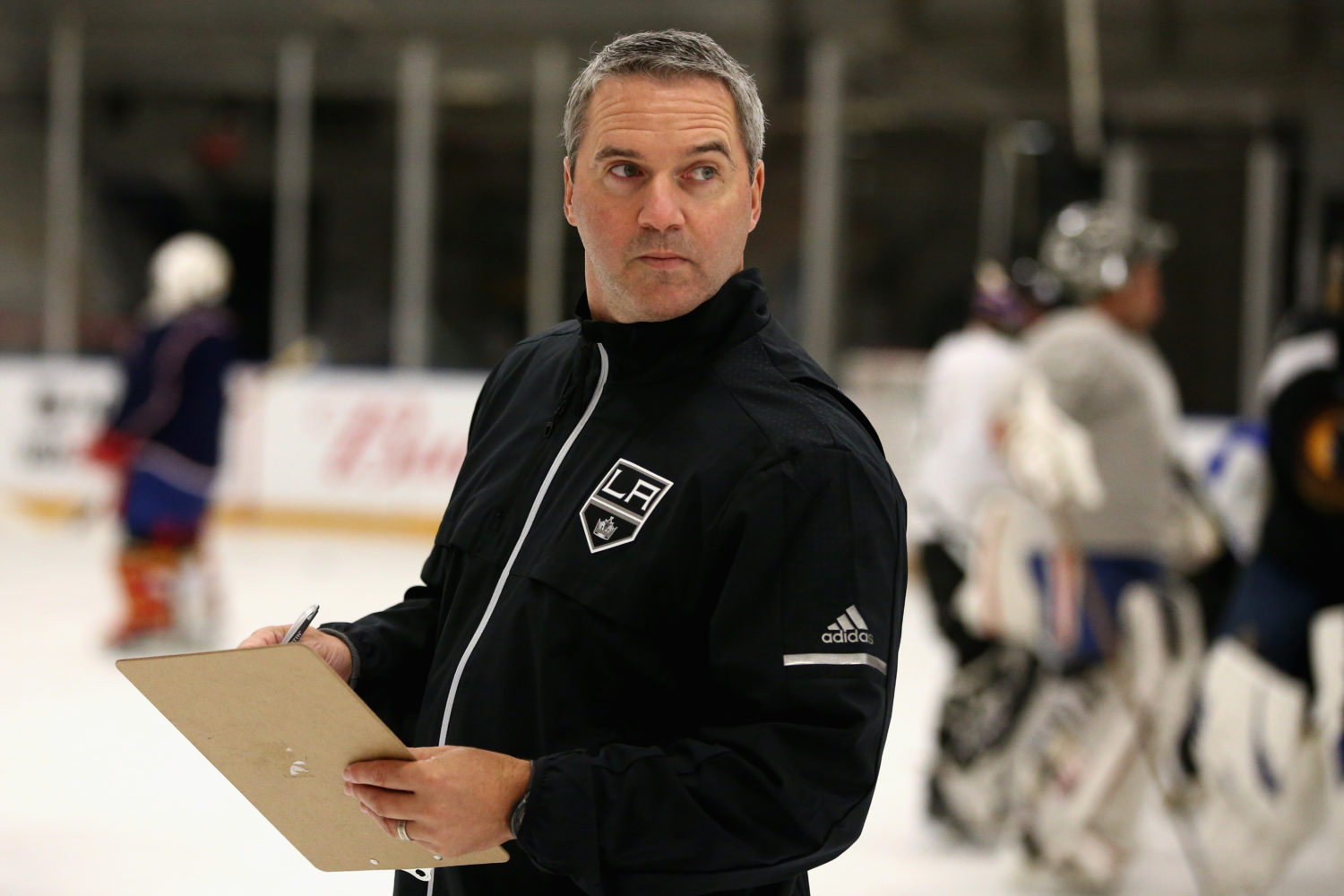