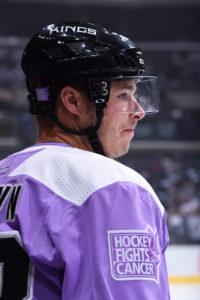 The LA Kings’ annual Hockey Fights Cancer Night, presented by Amgen’s Breakaway from Cancer, takes place on Saturday, Novemeber 3 at STAPLES Center as the Kings host the Columbus Blue Jackets beginning at 7:30 p.m. Hockey Fights Cancer™ is a league-wide initiative that was founded by the NHL and NHL Players’ Association in 1998 to raise funds for all those impacted by cancer.

By purchasing a ticket through the Hockey Fights Cancer Ticket Pack, you’ll receive a KingsFCancer t-shirt, a ticket to the game and a portion of your ticket purchase will be donated towards Amgen’s Breakaway from Cancer.

Goal Donations
The Kings will donate $500 for every home goal scored during the month of October to Amgen’s Breakaway from Cancer, for a total of $4,500

Lavender Warm-up Jerseys and Gear
Players will wear lavender warm-up jerseys and don lavender tape on their sticks
Fans can bid exclusively on these items through the Kings game-night mobile auction, which goes live on the day of the game
Kings players, coaches, staff and broadcasters will wear lavender, the official color of the NHL’s Hockey Fights Cancer initiative in support

The Kings will recognize Sergio Ramirez, who has been in remission since 2013 after receiving an Amgen Immune Therapy Treatment for his Leukemia, as the Amgen Breakaway from Cancer Champion

With the holidays just around the corner, once again, the LA Kings will be teaming up with KROQ to host five Food Drives, presented by Blue Shield of California, to benefit Friends & Helpers. Friends & Helpers helps provide support and education for domestic abuse victims.

All items donated are delivered immediately following collection to the families that Friends & Helpers serve.

In exchange for each donation, you will receive a raffle ticket for a chance to win an Kings player signed puck and a pair of tickets to KROQ’s Almost Acoustic Christmas!

One food item = one raffle ticket, so the more you bring, the better your chances will be! Suggested food items to donate include, but are not limited to:
Pasta
Peanut butter and jelly
Granola bars
Soups
Tuna
Pancake mix
Syrup
Canned fruits and vegetables
Rice
Beans

Collection sites will be located at all major entrances starting two hours prior to the game start and ending at puck drop.

Friends & Helpers, along with the Kings Care Foundation, thank you for your support and generocity!