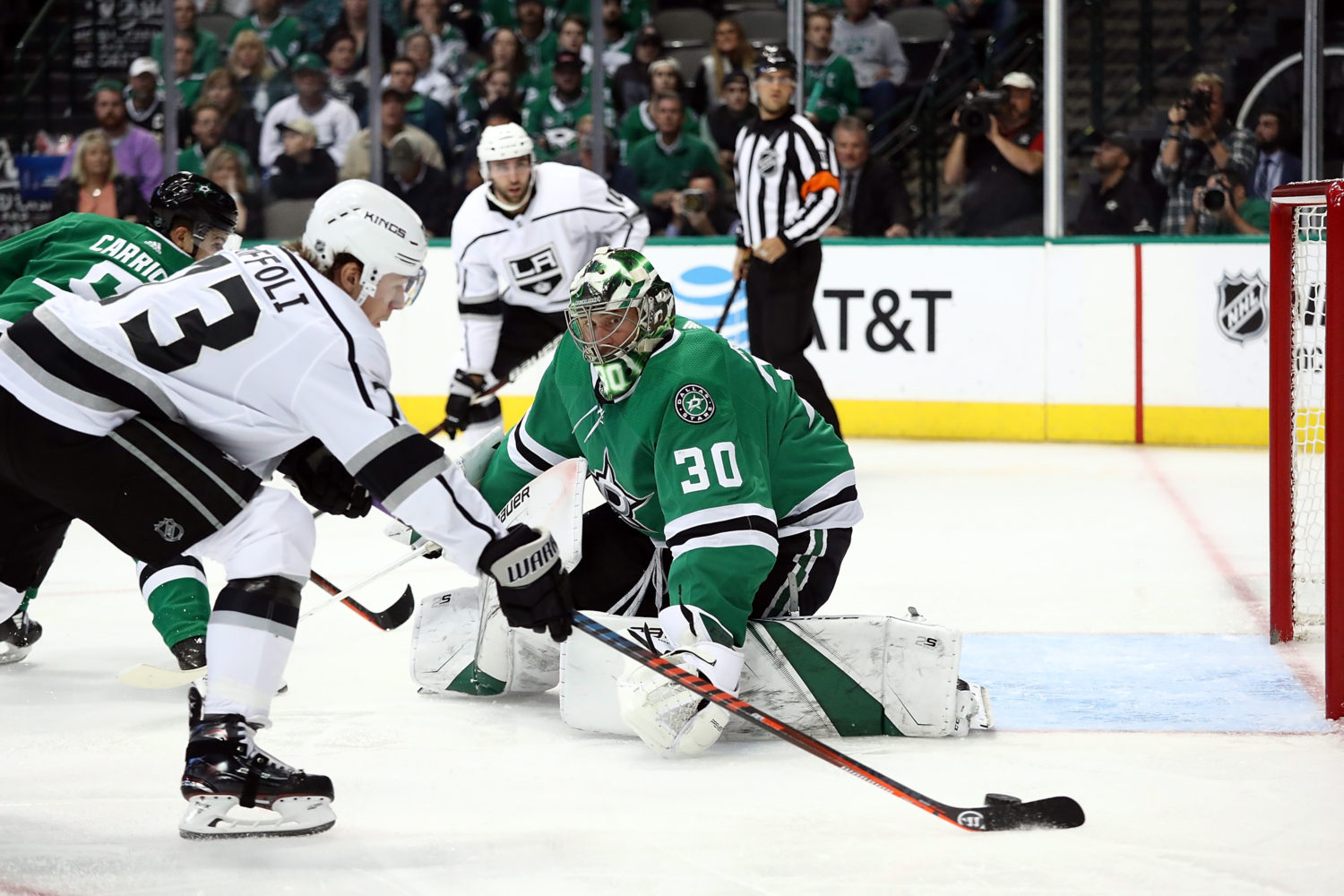 John Stevens, on the team’s solid five-on-five play, counterbalanced with having to chase the game:
I think there’s a lot of good things that we did five-on-five tonight, but I think there’s a lot of detail in our game that we need to be a whole lot better at. Those O-zone penalties are killing us right now. They’ve got a great power play right now, best in the league. Don’t want to give them opportunities getting on the power play. A lot of detail that comes back to bite you. Shift length at times, getting a puck deep can make a huge difference on a game on the road here. We did some good things tonight, but we need a lot more.

Stevens, on Sean Walker’s ability to come in and play to his strengths:
Very effective. I thought he was a very effective player for us. Looked really confident and comfortable out there. I think Dion really helps him because he talks to him lots. A real good veteran presence, but I thought he came in and made an impact. Really impressed with what he’s able to do, coming into this environment against a team that forechecks really hard, and I thought he was really effective. [Reporter: He looked right in place there, he really did.] Yeah, did he ever. I mean, jeez, he looked really comfortable with the puck, really comfortable going back for pucks, really comfortable defending. Made a great play on the goal. Like I said, you want the kid to come in and make an impact, he made an impact.

Stevens, on Adrian Kempe’s penalties:
The first one, I’m not sure – at least he’s in the battle, he’s around the puck. The other one, it looked like he was trying to get position on the guy, but when those penalties are being called against you, you need detail in what you’re doing. One more step, one more stride the way he skates, get on top of people. Had a little better position, especially that deep, far away from your net. There’s no need for it. Again, those are big momentum swings in a hockey game, especially in the offensive zone when you get some pressure going on there. They’re not helping your cause to win hockey games.

Anze Kopitar, on Carter’s disallowed goal:
… I didn’t get a full-blown explanation, but by the looks of it, Carts hit it and it hit his hand.

Kopitar, on the team’s level of frustration right now:
Well, first you want to win games and every time you don’t the frustration level builds a little bit. But we can’t beat up ourselves too much. I thought this was a step in the right direction, but we can’t just get satisfied with being close. We’ve got to obviously take the next step and build on some good things that were happening tonight and just get a lot more from each and every one of us and we’re going to start winning games.

Kopitar, on if it felt like the team got back to their game tonight:
I thought we were playing in the offensive zone a lot more than in the previous games. I thought we moved the puck better. But, like I said, there’s still breakdowns that happened and we’ve got to correct those.

Kopitar, on the level of concern regarding the number of goals allowed in the past five games:
That goes back to the detail part of the game really. It’s breakdown coverage, getting scored on on the penalty kill. You know, I’m not concerned getting scored on, I’m a little bit more concerned about just our game in general right now. But like I said, we’re on the right path with correcting things, but we’ve got to do it. Obviously we can’t wait. Time maybe still is on our side, but it’s not going to be for much longer.

Kopitar, on the line between beating themselves up and the recognizing the desperation of current situation:
A very fine line.

Kopitar, on his individual game right now:
I guess getting three goals in eight games is not too shabby, but it’s the other part that’s missing right now so I’ll fix that.

Jeff Carter, on his disallowed goal late in the third:
I didn’t talk to the ref, but it went off my glove.

Carter, on whether he thought there was room for argument:
No, I mean if you watch the replay it comes off my glove and went in, so that’s no goal.

Carter, on managing frustration:
You lose games, it’s frustrating. So I don’t know, I mean we were better tonight. We created some more. Still a lot more to go.

Carter, on if there is a fine line between recognizing the urgency of the situation and being too self-critical:
Yeah, probably. We’re in a situation. It’s frustrating. But we’re the only ones that can get us out of it. We’re the ones that go on the ice, we’re the ones that play so it’s, like I said, individually it’s frustrating because our game’s aren’t where they need to be. We were better tonight, but we still have a ways to go and when you’re hard on yourself it takes a lot of energy out of yourself.

Sean Walker, on his NHL debut:
It was amazing. It was like you said, we wanted to get the win, but for my first NHL game I was just soaking it all in and enjoying myself every minute.

Walker, on whether tonight was an indication of the type of game that he wanted to play:
I think everybody knows that i’m trying to get pucks to the net and get the forwards the puck and that’s what I did and stuck with the game plan.

Walker, on what the vibe was before the game:
Everybody is very positive, looking to bounce back right now, and I’m hoping to help them as much as I can.

Walker, on looking forward to the next game:
Obviously I want to be in the lineup and help as much as I can. I think there’s some details that we can work on with everybody, including myself, so hopefully we’ll just go from there.

–With the loss, Los Angeles fell to 88-106-41 all-time against the Dallas franchise, a record that includes a road mark of 37-62-19. The Stars have points in seven of the last eight games against the Kings, going 6-1-1. These teams have two games remaining, January 17 at American Airlines Center and February 28 at Staples Center.

–The Kings have not led at any point during their five-game losing streak. Their last lead was at the end of the 3-0 win at Montreal on October 11.

–In his NHL debut, Sean Walker recorded one assist, an even rating, two shots on goal and six shot attempts in 13:05 of ice time.