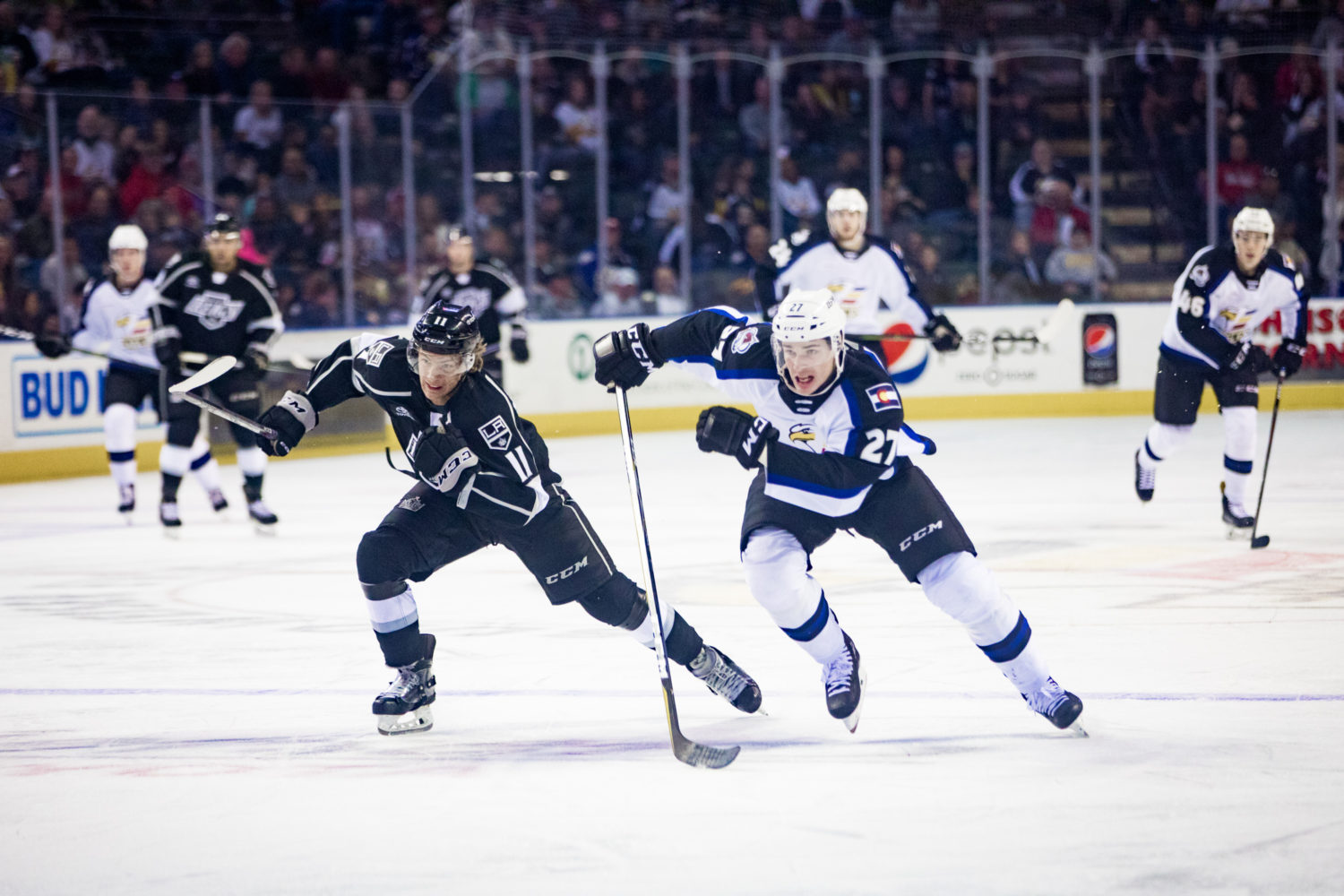 A spirited, third-period comeback from the Ontario Reign came up just short on Saturday evening, as they fell 5-3 to the Colorado Eagles, capping off a back-to-back set in Colorado. Ontario dropped both games on the weekend and fell to 1-3-2-1 on the season.

After it fell behind 2-0 through 40 minutes, Ontario surged back with a purpose in the third period, tying the game at two with a pair of tallies from defenseman Sean Walker. The Eagles then re-took a two-goal advantage before Ontario forward Brad Morrison pulled one back with 1:25 left in regulation to give the visitors a bit of hope, however Colorado capped off the scoring with an empty net tally with 64 seconds left in the game.

The third period saw Ontario score three goals and hit two posts – Walker led the way with three points on the evening, while Morrison tallied his second goal of the season. Morrison had a golden opportunity earlier in the third to make his mark, with Ontario trailing 3-2, but his breakaway effort rang off the crossbar and out, one of several narrow misses for the Reign in the third. Forward Matt Moulson tallied an assist on Walker’s second goal as he extended his scoring streak to six games, one game shy of the longest active streak in the AHL this season. Goaltender Cal Petersen – who made several strong saves, especially in the first 40 minutes to keep the Reign in the game – finished with a season-high 39 saves in defeat.

After a fairly even first, Colorado scored the lone goal of the period as J-C Beaudin collected a rebound and beat Petersen from close range, after the Reign netminder turned aside the first and second attempts. The Eagles would double their advantage early in the second as defenseman Ty Lewis scored a power-play goal, a wrist shot from the left side that went through traffic and in for his first career AHL goal.

Walker brought the Reign back in the third, first crashing the net to finish off a scrum in front 3:39 into the third, with forwards Kyle Bauman and Jamie Devane picking up the assists on the play. Walker would strike again less than five minutes later as his shot from the left side hit off of a Colorado player in front and kicked in as the second-year blueliner collected his third tally of the season.

The lead would be short lived, however, as Kout replenished Colorado’s lead 46 seconds after Walker tied the game. Kosmachuk capitalized off of an Ontario defensive zone turnover, taking a feed from forward A.J. Greer to put the Eagles up 4-2 on a play in which Petersen had no chance.

With Petersen pulled for the extra attacker, Ontario controlled the puck for an extended period in the attacking zone, culminating in a Morrison goal from the right-hand circle, his second of the season. Kosmachuk finished the scoring with an empty-net tally to seal the deal with 64 seconds left in the game.

Is there encouragement on your end with the fight the team showed and the chances they created in the third?

I am very proud of these guys. They played hard, they still CJ up for one another and they competed until the final buzzer. We cleaned up some things defensively especially limiting the number of odd man situations. The guys deserved a least a point.

Sean Walker stepped up with a pair of goals to tie the game at 2, what did you see from his game tonight?

Effortless skater and was a factor in our end, as well as the opposition end. Becoming a dominant player in this league. Love what Walks brings to the table for our club

In a few Reign losses this season, it feels like the team deserved more than the outcome gave them. Does that get frustrating for you or is it all a part of the process.

It’s only frustrating if you let it become frustrating. We are a young team that is trying to get a little bit better every day, and we are. I like our team they are fun to work with

– Defenseman Chaz Reddekopp made his season debut for Ontario after he was a healthy scratch in the team’s first six contests. Defenseman Daniel Brickley was the defenseman out tonight for the Reign.
Stothers on Reddekopp’s first game, and the decision to make the roster move for today’s game – “Chaz needed a chance to get his first game of the year. He played well, a very simple steady game.”
– Defenseman Austin Strand scored his first career professional goal tonight with the Manchester Monarchs (defenseman Stepan Falkovsky also scored for Manchester in the game). Video of the goal itself (stick taps to Jon Edwards with the ADK Thunder for helping with ECHLTV) plus his thoughts after the game, via Monarchs Game Day.

One of the top @LAKings prospects, Austin Strand, talks about netting his first goal of the season here in Manchester. pic.twitter.com/wnDcLTHojQ

– The Reign are off tomorrow for a travel day and are back on the ice at Toyota Sports Center on Monday. The Reign have a full week of practice and just one game this week, coming back in Ontario against the Tucson Roadrunners on Friday at 7 PM. 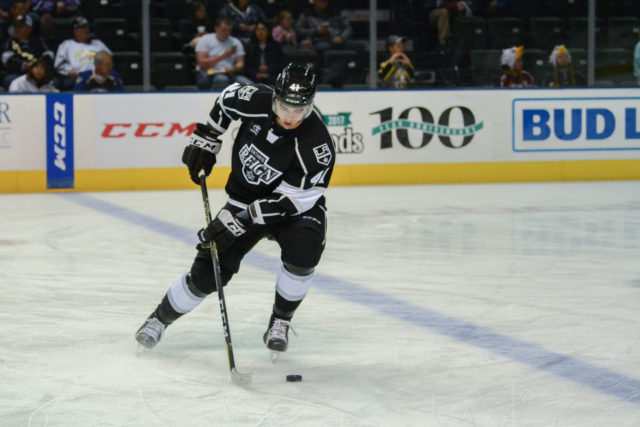 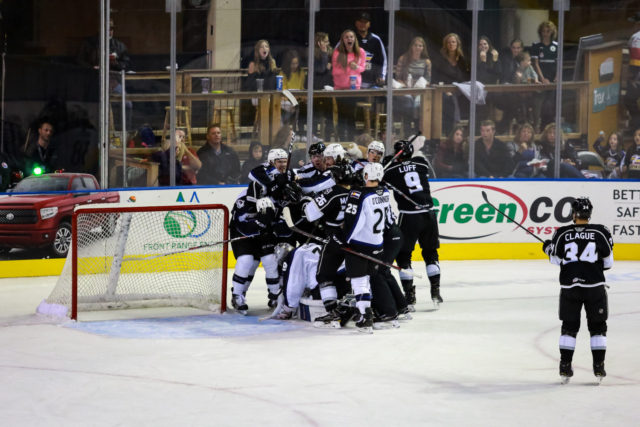 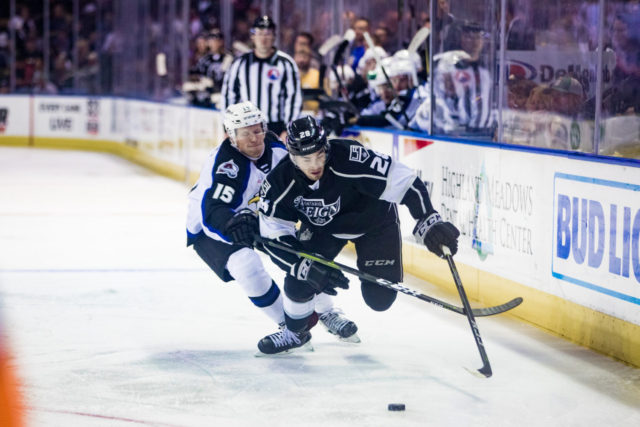