INSIDERS. A fine Friday afternoon to you. Let’s get down to brass tacks. The LA Kings took the ice shortly after 11:00 a.m. and were color coded as such:

–In housekeeping matters, Dustin Brown (broken finger) took some light contact and was able to jostle a bit while screening goaltenders and taking part in several of the drills in a battle-heavy practice. He wore his red no-contact jersey, but the team is happy with his progress, and John Stevens noted Brown skated well and showed progress in handling pucks and shooting them. He’s coming along, even if the contact isn’t “full-blown yet.”

“Guys are still conscious about him,” Stevens said. “But, he’s a lot more involved each day than he was. The first time out there with the group he was just kind of staying out of the way of the front of the net there, but now he’s getting a little more integrated in those situations, and I would like to see that continue provided that he’s medically OK to do that.”

–Anze Kopitar began feeling ill overnight prior to the Islanders game and progressively felt worse during the day on Thursday, eventually developing a fever. He didn’t play, marking the 12th game he’s missed over the last seven-plus seasons.

“I guess I’ve been pretty durable throughout my career, too,” he said. “If there’s something I can play through, I can definitely play through it. I wanted last night. I waited until the very last possible minute to see what’s up or not, but it just kept getting worse and worse. I don’t think I would’ve been much help on the ice.”

Confined to the couch, he watched the first period before falling asleep at around 8:30 p.m. and waking up to check the score early the next morning. Yikes! He returned to practice Friday and felt better than he had one day prior. “By the looks of it now – because I feel pretty good now – it must’ve been some 24-hour thingy,” he said.

Though it passed quickly, Kopitar was skeptical to think he had a case of food poisoning because his house guest, Jaret Anderson-Dolan, was with him the previous afternoon, and they ate the same food, he said.

Kopitar expects to play in Saturday’s matinee against Buffalo (12:30 p.m. / FOX Sports West / FOX Sports app / LA Kings Audio Network), where he’ll be among the figures counted upon to right the ship after three consecutive losses by an aggregate count of 16-4. Even though the team clearly hasn’t figured things out early in the season, Kopitar isn’t ready to wave the white flag.

“I think first and foremost, it’s still very early in the season. Certainly no excuse for our play right now, but we’re 2-4-1, so if you go on a little streak here, everything’s going to be forgotten and the standings are going to look a lot nicer,” he said. “But in saying that, we all realize that obviously we’ve got to play a lot better. Giving up seven goals is certainly not going to get it done. We’ve just got to get it back to really being solid defensively in our zone and then expand from there. Sometimes you get caught just maybe thinking about offense too much, and then you forget about what brings success to you. Again, get back to our foundation, as we call it. Go back into our D-zone and expand from there.”

–Given the context of the early-season run of play, it’s not surprising to hear some emotion-driven responses after a 7-2 drubbing.

One of those responses came from John Stevens, who spoke on behalf of a lot of people at Staples Center on Thursday night when he said that the team “just stopped playing” after the two-on-zero shorthanded goal that put the Islanders back up by two goals in the third period.

But that’s not an observation that will necessarily sit well with hyper-competitive athletes, even if Thursday’s game snowballed into a third period debacle in which the Islanders scored four unanswered goals to turn a tight game into a rout. Drew Doughty bristled at such a notion.

The question was posed to Stevens as to whether he was trying to “light a fire” under the group.

“I think when you sit back and you look at what happened, we had all kinds of momentum in the game. Guys were excited about what happened,” he said. “It just looked like the energy and emotion, there was a heavy swing on that goal there. The big [Jeff Carter] goal, we had lots of time on the clock, so it was probably more of the emotional let down, which is something we’ve got to do a better job of. I don’t ever question the guys’ ability or the willingness to go out there and compete, I just thought emotionally that had a big effect on our team.”

Whether or not there was a post-game, heat-of-battle emotional resonance that influenced his choice of words Thursday night, Stevens articulated his point and acknowledged that he thought the team, once it fell behind 4-2, began to freewheel and take matters into their own hands.

“When we got down, guys were just trying to just, ‘OK, I’m going to get the puck and I’m going to go and make something happen, which on one point is admirable, but the team game’s going to rule the day,” Stevens said. “The league is too good and the game is too hard. You want guys to make a difference, and Drew’s done it his whole life where he can have an influence on a game. So has Kopi. Lots of these guys have. The whole idea is to play a team game that’s going to allow you to have success, and play that game extremely hard for each other, and I just thought there were times last night, especially early on, I thought we had really established our game that we wanted to establish, but again, frustration set in and with the emotional swing that we went through, I just through they took the game over on us there.”

Doughty downplayed a question regarding whether Los Angeles was trying to do too much but did note the breakdown of schemes and systems, which he acknowledged could be driven by the frustration over the team’s early season struggles.

“I think we’re trying to play the game, and we’re obviously not creating any offense, and when the offense isn’t working you’re going to try to make some more plays that maybe aren’t there that you think are there,” he said. “You’re going to try to do some different things if you’re not scoring goals. Sometimes you get out of your comfort zone and you try to make some plays that you usually wouldn’t try to make. It’s frustrating not scoring. You can say ‘just keep sticking to the game plan,’ but sometimes when you’re not scoring or things aren’t going well, it’s not easy to do. We do have to stick to the game plan. I don’t know. We got off page, I guess, a little bit. But we could’ve easily won that game the other night. I know it’s 7-2, but we could’ve won that game. As much as people might not think we could’ve, we could’ve.”

A significant issue in Thursday’s loss was the team’s inability to win puck and net-front battles, particularly when trying to generate second opportunities around Robin Lehner. The lack of detail and one-on-one competing was reflective in energy-type players like Leo Komarov, Casey Cizikas and Scott Mayfield posting standout nights against their L.A. counterparts.

At practice on Friday, there were battle components sprinkled through a number of net-front drills.

“Bigger commitment to checking, get the puck back, and a bigger fight on the puck offensively,” Stevens said of the practice’s thrust. “We had some good zone time last night, but I thought we got boxed out too easily offensively. That doesn’t allow you to extend zone time and makes it too easy on the goalie.”

–Stevens, on Sheldon Rempal’s NHL debut: “I thought he came up and played with confidence where he wanted the puck, he wanted to make things happen, he wasn’t afraid to demand the puck and get open, hang on to it, try to make plays. It was impressive, that amount of change in him between training camp and now, but I think he’s just relaxed and playing and has got a sense for the league. That’s what you want to see in a young player. You want to see him trying to be the player here that he was and the reason he got called up to begin with.”

Thompson and Elie as extras

Julianna Iafallo gets her first career goal in her hometown! pic.twitter.com/cF1irfyhCn

Be on the lookout for Iafallo-related stories from the Buffalo News and The Athletic over the coming days. 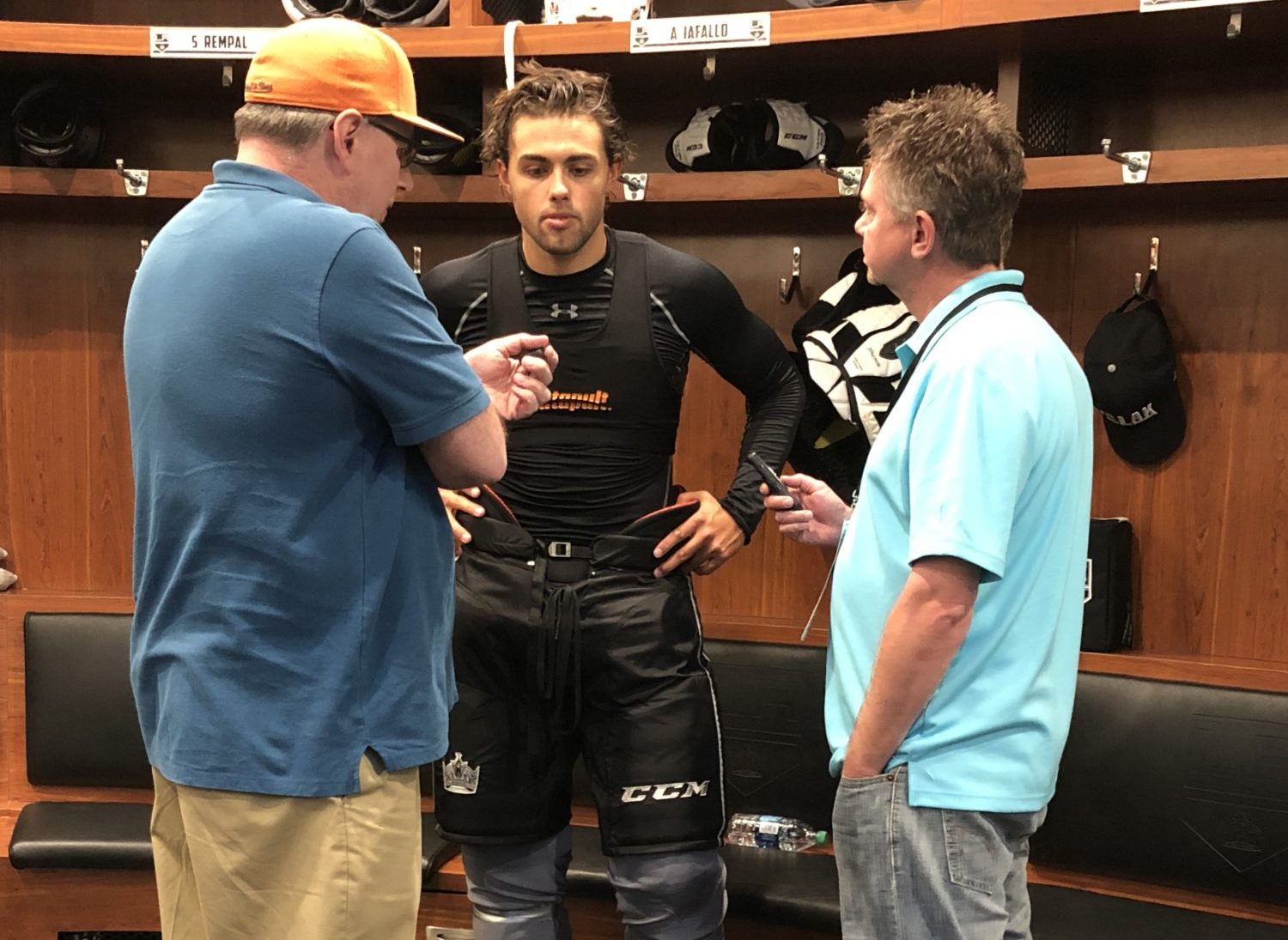