If you’re looking for a scouting report on reigning Calder Trophy winner Matthew Barzal, you have several options. Nate Thompson and Dion Phaneuf faced Barzal and the New York Islanders twice as members of the Ottawa Senators last season, as did many of the players who spent the entire 2017-18 season in Los Angeles.

Or, you could turn to Barzal’s former Western Hockey League foes, like, say, Austin Wagner and Jaret Anderson-Dolan.

Wagner, who is expected to return to the lineup tonight, was matched up against Barzal for nearly the entirety of the 2017 WHL Championship, won by Barzal’s Seattle Thunderbirds in six games over Wagner’s Regina Pats. Being matched up against Barzal isn’t an enviable match-up, one made more difficult by Wagner’s injury that required off-season surgery to repair a torn labrum. “My shoulder, I couldn’t really do much with it,” Wagner said.

In that series, Wagner totaled two goals and three points, while Barzal was named the WHL Playoffs MVP after a postseason in which he totaled seven goals and 25 points in 16 games. (Barzal, defensive prospect Austin Strand and the T-Birds finished in fourth place in the four-team Memorial Cup; Gabe Vilardi played for champion Windsor, while Boko Imama played for third place Saint John.)

Hopping over the boards so regularly against Barzal allowed Wagner to get an appreciation for the skilled forward’s string pulling. Asked what stuck out about Barzal’s play, Wagner responded, “honestly, everything.”

“He sees the ice really well, he’s a smart player, and he’s got great hands and can skate. His shot’s good. He creates a lot of space with his skating, and he’s very good on his edges. We’re going to watch him tonight, but we’re going to watch the other players, too, because there are other good players.”

The abilities to lean on his skates, trust his edges and stop and change direction effortlessly are among the reasons why Barzal ranks fifth in the NHL with 67 assists since the start of last season. The greater Vancouver native turned 21 in May.

“Barzal is a dynamic player,” John Stevens said. “I think I could almost call him unique, the way he plays on his edges and stops and turns and finds open space. I know Tavares isn’t there anymore, but they have a lot of really good players, and they have a lot of depth and a lot of experience.”

Martinez, who skated alongside Anders Lee and at the World Championship this spring, also countered Barzal (and New York’s Anthony Beauvillier, Jordan Eberle, Josh Bailey and Ryan Pulock) in pool play as well as a bronze medal game won by the Americans, 4-1.

“You see highlights, [Barzal] a guy that’s highly skilled, he wants the puck he wants to swing deep with speed, much like Kane does in Chicago, so you’ve just go to play the guy hard,” he said. “He’s going to take you one one-on-one, and he has the skill to beat you, so you’ve got to have an awareness of him when he’s on the ice at all times. Just keep your gaps tight. That makes the defensive job not easy, but easier. … It allows to you to try to absorb that speed when you stay tight to him. He’s a good player, he’s going to make good plays. You’ve just got to treat him like a playmaker, play him tight.” 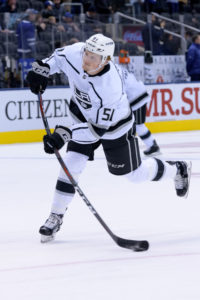 And, hey, if we’re talking skating, it would behoove us to mention Wagner, who has some of the purest unadulterated speed in the NHL. He was a solid fixture through the Kings’ first two games, leading the club with a team-best seven scoring chances in five-on-five play, per Natural Stat Trick’s count.

After a game in Winnipeg in which he was on the ice for two five-on-five shot attempts for and 15 against in 7:16 of ice time, he’s looking to reprise the bursts of speed and north-south play he exhibited against San Jose and Detroit.

“Just do the same thing I did in the first two. Use my speed and skating, and get on the forecheck hard,” Wagner said. “I’m playing with two good players, and we’re hoping to get a win.”

Though his speed will always be his calling card, Wagner’s defensive play was also a part of a wider assemblage of ability that led the Kings to call his name in the fourth round in 2015. He totaled 12 shorthanded goals while with Regina, largely because he was able to generate shorthanded breakaways on the regular. But while that certain style of play may work in junior hockey, he’s still going to have to build towards a level of defensive acumen that will make him additionally viable in a wider array of situations in Los Angeles.

“We like a lot about Wags. He’s a good young kid,” Stevens said. “We put Jaret in the lineup [during the road trip], and just want to continue to see [Austin] use his assets and just continue to learn to be a consistent, sound, defensive player but still create with his speed. He’s going to get opportunities offensively. We know he’s going to use his speed to get in on the forecheck and get behind people, and just want to see him be really sound without the puck [which will] allow us to get some really good minutes out of him and his line, but he gets better every day, and we’re confident he can do that.”

Team-wide, Stevens would like to see a greater commitment to checking fast without the puck as the Kings strive to carve out their own identity in the new season.

“To be honest with you, I think we’re still trying to find that identity as a hockey team here,” Stevens said. “The special teams need to improve, both power play and penalty killing. We always take great pride in keeping the puck out of our net, and part of that process is just not spending as much time in your own zone. I thought the Toronto game, we did establish a lot more zone time, but you get down early in the hockey game, you start chasing the game, you take penalties early, and they score on a power play, now it becomes a big hole that you can’t fight your way out of.”