Waking up with the Kings: October 14 - LA Kings Insider

The power play, it has been said, can help teams win hockey games. In an ugly 5-1 loss to Ottawa on Saturday, it was among the factors to lose the LA Kings a game. Though there were clear and present challenges in a first period in which the team fell behind, 3-0, there were actually several constructive shifts to open the game. Adrian Kempe, one of the Kings’ two most noticeable forwards in a good way along with Jaret Anderson-Dolan, rung the puck off the underside of the crossbar on a rush and, later on the same shift, generated another rush in which he tested Craig Anderson high-glove once again, forcing the Senators goalie into a fairly difficult glove save. Less than three minutes afterwards, the former San Jose connection of Dylan DeMelo and the underrated Chris Tierney connected on an even-strength tally to open the scoring. Ain’t no thing – trailing 1-0 in first periods didn’t keep the Kings out of the playoffs last season. It was the ensuing four minutes of power plays that provided the most impactful stretch of the game. Again, Los Angeles had about 90 seconds of power play time – a continued theme through the first two weeks of the season – instead of the full two minutes because the opening faceoff was lost, and the team wasn’t able to get comfortably set-up and overly active in the remaining time and accounted for three blocked attempts, one missed shot and zero shots on goal amidst three Ottawa clears. There was a heavier in-zone push on the ensuing power play, but again the Senators won the opening faceoff and benefited from a quick clear as the Kings were credited with only one shot on goal – a Jeff Carter wristshot from 43 feet, per the play-by-play log – before Nate Thompson’s 54-foot wrister with only three seconds remaining. Ottawa scored 33 seconds after the power play expired, and added an insurance marker some four and a half minutes later to take a 3-0 lead into the first break. There’s your ballgame. 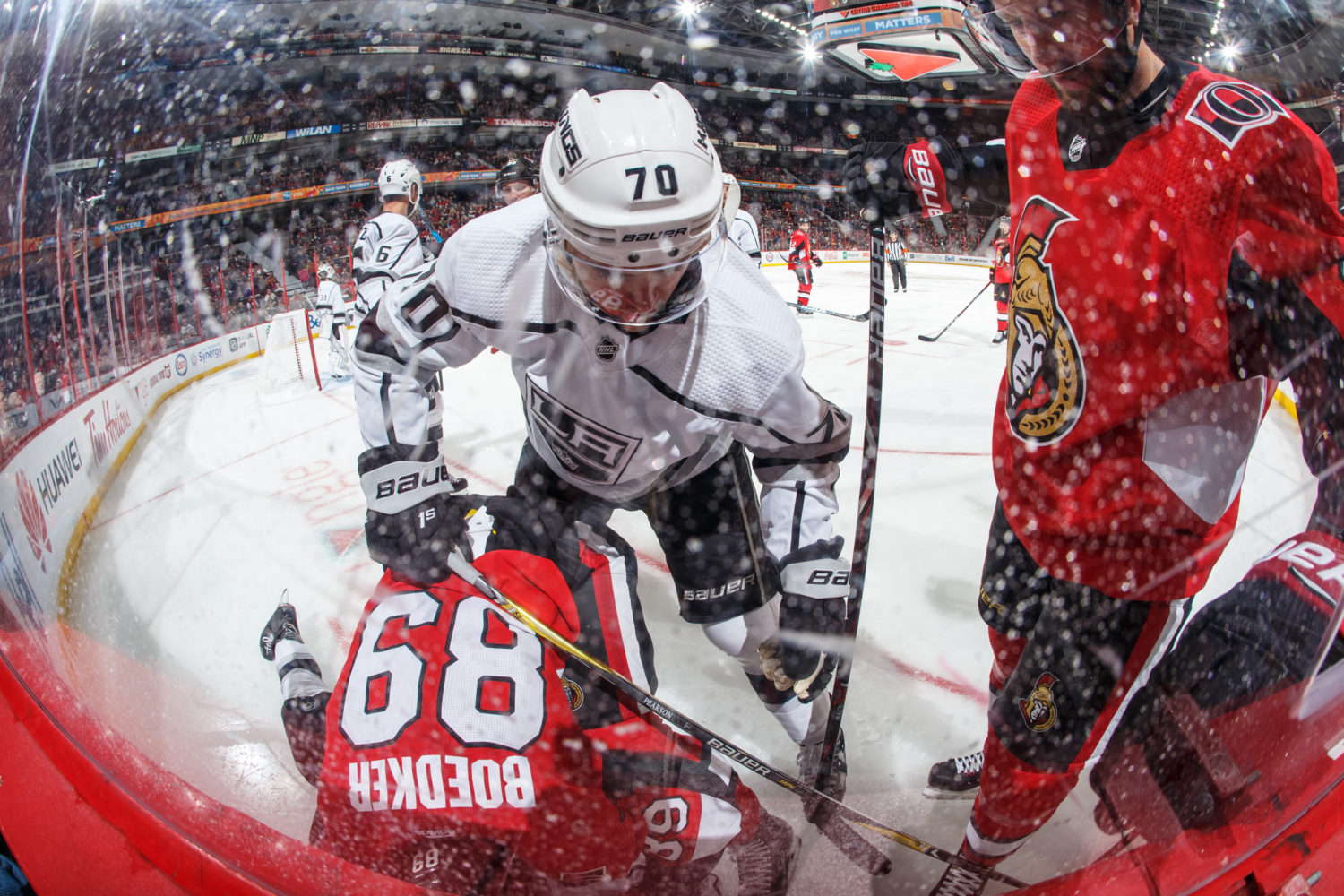 The Senators, through some combination of a small sample size and the dark summonings of the occult, have averaged a robust four goals per game thus far this season. Still, coming off a game in which the Canadiens generated 40 shots but few high-grade chances, it would’ve been encouraging for the Kings to lay down their familiarly stingy control of the center of the ice and heaviness around the perimeter and within a halo of the net. That didn’t happen, and the team was beat in a number of one-on-one battles that led to Ottawa’s success in capitalizing on their chances around the net in the first period. That changed in the second period, but by that point, there’s going to be a concerted, all-out push by the team trailing 3-0 (and eventually 4-0), and the naturally safe play undertaken through the bend-but-don’t-break efforts of the team leading by the wide margin. This was surprising, given the expected advantage Los Angeles had over a team that had six players on injured reserve, one of whom was their leading minutes-eater on defense. The mismatch should have heavily favored the Kings, but there wasn’t any sort of a surplus of top individual performances nor a sturdy team game needed to win against any team in the National Hockey League. John Stevens praised the Anderson-Dolan-Amadio-Carter connection again, and Kempe continued some of his encouraging early season play, but beyond Carter, the Senators’ lineup outplayed virtually the entire Kings lineup on an afternoon Jack Campbell had his first off performance. One game is just one game, but there are some uncertain early returns from certain players in that secondary core, including Tanner Pearson, who contributed in many ways other than scoring last year but experienced a nine-goal drop in production, and has one assist and only eight shots on goal through five games after Saturday’s one-shot performance. 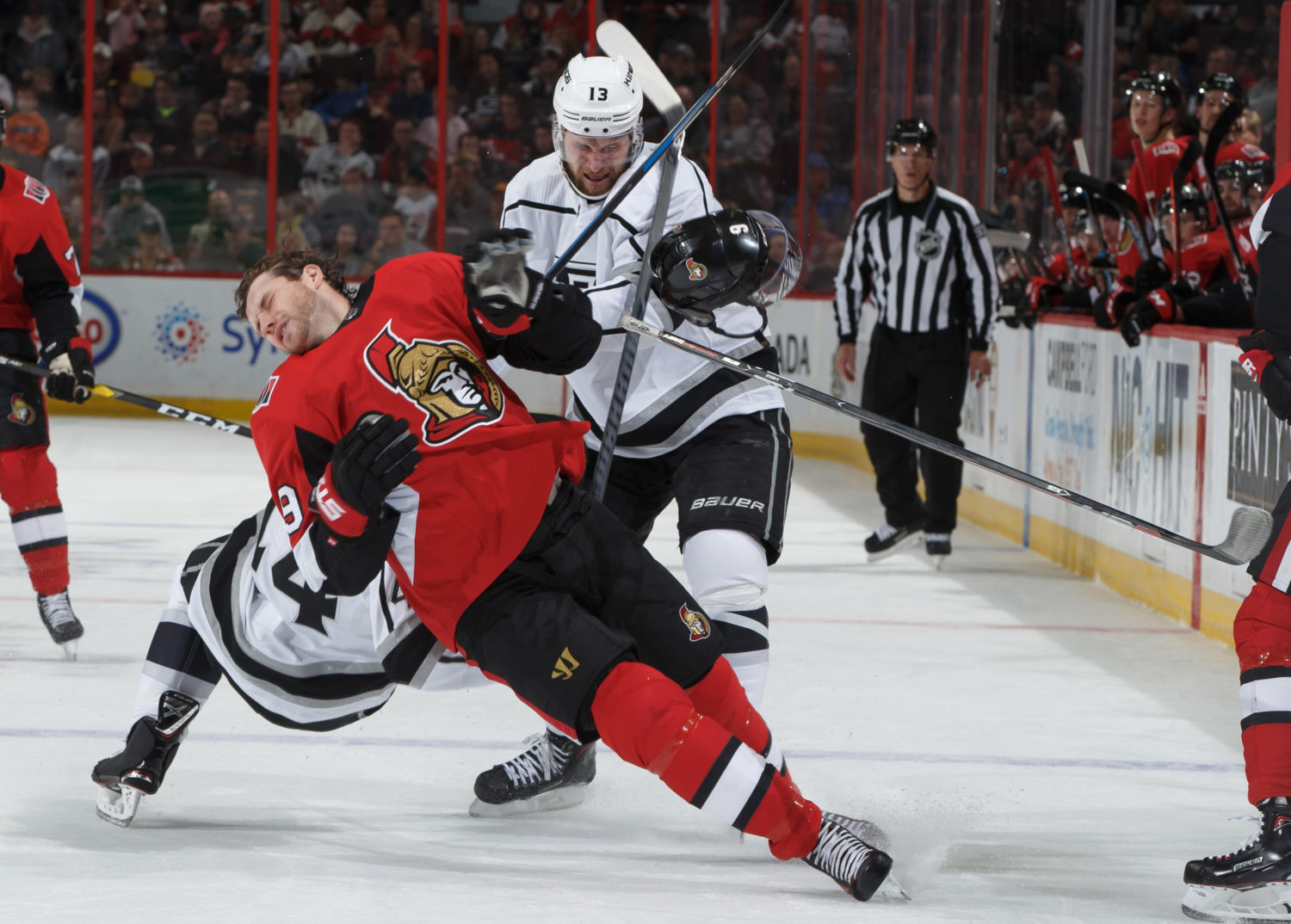 Los Angeles responded well after the rough outing in Winnipeg by etching out their strongest team-wide showing in the young season against Montreal. They’ll look to build off that template that they’d rather not return to too many times on Monday, taking on an offensively gifted Toronto team that came from behind to defeat Washington 4-2 on Saturday and sits atop the NHL with 10 points. It’s somewhat similar to the trappings of the game at the then-Air Canada Centre two years ago, when a very young but oncoming Maple Leafs squad had won three straight, including a resounding Hockey Night in Canada win that Saturday night. After two days off, and facing the Kings on Election Day, they lost 7-0. Of course, any similarities are loosely on the surface, and if the Kings approach Monday’s game with lingering carry-over from their showing on Saturday, they’re more likely to be on the losing end of a 7-0 game. 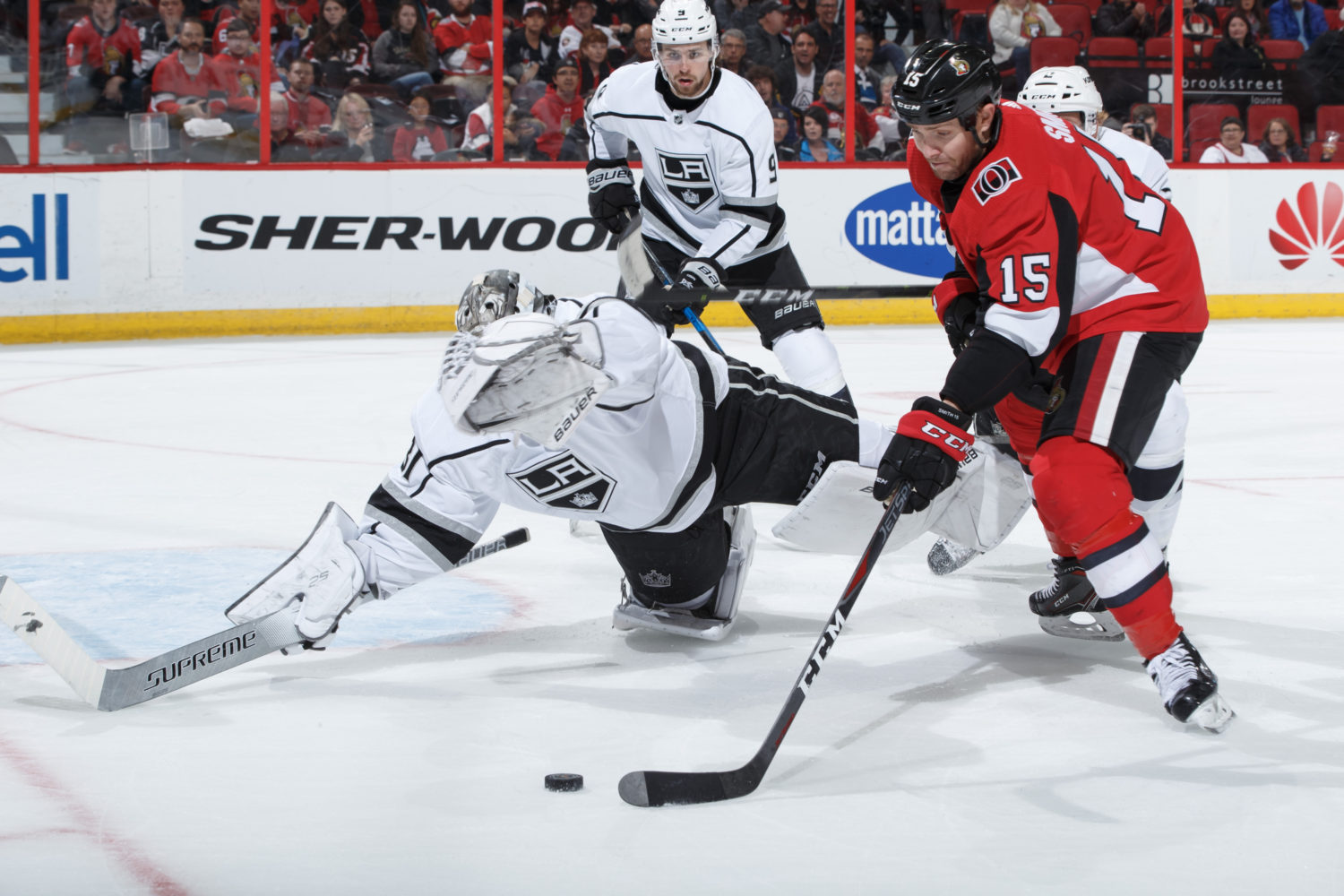