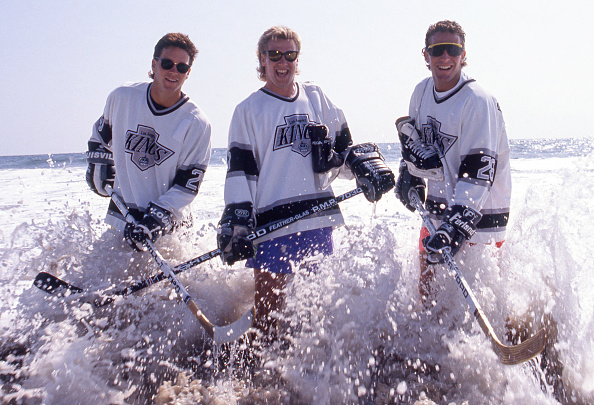 Insiders. A very happy Canadian Thanksgiving to you all. It’s a quiet evening out here in Winnipeg, and before several of us gather to watch some playoff baseball and ::checks the NHL schedule:: highlights of this afternoon’s Bruins-Senators game, here are several videos, audios and digitals of work from around the Kingdom.

–First, in case you missed it, the eve-of-season Black and White feature, Identity:

–From last night, Jesse Cohen, Dave Joseph and Jack Jablonski broke down the 4-2 win over Detroit:

–Hockey historian Mike Commito is now writing for LAKings.com, and he caught up with Luc Robitaille, Bernie Nicholls and Steve Duchesne to learn more about the Kings’ 1989 Venice Beach photoshoot. An excerpt:

And rightfully so, with their skates slung over their shoulders, they certainly didn’t look like your typical beach patrons. When asked about who had the most fun that day, Robitaille, now the President of the Kings, did not hesitate before answering. “Bernie Nicholls, by a mile,” he said.

“No one had more fun at doing any of those things than Bernie. He was splashing people and the photographer with his stick. He was just one of those guys who would do a lot of that stuff just to have fun,” Robitaille added.

–The season opener’s military homecoming was a poignant and emotional moment, and while it’s not internal content and requires a subscription, Josh Cooper (née LAKI) of The Athletic caught up with Major​ Douglass Rauschelbach​ ($), who surprised his four children by reuniting with them on the Staples Center ice just prior to puck drop. This was beautiful: