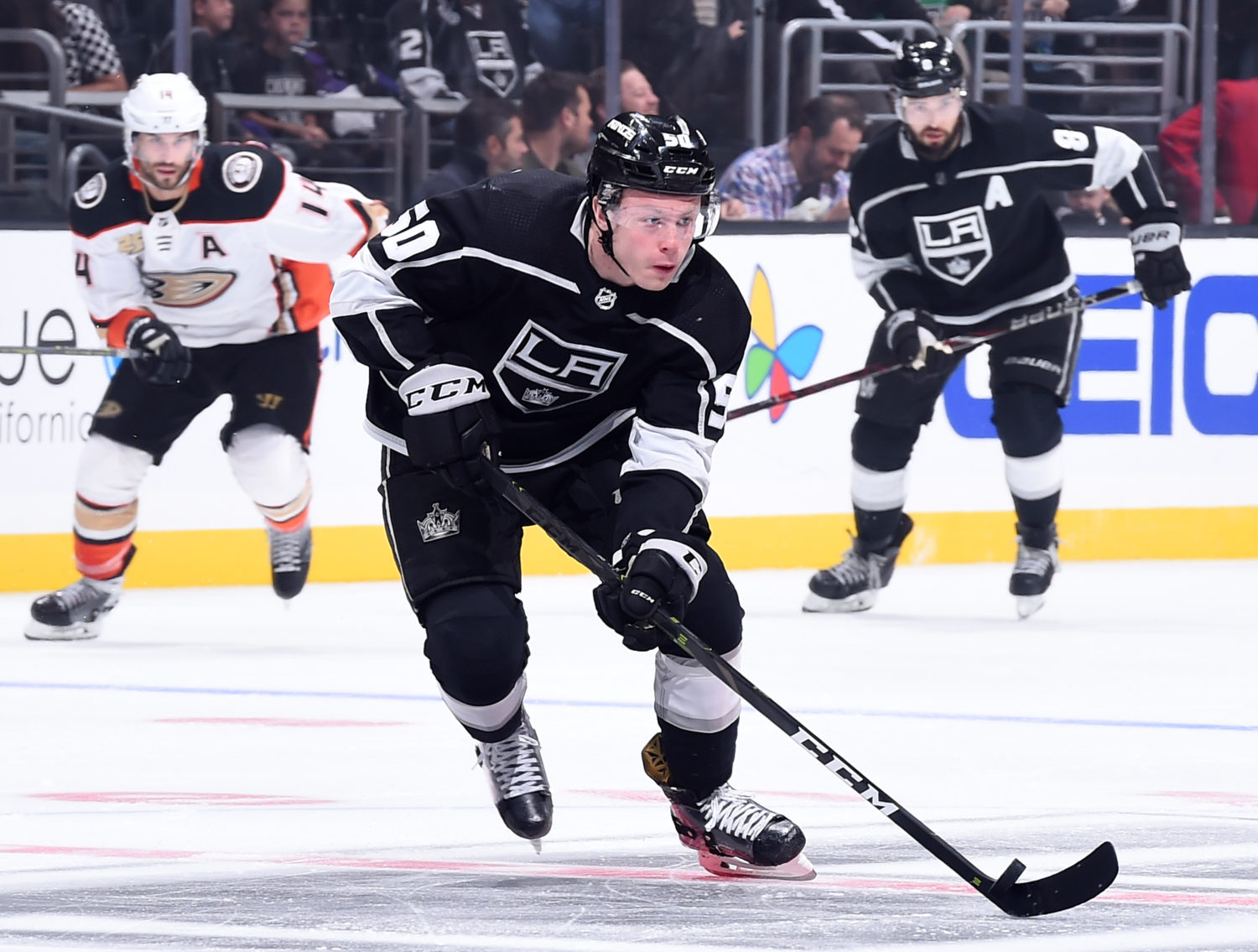 There was news today. Click here if you missed any of the surprises this morning. The Kings took the Toyota Sports Center ice shortly before 10:00 a.m. in advance of the Detroit Red Wings’ lone Staples Center visit this season (7:30 p.m. / FOX Sports West / FOX Sports GO / LA Kings Audio Network).

-Jonathan Quick has been placed on injured reserve, retroactive to October, and Jack Campbell will start tonight/ Because the minimum stay on injured reserve is seven days from the time of the injury, Quick will miss at least the first two games of the upcoming road trip in Winnipeg and Montreal.

Peter Budaj has been officially recalled from AHL-Ontario. Because the Kings did not have enough cap space to simply recall Budaj, they needed to place a player on long-term injured reserve. To maximize the benefits of LTIR – as explained here – they issued a paper transaction as Matt Luff was recalled, Dustin Brown was placed on LTIR, Luff was assigned back to the Reign and Budaj was recalled. Remember, when a player is placed on LTIR, their cap hit doesn’t simply come off the team’s books. Instead, the team is allowed to spend over the salary cap ceiling by the amount of the the player’s cap hit subtracted by the amount of cap space available, hence the need to make a paper transaction to bring the team towards the salary cap before placing Brown on LTIR.

With Matt Luff being recalled prior to Brown's LTIR placement, the #LAKings found themselves only $20,992 from the ceiling, which gave them a new upper limit and ACSL of $79,479,008.

If you see him tonight, congratulate Luffer on his recall today! Select Ontario Reign players will be signing autographs behind Section 104 from 6:30 to 7:30 on Ontario Reign Night.

-In lieu of actual line rushes, the Kings worked on power play breakouts. It’s not yet clear what the actual lineup will be, but because of the structure in several drills and because Kyle Clifford and Oscar Fantenberg remained on the ice for extra work, we’re expecting Jaret Anderson-Dolan to make his NHL debut and Paul LaDue his season debut. I’m not expecting any vast reworking of the lines and pairings. Expect LaDue to play with Dion Phaneuf. 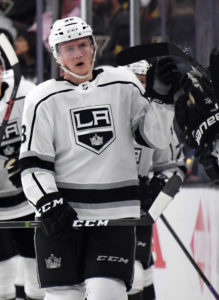 “He’s the first one to come to a younger guy and help him out and he’s really experienced so anything he can help with, he’s telling you,” LaDue said of Phaneuf. “He’s trying to help you out as much as he’s focused on his game and he’s very vocal out there so you always know where he’s at and what’s going on and I think that helps a lot. I’m excited to play with him tonight.”

There have been a number of defenders that have been positive influences since LaDue joined the organization.

“I remember skating with Greener my first training camp and you could just tell he was one of those guys, too,” he said. “And all of the older D – Marty, Dion, Muzz, Dewey – they all help out and everyone’s vocal and helps with everyone. It’s kind of just how hockey guys are and I’d like to get in there and help younger guys like A-D and Wags, too, so it just goes down the list.”

This will be the first game LaDue will play after having switched from his assigned organizational number of 38 to two, a preferred number. LaDue wore six at North Dakota.

“I was two for a couple years in Juniors and six was taken [in Los Angeles], so I just decided to go with two,’ he said. “Rhymes with LaDue.”

-In all of the unexpected Quick hoopla this morning, we’re burying the lede we expected to run with: Jaret Anderson-Dolan is expected to make his NHL debut tonight. At 19 years and 25 days, he’ll become the 10th youngest player to ever play for the Kings, following Aki Berg, Jimmy Carson, Brayden Schenn, Doug Smith, Olli Jokinen, Drew Doughty, Dustin Brown, Craig Duncanson and Craig Redmond.

Anderson-Dolan is remarkably mature for someone who turned 19 during rookie camp, but as is standard for any player making their debut, “[There will be] a little bit of nerves,” he said. “I think a little bit more excitement than anything.”

“He obviously had a pretty good game, a couple breakaways, a lot of good chances, so if I’m in tonight, hopefully get a couple of those myself,” he said.

Having played the last three seasons for the WHL’s Spokane Chiefs, he provided a scouting report on Detroit rookies Michael Rasmussen (Tri-City) and Dennis Cholowski (Prince George/Portland), both of whom played in the U.S. Division against Anderson-Dolan. Rasmussen, profiled two years ago as part of the Royal Lineage feature, was selected two spots before Gabe Vilardi in 2017. The 6-foot-6 forward is a Jason Allison-type player who has good hands and a high IQ around the net and made his NHL debut during Thursday’s overtime loss to Columbus. Cholowski, a defenseman who played with Mikey Eyssimont at St. Cloud before signing a pro contract and shifting to the WHL, scored in his NHL debut Thursday.

“Rasmussen is obviously a big guy. He uses his size, gets to the net, but he’s pretty underrated with his skill. He’s got good hands and can skate pretty well,” Anderson-Dolan said. “Cholowski is just a good puck-moving defenseman. He plays a simple game, but he does it very well. He gets pucks to the forwards and joins in the rush when he can.”

This will be a Red Wings team that leans more heavily on its younger players than the Detroit teams many fans are accustomed to seeing at Staples Center. When such young players – as well as defensemen like Joe Hicketts, Libor Sulak, Filip Hronek and young forwards Anthony Mantha and Dylan Larkin – haven’t logged a great deal of games played, how do the Kings pre-scout opponents across the conference that they don’t see frequently?

“We always look at their recent games and see their style of play and what that becomes, the personnel,” Stevens said. “They’ve got some young guys on the back end that are extremely mobile. You do some research, you make sure the players have some bios that they can read up on the player and understand what kind of player they’re going to be facing. The coaches of a lot of those players know these kids from junior or college level. You ask questions in the room. A lot of our guys know the guys, so they can share a lot of information about the player. Certainly try to paint an M.O. of that player, what his tendencies are. A lot of times if you can find a comparable guy in the league – say, ‘when you’re playing against this guy, think you’re playing against so-and-so, because this is the kind of player that he is or the skill set that he has.’ They have several of them, but it seems like the common denominator in all of those is they have speed and skill and can really skate.”

The Red Wings will be without injured veteran defensemen Jonathan Ericsson (upper-body), Mike Green (illness) and Niklas Kronwall (lower-body). Their alignment is expected to include groups of Nyquist-Larkin-Mantha, Bertuzzi-Nielsen-Rasmussen, Abdelkader-Athanasiou-Vanek and Glendening-Ehn-Helm up front and defensive pairings of Cholowski-Daley, DeKeyser-Hronek and Sulak-Jensen. Jonathan Bernier will start in goal. 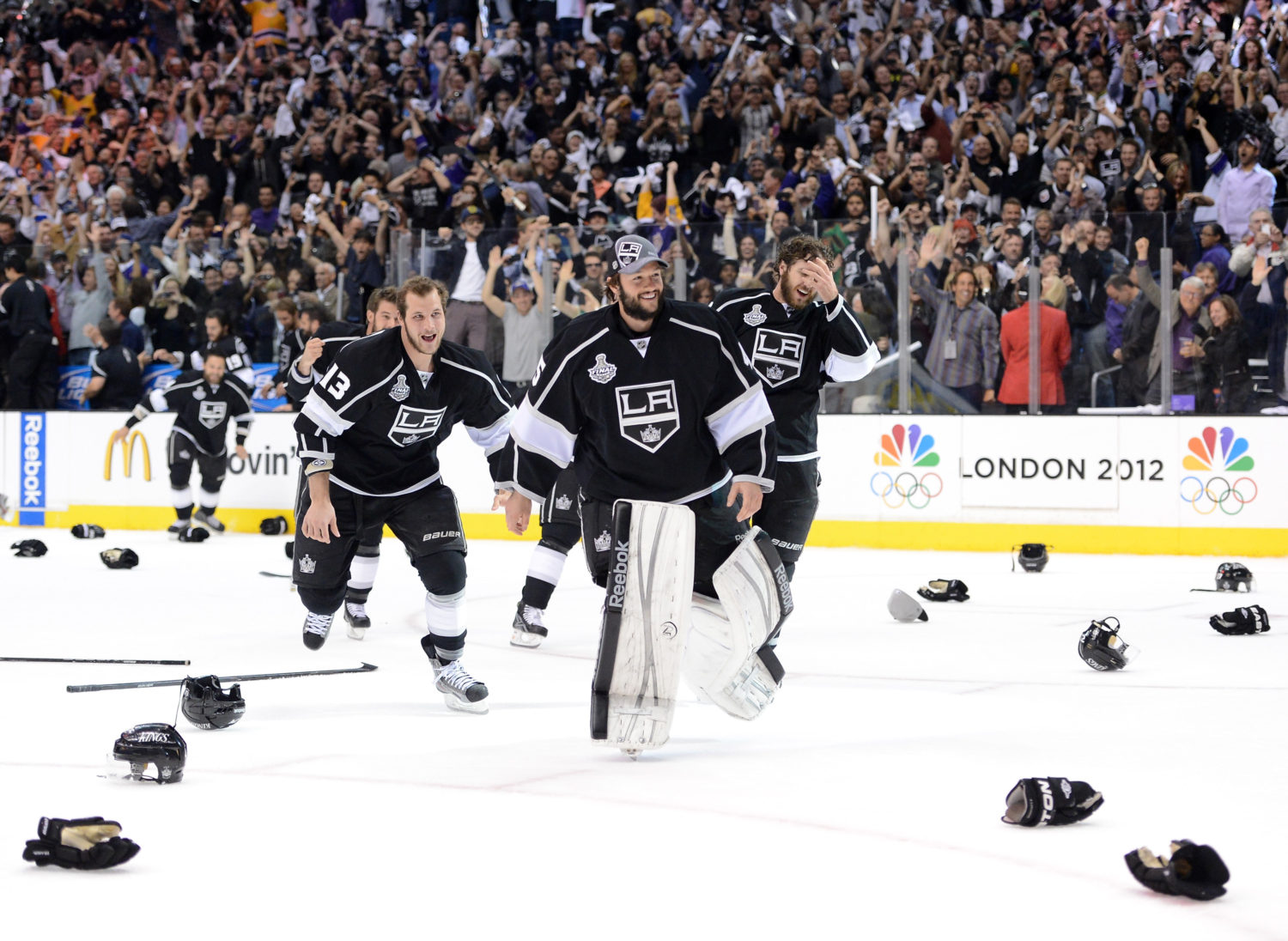 -Stevens wants to see the Kings manage the play and the puck better tonight than they did against San Jose, especially early in the game when the Sharks established their forecheck and it took some time for the Kings to handle it. “If we can just do a better job moving pucks quickly, getting to pucks quickly, we’ll spend less time our zone, more time in their zone and give ourselves a much better chance to establish more of an offensive zone presence,” Stevens said.

Los Angeles will also look to create opportunity and momentum through a power play they’d like to see attack the net with a shot-first mentality.

“At the end of the day, I think there’s got to be some principles there that regardless of who’s on it, you’re doing a better job of attacking the net and a better job of taking advantage of shot opportunity, which I thought was a big problem the other night. I’d just like to establish the shot a lot more than we have,” Stevens said.