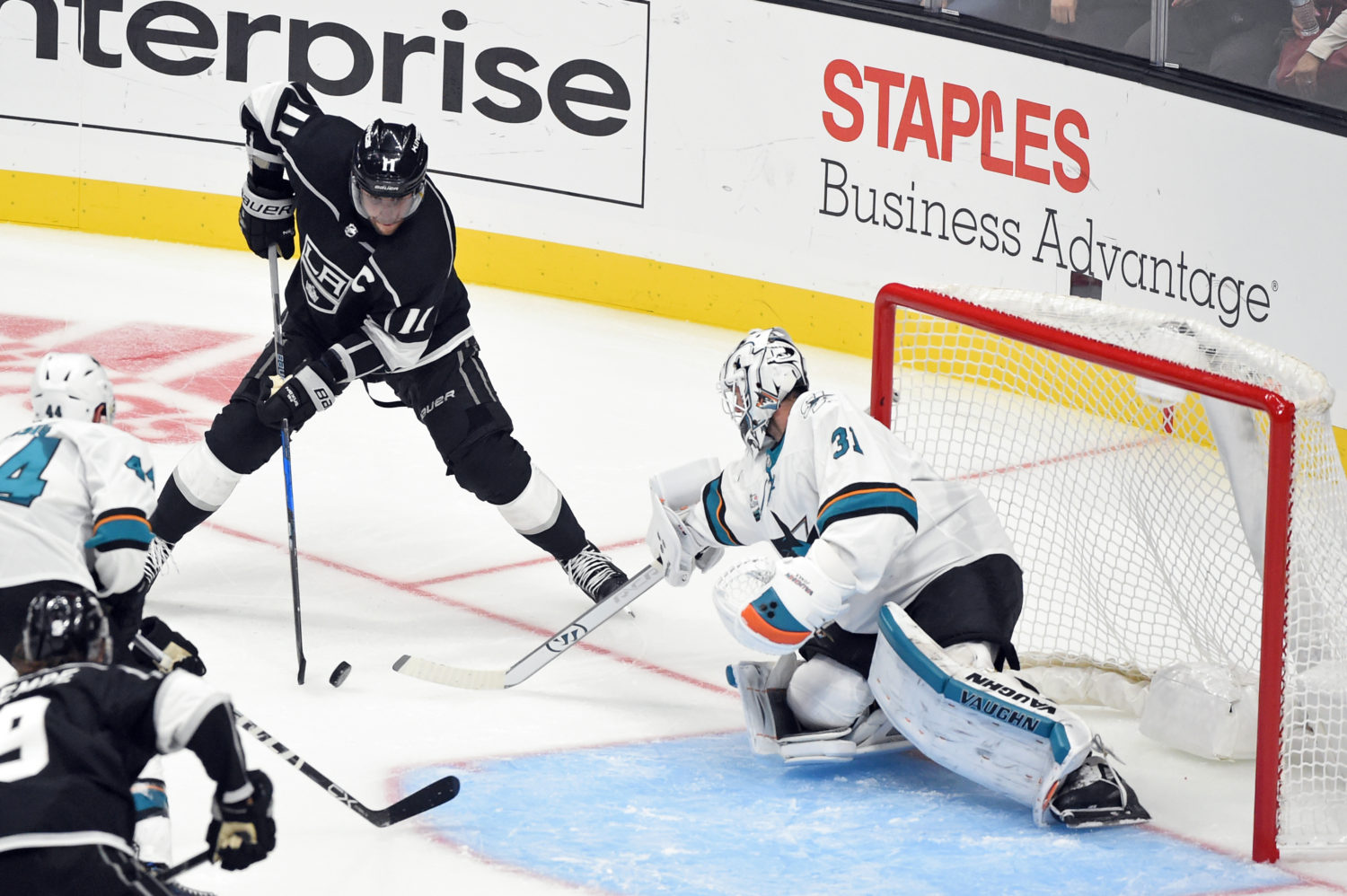 John Stevens, on the positives from the overtime loss:
I thought the goal Kopi scored was a big goal, and then the goal that Tyler got, obviously it got us right back in the game. Probably the most encouraging thing is the way Kopi and Iafallo and Kovalchuk played. I thought far and away that was the most jump Kovalchuk’s had there, and I thought he made a lot of things happen out there. It looks like he had really good energy, so that was a really good sign.

Stevens, on Austin Wagner’s NHL debut:
He continues to impress with his speed. His speed is a really good asset that uses. It seems like he gets one or two or three breakaways a game just from flat-out, straight-line speed. I think he can really be a tough guy to play against because any time he gets in a footrace he’s got a chance to win it, whether it’s beating out an icing play or getting in behind a defenseman or just winning a race to a loose puck, which he did again tonight. It’s good to see.

Stevens, on Timo Meier’s contact with Drew Doughty’s leg:
He got slashed behind the play. Sometimes you get hit there and you get in on the side of the leg, there’s a nerve there. The leg goes numb for a minute. They obviously didn’t see it. He got looked at, he was fine and came back. [Reporter: Your emotions when he was down on the ice pounding it, what are you thinking when you were seeing that?] I saw the replay right away, so I figured it was something that just stung him there. It didn’t look like it was too vicious. Had they seen it, it’s a penalty. A lot going on out there. But he didn’t miss too much time, so he’s good to go.

Stevens, on the decision to reunite the Pearson-Carter-Toffoli line:
Just history. Obviously those guys have played together a lot. They’ve played together and played well in playoff situations. We think it should be a really good line for us. It gives you Kempe as your third line center there and puts that line together, it gives you a little bit of balance up front there. Just the history of those guys playing together in the past, there’s no reason they can’t be effective again in the future.

Stevens, on the breakdown leading to San Jose’s overtime goal:
We had a long change there. They had fresh people on the ice. I think Tyler was thinking about changing there, realized that it wasn’t a good idea, and I just think he kind of got beat by a step going to the net there. It’s funny, with three-on-three, a lot of times it’s the defending that gets you, and I thought tonight we had a chance to defend that play and didn’t, and that’s usually what happens. You had a good chance at one end, it goes back the other way. Break up a two-on-one, it goes the other way, but in that case we had tired people that didn’t defend as well as we normally would.

Anze Kopitar, on settling in after the first period:
The first period was what you can actually expect from the first period. The first game, everybody’s amped up mainly because the pucks are bouncing a little bit more. We’re trying to rush plays and you don’t connect on them and then once we got the first goal we kind of just settled down and started making plays. We played a lot more in their zone and then I thought starting the second period, obviously we got an early one, and then I thought we just developed our game and it was good. Unfortunate to only get a point out of it, but I think we should be encouraged from this game. Obviously there’s some stuff to work on, but it’s first game of the season so not everything is going to be perfect. But like I said, it’s encouraging to see that guys are playing with lot of intensity. We’ll keep getting better.

Ilya Kovalchuck, on the pace of the game compared to preseason:
No, actually I was feeling much better than the preseason. I think overall the first period wasn’t our best, but I think after that we played well and we just need to fix our power play because we’ve got to be better with the tools we’ve got. We have to be better than what we had right now, so we’re going to work on that tomorrow, we’ll talk, and we’ll be better next game.

Austin Wagner, on whether it boosted his confidence to have had quality scoring chances on the Sharks’ top-tier defensemen:
Not really. Again if I would’ve scored it probably would’ve helped a little bit, but I didn’t get the goal. So it’s nice to get a chance, but at the same time I’ve got to bear down. Might not have went to overtime if I would’ve scored that goal, so it’s a team game and we’re going to get better for the next game on Sunday.

Wagner, on having his parents watching the game in the stands:
It’s been awhile since I’ve had my parents see me play so I’m sure they’re very proud, but I’ll go shower up here and see them and talk to them then.

Wagner, on whether he had a “welcome to the NHL” moment:
No, not really. I think warmups it kind of set in. But like I said, that first period I kind of had a little bit of nerves and they wore off there and I started just playing my game again and having fun and not worrying about anything and that’s when I started getting some chances. So just carry the positives into Sunday, and I think we’re going to look at tape tomorrow and see what we can do better and hopefully have a lot better game on Sunday and come away with a win.

Wagner, on his move on Erik Karlsson:
Yeah, he’s a pretty good defensemen. But again, like I said, you get three chances in a game, one of ‘em needs to go in. If I score one of those, who knows, maybe we win the game instead of going to overtime.

Kevin Labanc, on the win:
Playing the game ice level was pretty awesome, and it was fun to play in especially because of the rivalry so I mean to get the first win especially in Staples Center is a pretty good feeling and it is a great way to start road games. The refs were not really giving us the calls we wanted but we played our battle.

Joe Pavelski, on the win:
This was a hard-fought game. The ice was not very good even during warm ups but that is how it is, but it was just kind of what you expected for their home opener. They played hard anyways, and it was just a physical game and we hung in there and got the lead. Overall it was just a fun game to play.

-With the overtime loss, Los Angeles fell to 33-15 in games decided in overtime since the NHL’s switch to the three-on-three format in 2015-16. By falling from a .702 winning percentage to .688, they dropped to second in the league behind Calgary’s .694 overtime winning percentage over that span.