With injuries, Kempe among those getting a look at wing; Amadio's quickness - LA Kings Insider

With injuries, Kempe among those getting a look at wing; Amadio’s quickness

Say! You may remember throughout much of the second half of the 2017-18 season and its aftermath that the Kings were in full-speed-ahead mode towards Adrian Kempe’s continued usage as a center. There were both positives and drawbacks when projecting him at either center, which is what he and the team preferred, or the wing, where he had played for MODO and much of his AHL tenure. On one hand, he matches up against other quality centers with a defensive awareness that belies his young age and is tantalizingly capable of attacking the middle of the ice with speed. On the other hand, there may be a greater ceiling for production on the wing, and let’s face it, his 38.5% faceoff rate has to be improved to justify his permanent assignment at center. For much of the off-season, and at the start of training camp, he certainly seemed poised to hold down the club’s third line center spot, where Alex Iafallo and either Gabe Vilardi or Trevor Lewis would flank him.

What is it that’s said about the best-laid plans of mice and men?

Enter Jonny Brodzinski. Rather, exit Brodzinski, a casualty of a high-intensity preseason game in which the right wing weathered a Michael Del Zotto hit in an dangerous spot near the boards and suffered a shoulder injury that will sideline him indefinitely. Exit Vilardi, who hasn’t been able to practice alongside the team because of a back injury that has kept him on the sidelines since the late summer. (Both may ultimately factor into the team’s plans on the right side of the lineup this season, but neither will play in the near future.)

Minus two wings – Vilardi played center for most of his OHL tenure, but was penciled into the Kings’ plans this year as a potential right wing – John Stevens and his staff were forced to make adjustments, and one look that they’ll consider will feature Kempe on the left wing, opposite Ilya Kovalchuk, on a line centered by Jeff Carter.

“With Brodzinski going down on the right side, we thought he had a really good opportunity to make our team, so we have to look at some other options there. Vilardi’s another kid that we thought going into training camp might push for a position, whether it was center or wing, right shot. So we’re going to take a look at a lot of things, John Stevens said.

“[Jaret] Anderson-Dolan we’ve looked at at wing and at center, and we’re going to do that. [Michael] Amadio’s played well at center. [Nate] Thompson can play wing and center, and we know Adrian can play wing and center, so we’re just going to continue to look at different combinations and see if something doesn’t create a spark. Maybe there’s some chemistry there you didn’t expect. But [Kempe] seems very comfortable on the wing. He can move back to center seamlessly. It’s just something we want to take a look at. Nothing we’re committed to at this point.”

And that’s what preseason is for. Just as the team will tinker with where they’ll place Ilya Kovalchuk to start the year, they’ll also give the requisite looks to Jaret Anderson-Dolan and Emerson Etem at right wing, the latter of whom is attending camp on a professional try-out. Teams with good center depth will have multiple forwards capable of taking faceoffs on any given line, and that will continue if Kempe and Carter end up playing alongside each other. 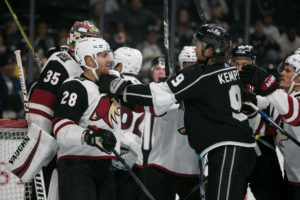 “Everybody knows that Carts is really good on draws, but if he’s not feeling it, he can obviously ask me if I wanted to take some of his backhand [draws] or stuff like that,” Kempe said. “I’m going to start [tonight] at wing. In a game situation, sometimes I’m going to be the low guy, sometimes I’m going to be the centerman, so we read off each other. Both me and Carts like to keep our speed up, so we’ve got to try to read off each other.”

Kempe has practiced at wing for three consecutive days, which has helped re-summon the responsibilities of using his speed to forecheck and to win battles along the walls. When he scored eight goals in 17 AHL playoff games as an 18-year-old in the spring of 2015, he was playing wing.

“I’m kind of used to playing wing, so it’s not that hard to go back to wing again, so it’s going to be fun to play with those two,” Kempe said. “Hopefully I can use my speed and create a lot of opportunities for them.”

If there’s an under-reported story from training camp, perhaps it’s the noticeable quickness that Michael Amadio has demonstrated through his first two preseason games and the Kings vs Kings exhibition. Amadio is among the players to have remained in Los Angeles over the off-season, and during his time at the team facility got in a tremendous amount of upper and lower-body work – “just overall work, trying to get a little bit faster,” he said – that has resulted in a quicker first step and better acceleration. He’s playing with a good pace.

“I think I feel a little bit quicker out there,” he said. “Maybe my first couple steps that I didn’t have before – I think that’s the biggest thing I’ve noticed.”

It’s tied in to Kempe’s shift – tonight, at least – to wing. Amadio is expected to play alongside Tanner Pearson and Tyler Toffoli, which, with Alex Iafallo reclaiming his place alongside Anze Kopitar and Dustin Brown, could give the Kings three lines with proven scorers. But this is why the preseason exists, and while any team would like to establish continuity heading into the season, the L.A. coaching staff is still going to look for that spark amidst injuries. Iafallo’s strong debut season alongside Kopitar and Brown was borne out of that similar type of open-mindedness.

With four preseason games this week, the Kings aren’t exactly running out of time trying to create opportunities for all of the 28 healthy players on the active roster.

“To be honest, it’s got some challenges,” Stevens said. “[There were challenges] the first week, with two games on the same day, especially the one in Vancouver where we’re traveling different places. You’ve got two teams playing on the same day, so that was a bit of a challenge, and now you get your numbers down a little bit, but it’s got a heavy schedule this week. I think we’re going to try and manage that line between getting guys ready and not putting them in a fatigue situation, but at the same time it’s an important week to get guys get ready, so I think your guys that are veteran guys will end up playing four or five games. Some of the young guys might end up playing six games, which they probably need. We’ve got a good break after the end of this week going into next week where we’ve planned it out where guys can get real rest, recovery and then get some good, quality practice time heading into the San Jose game.”

Adrian Kempe, on whether he’s happy with where the team is at midway through the preseason:
I think as a team we can get better. Obviously, we haven’t won any games yet, and that’s the goal. You need to have the preseason as well, and I think we just haven’t played well enough. Hopefully we can turn it around here for the last couple [days] before the season starts. Come together and just play better overall. Just have got to step it up a couple of steps, every single guy on the team, and hopefully we can start winning some games here before the season starts.

Michael Amadio, on whether he sees playing with Tanner Pearson and Tyler Toffoli as “an audition”:
I’m trying not to think too far ahead. I’m just trying to go out there and play my game. With Tanner and Tyler, they’ve had great success in the league, so I’m just going to try to build off them, and hopefully we have a good game tonight. 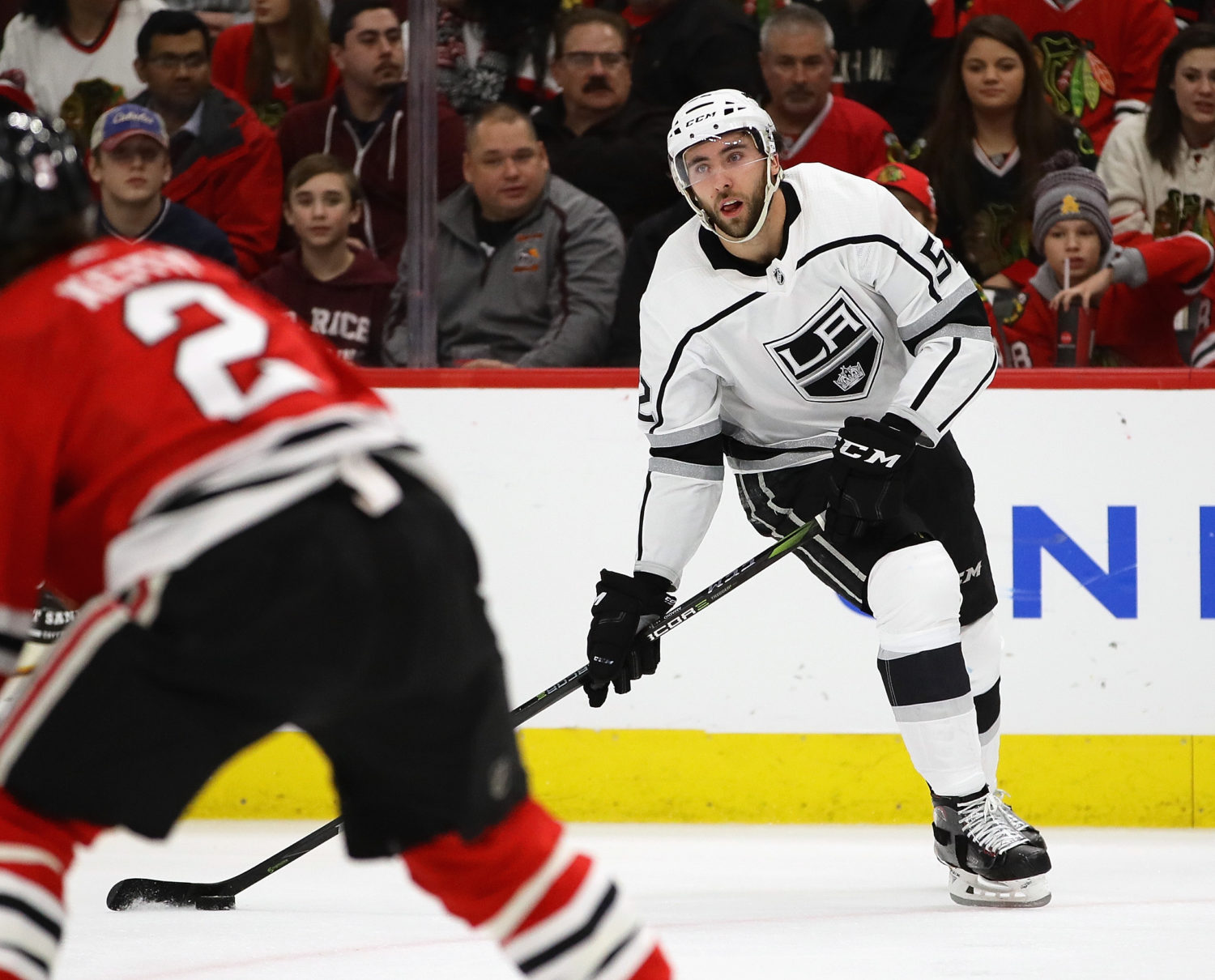