THIRD PERIOD
20:00 We’re back!
18:10: On a contested break, Carter tries to slip a backhand under Markstrom’s pads but is denied.
16:45: LAK GOAL. 3-1. Kopitar (Iafallo, Brown). Iafallo catches up to a puck deep along the left wing and centers to Kopitar, who beats Juolevi to the far post and redirects it on his backhand.
16:03: LAK GOAL. 4-1. Phaneuf (Lewis, Thompson). Paheuf clapper from the top of the left circle.
12:46: LAK PENALTY. Muzzin gets his elbow up, makes contact with Stecher’s head. Didn’t look great on a live glance.
10:53: Threatening penalty killing rush by Brown. I’ve liked his game tonight.
10:46: Heading downstairs for TV. And thus ends tonight’s running live blog coverage. Thanks for hanging out, Insiders.

doughty defending gagner here shows you exactly how much attention you should pay to preseason results pic.twitter.com/yDb6yhQ4ZF

17:30: Kovalchuk steals a puck on a Vancouver outlet, shakes off two defenders to skate in alone on Markstrom, who denies his low glove-side shot.
14:56: LAK GOAL. 2-1. Toffoli (Amadio, Pearson). Toffoli gloves a high Amadio lob and brings it down *near* his skates, skates into the slot, and shoots one that Markstrom probably should’ve gotten a little bit more of. Markstrom had a chat with a linesman; I’m guessing he might’ve thought Toffoli might’ve held onto the puck for a beat too long with his glove. In any event, it was a shot that could’ve been stopped. Two assists for Amadio.
14:22: Quick point blank save on Baertschi.
9:55: Gudbranson levels Clifford. Oohs and aahs.
9:50: PENALTY VAN. Gudbranson for holding. Gudbranson grabs a hold of a King in a race for a puck with Clifford breathing down his neck.
7:55: Nice no-look Kovalchuk-to-Carter touch pass. Markstrom stops and covers Carter’s shot.
5:52: Because of the ice conditions and because it’s preseason, this… isn’t quite 2014 Kings-Blackhawks.
2:55: PENALTY LAK. Muzzin for interference.
2:20: Horvat had an opportunity to reach out and wrap a puck around Quick’s right pad but lost the handle before the puck skittered towards the corner.
1:22: Good Baertschi look from the high slot. Good pressure from VAN.
0:48: PENALTY LAK. Doughty for slashing.

FIRST PERIOD
20:00: And we’re off.
17:40: Harvard product Alex Biega stands Pearson up at the blue line, forcing a dump in.
16:45: Soft ice, soft boards, and a little bit of a dark spot behind each goal line. Preseason hockey!
16:25: Markstrom fights off a sharp Iafallo wrister.
15:57: BRASS BONANZA ALERT!!!
15:57: Second brief delay to work on the ice in Jonathan Quick’s crease.
14:18: Amadio misses wide, short-side, on a two-on-two rush.
14:12: Fantenberg’s low shot through traffic catches the post.
13:25: Quick stops Goldobin’s wrister from the left circle. Scoring chance.
12:57: Brown’s close-range backhander denied by Markstrom. Scoring chance.
12:45: Kopitar-to-Brown on a three-on-two. Kick save, Markstrom. Scoring chance.
12:31: Iafallo wrister; Markstrom… elbow save? Scoring chance. Lots of scoring chances!
12:06: Ice issue at Markstrom’s net. Ice maintenance. Brief delay.
12:06: PENALTY VAN. Markstrom delay of game for putting the puck over the glass. Kovalchuk-Doughty-Carter-Kopitar-Brown.
11:48: Markstrom’s net becomes dislodged again. The fourth stoppage because of ice/net issues. Two at both sides!
11:15: Kovalchuk’s one-timer broke Brandon Sutter’s plastic skate protector.
11:00: Fifth delay to work on a net, which became dislodged behind Markstrom again.
9:50: Two Quick saves that were difficult to describe because of the bizarre bounces they generated.
9:24: PENALTY VAN. Virtanen for high sticking.
9:10: Quick leaves his stick just outside the trapezoid while trying to play a puck. He’s able to retrieve it at a non-threatening time.
6:10: Good Quick save on Gagner’s point blank, far post look.
5:15: GOAL LAK. 1-0. Toffoli (Clifford, Amadio). After an interesting carom, Clifford issues the puck to the high slot, where Toffoli beats Markstrom glove-side.
3:26: PENALTY LAK. Thompson for holding.
1:28: Quick denies Horvat’s near-post redirection.
1:06: PENALTY VAN. Gagner serves a too many men on the ice bench minor.
0:35: A dasherboard ad has been detached from the boards behind Quick.
0:18: Stecher blocks a Kovalchuk shot, skates in on a two-on-one, has a wristshot denied by Quick’s left pad.
0:00: Period over. 54 seconds of Vancouver’s penalty will carry over into the second period.

Pre-game notes: One of the special aspects of neutral site games is how many different NHL teams are represented in fans’ jerseys. There are more Kings jerseys than any other – this will be a partisan crowd for Los Angeles – but there are also a number of Canucks, Golden Knights, Blackhawks, Penguins and Utah Grizzlies jerseys, as well. … Click here to read a story I wrote about Trevor Lewis playing for ECHL-Utah during the lockout. One of his games was against Kyle Clifford and ECHL-Ontario. “The first thing he said was ‘Don’t hit me,’” Clifford recalled of his on-ice exchanges with his Kings teammate.” 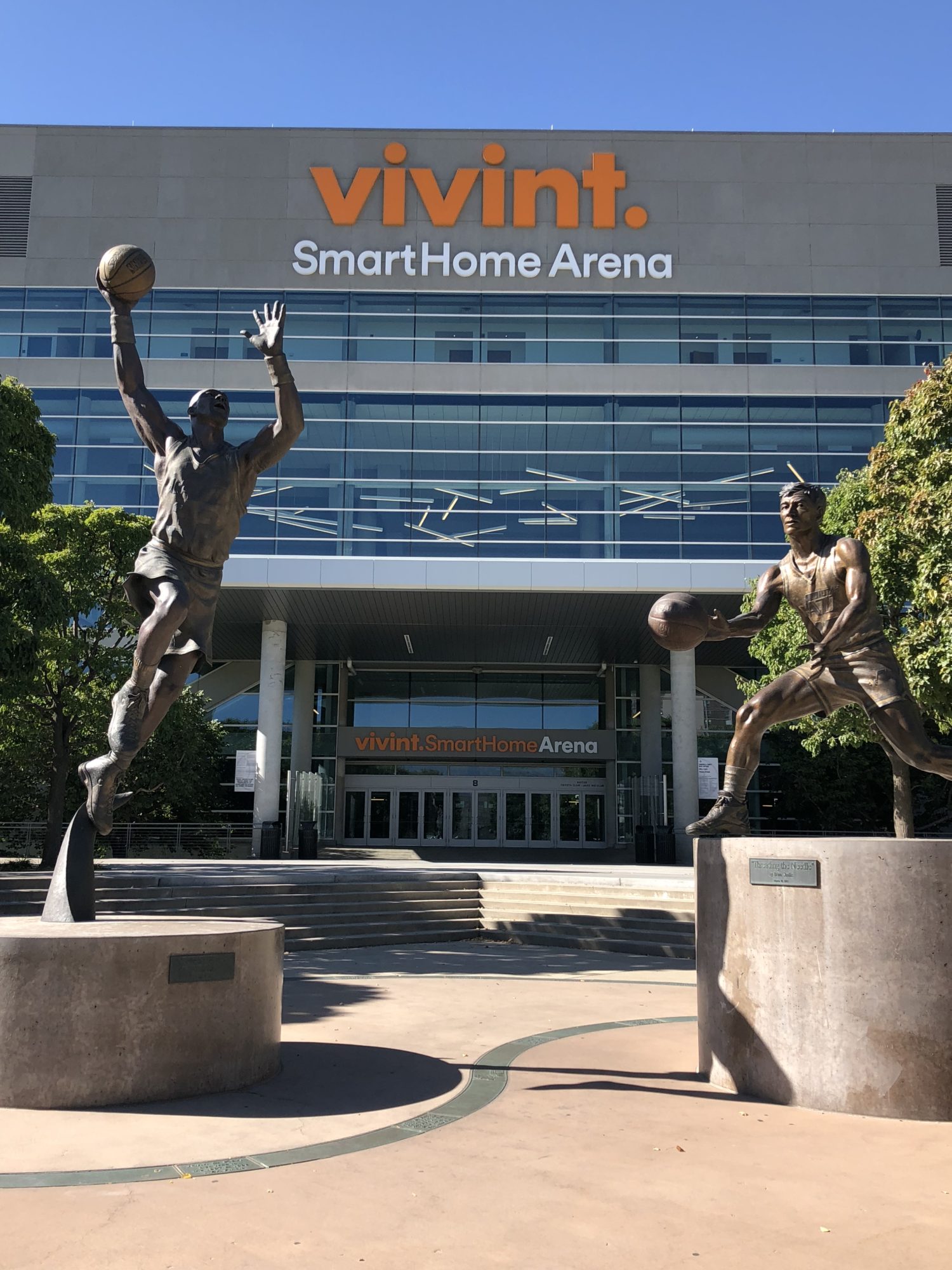 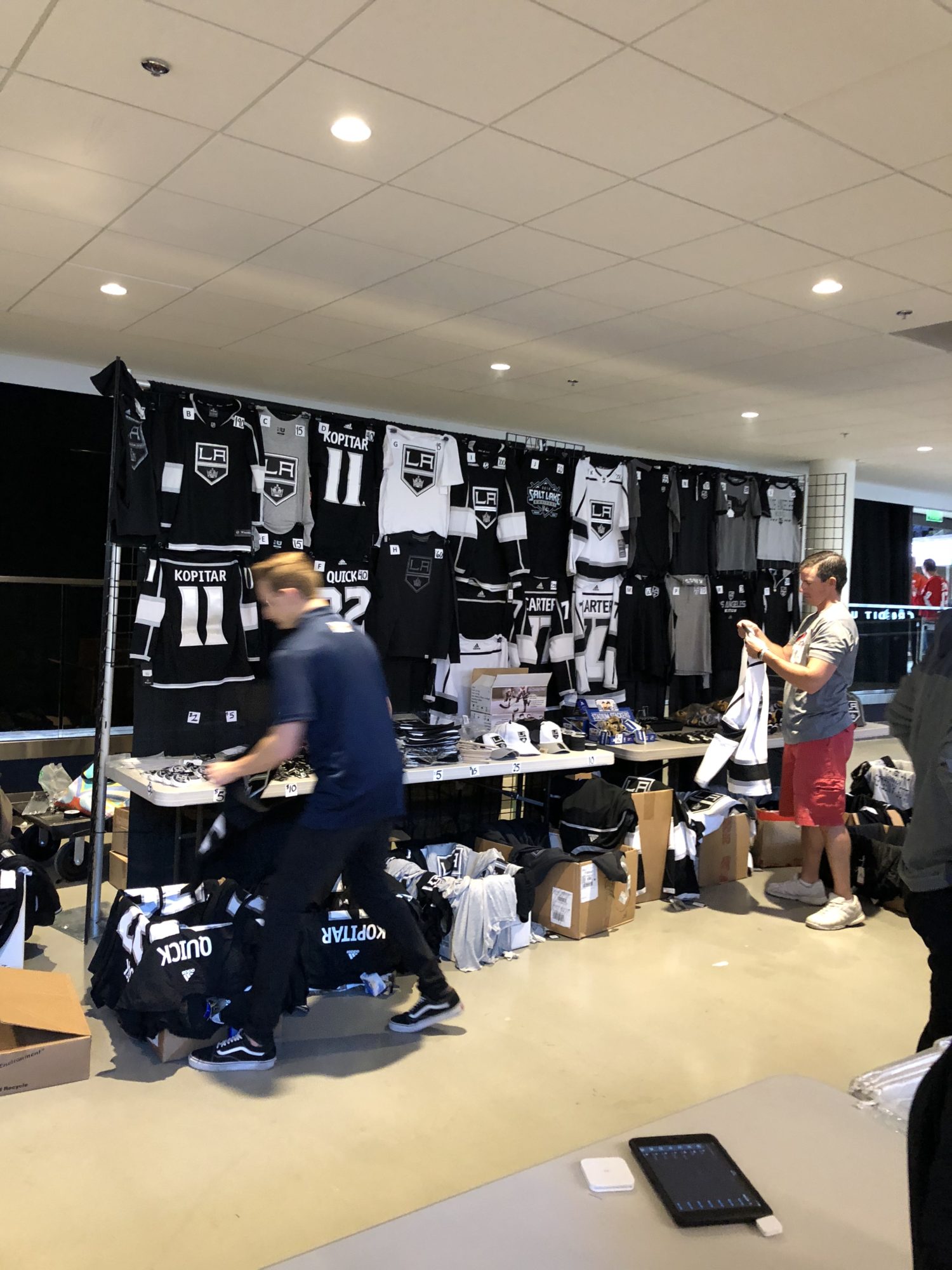 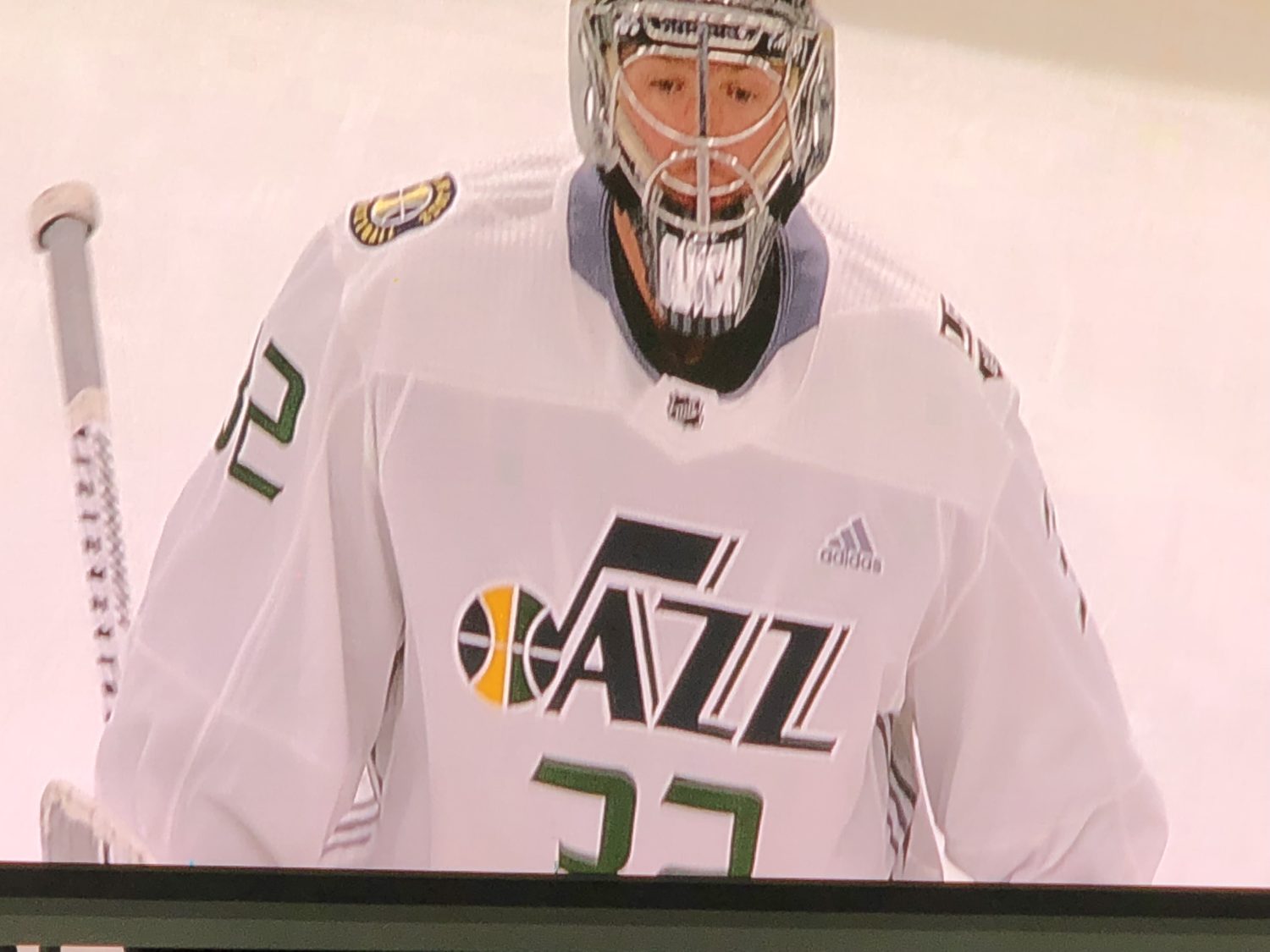 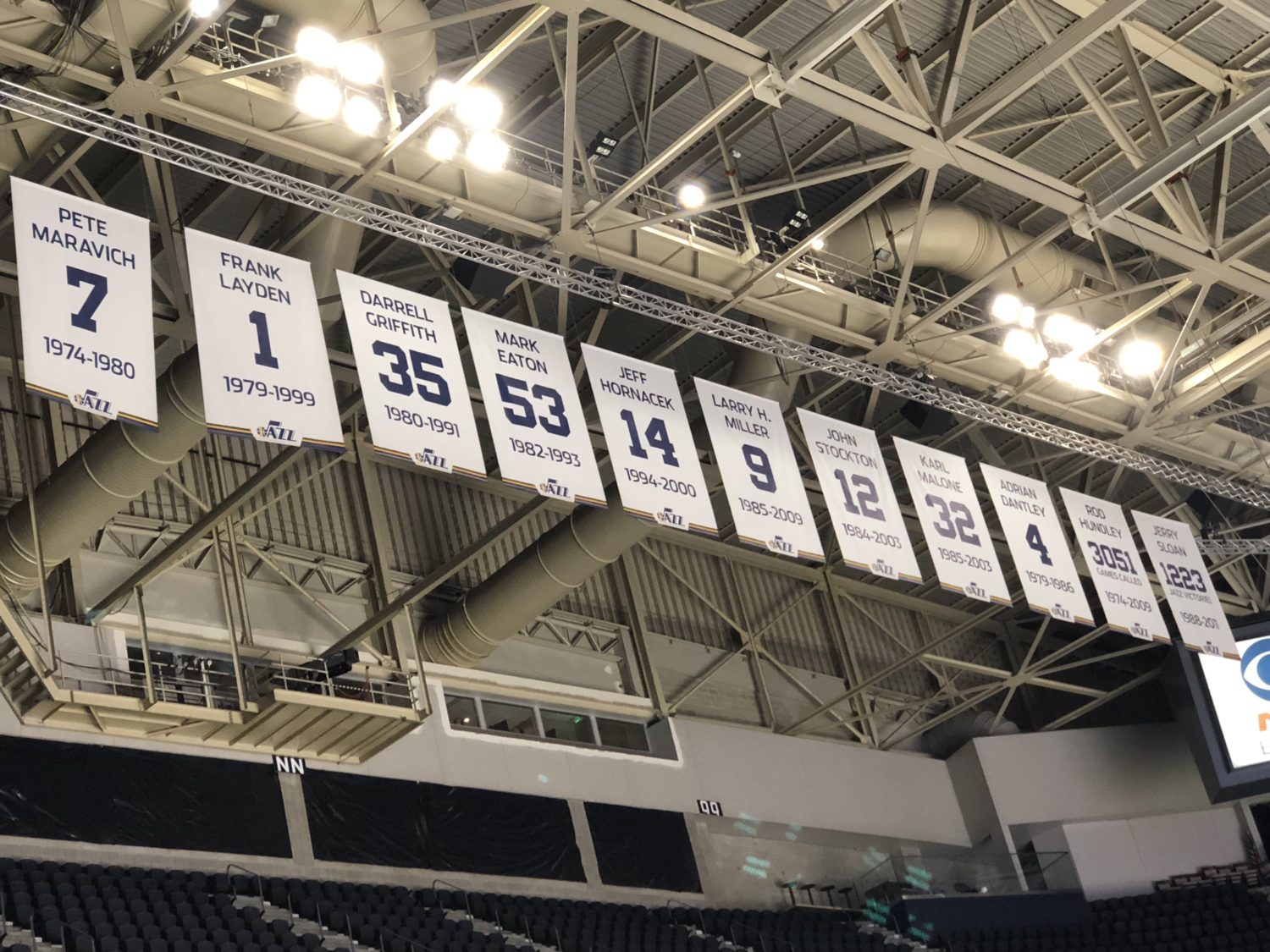