–The preseason is upon us! The LA Kings and Arizona Coyotes will play a pair of split-squad games at Staples Center and Gila River Arena on Tuesday. The full lineups aren’t yet available, but there were plenty of hints dropped in today’s practice sessions. The Los Angeles game group is expected to be today’s first group and should contain a contingent of players that includes Anze Kopitar, Ilya Kovalchuk, Dustin Brown, Drew Doughty, Adrian Kempe and Jonathan Quick. Jaret Anderson-Dolan was in this group. It’s expected that today’s second group will be those traveling to Glendale, Arizona, and will feature the likes of Jeff Carter, Tanner Pearson, Tyler Toffoli, Dion Phaneuf, Paul LaDue, Oscar Fantenberg, Kale Clague, Jack Campbell and Peter Budaj. Asked to confirm this, John Stevens let out a sly smile. “I’m not sure,” he responded.

Don’t write tomorrow’s line combinations in sharpie; the first preseason games will provide an opportunity to get players comfortable playing with each other. Some veterans will play with younger players. With two games on the same day – Thursday’s games at Vancouver and at home against Vegas are also split squads – there’s an opportunity to mix and match the talent.

“Just try and spread it around a little bit so we’ve got enough veterans going in two places and give everybody an opportunity, veteran guys to get their games in order, and guys that have been improving along the way, see how close they are to being ready to play in the National Hockey League and get an evaluation on young players that we’re not that familiar with,” Stevens said.

“The pros are going to get what they need to get ready and they’re going to really help the young guys come along and learn how to be good pros,” Stevens said. “I think it’s easy for them to adjust to the pro game so they’re not overwhelmed by two kids being together.”

-One last bit from Stevens on Oscar Fantenberg, who turned some heads with (mostly) very good play when he was called upon in the Vegas series. Fantenberg isn’t an infant in the hockey spectrum – he turns 27 on the second day of the regular season – but still should be able to continue to add on layers defensively.

“I know he’s older in age, but he’s young in experience over here,” Stevens said. “Last year was a big step for him. We thought he had some inconsistencies in his game. He went down to Ontario the second half of the year and had a great attitude and came back and played well for us. He played in a really intense environment and played well. The whole thing with any young player – and he’s young in terms of experience – we want to see consistency in his game that we can count on him to do certain things on a nightly basis. He’s had a really good summer. He came in tremendously fit. He looks like a more confident player out there. We’re excited to get him in some preseason games, just to see what level his game’s at. He’s one of those guys we were talking about, no different than a Brodzinski. He’s a guy we want to see if he’s taken another step in his game and he’s ready to grab a spot in our lineup. He’s done the work over the summer, that’s clear. He’s a good kid, he’s familiar with what we expect from him now. We’re anxious to see him play some exhibition games, see where he’s at.”

–Dustin Brown needed some repairs this morning. Looking at the reactions when it happened, Stepan Falkovsky felt awful about this.

An errant high stick from Falkovsky caught Brown up high. Brown headed back to the room to get it taken care of.

–Trevor Lewis underwent right hand surgery on April 24 and said on Monday that he’s feeling fine once again. “I just had a ligament repaired. I couldn’t play with it during the season. It’s back to 100% now, so it’s good,” he said.

“It bothered me for awhile. Just to get it looked at, we thought maybe a couple of weeks off would heal it. I was glad I got it in right away, got it done.”

Interestingly, while his hand was repaired, the doctors also put a pin in his finger to correct the injury he suffered during the game he left early at Minnesota on March 19. Two surgeries for the price of one! (That’s not how healthcare works.)

The timing worked out well, and Lewis said that he still had the remainder of the summer to train and get ready for the season. The rehab didn’t appear to spill into his conditioning, which allowed him to get some good pace-based training that many hockey players have credited for keeping them equipped to handle the raised tempo in the modern game.

“I think we tried to focus a lot more on the speed aspect,” he said. “The game’s getting a lot faster. We were on the ice doing sprints with weights on trying to get our acceleration up, and even in the gym, doing a lot more sprints and stuff like that. I worked on acceleration and a lot more conditioning, because the game’s fast now and you’ve got to be able to keep up out there.”

–And, of course, we had to ask for reaction to Alec Martinez’s hit on Drew Doughty late in the Kings vs Kings intrasquad game Sunday. “Just protecting my goalie,” Martinez said. “I think Dewey might’ve sold it a little bit, too. He went down like a sack of potatoes. It was all in good fun. I think everyone saw us laughing and [we] gave a little high-five at the end. Just protecting the goalie. All in good fun.”

“Just joking around a little bit,” he said. “I was digging at the goalie, so he had to defend his goalie, and that’s how it goes. He got me good.”

Independent of shenanigans, it was good to get bumps, hits and dings in game-like situations. It’s of particular importance given that Arizona has already opened its preseason, having lost to Vegas 7-2 last night.

“You can do all those drills in practice, but there’s really no other way to get ready for someone barreling down on you than to just do it,” Martinez said. “It was good to have that game-like situation and knowing that for the most part if I’m going back for a puck, I know Kopi’s not going to try to put my in the first row. It’s as close to a game simulation as you can get, so it’s good to get those reads, get the timing before we actually head into an exhibition game.” 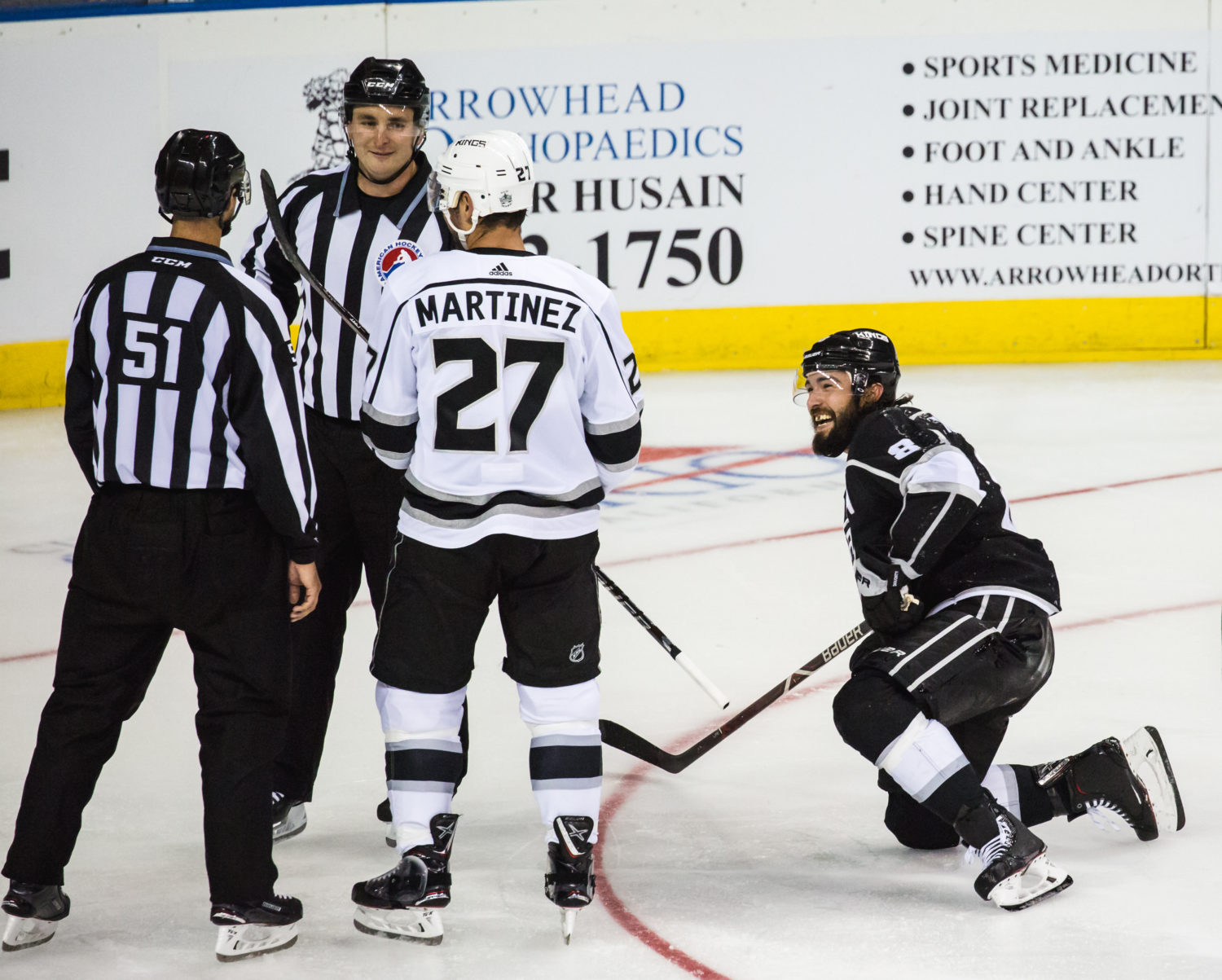 –Emergency goalie tryouts! Via the Kings:

“The NHL requires each home team to have an emergency goalie in the stands at every game. It is rare that one of these goalies sees action in a game but it can happen. One of our fans might have the chance to live out their NHL dream at STAPLES Center and that begins on September 23 with our open tryout,” said Kings President and Hockey Hall of Famer Luc Robitaille. “We look forward to scouting our local talent.”

The event, which is open to the media, takes place on Sunday, September 23, from 4-5 p.m. A member of Kings hockey operations department will be at the event to evaluate the candidates. If a member of the media is interested in participating, please reach out to the Kings Communications Department for additional information.

Requirements:
-The candidate must not have signed a contract to play in any professional league.
-If the player played on a tryout agreement they may still qualify for amateur status.
-Junior or Collegiate playing experience is required.
-The candidate must live in the Los Angeles metropolitan area.
-All candidates must be 18 years or older.
-No walkup registrations will be accepted.