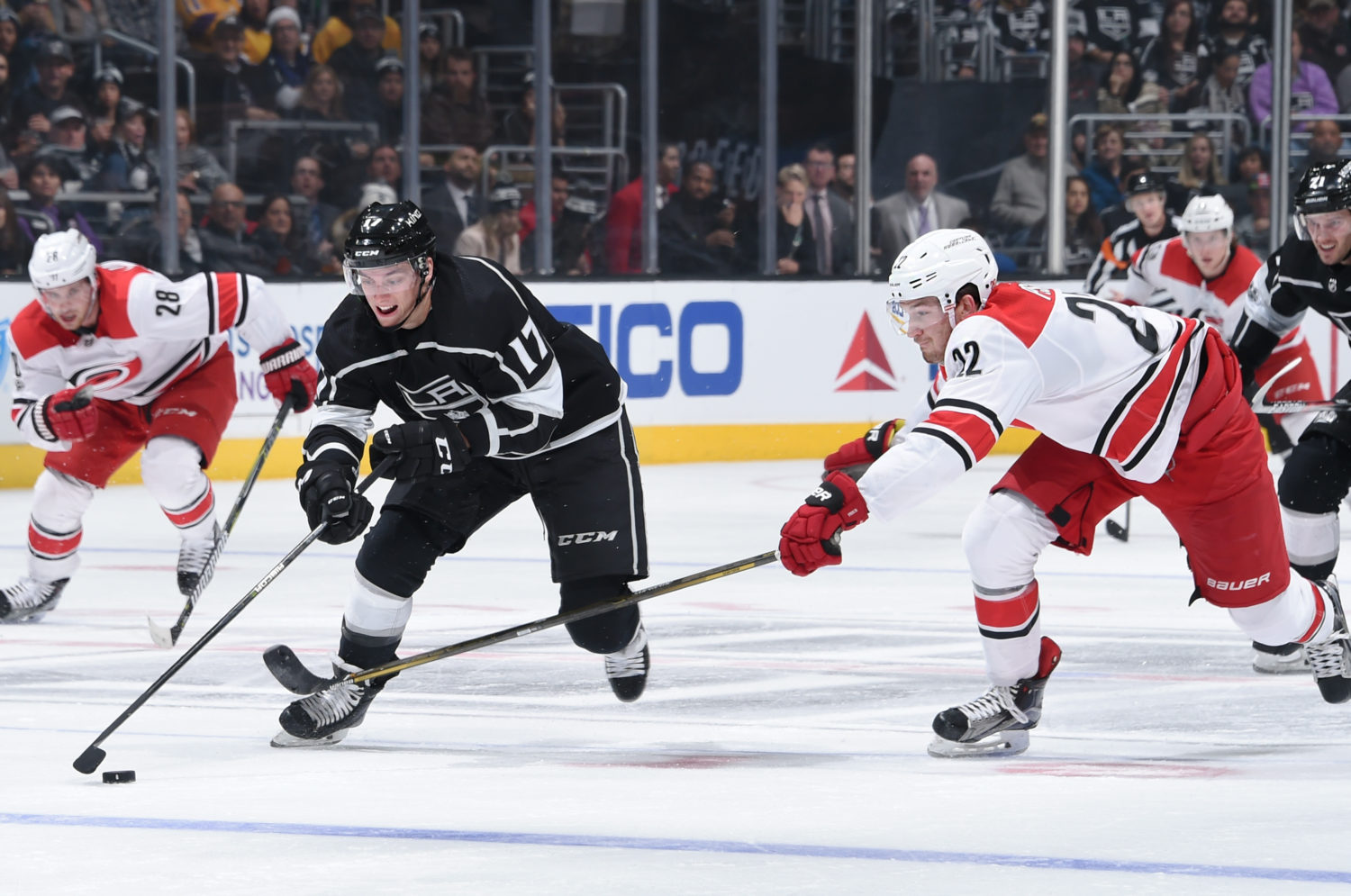 -When we had met with Stevens in late April during exit meetings, he was in the process of studying the team’s first period goals-for and goals-against discrepancy. Since then – amidst the NHL Draft, development camp and, after returning from the east coast, rookie camp – he’s been watching an inordinate amount of video in multi-pronged efforts to keep Los Angeles a playoff team and boost the offensive output. He estimates that there was only a week or two in which he didn’t dive into heavy hockey analysis. How much time off did he have? “It depends what ‘off’ means.”

As Stevens noted, “when you’re coaching, you don’t ever really get away from it,” and that mantra continued through much of June, July and August. After having visited with all the players in their homes in advance of the 2017-18 season, he visited Dion Phaneuf and Tanner Pearson this past summer.

Because Phaneuf joined the team midway through the season, Stevens and Strength and Conditioning Coach Matt Price met him on Prince Edward Island over the summer to get a sense of what his summer was like, his resources, his “home habitat” and his gym. Stevens also visited Tanner Pearson and his trainer in Kitchener over the summer while he was in the area.

-Regarding Pearson, Stevens was asked if the forward was going to be on a “shorter leash” this season. “I don’t know if I’d call it a leash,” said Stevens, who drew on Pearson’s history in a primary scoring role. Sharing some of the trends as in this story, Stevens noted that Pearson was on the ice for more goals than the previous year and did much of the dirty work that didn’t necessarily show up in the point column. “I wouldn’t say ‘leash’ at all,” he said. “We have big expectations of Tanner taking a lot of responsibility and really solidifying the top-six in our hockey team.”

-Stevens was also asked about whether this will be a different team stylistically than the year before to the naked eye and responded that the staff wanted to “maybe add to what we’re doing.” The Kings’ offense scored 153 five-on-five goals last season, only one goal off the high-water mark from the past decade.

“We’re really happy with some of the areas of our game last year,” he said. “We increased our scoring off the rush in a big way last year. We increased our scoring and we’re trying to get off the walls more and create more in the middle of the ice. We did that. But I think adding Jeff Carter back to your lineup for a whole year, we scored on the rush with Jeff out of the lineup all year. You add Kovalchuk to your lineup, who’s an elite scorer, and it gives you a weapon you never had before. Now you get some young guys in your lineup that have some experience under their belt like Kempe and Iafallo. We think we continue to trend up in that area in terms of creating more offensively in that area outside of the Kopitar line. There are some things we’re looking at that we think there are areas of the ice that we can take better advantage of. I don’t know if I want to say we want to do a whole lot ‘different’ but we want to do some things a whole lot better.”

-Stevens said he’s looking for consistency from Jonny Brodzinski. “You want to be able to put a guy in the lineup that you know exactly what you’re getting on a nightly basis. You don’t want to see a drop-off in his play,” he said, noting that it’s important for Brodzinski to be responsible and winning battles along the wall, which will help him spend more time in the offensive zone. The 25-year-old forward who is no longer waiver exempt was encouraged to get lighter. He was carrying 217 pounds at the end of last season – he’s still listed as 6-foot-1, 217 on the official camp roster – and, to his credit, via Stevens, Brodzinski got his weight down, and the team feels like he’s “stronger, quicker, more powerful and lighter weight than he was before.”

“We think Jonny can be a responsible player that provides secondary offense for our team,” Stevens said. Brodzinski, a point-a-game AHL forward last season, totaled four goals and six points in 35 games with the Kings.

-On Drew Doughty, and whether he needs to curb his explosive emotional outbursts: “I wouldn’t say he necessarily needs to ‘curb’ his enthusiasm, but there were a couple situations last year – and he’ll tell you this, and we’ve had the conversation here – that were outright unacceptable. I don’t have any problem saying he’s the emotional leader of our hockey team. He has great enthusiasm and he brings energy to your team. He loves being at the rink. Guys love having him as a teammate.”

Stevens referenced Game 5 against Phoenix in 2012, the game in which Doughty drew an overtime unsportsmanlike conduct penalty, and the Kings still went on to defeat the Coyotes to advance to the Stanley Cup Final. Still, most of these episodes don’t necessarily have a wrapped-up-in-a-bow, neat little ending. “I’d rather try and dampen the fire a little bit than try and light a fire to begin with,” Stevens said. “If a player doesn’t have any fire in his belly, sometimes you can never get it ignited, whereas a guy like Drew has so much fire that with his experience, it bothered him as much as it bothered us that it happened, and I think he’s well aware of it. He very much wants to be one of the leaders of our hockey team, and he has become one of those guys, and he knows as well as we all do that there’s a time and place for passion and emotion, but when it turns into frustration, it doesn’t help our hockey team. He knows that and he understands that, and it’s a process that we’re going through. He’s way ahead of where he was before. I would like to think as we move along that we can eliminate those situations altogether.”