The LA Kings announced last night that the organization will purchase and distribute emergency safety kits to local schools with the proceeds from yesterday’s Taste of the South Bay event. The event, held at the Shade Hotel in Redondo Beach, was expected to raise approximately $50,000, bringing the overall total of the event to nearly $400,000 in its ten years of operation.

From the Kings press release:

LOS ANGELES – The Los Angeles Kings and the Kings Care Foundation announced the club will use the proceeds from tonight’s Taste of the South Bay event to purchase emergency safety kits to equip South Bay classrooms.

During the event the Kings made the following special community announcement – all proceeds from Thursday night’s event will benefit children in local schools. The hockey club will work with the Police Chiefs and School Superintendents in Redondo Beach, Hermosa Beach, Manhattan Beach and El Segundo to equip South Bay Classrooms.

“Dr Keller and I are very grateful for the relationship we have with the LA Kings and the Redondo Beach Police Foundation,” said Chief of Redondo Beach Police, Keith Kauffman. “Their generous donations have given us the ability to put an advanced trauma kit in every classroom in the district and train every teacher and administrator on how to use them. The LA Kings have helped give our teachers, students and parents the confidence that we are doing everything possible to create the safest environment for our children.”

“We started this program last year in Redondo Beach and are thrilled to be able to bring these tools to the kids of El Segundo, Hermosa Beach and Manhattan Beach,” said Kings President and Hockey Hall of Famer Luc Robitaille. “Our goal would be to make sure all of the kids and teachers in Los Angeles have access to such an important tool.”

Tonight’s event is expected to raise approximately $50,000. To date, Taste of the South Bay has raised nearly $400,000 since its inception.
More than 15 South Bay restaurants participated in the event which featured more than 300 participants. Also in attendance were Kings players, alumni, broadcasters and staff members.

The 2018-19 Kings regular season begins at STAPLES Center on October 5 against the San Jose Sharks. 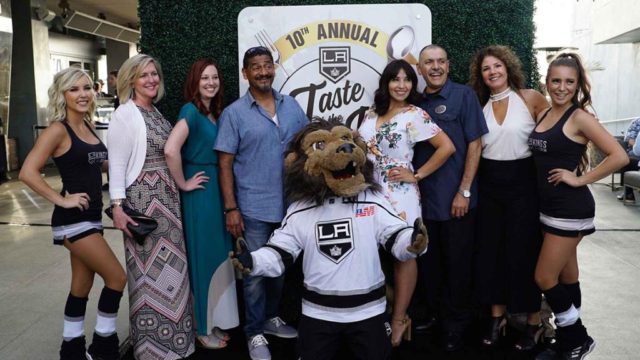