NOW, WHERE WERE WE? Happy trails, July 4, er, weekend. Five-day weekend. Are five-day weekends a thing? I think so. Six-day weekends aren’t. That’s essentially “a vacation.” Who here is happy that the first thought after an extended break is to categorize lengths of personal time? Anyone? I’ll let myself out.

THERE WASN’T MUCH NEWS SINCE WE LAST SPOKE. The list of players electing for salary arbitration was released Thursday. There were no Kings included. All arbitration cases were player-elected; no teams elected to go to arbitration this summer. Hearings will be held from July 20 through August 4. While we’re kinda on the subject, there’s a good chance we’ll get some new RFA contracts this week. Last year, the RFAs were done on Friday, July 15. Current L.A. RFAs are Paul LaDue, Alex Lintuniemi and Kurtis MacDermid. Amount of drama expected: none.

PROUD ALUMNI. Happy trails to Christian Folin, who came in for one season as a defensive-minded defenseman, did his job, played through a variety of blunt-force injuries, and will move on after signing a one-year, $800,000 contract with Philadelphia. That’s actually a decrease from the $850,000 contract he signed with Los Angeles last summer, but comes with a similar role: serve as a sixth or seventh defenseman, log tough D-zone minutes, kill penalties, score on Jusse Saros after faking him out with a rim-around. Well, maybe not that last part. Still, you’re not going to find many people who spent time with Folin last year who came away with any sort of negative impression.

Good luck to @ChristianFolin as he moves on to the @NHLFlyers Gave 100% every shift Showed respect to everyone he worked with.

Folin set career-highs with 65 games, three goals, 10 assists and 13 points last year. The Kings had done some water-testing around the trade deadline towards seeing what a hypothetical Folin trade could bring in return but chose to keep him on board for the entirety of the season. There were some whiffs that they would circle back to him after the initial rush of free agency. Ultimately, they did not trade a defenseman, and Paul LaDue is going to see his usage rise, so there just wasn’t a real, regular role for Folin to play. He’ll be a good fit with Philadelphia, assuming he latches on to that 6/7D role. 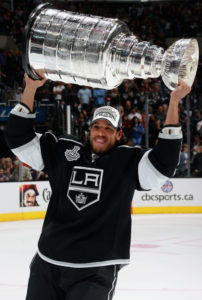 More comings and goings (mostly goings). The best of luck to Jordan Nolan, who signed a one-year, two-way contract in St. Louis that pays $650,000 with the big club and $250,000 if he’s assigned to the AHL. The Blues are familiar with him. Ditto to Toby Rieder, who signed a one-year, $2-million contract with Edmonton. He may be joined by Kevin Gravel, who signed a one-year, two-way contract with the Oilers that pays him $700,000 at the NHL level and $300,000 should he become enamored with the Bakersfield sound. Brad Richardson re-upped in Arizona for two years at $1.25M a pop and will provide excellent character leadership and good versatility at all three forward positions for a Coyotes team that appears ready to make some sort of step this coming season. (Don’t undersell Richardson’s importance to the collective heartbeat on the 2011-12 team. He wasn’t always in the lineup that year or the next but was an integral part of a special L.A. dressing room and now, though a divisional rival, remains close with his ex-teammates when he’s not called into duty against them.) It has been a really nice career for Richardson, who will hit 700 games played early in the 2018-19 season if he stays healthy. He’s coming off a three-goal, 15-point season in which he averaged 14:46 of ice time.

Elsewhere, Jeff Zatkoff signed a one-year contract with the DEL’s Straubing Tigers after a 17-game stint with the AHL’s Cleveland Monsters in which he posted a 3.22 goals-against average and an .885 save percentage after a mid-season trade from L.A. Nick Shore as of this morning is an unsigned restricted free agent who wasn’t qualified by Calgary. He is free to sign with any team.

BURROWS RETIRES. Well, this is bleak:

Sedins and Burrows all retire in 2018. Bieksa, Hamhuis, Hansen all still UFA. Kesler’s future uncertain. It appears to be the end of the line for the core of 2011 #Canucks. Time marches on

One last time, because A) there is no quota for the number of times viewing videos from a Stanley Cup run is acceptable and B) this was one of many Mike Richards Kind Of Has This Playoff Hockey Thing Figured Out moments from 2012, and easily the most iconic. Hockey fans may despise Burrows, but in my 20 years of interviewing athletes found him among the more genuinely friendly and approachable sorts in the dressing room after a morning skate.

I AM KEEPING THIS SHORT BECAUSE I AM ABOUT TO LEAVE FOR THE THIRD AND FINAL INSTALLMENT IN A ROOT CANAL PROCEDURE. Root canals: who needs ’em? (Me, apparently.) Today marks the third part in a three-part periodontist series, so let’s talk after the novocaine wears off. Enjoy your Monday, Insiders. After a quick break, it’s great to continue this conversation.