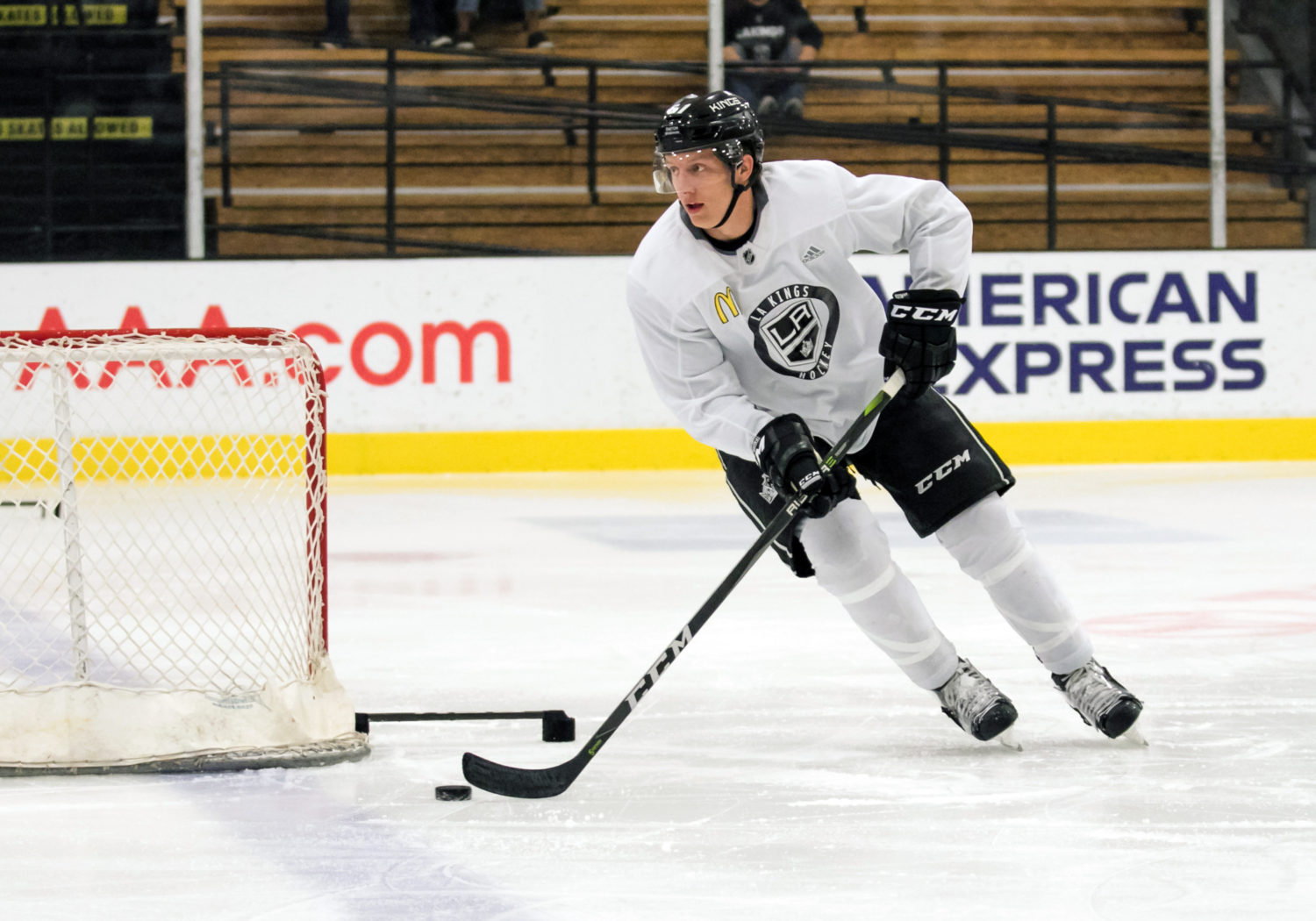 Black and white jerseys whiz by as players take the ice for a warm-up skate on the first day of Kings Development Camp. For most of the young skaters, this is their first time making a mark on Kings’ soil, but amongst the names on the backs of their jerseys, one familiar name stands out. Number 67 skates by in a crisp white jersey with the name Brodzinski emblazoned in thick black lettering across his back. It isn’t Jonny Brodzinski, the Kings’ 2013 fifth round draft pick who played a combined 41 games with the Kings in the past two seasons and posted 30 points in 29 games with the Reign this year, but his younger brother Easton. The familial tie becomes clear when 67 rips off one of the family’s trademark wristshots during an afternoon skills session.

“Easton is a really funny, outgoing kid,” said Mike Donnelly, player development. “Jonny is a little bit more reserved, and they’re different for sure—there’s no question about it. Lot of similarities on the ice, both have really good hands. Scorers, great shots—really, really good kids. Both of them are really good, you can tell they come from a really good family.”

After having settled into the second day of development camp, Easton says he’s already recognized some familiar faces, not only from having spent time with Jonny’s teammates—who enjoy playing the same video games such as Fortnite—but also from attending development camp last summer, as well. 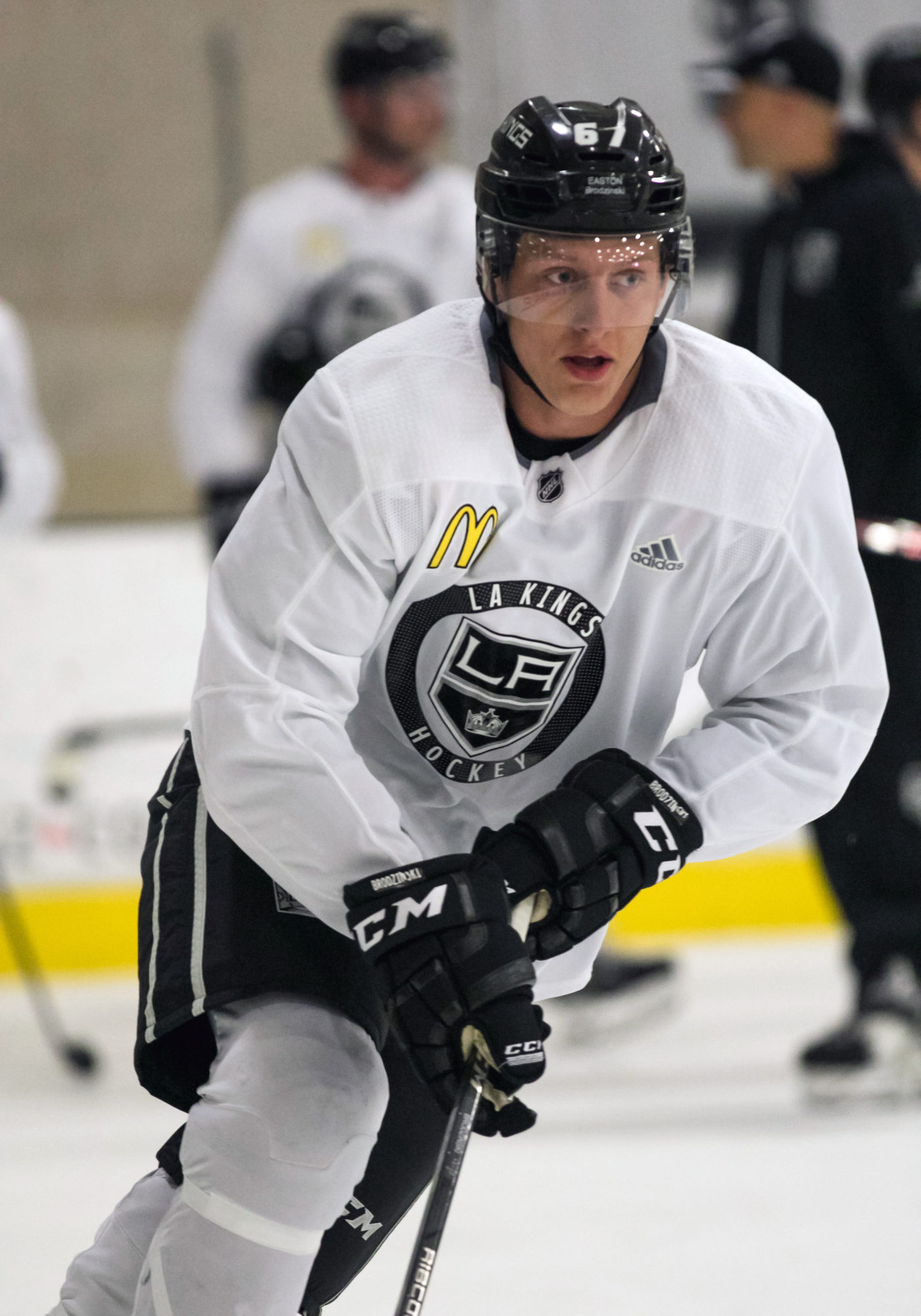 “It’s close to the same. It’s just a fun place to be at, you know?” Easton said. “I mean, I dreamed of playing here ever since my brother got drafted here, so it’s nice to be here. Having some guys already know me, it’s nice to have that and have some people to look up to when they’re here.”

A forward, Easton recently completed his freshman year at St. Cloud State, following in the family’s footsteps. Jonny also played with the Huskies, racking up 22 goals in his first season and leading all DI rookies in goals scored during the 2012-13 season. But Jonny and Easton aren’t the only members of the Brodzinski clan to have graced Huskies ice: at St. Cloud, the family name goes back more than thirty years to when Easton and Jonny’s father Mike and uncle Steve played with the team in the late 1980’s. During his senior year, Mike served as captain to a Huskies team that was coached by hockey legend Herb Brooks, who famously coached the 1980 United States men’s hockey team to Olympic gold, defeating the Soviet Union in the “Miracle on Ice” semifinal game.

Mike attends all of Easton’s games at St. Cloud and Easton says the two stay close—he often receives FaceTime notifications from his Dad after coming off the ice. When Easton committed to St. Cloud, his dad was ecstatic.

“He was really excited,” said Easton. “His picture is up on the wall in there and stuff like that. My uncle is up in there. So he’s a die-hard Husky fan. I love that about him.”

Of Mike’s four sons, all four have played, currently play, or are pursuing playing hockey at the Division I collegiate level, an impressive legacy even for the most devout of hockey-obsessed Minnesotans. The boys’ mother Kathy also stays close to the ice, managing the schedule at Schwan Super Rink – a 300,000-square foot facility that bills itself as the world’s largest ice arena with a massive eight sheets – and owns Hockey Central, the rink’s pro shop, where the family resides in Blaine, Minnesota.

“We grew up (on the ice),” says Easton. “When we were probably half a month old we were already on the ice, my dad was putting us around and stuff like that. I mean it was in our blood as soon as we were born.”

While Easton and Jonny both bleed Husky red like their father, their two brothers Michael and Bryce have ties to the University of Minnesota. Michael, currently skating for the San Jose Barracuda and in the pipeline for the San Jose Sharks, played three years of NCAA hockey with the Gophers. Bryce, the youngest Brodzinski, is an alternate captain for Blaine High School’s hockey team. After initially committing to St. Cloud, he’ll instead join the Gophers for the 2019-20 season, where he’ll be coached by St. Cloud alum Bob Motzko, who played alongside their father and coached both Easton and Jonny as Huskies.

“It’s extremely difficult to have four boys out of one family and playing all really good programs, too,” Donnelly said. “But they’ve got good genes there somewhere and they’re really nice boys, hard workers.”

Eyssimont remains “really close” with the Brodzinski family. “I’ve actually known Jonny a little bit longer than Easton, Easton and I played together all last season and his two brothers and I work out in the summer with (Kevin) Gravel as well, so we see each other every day and shoot pucks, play soccer, and it’s a good time.”

It’s a fifty-fifty split with two Huskies and two Gophers in the Brodzinski brothers clan, but besides some friendly familial cajoling, Easton says there isn’t much competition amongst the four for bragging rights.

“A little bit, but not too much,” Easton said of the brotherly rivalry. “It’s just fun to compete with each other, but at the end of the day, we’re still family. So we leave it on the ice.”

Two years ago, at the conclusion of the Kings season, Easton visited Jonny in L.A. where the two spent time together before the embarking on a road trip through Montana and Yellowstone on their return to Minnesota. The four brothers keep in touch via group texting and often chat through Xbox. Following the end of development camp, Easton will be heading back to Minnesota to join the rest of his family for Jonny’s upcoming wedding in July. Jonny’s success within the Kings organization is a constant inspiration for his younger brother. When asked, out of any NHL player, who he models his game after, Easton pauses for a beat before responding.

“Honestly, my brother,” said Easton. “I mean he’s a huge impact in my life. I always try to mimic his shots and stuff like that. He’s got an unreal ability to shoot the puck so I always try to get little tips and tricks from him whenever I can. So it’s definitely him.” 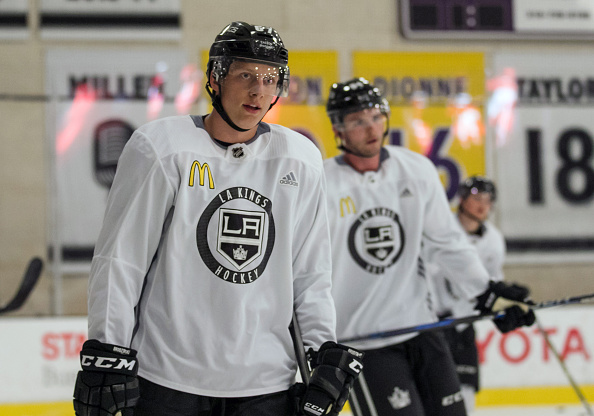